One of America’s most exclusive clubs has grown, and outdoor lovers in particular should take notice. The National Park Service has recently added four new national parks. The newest, New River Gorge National Park and Preserve in West Virginia, got its status upgrade in December 2020. It’s well deserved.

During a two-day visit earlier this year, I hiked into steep river gorges, explored railroad ghost towns, and walked a bridge catwalk suspended more than 800 feet above the gorge, one of the coolest national park adventures I’ve ever experienced.

The NPS oversees 423 properties, including historic sites, monuments, recreation areas, and lakeshores, but only 63 are national parks, a designation that requires congressional approval and brings higher visibility and more visitors.

At Indiana Dunes, visitation spiked just weeks after the park gained its new status. “It began almost immediately,” said supervisory ranger Bruce Rowe. “We started getting emails to the visitors center saying, ‘We want to come.’ ”

It was the same at the other parks. Kelly Carroll, the ranger in charge of interpretation at White Sands, says the reason is simple: “We’re now on a lot of bucket lists.”

If you’re planning a visit to New River or one of the other new national parks, here’s a quick guide to help make the most of your trip.

The nation’s newest national park has an ancient history. The New River Gorge preserves one of the oldest rivers on the planet, and its gorge, which stretches along the waterway for more than 50 miles and reaches depths of 1,600 feet, is, well, gorgeous. From the park’s Grandview Visitors Center this spring, I could clearly see how over hundreds of millions of years the river had cut a serpentine path through the thickly forested Appalachians, exposing deep canyon walls.

The park also has a rich cultural history. From the 1890s to the early 1970s, its steep river hillsides boomed with coal mines that fueled the nation’s steel mills and steam trains. As I explored, I was often surprised to find abandoned smelters, coal tipples, and processing ovens slowly being reclaimed by the forest.

Visitors also come for some of the country’s best whitewater rafting, rock climbing, and hiking on dozens of well-marked paths through pine forests and rhododendron thickets that erupt in blossoms every May through June. I hiked several routes, including the deceptively short but strenuous Kaymoor Miners Trail, which ends with a thigh-busting stairway leading 821 steps down to the riverbank–and then back up. Although the hike was just 2 miles round-trip, I certainly felt it the next day. By contrast, the Endless Wall Trail offered a gentle path to the canyon’s edge, providing beautiful views of the New River Gorge Bridge. 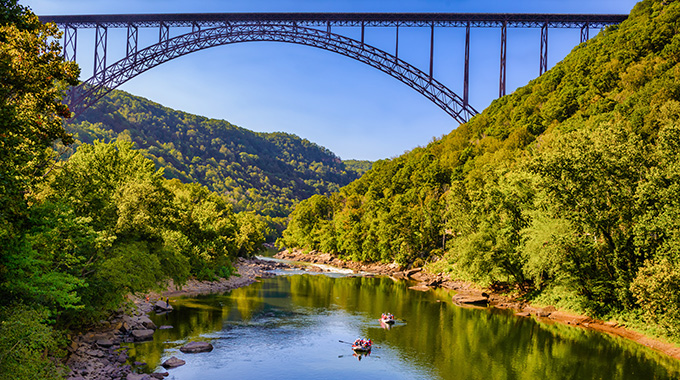 On my last day at the park, I saw the crossing up close on a bridge walk, a small-group tour priced from $72. At more than 3,000-feet long, the bridge is the largest single-span arch bridge in the Western Hemisphere. The path follows a 2-foot-wide steel catwalk suspended under the roadway, about 850 feet above the river’s surface. (That’s taller than the Statue of Liberty and the Washington Monument stacked atop each other.)

All participants must wear a harness and clip on to steel cables, which for me at least eliminated any sense of danger. Instead, I could marvel at the views of the river and the mountains and feel the brisk breeze surging through the gorge. When a freight train announced itself with a mournful horn blast, I stopped to watch its progress. It looked like a toy as it chugged slowly through the canyon far below.

Don’t miss: The almost-abandoned railroad town of Thurmond. A little more than a century ago, about 95,000 train passengers visited in a single year. Today, visitors see empty buildings, including a hotel and the former National Bank of Thurmond, whose window still promises depositors 3 percent interest on savings.

Where to stay: The park has no lodging, but privately owned Adventures on the Gorge looks just like a national park property, complete with cabins, and camping. (855) 379-8738; adventuresonthegorge.com/lodging.

Where to eat: Fayetteville’s Cathedral Café has a hip, coffeehouse vibe, and serves sandwiches and salads.

Or try Wanderlust Creative Foods for Indian dishes and other global cuisine.

Visitor tip: If you don’t hike, you’ll love driving Fayette Station Road, which winds down through the gorge. 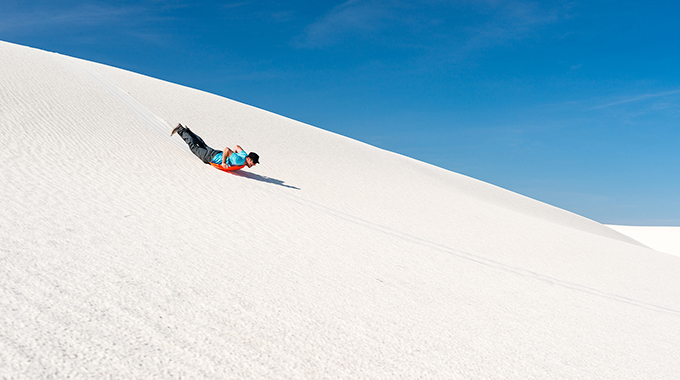 Sledding down a dune in White Sands National Park. | Photo by blurMEDIA/stock.adobe.com

The world’s largest gypsum dune field not only looks otherworldly, but also provides a thrill–a wild sled ride down its towering hills. Sliding down the dunes is so popular that area stores (including one near the entrance) sell saucer-shaped sleds year-round; some hotels also lend them out. Remember to wax the bottom, which makes for a faster descent. You’ll find one of best sledding spots near the Backcountry Camping Trail parking lot.

The park also makes for great hiking, exploring, and camping. Whatever you do, take time to let the fine sand run through your fingers. The grains are softer and cooler than common ocean beach sand, which is silica.

Try to time your visit to the late afternoon to catch one of the park’s legendary sunsets, with pastel shades reflecting off the sands.

Where to stay: In the gateway town of Alamagordo, Classic Desert Aire Hotel provides lodging in a renovated ‘50s-style motel. (575) 437-2110; theclassicdesertairehotel.com. Home2 Suites by Hilton is expected to open this spring. (575) 437-1913; hilton.com/en/hotels/elpanht-home2-suites-alamogordo. Before the pandemic, primitive backcountry camping was available in the heart of the park’s dunes (spots fill early in the day).

Where to eat: A park store stocks limited convenience foods. In Alamogordo, try New Mexican green and red chile at CJ’s Si Señor, or head to 575 Brewing Company, where you can often find food trucks and an outdoor stage with entertainment.

Visitor tip: Time your visit for the park’s full-moon walks. The sand glows nearly as bright as day. 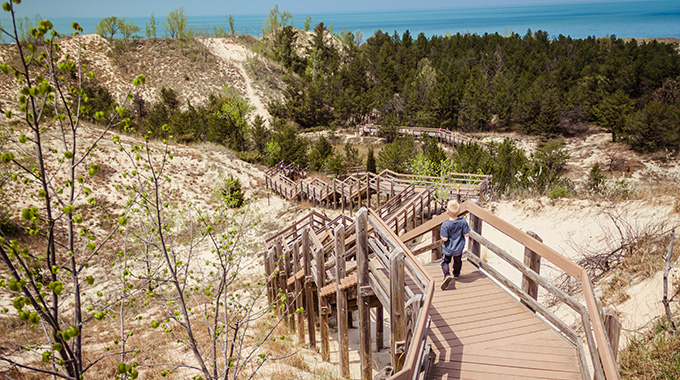 A boardwalk leads down to a dune at Indiana Dunes National Park. | Photo by Jon/stock.adobe.com

Just 45 minutes from downtown Chicago, Indiana Dunes offers a surprising natural getaway in the heart of the industrial Midwest. The park, which stretches 20 miles along the southern tip of Lake Michigan, has multiple entrances. Your first stop should be the visitors’ center in Porter, Indiana, to pick up a map and get oriented.

The dunes, which can tower higher than a 10-story building, attract summer crowds, and most head to West Beach, which has a bathhouse and lifeguards. For solitude, try Cowles Bog Beach, reached only by boat or a 3-mile round-trip hike. The adjacent Indiana Dunes State Park also has a popular strand.

Indiana Dunes is one of the most biologically diverse national parks, with 1,100 native plant species, including orchids. And 348 bird species have been spotted here. Leave time to wander Miller Woods, one of the country’s few remaining black oak savannahs, with widely spaced trees set among gentle dunes.

Where to stay: Sleep in a caboose or a former train station at Riley Railhouse Bed and Breakfast in Chesterton. (219) 395-9999; rileysrailhouse.com. Or stay in Michigan City’s Blue Chip Casino Hotel Spa. (888) 879-7711; bluechipcasino.com. The park’s Dunewood Campground can be reserved six months in advance; no electric hookups. 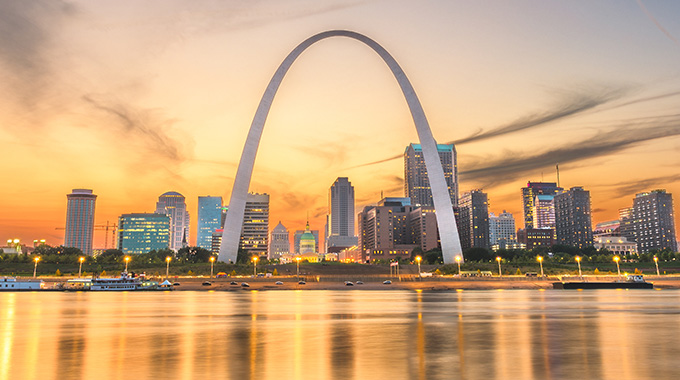 One of the country’s first urban national parks provides something you won’t find at any other: a chance to celebrate futuristic architecture.

Located on the bank of the Mississippi River, the St. Louis park centers on the 630-foot steel arch designed by Finnish architect Eero Saarinen and completed in 1965.

The must-do experience is a tram ride up one of the monument’s legs to the observation platform. Trips can sell out early in the day, so purchase your ticket online beforehand. (Adult tickets cost $12 to $16, depending on the season.) When I visited several years ago, I arrived after trips had ended for the day. I had to settle for a view looking up at the structure from the ground and not out over the city from the top.

Tram cars, which hold up to five people, can be snug. If you’re prone to claustrophobia, first take a seat in a replica car in the lobby to see how you feel.

But don’t just gawk and go. The Arch was built to honor the nation’s western expansion, and a new park museum explores the complicated history from the perspective of pioneers and Native Americans.

The 91-acre park also includes the Old Courthouse, where the Dred Scott case was heard before it went to the U.S. Supreme Court. The latter’s landmark 1857 ruling declared the Missouri Compromise void and denied citizenship to Black Americans. The Old Courthouse is closed for renovations now, but when it re-opens, exhibit galleries will explore the notorious case.

Don’t miss: The 30-minute introductory film, Monument to the Dream. It was nominated for an Academy Award in 1968 and is worth the extra charge.

Where to stay: The boutique Hotel St. Louis, a newly renovated building designed by famed Chicago architect Louis Sullivan. (314) 241-4300; marriott.com/hotels/travel/stlak-hotel-saint-louis-autograph-collection. Or consider The Last Hotel, built in a former shoe factory. (314) 390-2500; hyatt.com/en-US/hotel/missouri/the-last-hotel/stlub. RVers can camp across the river in Illinois at Casino Queen RV Park. (800) 777-0777; draftkingsatcasinoqueen.com/stay/rv-park.

Where to eat: Get a taste of St. Louis barbecue at Sugarfire Smoke House.

Bailey’s Range is celebrated for its burgers, and Pi Pizzeria’s cornmeal crust is legendary.

Super souvenir: A desktop Arch made from repurposed tram cable.

Charlottesville, Virginia, writer Larry Bleiberg is president of the Society of American Travel Writers. He has visited every U.S. state, and is now considering seeing all the national parks, too.