By Barbara and Jim Twardowski

Nothing reignites a relationship with the one you love like a romantic getaway. Whether you are celebrating Valentine’s Day or simply need to escape together, these six destinations deliver a variety of rejuvenating adventures.

Some hotels offer special packages for Valentine’s Day—or any time of year—created just for couples. Check the hotels’ websites or call for details. A bottle of champagne or a plate of chocolate-dipped strawberries delivered to the room always adds a dreamy touch to any getaway. But simply spending time together can be the best part of any romantic retreat. 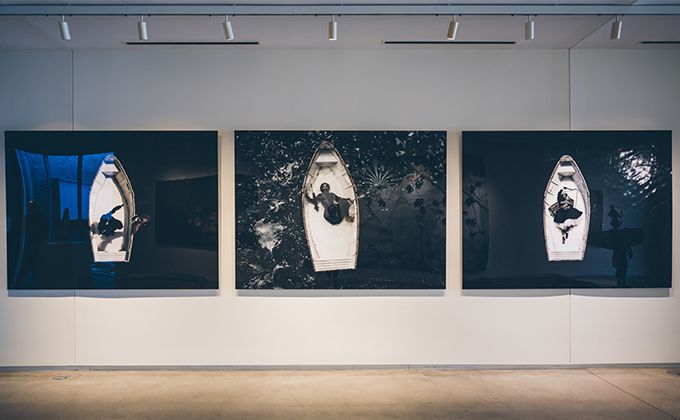 To be inspired by some of the nation’s most impressive artistic treasures, book a stay at 21c Museum Hotel Bentonville in this small northwest Arkansas town that’s nestled in the Ozark Mountains. Located just off downtown’s historic square, the hotel itself is a contemporary art museum where natural light bathes its gallery spaces, and high ceilings and polished concrete floors evoke a modern vibe. The pet-friendly guestrooms feature original artwork, Malin and Goetz bath products, and complimentary Wi-Fi. Novice and experienced bicyclists have access to an abundance of trails, and you can end the day with a romantic in-room dinner from The Hive. The hotel’s restaurant features refined country cuisine by Arkansas native and James Beard Foundation Award semifinalist Matthew McClure.

Within walking distance of the hotel, the Crystal Bridges Museum of American Art (crystalbridges.org) showcases an impressive combination of nature, art, and architecture. The museum’s permanent collection spans five centuries of masterpieces. Stroll past the works of Norman Rockwell, Georgia O’Keeffe, and Andy Warhol. The museum’s 120-acre campus includes winding trails that feature outdoor art, as well as Frank Lloyd Wright’s Bachman-Wilson House. Museum admission is free, so splurge on gifts at the Museum Store. 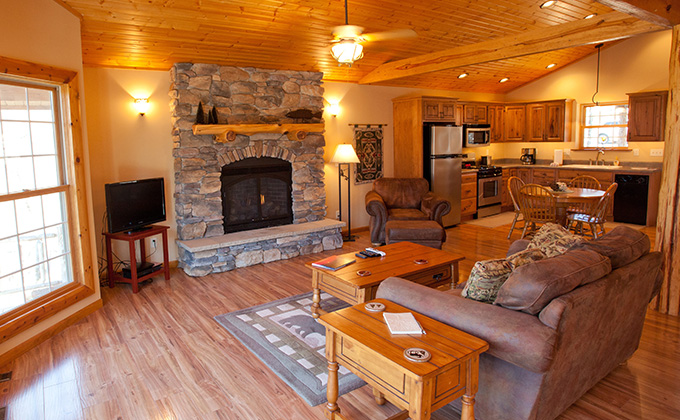 About 5 miles southwest of Carbondale, the Woodland Cabins are tucked on the edge of the Shawnee National Forest. Guests who book one of the four upscale cabins share the secluded 44 acres with deer, red foxes, wild turkeys, and pileated woodpeckers. Designed for couples, the cabins sleep only two people and come with a hot tub, gas-log fireplace, outdoor fire pit, and private deck. A full kitchen, television, DVDs, linens, and barbecue grill complete the amenities. Three of the cabins have views of the 3-acre pond.

The Woodland Cabins are located along the 40-mile-long Shawnee Hills Wine Trail, home to 11 vineyards. The area also offers golfing, hiking, and biking. Excellent fishing awaits at the nearby lakes and state parks, including Giant City State Park (tinyurl.com/gcsp-il), so named because its massive sandstone bluffs and corridors framed by sheer cliff faces resemble the streets of a giant city. After returning to your cabin, listen to nocturnal sounds under an unobstructed view of the stars.

3. Lap of luxury in Indiana 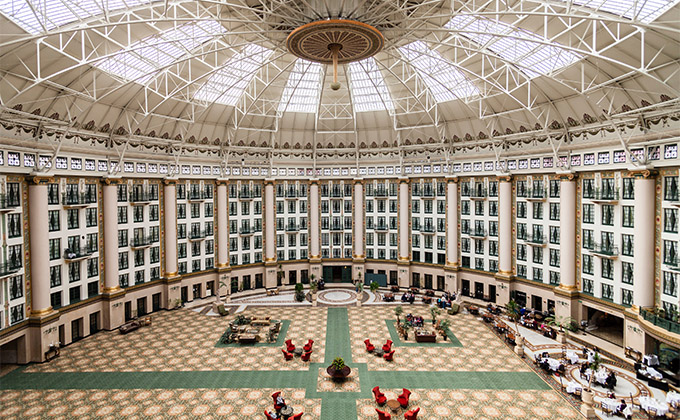 Dating to 1902, West Baden Springs Hotel was once dubbed the “Eighth Wonder of the World” for its dramatic domed atrium. | Photo by Ian McSpadden/French Lick Resort

One hundred miles south of Indianapolis, the French Lick Resort boasts two historical hotels connected by an authentic 1930s trolley. Both properties have undergone extensive restorations and are AAA Four Diamond hotels. Originally established in 1845, the French Lick Springs Hotel’s gold-leafed lobby, marble columns, and mosaic floor create a grand entrance. Located just one mile away and dating to 1902, the West Baden Springs Hotel exudes European luxury and features a jaw-dropping atrium that at 200 feet across and 100 feet tall was once the world’s largest free-standing dome.

Get plenty of sleep, because there’s a host of activities to fill your romantic getaway. Resort guests can try their luck at the casino, ride horses, golf, relax at the spa, bowl, swim in indoor pools, hike, shoot clay targets, take nature walks, ride bicycles, exercise in the fitness center, tour the hotels and grounds, and shop. For an enchanting evening, make reservations at the French Lick Springs Hotel’s 1875: The Steakhouse. Ask for a table overlooking the beautiful formal garden. 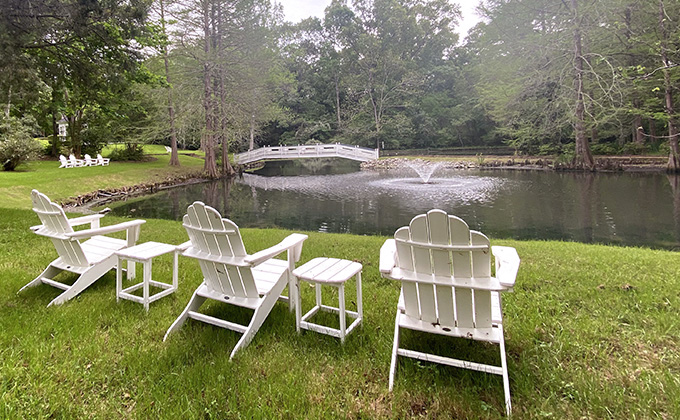 Sitting on 26 acres of manicured gardens in Natchez, the AAA Four Diamond Monmouth Historic Inn and Gardens welcomes couples for relaxing stays at this two-century-old estate. Stroll the grounds of this National Historic Landmark in search of 15 angel statues, stop for photos at the gazebo, and cross the bridge over a pond where ducks frolic. Spring wisterias bloom on a pergola located between the rose garden and croquet lawn. All of the rooms and suites in the main house and the seven outbuildings have period furnishings or reproductions, and some include a spa tub and a fireplace. The on-site Restaurant 1818 takes its name from the inn’s founding year.

Book a horse-drawn carriage ride to see the sights in Natchez, where more than 1,000 structures are listed on the National Register of Historic Places. Tour Longwood Mansion, America’s largest octagonal house. Construction began in 1860, and although the exterior and basement were finished, the Civil War halted work and the five upper levels were never completed. For a front-row view of a fabulous sunset over the mighty Mississippi River, snag a seat on the porch of the Under-the-Hill Saloon. 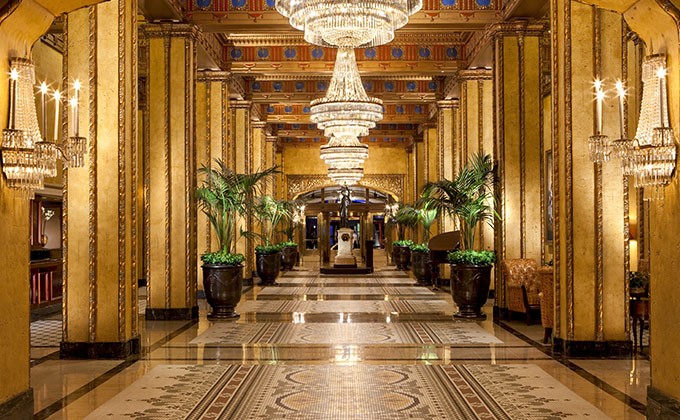 Oozing with old-world charm, New Orleans delivers a European-inspired romantic getaway. For a home base, choose The Roosevelt New Orleans, A Waldorf Astoria Hotel. Built in 1893, the AAA Four Diamond property features a block-long lobby with sparkling crystal chandeliers, mosaic tile flooring, and a 10-foot-tall museum-quality clock. Book a detox massage at the Waldorf Astoria Spa’s couples treatment room or lounge beside the rooftop pool. Unwind with a signature cocktail at The Sazerac Restaurant.

Once settled, admire the French Quarter’s architecture, stop at the antique and art shops along Royal Street, and sip libations at the Hotel Monteleone’s rotating Carousel Bar. Pose for a picture in Jackson Square near the magnificent St. Louis Cathedral (stlouiscathedral.org), one of the country’s oldest cathedrals. Ride the St. Charles streetcar past turn-of-the-century mansions.

Inside New Orleans City Park, two of New Orleans’ beloved attractions are the New Orleans Museum of Art and its Besthoff Sculpture Garden (noma.org). Lovebirds can sip champagne while riding a Venetian gondola through the park’s lagoons before dining at one of the city’s romantic restaurants. Try contemporary Creole cuisine at Muriel’s Jackson Square or French fare at Café Degas. Indulge in fine dining at the Rib Room inside the Omni Royal Orleans. Have a nightcap in a rooftop bar at either Above the Grid at the NOPSI Hotel or Hot Tin at the Pontchartrain Hotel. 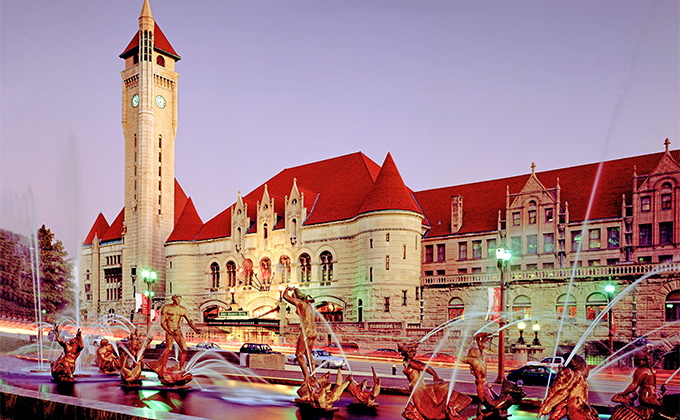 Inspired by the towering stone walls of the medieval French fortress in Carcassonne, architect Theodore Link designed the magnificent St. Louis Union Station in the late 1800s. Once one of the world’s busiest passenger rail terminals but no longer in operation, the landmark is home to the AAA Four Diamond St. Louis Union Station Hotel, Curio Collection by Hilton, which completed a massive transformation several years ago. With a nod to its history, some guestroom floors are designed and furnished with a railroad theme. The building is as spectacular and ornate on the inside as it is on the outside. The historic Grand Hall, home to a stylish bar, serves as its centerpiece with a 65-foot barrel-vaulted ceiling, gold-leaf accents, Romanesque arches, and stained-glass windows.

The hotel is not far from a host of downtown attractions, including the Gateway Arch, National Blues Museum, and Ballpark Village, which features restaurants and entertainment venues next to Busch Stadium. But just steps from the hotel in the Union Station complex, several not-to-miss experiences include the St. Louis Aquarium, home to a 250,000-gallon shark habitat and other fish and animal encounters, and the St. Louis Wheel, a 200-foot-high observation wheel with 42 enclosed gondolas that provide amazing skyline views. There’s also miniature golf, a ropes course, carousel, and more.

Barbara and Jim Twardowski, who recently celebrated their 40th anniversary, are contributors from Mandeville, Louisiana.