While recovering from an illness in the late 1800s, Harold Bell Wright sought physical and spiritual healing in the Ozark Mountains, and the preacher-turned-author came to love the region’s beautiful hills and hollows and the simple, country folks who inhabited them.

Inspired by his time there, he penned Shepherd of the Hills, a fictional account of joy, sorrow, violence, and restoration that became one of the first novels to sell 1 million copies in the United States. After it was published in 1907, readers began flocking to the Ozarks to experience the lovely scenery and hospitable people that Bell described. And they haven’t stopped coming.

Although some debate the boundaries of the Ozarks, most agree that this undulating, cozy quilt of peaks and valleys covers large areas of Missouri and Arkansas, while taking a slice of northeast Oklahoma and even a bit of southeast Kansas.

Yet the heart of the Ozarks stretches from southern Missouri across the border into northern Arkansas. Dramatic byways of curving roads cut through rolling hills and dense forests to towns that range from rural villages to entertainment meccas to Victorian hamlets. On an Ozarks road trip, let’s see where those scenic routes take us.

Springfield, Missouri, is often referred to as the Queen City of the Ozarks. The region’s largest city offers a modern take on life in the mountains and provides a good jumping-off point for Ozark explorations.

Head southwest about 60 miles to Cassville, a town with a long history as a stop on trails and trade routes. From there, connect onto State Highway 112 and the road to Roaring River State Park—one of the state’s top trout-fishing sites.

Set in a deep, narrow valley surrounded by rugged landscape, the park holds trout season from March 1 through October 31, with catch-and-release fishing permitted the rest of the year.

As you continue your journey, if you want to play it safe, take State Highway F from the park to State Highway 86 and head toward Eureka Springs, Arkansas.

But if you’re up for a little adventure, consider driving the Sugar Camp National Forest Scenic Byway across wooded hills through a portion of the Mark Twain National Forest. An 8-mile unpaved section is well-maintained and suitable for any type of car in good weather.

Breathtaking vistas of wooded hills and sprawling valleys are the reward for choosing this slower route. The midway point even offers a couple of picnic tables—an ideal location for an alfresco meal.

Once you return to the paved road, the scenic byway soon ends and you’ll reconnect with Highway 86 and head south. A few miles before reaching Arkansas, turn onto State Highway P, and when you cross the state line, you’ll be on Arkansas State Highway 23.

Traverse a lovely collection of switchbacks through the Boston Mountains, which contain some of the Ozarks’ highest peaks. When traffic becomes heavy, chances are you’re getting close to Eureka Springs, where the entire downtown area is listed on the National Register of Historic Places and brims with art galleries and eclectic shops. 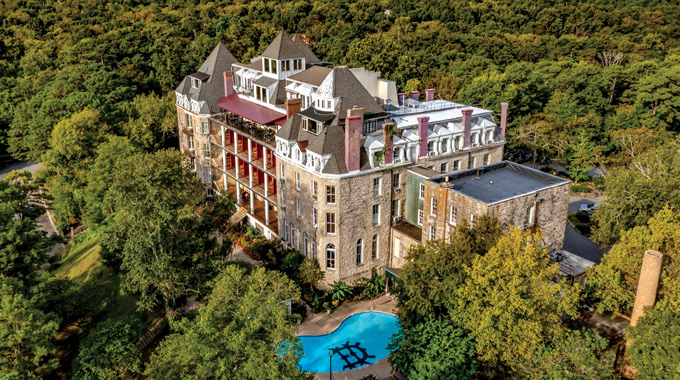 For overnight accommodations, take advantage of the town’s history by staying at either the 1886 Crescent Hotel & Spa perched high above the town or the Basin Park Hotel in the heart of the shopping and dining district. Rates for both start at $159. In addition to having been around for more than a century, both offer spas and ghost tours.

After you settle in, put on your walking shoes, explore the town, and admire an abundance of Victorian homes adorned with curlicue trim and vibrant paint schemes. Even if you decide to use the trolley ($6 for an all-day pass), it’s almost impossible to avoid climbing some hills and stone steps. In early spring, the trolley operates Tuesday through Saturday; it runs daily from May through October. 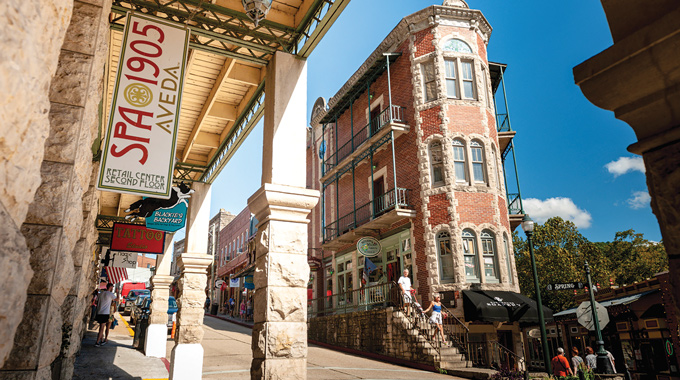 Founded in 1879, the town grew quickly as travelers spread the word about its healing springs. More than 60 are in town, and parks and gardens have cropped up around several of them. At Crescent Spring Park next to the Carnegie Library, for instance, you’ll find a Victorian-style gazebo near the spring.

Take a quick detour from town on US Highway 62, also known as West Van Buren, to see Thorncrown Chapel, a 48-foot-tall glass-and-wood gem with 425 windows that nestles into its natural surroundings. E. Fay Jones, an Arkansas native and apprentice of Frank Lloyd Wright, designed the masterpiece and affectionately dubbed Thorncrown’s style “Ozark Gothic.” Admission is free, but donations are welcome.

Down by the river

Getting on the road early as you continue south on Highway 23 has its benefits, including the sight of wispy mists floating over Ozark valleys and dancing around the peaks before dissipating with the late-morning sun.

About 21 miles south of Eureka Springs, you can loop through Withrow Springs State Park, where dogwood-studded trails invite you to enjoy more intimate views of the unspoiled Ozarks. Named after a settler from the 1830s, Withrow Spring gushes from a small cave at the foot of a bluff, and you can dip your toes in the 54-degree water for a startling wake-up stronger than any cup of coffee.

As you head farther south, turn east on State Highway 74 toward Kingston, and then take State Highway 21 southeast to the Buffalo National River—named America’s first national river in 1972. The National Park Service manages 135 miles of the river and more than 95,000 acres of adjacent land. 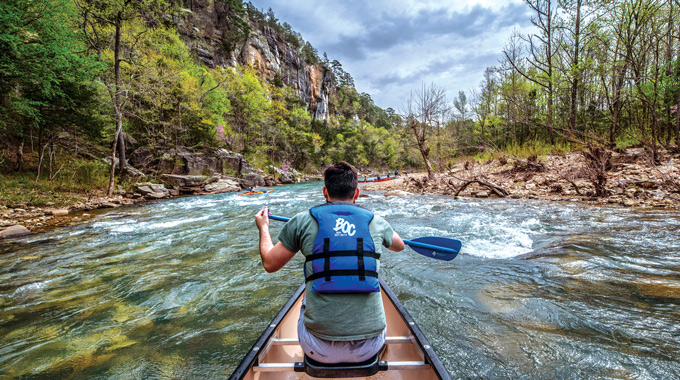 Heading east on State Highway 43, which meets State Highway 74, look for the elk herd in the Boxley Valley area, and keep your eyes peeled for the majestic animals crossing the road. In addition to wildlife viewing, Buffalo River offers many outdoor activities, with float trips and hiking among the most popular. Spring is the best season for floating the river, which skirts sandstone bluffs in some places up to 500 feet tall.

More than merely a collection of scenic recreation areas, the Ozark region holds tight to its heritage with old homesteads perched near water sources and small cemeteries providing a record of early settlers. You’ll find several examples of these in the Buffalo National River area, including the cabin of James A. “Beaver Jim” Villines at Ponca and the 1840s-era Parker-Hickman Farmstead near Jasper.

Fuel up for more exploring in Jasper on Highway 74 at the Ozark Café, one of Arkansas’ oldest restaurants and famous for its chocolate gravy. For a meal with a view, sink your teeth into a catfish po’boy at the Cliff House Inn about 6 miles south of Jasper on State Highway 7. The restaurant hugs the side of a mountain looking out over a segment of the Ozarks dubbed Arkansas’ Grand Canyon. 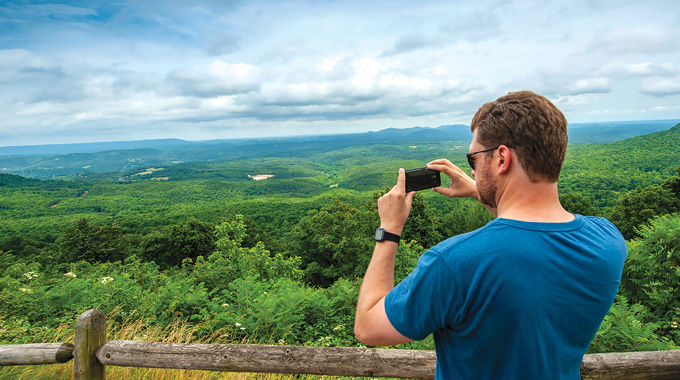 Back on the road, Highway 74 takes you to State Highway 84 before you reach State Highway 123 near Hasty. To discover another iconic Ozarks town, follow it to US Highway 65 and head south, and then take State Highway 66 east to aptly named Mountain View.

Like Eureka Springs, Mountain View sprang up in the 1870s and soon became the unofficial guardian of Ozark Mountain music and folkways. The town’s annual Arkansas Folk Festival—this year April 15–16 and celebrating its 60th anniversary—presents handmade craft vendors and plenty of old-time folk, mountain, and bluegrass music. Or if it’s Saturday night and the weather is warm, you may be in for a treat as local musicians occasionally gather around the town square to do some pickin’ and strumming. 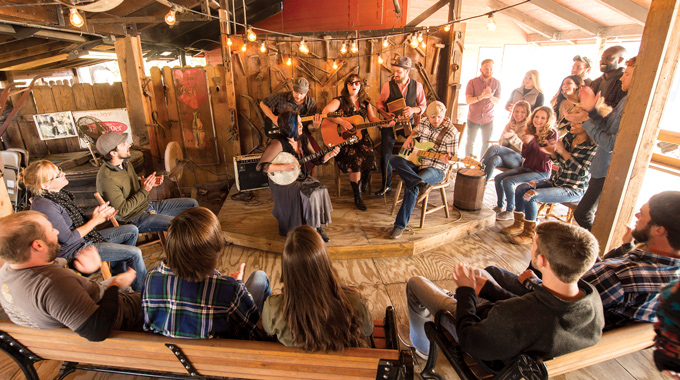 Discover more about Ozark culture at nearby Ozark Folk Center State Park, which is open from mid-April to late October. You’ll see artisans at work and hear mountain musicians. Sample Southern fare in the Skillet Restaurant, and you can even stay overnight on the grounds in a cabin.

After soaking in Ozark culture, it’s time to cross that state line again to Branson, Missouri, where an expansive Vegas-style entertainment district overflows with live shows and family-oriented activities.

Retracing your route to US 65 will get you there fastest. But if you’re not in a hurry, Arkansas Highway 14 curves through forests of oak, hickory, pine, and cedar. As you top each hill, another great view awaits, and many of them include water. This option allows you to consider a detour onto Arkansas Highway 125 for a close-up view of Bull Shoals Lake.

In fact, the road temporarily stops at its edge. Peel Ferry, Arkansas’ last public ferry, will carry you and your car across the lake. Continue on Highway 125 on the other side of the lake and cross into Missouri. In Reuter, veer west on US Highway 160, and then State Highway 76 will take you the rest of the way.

In Branson, step back in time to the 1880s at Silver Dollar City theme park. Take a spin on the Branson Ferris Wheel, which once sat on Chicago’s Navy Pier but has given Branson visitors another view of the Ozarks for the last 6 years. And you can even watch the Shepherd of the Hills story come to life in an outdoor theater on the land that inspired Wright’s novel. 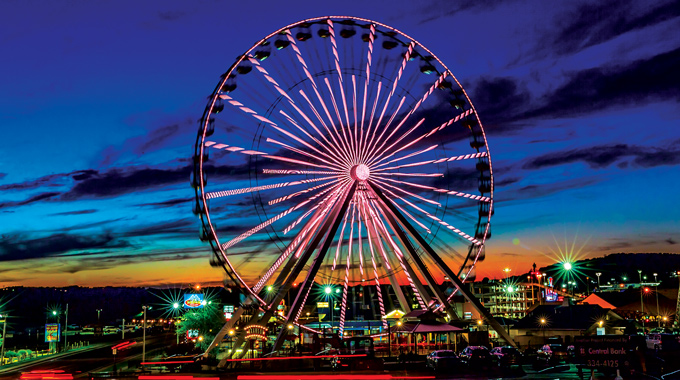 Relish great views of the Ozarks from atop the Branson Ferris Wheel. | Photo courtesy ExploreBranson.com

For a comfortable night’s stay, check into the AAA Four Diamond Chateau on the Lake Resort Spa & Convention Center on the shore of Table Rock Lake. Rates start at $179. Many of the rooms have private balconies that overlook the lake and surrounding Ozark landscape.

As you watch the sun dip below the mountains, you may notice that your shoulders have relaxed and there’s a smile on your face. More than just a beautiful place, the Ozarks will envelop you in a simpler way of life along its byways and in its small towns.

Karen Gibson is a contributor from Norman, Oklahoma.