Forest bathing in Texas: As easy as a walk in the park

On a sunny Saturday morning in the William Goodrich (W.G.) Jones State Forest north of Houston, visitors who’ve left their phones behind walk at a slow pace as they listen to the call of a red-cockaded woodpecker and feast their eyes on the forest’s multiple shades of green.

They’ve come to engage in the Japanese practice of shinrin-yoko, or forest bathing. Also known as forest therapy, forest bathing is a slow, sensory-based walk through nature. At W.G. Jones, a guide leads walkers past longleaf and loblolly pine, cedar trees, and smatterings of wildflowers, inviting them to take in sights, smells, sounds, and sensations—a fragrant flower, the crunch of gravel under sneakers, the roughness of tree bark.

The concept of forest bathing became popular in Japan in the 1980s as research showed that overworked employees who spent time meandering through forests experienced lower heart rates, blood pressure, and stress hormones.

Dr. Qing Li, the world’s foremost expert in forest medicine, says never before have people been so separated from nature. The average American spends 90% of their time indoors. But even short periods of time in nature can boost mood and enhance wellness, he says. Over the years, much research has confirmed forest bathing’s mental and physical health benefits, including better sleep and concentration, less anxiety, and a stronger immune system, Li adds.

Soak in the nature with a forest immersion walk with Conservation Conexions. | Photo by Mary Le Gassick/@le.gassique

“We’re in our heads all day, every day, and we don’t allow our bodies to reboot,” says Tamberly Conway, founder and CEO of Conservation Conexions, a Shallowater, Texas–based forest therapy consulting company. “When we reconnect with the natural world, it opens us up in so many ways. Texas is just now stepping into this world.”

Conway, who previously worked with the USDA Forest Service Conservation Education Program in Washington, D.C., is certified as a forest therapy guide through the Association of Nature & Forest Therapy (ANFT). Forest therapy not only helps people, she says, but forests, too, since it brings people outdoors, where they gain a deeper appreciation of and connection with nature.

Forest bathing is typically done in moderate weather. Participants should wear comfortable, sturdy shoes and leave their electronics behind. Walks usually last about 1 to 2 hours.

Forest bathers follow a specific sequence. First, guides invite participants to pause and notice elements of nature using all their senses. Then, each person sits and observes nature. Group members share their experience, and the walk ends with tea. ANFT recommends that guides brew tea using plants found in their local forest. 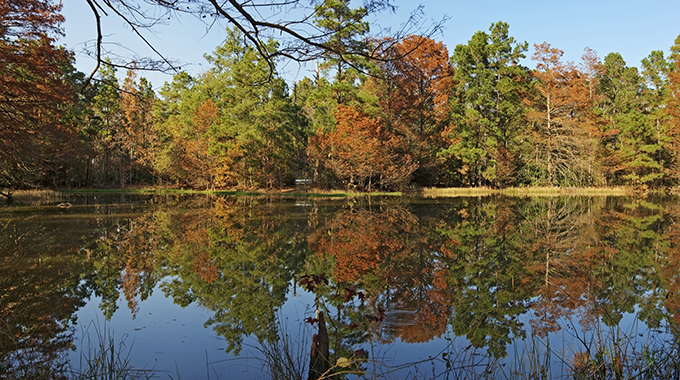 W.G. Jones State Forest in Conroe is a popular site with forest bathers. | Photo by Photosbyjam/stock.adobe.com

Japan now has 65 shinrin-yoku forests, designated by the Tokyo-based Forest Therapy Society, and forest bathing factors into the Ministry of Environment’s “Project to Fully Enjoy National Parks.” In Texas, the practice caught on in 2019 when John Warner, a retired urban district forester with the Texas A&M Forest Service, helped create the state’s first forest bathing program at W.G. Jones.

Now, several ANFT-certified forest therapy guides lead walks in Texas forests. The ANFT has an online database of certified guides, many of whom lead walks in W.G. Jones.

Some Texas spas have added forest bathing to their menus. Experts say forest bathing can be done anywhere you can connect with nature, but guided experiences are recommended to fully benefit from the practice.

“The forest is the therapist; the guide opens the doors,” says Houston-based guide Gabriela Guedez. 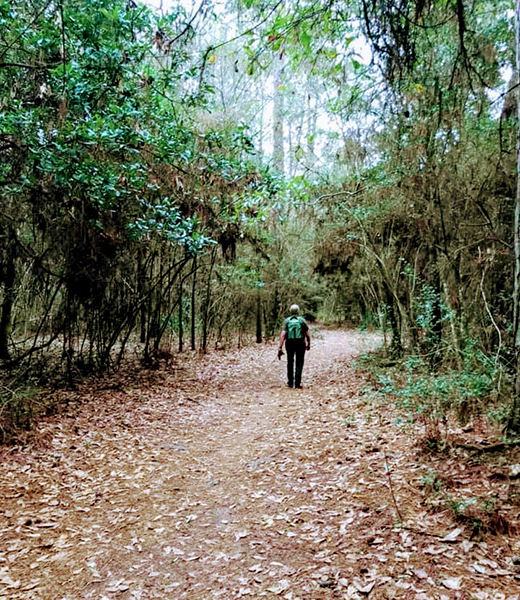 Nature’s Embrace hosts a monthly guided walk in The Woodlands and the nearby George Mitchell Nature Preserve. | Photo by Diana Markuson

Retired nurse Diana Markuson guides walks of up to 15 people in parks in The Woodlands and the nearby George Mitchell Nature Preserve.

She leads a donation-based, monthly “Back to Nature Forest Therapy” walk from 8:30 to 11:30 a.m. that departs from the Rob Fleming Park Recreation Center and several trailheads. Days vary.

Participants register through the Life Coaching Hikes Meetup group. Proceeds go to a tree-planting charity. Markuson also offers walks for participants and their dogs. She brews a variety of teas­–including yaupon, American beautyberry, and goldrod–from leaves on local trails. “We’re always in our thinking mind, and when we’re there, we really can’t form a real relationship with nature,” she says. “It’s the slowing down everybody needs.”

Originally from Venezuela, Gabriela Guedez leads walks in English and Spanish of up to 20 people at W.G. Jones and Northshore Park in The Woodlands, as well as the 80-acre Kickerillo-Mischer Preserve, a park with lakes about 30 minutes north of Houston.

“I like to have water elements on my walks,” she says. She also does forest therapy on the lake in kayaks with small groups at North Shore Park. Prices vary. “With the pandemic, many people came to me to find peace,” Guedez says. “The forest gives them serenity.” 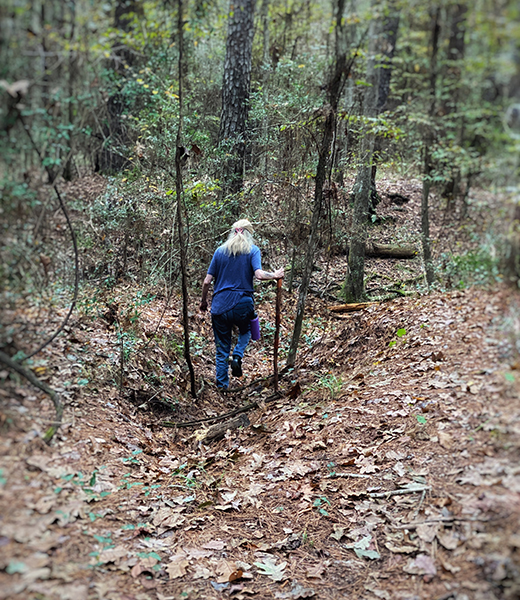 Embark on an individual forest therapy walk with the guidance of Recovery Untamed. | Photo by Jammie Schmunk

Jammie Schmunk runs a spirituality-based forest therapy program for groups of 5 to 7 people in W.G. Jones.

“We’re giving the brain a break and bringing back online the senses,” she says. 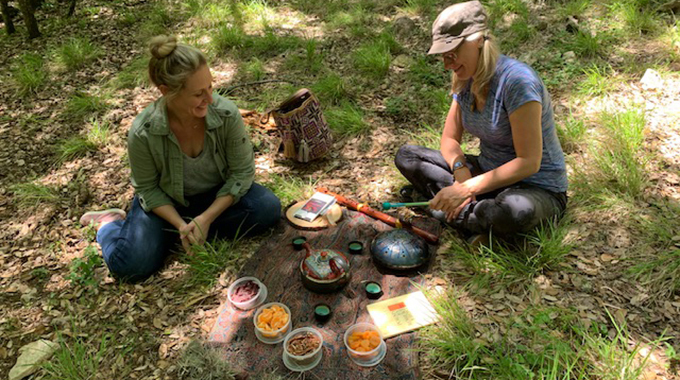 “I really like to know my clients and find out what’s going on in their life,” she says.

Lake Austin Spa Resort’s private, 2-hour guided forest bathing nature walk and picnic for guests is geared toward couples. The outing, via water or land, is led by certified yoga and meditation specialists. Guests enjoy prosecco after their walk; $495 per couple. 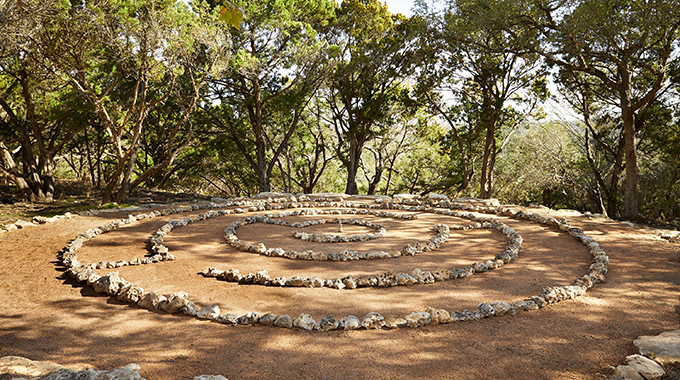 The restorative forest bathing nature walk at Miraval is for guests who’ve booked an overnight stay or day package at the spa. The resort’s ANFT-certified guide takes guests along a trail inside Miraval’s 220 acre-property overlooking the Balcones Canyonlands Preserve and Lake Travis. Group walks are $55. A private session for one is $115. A semi-private session is $55 per person. miravalaustin.com.

Deborah Lynn Blumberg is an award-winning writer who has been published in the Wall Street Journal, Newsday, and Houston Business Journal.