A voyage of discovery on a Columbia River cruise

Aboard the American Empress riverboat, a writer follows the Lewis and Clark Trail in the Pacific Northwest.

The sun was just rising as the paddle wheeler American Empress backtracked up the Columbia River, leaving Astoria, Oregon, for Portland, our final destination on this river cruise. We were somewhere near Rainier, and looking out the window from my stateroom, I saw small fishing boats moving quickly past the ship, with the anglers eager for salmon.

I grabbed my jacket and camera and headed up two decks to a public viewing area just below the pilothouse. Standing next to the front railing, I looked out over the bow. Off the port side, a docked cargo ship was being loaded with stacks of plywood recently fabricated from a mill adjacent to the river. Just ahead, a sea lion popped to the surface.

Two of my fellow passengers on this Columbia River cruise, Roger and Ann from Connecticut, came out on the deck below me.

“I guess we’re the only ones up right now,” Ann said. “The others don’t know what they’re missing.” We smiled and took pictures of each other, sharing a quiet moment on the river.

It was the last day of my river cruise aboard the American Queen Steamboat Company’s American Empress, which offers nine- and seven-day itineraries on the Columbia and Snake rivers; schedules alternate between sites near Portland and Spokane.

At stops, passengers can explore the history of the Pacific Northwest, including its American Indian heritage and its British and Russian fur-trading legacy. They can also gain insights to the great adventure that began in 1804, when President Thomas Jefferson commissioned Meriwether Lewis and William Clark and the Corps of Discovery to set out from Camp River Dubois (now Wood River, Illinois) and journey west through undiscovered territory to reach the Pacific Ocean.

My love for the American West drew me to this river cruise to trace the final watery portion of Lewis and Clark’s odyssey. By the end of my journey, I’d discovered more than I’d imagined. 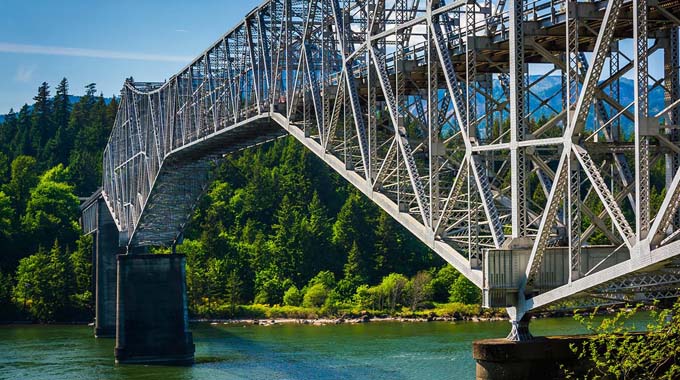 The Bridge of the Gods spans the Columbia River in Cascade Locks, Oregon. | Photo by ImageBroker/Alamy Stock Photo

When the boat docked in Stevenson, Washington, about 30 fellow passengers and I boarded a motorcoach and headed out along State Highway 14, the Lewis and Clark Highway. We crossed the Columbia River, driving over the Bridge of the Gods, a modern 1920s cantilevered steel bridge between Washington and Oregon whose name reflects American Indian lore. As the legend goes, 1,000 years ago, Manito, the Great Spirit, created a natural rock bridge, but fighting between his sons in the shape of mountains over the love of the beautiful Squaw Mountain ultimately destroyed the bridge, creating the Cascade rapids. Across the river we saw Beacon Rock, an 848-foot basalt monolith named by Lewis and Clark.

Here, the explorers realized that the Pacific Ocean was within reach: On November 1, 1805, after 17 months of traveling by keelboat, canoe, horseback, and on foot, pushing across the Continental Divide, they had discovered a tidal influence in the river. On November 7, still 20 miles from the coast, Clark wrote in his journal, “Ocian in View. O! the joy.” But it would be another week before he and Lewis would finally reach the ocean. 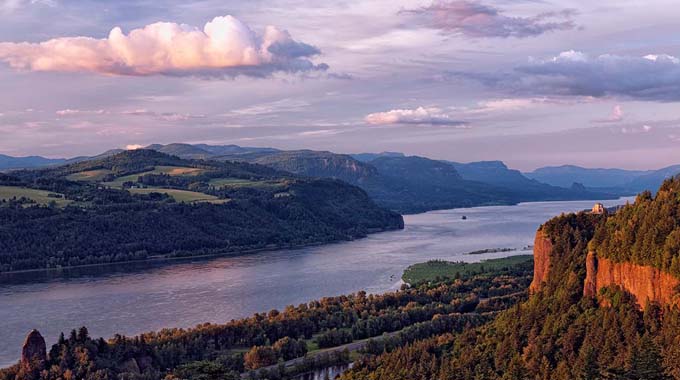 We stopped at the Crown Point promontory over the Columbia River Gorge and assembled on the granite steps of Vista House, a 1918 octagonal stone observatory perched more than 730 feet above the river. A volunteer greeted us, but I heard only about every other word of his talk—I was drawn to the edge of the rocky tor. I closed my eyes and imagined the explorers—Lewis; Clark; Sacagawea, the young Lemhi Shoshone woman who proved their friend and interpreter; and Charbonneau, her French-Canadian husband—celebrating their Beacon Rock discovery.

Everything we saw and learned fed my curiosity to explore more. The next morning, we docked at Astoria, founded by American fur entrepreneur John Jacob Astor in 1811, and I joined my cruise mates back on the bus for a drive across the Astoria–Megler Bridge, back into Washington. At the Lewis and Clark Interpretive Center, part of Lewis and Clark National and State Historical Parks, the weather was perfect—if you wanted to experience what the Corps found when members paddled their canoes along the Columbia’s north side. It was November 1805, and they had had days of rain, wind, and waves pounding against the shoreline. Our ranger confirmed that the rain goes sideways here, driven by winds that make it hard even to stand up.

From the interpretive center on Cape Disappointment, we could see the Columbia River’s entire mouth where it opens into the Pacific. A popular myth is that the place got its name from a member of the Lewis and Clark expedition after he found no ships waiting for them. For me, the weather said it all. I looked out through large, thick windows at the breakwater and saw the waves, pushed by today’s storm, breaking over the rocks; yes, the rain this morning was going sideways. For the Corps, conditions were dismal enough that after two weeks of camping, the expedition headed for what is now the Oregon side of the river. Here, they found fresh water, firewood, trees for constructing a fort, plenty of game, and a break from the harsh weather at the river’s mouth.

Our bus pulled up to a Fort Clatsop replica in Fort Clatsop National Memorial. Life was basic, the ranger explained. It took less than a month to build the fort, and Corps members moved in on Christmas Day 1805. They stayed nearly four months. In the fort’s seven rooms they slept, ate, and stored provisions, including furs and elk meat. One room contained a replica bed big enough for Sacagawea, Charbonneau, and their young son, Jean-Baptiste.

Life aboard a Columbia River cruise

By contrast, my journey was cushy. The American Empress is no Corps of Discovery keelboat. The ambience is country club casual, and no formal wear is required. The staff went out of its way to make guests feel comfortable. Don’t be surprised if you’re greeted by name by the second day. Some 80 staff members support a maximum of 166 passengers, along with one captain, pilots, and watchmen.

Most meals are served in the Astoria Dining Room, and the top-deck River Grille and Bar offers continental breakfasts, a stationed lunch buffet, and reservations-only specialty dinners. The kitchen staff reached out for fresh ingredients from local farms.

At every town where the American Empress docks, the ship offers hop-on, hop-off stops, allowing passengers to explore the downtown or main feature of each historic community. Guests also may sign up for premium shore excursions that cost extra, such as the Lewis and Clark Experience or the Zip Lining Adventure.

Staff members provided evening entertainment in the Show Lounge: singing, dancing, and performing comedy routines—a bit unpolished, but fun. At Fort Clatsop, the Corps members would have spent their evenings sitting around a fire, mending their clothing, writing in their journals, and preparing for the next day’s needs. I almost felt guilty thinking about that.

On the last day, we headed into the Portland shipping channel, where we shared space with vessels from all over the globe. We tied up to massive wood piers and began to depart down the gangplank. I couldn’t help thinking about Clark’s joy-filled journal entry about reaching Beacon Rock and finding he was close to the end of his quest. I’d come to the end of my personal journey, following the Corps of Discovery to Fort Clatsop.

Could I have followed Lewis and Clark into the wilderness, not knowing if I would ever return? I’d like to think my new passion for wanting to see what is just over the ridge, wondering what is just around the bend, would be enough for me to say yes.

Mike Harris is the author of Olvera Street: Discover the Soul of Los Angeles and founder of OldWestNewWest.com.

AAA Travel Alert: Several countries, states, and cities have implemented travel and business restrictions due to COVID-19. Prior to making any travel reservations, please ensure that hotels, attractions, and restaurants are open. The local tourism board is a good resource for updated information about your destination.

Cruise the magnificent waterways of America