A part of a car's exhaust system, catalytic converters use precious metals to scrub toxic gases and pollutants from an engine’s exhaust. Photo by Cultura Creative Ltd./Alamy Stock Photo

Turns out, lightning can strike twice. Or, in Cathy Cobb’s case, it was thieves. After a day’s work, Cobb switched on her Honda Element, only to be startled by a noise that could wake the dead. The ruckus was familiar; it was the second time in less than a year that a thief had ripped apart her car’s exhaust system to steal its catalytic converter. The first time, the Honda had been in her own driveway.

Catalytic converter theft has become an epidemic. From 2008 to 2015, vehicle owners reported 25,394 thefts, according to the National Insurance Crime Bureau (NICB). Since then, thefts have accelerated dramatically—3,389 in 2019, 14,433 in 2020, and a whopping 52,206 in 2021. These numbers reflect only thefts for which claims were filed with insurance companies, so the actual totals are almost certainly higher.

Why catalytic converter theft has increased

Since the mid-1970s, nearly all gasoline-powered cars and trucks have been equipped with one or more catalytic converters, which are a part of a car’s exhaust system. Resembling small mufflers, catalytic converters scrub toxic gases and pollutants from the engine’s exhaust using platinum, palladium, and rhodium—metals more precious than gold.

Increased world demand has sent prices of these metals soaring tenfold from a decade or so ago. In early March 2022, rhodium was valued at about $20,000 an ounce, palladium at about $2,900 an ounce, and platinum at about $1,100 an ounce. 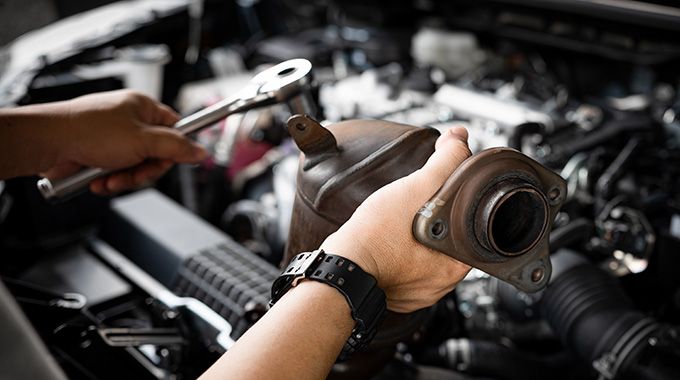 Thieves can remove a catalytic converter in minutes armed with nothing else but a wrench or a saw. Depending on the target, they don’t even need a jack to raise the car to get underneath it. Photo by Chaiyasit/stock.adobe.com

Armed with little more than a wrench or a hacksaw, a thief can slither under a vehicle and remove a converter in just a few minutes. Pickups and SUVs like Cobb’s Element are popular targets because they sit higher off the ground, making it easier for thieves to get to the converter.

Scrapyards typically pay a couple of hundred dollars or more for converters. Some converters from hybrid vehicles can fetch as much as $1,400 because they contain more precious metals and they degrade less because the hybrid’s gasoline engine doesn’t run continuously. In turn, scrapyards sell converters to recyclers, which extract the metals.

Catalytic converter replacement has generated a lot of business for repair shops. Replacing a converter isn’t cheap, running anywhere from several hundred to several thousand dollars, depending on the vehicle and on how much damage a thief inflicts on the exhaust system’s pipes and sensors.

About half of U.S. states have proposed or enacted legislation, in more than 150 separate bills, to address catalytic converter theft. A federal bill, too—the bipartisan Preventing Auto Recycling Theft (PART) Act is being considered by Congress.

In September 2022, California Governor Gavin Newsom signed two pieces of legislation making it illegal for recyclers to buy a catalytic converter from anyone other than a vehicle’s legal owner or a licensed dealer.

“You take away the market for stolen goods, you can help cut down on stealing,” Newsom said.

The legislation also increases penalties for buyers who fail to certify that a catalytic converter was obtained legally. Metal recyclers and junk dealers will be required to document their methods for buying catalytic converters and keep records of who they buy them from; this will help ensure they’re doing business only with vehicle owners and qualified sellers.

Unfortunately, catalytic converters are likely to be stolen from anywhere cars are parked, according to the NICB. So what’s a car owner to do to discourage thieves from swiping their converter? Make it harder for them to get at it.

Here are the best ways to prevent catalytic converter theft:

Fortunately, Cathy Cobb’s comprehensive auto insurance policy covered replacing a stolen converter—although she had to pay out-of-pocket deductibles. And even though she purchased a protective shield for her latest converter, she’s now extra vigilant, making sure she always parks her beloved Honda in her garage.

Carfax has compiled lists of the most heavily targeted vehicles, based on service reports from more than 60,000 service facilities from across the country between 2019 and early 2022.

Nationwide, the models most likely to be targeted are:

Carfax has also broken down the frequency of catalytic converter thefts by region of the country.

Veteran automotive journalist Peter Bohr has been writing about cars for more than 4 decades.