Crashes are no accident in staged collisions

Being involved in a car crash is stressful no matter where, when, or how it happens. The "why," however, may matter if the crash isn't an accident.

It's estimated that thousands of collisions in the U.S. each year are the work of criminals who prey on unsuspecting drivers, and many purposefully instigate crashes so they can file fraudulent claims1. Staged collisions can be just as dangerous as an everyday crash. Luckier victims may escape with minor vehicle damage and higher premiums. Those less fortunate may be sued, traumatized, or even injured or killed. Drivers can protect themselves by recognizing potentially staged situations while driving, and taking smart steps after being involved in any crash. 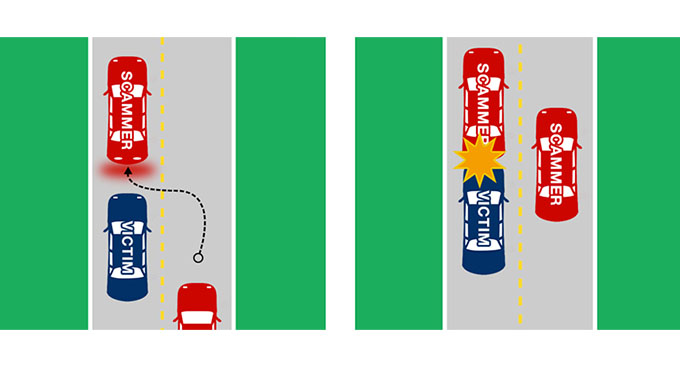 Staged collisions take three basic forms. The first of these is the "swoop and squat," in which another car cuts in front of you without warning and then suddenly stops, leading you to rear-end it before you can react

Also known as the "wave-on," this scheme involves the scam driver gesturing you to take the right of way, then deliberately running into you when you do. 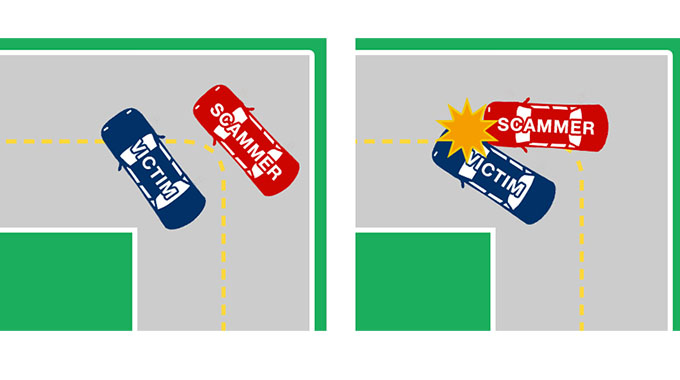 This maneuver occurs when you're making a turn from the inside lane of a dual-lane right or left turn and are then intentionally struck.

How to avoid staged collisions

As an alert driver, you should always be aware of the vehicles in front of and around you. Even if you’re not changing lanes, keep track of cars that may be in your blind spots. If you feel you’re “boxed in” by other drivers, slow down and back out.

Tailgating is unsafe for plenty of reasons unrelated to staged collisions, but it also makes you an easy target for a swoop-and-squat scammer. The more space you leave, the more room you’ll have to stop if the car in front of you suddenly brakes.

Know if you're at risk

Since they’re seeking a payout, scammers may target you if you’re driving a luxury or commercial vehicle, which may have more insurance coverage. Solo drivers are also more at risk, since they lack passengers who could be witnesses.

What to do after a crash

Even if you suspect the crash may be fraudulent, the first steps are the same for any collision. Remove your vehicle from traffic, if possible. Let the other driver know you’re not fleeing. If the crash is more than a fender-bender, call 911.

Get the other driver's name, address, driver’s license number, VIN, insurance policy number, and license plate number. Take pictures of all vehicles involved, as well as the other driver. If possible, obtain statements from nearby witnesses.

Beware of "helpers" who suddenly appear

Tow trucks that you didn't request may charge inflated rates or hold your vehicle hostage. Similarly, avoid strangers who tell you to see a particular auto body shop, doctor, or lawyer, as it could be a setup.

If you suspect fraud, call the police

An objective police report signed by an officer could be invaluable later if scammers try to change or embellish their account of what happened.