The Chateau Frontenac and the Quebec City skyline at sunset.

After an unprecedented 16-month closure, Canada is once again open to American vacationers.

That was a long time without being able to visit the soaring peaks of Alberta, the rugged shores of the Maritimes, bustling cities like Vancouver and Toronto, and everything in between. Whether you've been feeling the pull of the Great White North specifically or you're just looking to make your first international trip post-pandemic, we look at 10 of the best places to visit in Canada and what to do while you're there. 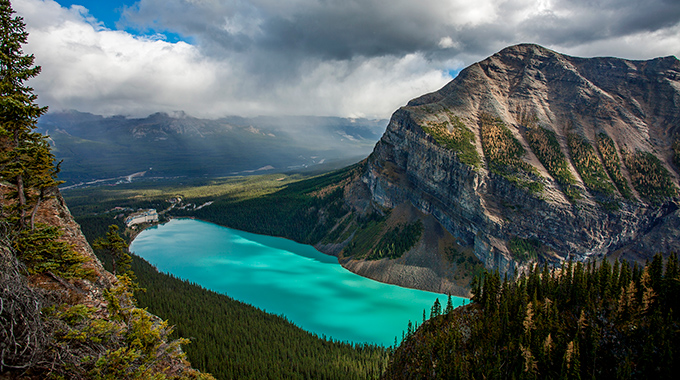 Canada's first national park sprawls across the jagged backs of the Rocky Mountains, offering some of the most beautiful alpine scenery in the world. It is a land of breathtaking vistas no photo can do justice to—no matter how gifted the photographer. Craggy, snow-capped peaks encircle forested valleys and glacier-fed lakes in a landscape carved over millions of years.

The castle-like Fairmont Banff Springs, built in 1926, stands on the outskirts of the charming resort town of Banff, where most development within the park is focused and where you'll find the largest number of hotels.

The village of Lake Louise is the park's second most-developed area. The community takes its name from the beautiful lake nearby, fed by meltwater from Victoria Glacier. Facing the glacier on the opposite shore is the Fairmont Chateau Lake Louise, a grand hotel with more than 500 rooms. The hotel, lake, and glacier together create one of the most photographed settings in the park. If you want photos of this popular scene, get our tips for taking travel shots you’ll be proud to share.

Travel through the legendary Spiral Tunnels, traverse the Continental Divide, and become inspired as you wind through mountain passes and dramatic canyons. Start in Banff and ride to Vancouver via Kamloops, or vice versa. 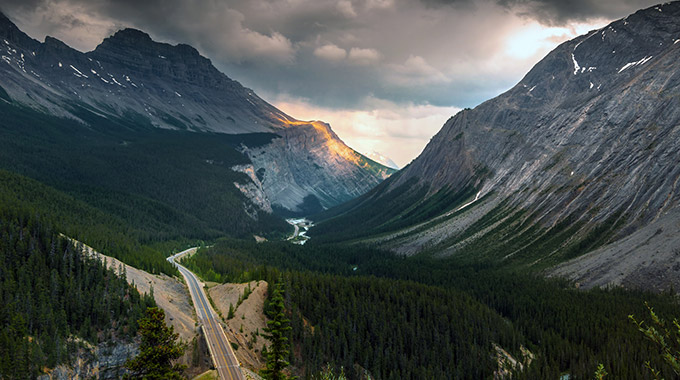 Sometimes a place defies description—and Jasper National Park, north of Banff, is such a destination. Visitors to this majestic park often use the words “spectacular,” “breathtaking,” and “jaw-dropping” to describe their experience. Seeing is believing.

While Jasper shares a border with Banff, it has its own unique magic. Its main artery, the Icefields Parkway, travels through a fantastical landscape carved over millions of years by ice, with entire mountains curving gracefully into the sky. Glaciers still keep silent watch, and visitors can even venture onto one that flows from the Columbia Icefield.

There are also plenty of gem-colored lakes, including Maligne Lake, which travelers can cruise on a sight-seeing boat or explore by canoe or kayak. It's home to tiny Spirit Island, which is among the most iconic (and photogenic) sights in the entire Canadian Rockies.

Ride to Jasper on Rocky Mountaineer's Journey Through the Clouds

Travel through scenic valleys, along the mighty Fraser River, through Hell’s Gate, and past the magnificent Pyramid Falls. This Rocky Mountaineer rail route, only accessible by train, also features the majestic Mount Robson, the highest peak in the Canadian Rockies. 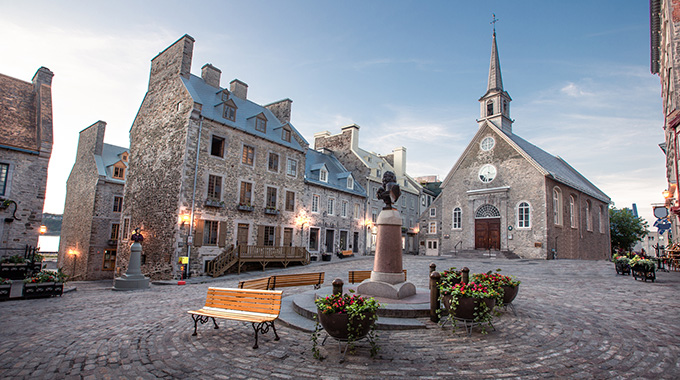 The former capital of New France is romantic, enchanting, and captivating. To say the Old City (Vieux-Quebec) is beautifully preserved is an understatement. The compact area is reminiscent of an old French village, narrow streets winding in a seemingly haphazard fashion. Gray stone buildings, many built in the 17th century, now house bistros, sidewalk cafes, shops, and galleries. The clip-clop of horse-drawn carriages blends with snippets of melodic French heard in passing.

Admire the restored Place-Royale, the site of Samuel de Champlain's 1608 fur trading post. Then explore the 18th- and 19th-century buildings at Artillery Park Heritage Site, the star-shaped Citadel fort, and the expansive green lawns of the Plains of Abraham at Battlefields Park.

The focal point of the city, though, is the elaborate castle-like Chateau Frontenac, the landmark hotel that dominates Quebec City's skyline, its weathered green copper roof, turrets, and towers a familiar civic symbol.

You choose how you explore Old Quebec—on foot with a local guide or on a panoramic coach tour. Plus, visit Montreal, Ottawa, Toronto, and Niagara Falls. 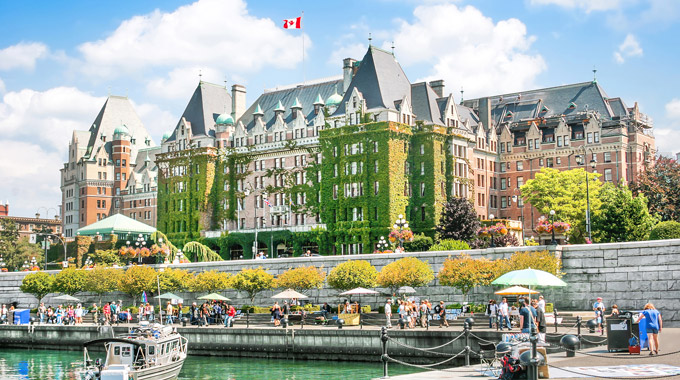 Regarded as Canada's gentlest city, Victoria has uncluttered streets, gardens that bloom year-round and hotels that have been serving high tea for decades. Residents tend prim English-style gardens, and the city's innumerable flower beds and hanging baskets, nurtured by its mild climate, bloom in bright displays.

The heart of the city curves around the stone-walled Inner Harbour, alive with pleasure craft, fishing boats, and coastal shipping vessels. Facing the harbor are the parliament buildings and the block-long, ivy-covered Empress Hotel, a destination for afternoon tea.

Discover Victoria on a Pacific or Alaska cruise

Set sail along the West Coast on a wine-country cruise that stops in Victoria, like Holland America's Wine Country and Pacific Northwest package. Or visit Victoria as part of a larger Alaska cruise, such as Princess's Inside Passage package. 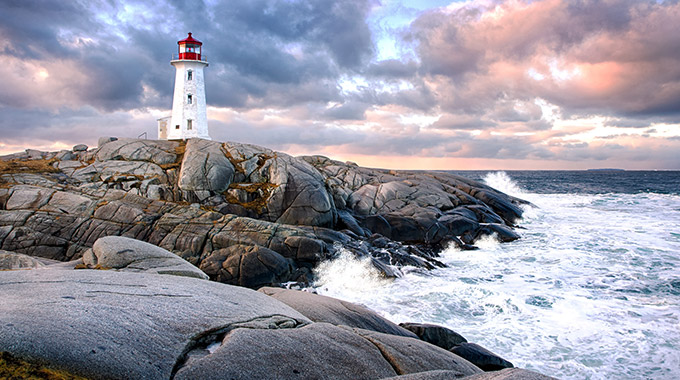 Life in the provinces of Nova Scotia, Prince Edward Island, and New Brunswick has historically centered on the Atlantic Ocean—hence the region's name.

Nova Scotia, where license plates hail the area as "Canada's Ocean Playground," is the most popular destination of the 3, with thousands of miles of dramatic coastline and a rich English, French, Scottish, and indigenous Miꞌkmaq heritage to explore. The capital Halifax is a bustling port with harbor cruises, a historic citadel, and great seafood. To the north, Cape Breton Island boasts amazing ocean and highland views along the Cabot Trail scenic drive.

New Brunswick's most famous attraction is the Bay of Fundy, whose unique geography means high tide rises over 50 feet more than low tide—the highest in the world. Visitors can experience a full tide cycle at the Hopewell Rocks, or watch the Saint John River flow backward at Reversing Falls. There's also plenty of history, including that of the original Acadians, to whom many of Louisiana's Cajuns can trace their ancestry.

Join the Landscapes of the Canadian Maritimes small-group tour

A mix of colorful harbors and sweeping coastlines, this nautical trip allows you to recharge by the sea as you take in some of Canada's iconic maritime history. 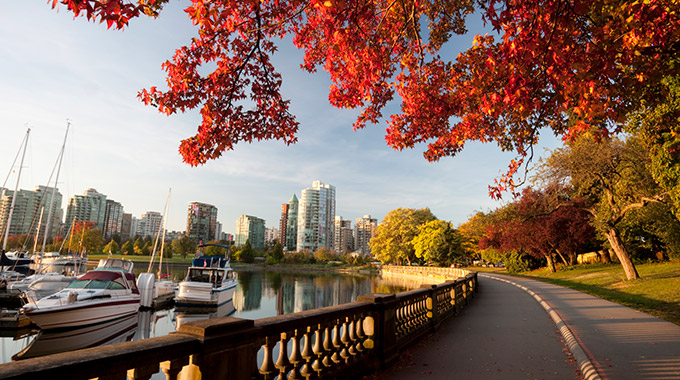 Vancouver has won many accolades as one of the top cities in the Americas, and for very good reasons. Set against a backdrop of majestic snowcapped mountains, the city lies on a peninsula that juts into the Pacific Ocean. This spectacular setting allows for a wide array of outdoor adventures, including skiing, sailing, hiking, scuba diving, fishing, and more.

Explore diverse neighborhoods ranging from trendy Yaletown to dynamic Gastown to Granville Island with its farmers market, where more than 150 vendors vie for your attention with homemade goat cheese, spicy sausages, and crisp apples. If you're in the mood for fine dining, indulge in fresh regional seafood, a Vancouver specialty.

This tour ends with 2 nights in the Okanagan, a fertile valley best known as British Columbia’s wine country, followed by 2 nights in Vancouver to discover its many gems and outstanding cuisine. 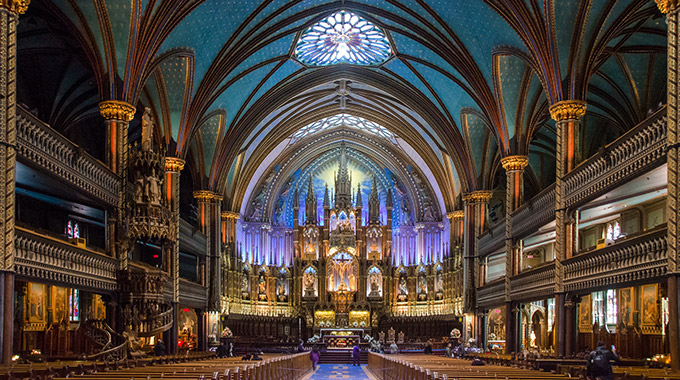 Inside the Notre-Dame Basilica in Montreal.

This vibrant city known for its joie de vivre is a treat for the senses. Set on an island in the St. Lawrence River, the city is a photographer's delight. Its imposing modern skyline contrasts with the narrow, 18th-century cobblestone streets of Old Montreal that recall the days of Ville Marie, the city's original settlement.

At the heart and summit of the city is Mont Royal, the mountain in the middle of the island French explorer Jacques Cartier climbed and named in 1535. The mountain is now part of Mont-Royal Park, an oasis of greenery.

Activities abound: Enjoy a traditional smoked meat sandwich, ride through the narrow passages of Old Montreal on a horse-drawn carriage, and discover the beauty of the 190-year-old Notre-Dame Basilica. Then discover the world under your feet in the Underground City, a subterranean maze of shops, offices, theaters, restaurants, and subway stations designed to help residents cope with the city's harsh winters.

Have a brunch of regional specialties at a Montreal sugar shack and learn about making maple syrup before walking the cobblestone streets of Old Montreal. This trip also visits Quebec City, Ottawa, Toronto, and Niagara Falls. 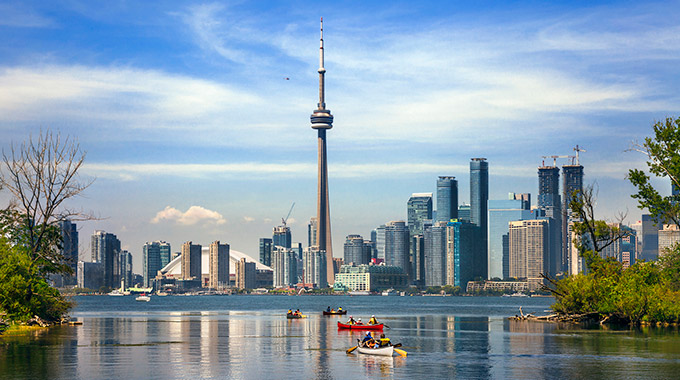 The Toronto skyline, seen from Toronto Harbour on Lake Ontario.

A combination of modernity and Old World charm, Toronto plays the perfect host to visitors who want a big city but crave more than steel and glass. Examples of Toronto's desire to maintain its history are everywhere you look. Fort York National Historic Site, the 1793 birthplace of Toronto, stands guard just over a mile from the CN Tower, one of the world's tallest buildings.

Sample some of Toronto's vibrant ethnic neighborhoods brimming with cafes, bakeries, markets, shops, bilingual street signs, and international flags. Celebrate the city's multiculturalism in Greektown on the Danforth, 1 of 2 Little Italys and 3 Chinatowns, or in the Indian, Korean, Polish or Portuguese areas.

Visit the Hockey Hall of Fame to learn the history of the game and take a photo with the real Stanley Cup. Then, take the ferry to Toronto Island Park for a picnic with an amazing view of the skyline, or explore the harbor up close with a kayak rental. 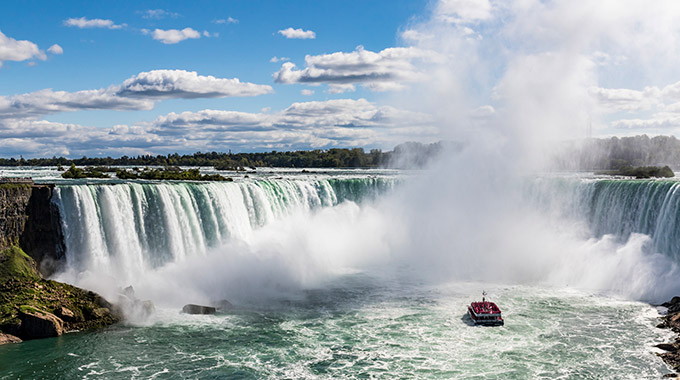 Horseshoe Falls, the largest of the 3 Niagara Falls waterfalls.

From conventioneers to honeymooners to families on vacation, millions of people from all walks of life travel each year to Niagara Fall for the same reason: to experience the cool mist, the thundering roar, the utter violence of a half million gallons of water crashing into a rocky gorge every second. It's not just a spectacular scene; it's a spectacular scene in unrelenting motion.

Sample the spectacular views along the Niagara Parkway from the Rainbow Bridge to Table Rock, and choose your favorite vantage point from which to observe the 3 waterfalls—American, Bridal Veil, and Horseshoe—known collectively as Niagara Falls. For a closer (and wetter) view, take a boat ride to the base of the falls. Then bask in the rainbow-hued glow at night when brilliant spotlights illuminate the roaring curtains, a sight accompanied by fireworks every night in summer.

Board a boat and experience Niagara Falls up close, then discover Niagara-on-the-Lake’s 300-year-old history of winemaking with a winery tour and tasting. Plus, visit Montreal, Quebec City, Ottawa, and Toronto. 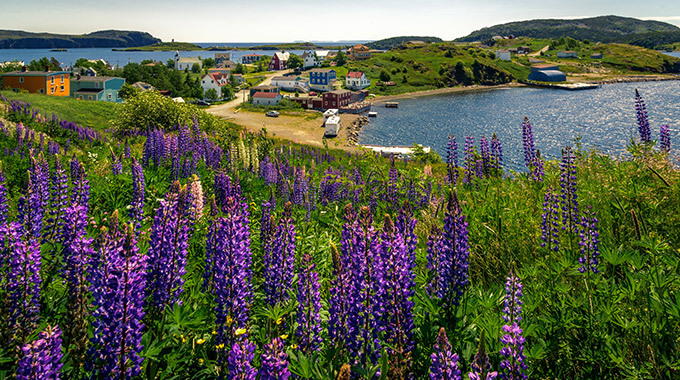 Lupine flowers in the historic Newfoundland town of Trinity.

The biggest town is St. John's, one of North America's oldest cities. It's crisscrossed by the Grand Concourse Walkways, more than 100 miles of paths that connect it with nearby communities and landscapes. Walk from downtown to Signal Hill, which offers great views of the city. Or stroll past the stores, restaurants, and pubs on Water Street, the commercial center of St. John's for more than 400 years.

Travelers can explore Gros Morne National Park to find remnants of the island's geological past: majestic lakes, fjords, and volcanic cliffs. Check out human history at The Rooms cultural center, which teaches about indigenous inhabitants such as the Mi'qmak; and the UNESCO World Heritage site of L'Anse aux Meadows, the site of a 1,000-year-old Norse settlement that may have been visited by Leif Erikson.

A new land—one filled with wild beauty, considerable local hospitality and centuries of maritime traditions—delivers an enchanting escape from reality that few are privileged to experience.