Why you should see Prague

A 1,140-year-old castle. A bridge with dozens of baroque statues. A bustling Old Town and Jewish Quarter.

It’s easy to see why Prague is Europe’s fifth most-visited city, ahead of such destinations as Amsterdam, Berlin, and Milan.1 Just as bridges from many eras cross the local Vltava river, Prague straddles the boundary between Western and Eastern Europe, as well as the one between past and present. Read on for just a few reasons why the town the Czechs call the “Mother of Cities” is worth a visit, and how best to enjoy it. 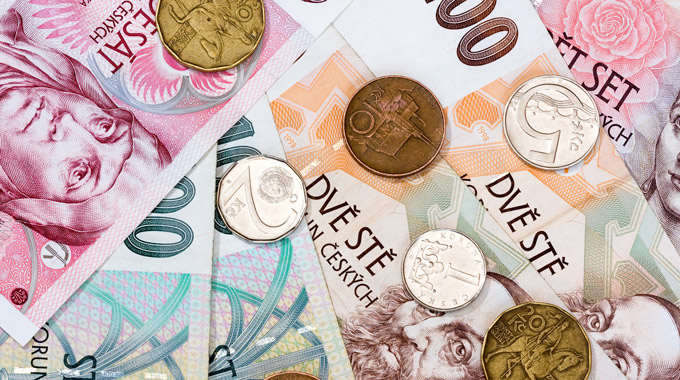 Unlike many of its neighbors, the Czech Republic hasn’t adopted the euro and still uses its native koruna (Czech for “crown”) as it has since 1993.

In the Czech language, female last names traditionally take on the gendered ending “a” or "ova.” For example, famous tennis player Martina Navratilova took her last name from her stepfather, Milos Navratil. Czechs are so accustomed to this linguistic rule that they often apply it to foreign names, which is why visitors might see books by J.K. Rowlingova, or a movie starring Audrey Hepburnova. 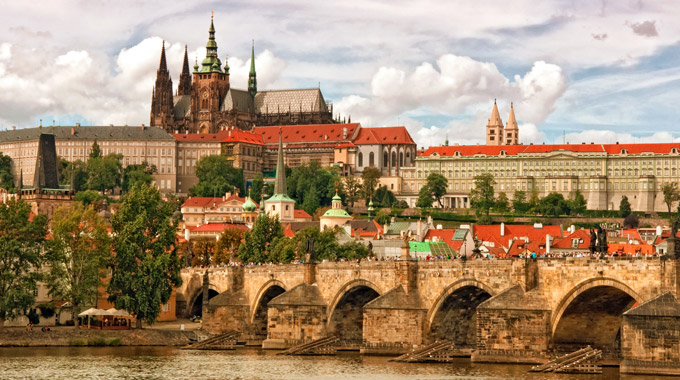 This fortress looks down on the city from the hill where it has stood in one form or another since the ninth century. Viewed from a distance, it’s easy to mistake the towering St. Vitus Cathedral for the entire castle, but it’s actually the centerpiece of a much larger complex.

After a modest hike up the hill, visitors can watch the hourly changing of the guard before entering a series of courtyards that lead to St. Vitus Cathedral. This Gothic skyscraper took 600 years to build, finishing in 1929. Inside, members will find the tombs of St. Vitus (patron saint of Bohemia, actors, and dancers, among other things) and Holy Roman Emperor Ferdinand I. Outside, members should tour the Old Royal Palace, which once hosted indoor jousting. 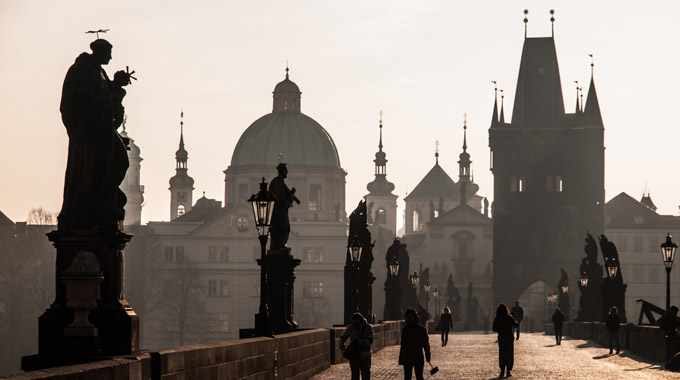 Named for King Charles IV, the Charles Bridge has spanned the Vltava since 1357. It connects Old Town with the Lesser Quarter, which makes it extremely easy to visit—members can cross it while walking from Prague Castle to Old Town, or vice versa. Those who have more time to spend on the bridge can also visit one or both of the towers at each end.

The bridge provides stunning views of the city and the river, but its 30 bronze sculptures are the real highlight, with each telling a story. For example, one depicts the martyr St. John of Nepomuk with a star-spangled halo. Legend holds that the saint was thrown from the bridge to his death after refusing to reveal secrets to the king; his tomb is one of many that can be seen inside St. Vitus Cathedral. 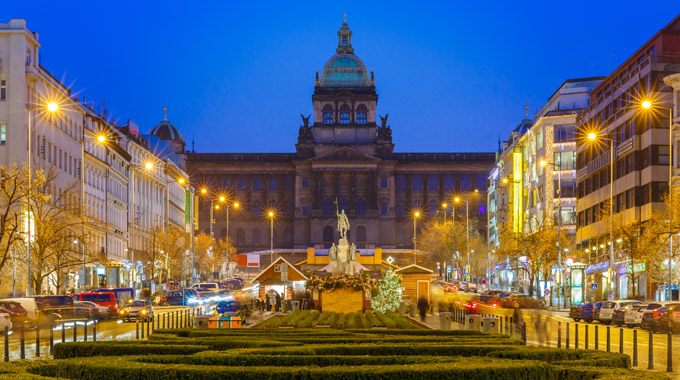 Members interested in more recent history should visit Wenceslas Square in the appropriately named New Town quarter, southeast of Old Town. Important events in Czech history have frequently touched the square, culminating with mass demonstrations there during the Velvet Revolution that led to the fall of the Communist government in 1989.

The square is much longer than it is wide, sloping upward toward a massive bronze statue of St. Wenceslas that has long been, and still is, a rallying place for protestors of all stripes. The square is also bordered on this end by the National Museum, which is worth visiting for its beautiful interior alone, not to mention the tens of thousands of artistic, historical, and scientific items on display. 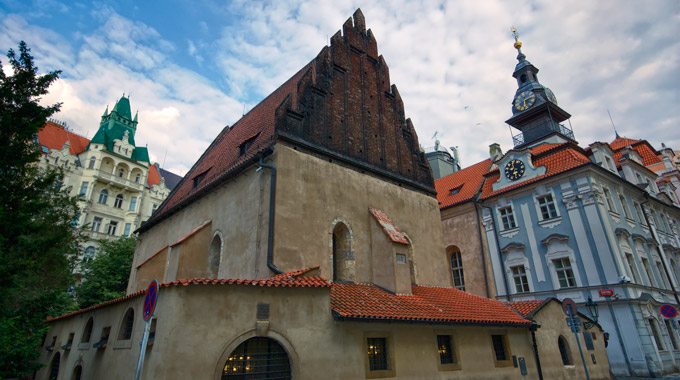 Prague’s Jewish Quarter was once home to the city’s Jewish population, which wasn’t allowed to live outside its walls until the 18th century. Though the old ghetto’s housing has since been replaced, most of the community’s important buildings have survived. That includes: 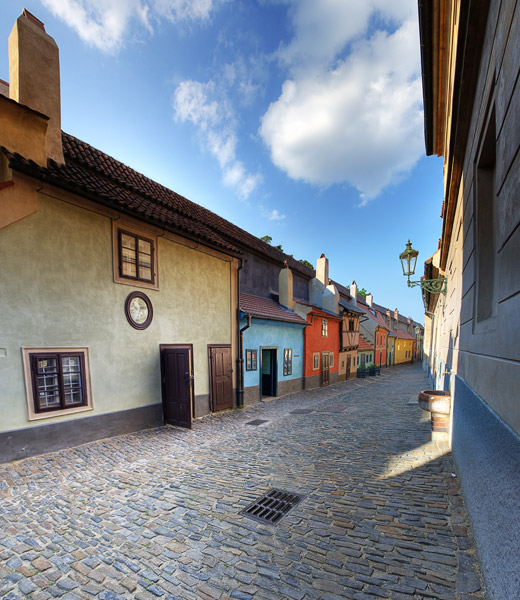 Prague is where author Franz Kafka was born, spent most of his life, and was buried. That makes it easy to trace his life, starting with his birthplace at the intersection of Kaprova and Maiselova streets. Though the house is gone, a sculpture commemorates the spot at what is now called Franz Kafka Square. In Josefov, a statue of the author riding atop an empty suit stands outside the Spanish Synagogue.

From there, visitors can cross the Charles Bridge and visit the small Franz Kafka Museum, before heading to Prague Castle. At the castle’s northeast end is the medieval Golden Lane, a row of colorful houses where Kafka rented No. 22 between 1916 and 1917. To complete the span of Kafka’s life, visitors can take the Metro to the New Jewish Cemetery in the Vinohrady district to see Kafka’s final resting place. 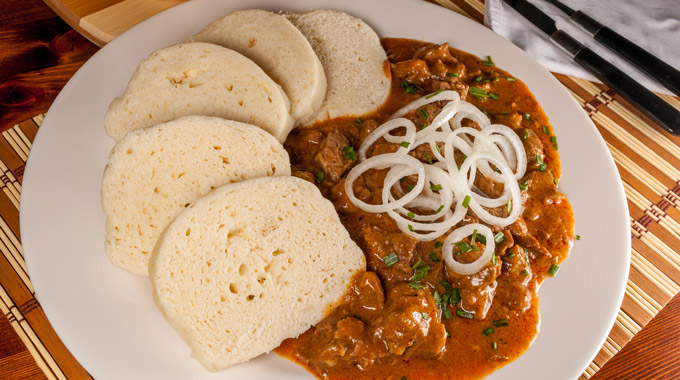 To the American ear, the word “goulash” may bring to mind bland Eastern European fare ladled out of an enormous stock pot. That impression couldn’t be further from the truth: Goulash is a hearty and flavorful stew, with the most common Czech interpretation containing plenty of beef, onions, and spices.

It’s often served with a side of bread dumplings, another term that can be confusing for visitors. Rather than a dough pocket stuffed with a filling, bread dumplings are more like a baguette-shaped matzah ball cut into slices. These dumplings are a staple of Czech cuisine, and no visitor should leave without having them at least once. 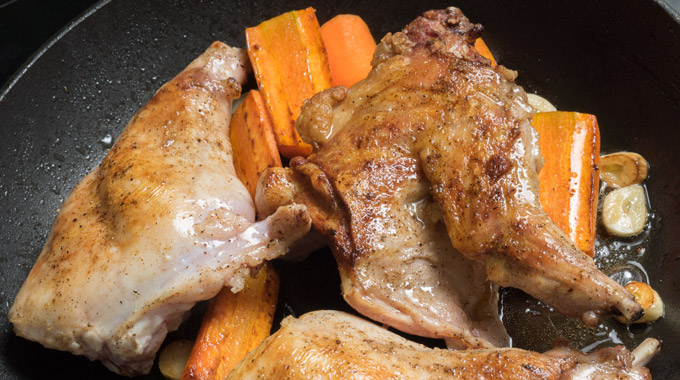 What looks like chicken, but comes off the bone like pork? That would be rabbit, a dish that has almost disappeared in the United States but can be found all over the Czech Republic. Rabbit is often compared to chicken, since they’re both high-protein, low-fat meats with similar textures. But pieces of rabbit are usually easier to disassemble than chicken, and the flavor is different enough to be new and interesting to an American palate. (Wild-caught rabbit may be gamy, but most restaurant rabbits are farm-raised.) Rabbit readily takes on the flavor of whatever it’s served with, so make sure to get your favorite garnish. 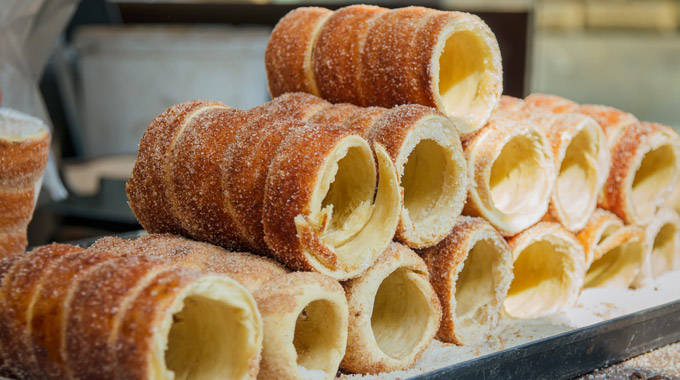 Whether you’re looking for dessert after dinner, or just a snack while exploring during the day, there’s never a bad time to get a trdelník (pronounced “tur-DELL-neek”). This sugary pastry is traditionally made by wrapping dough around a cylinder and baking it above an open flame, which gives it its trademark coiled spring shape. Most trdelníks are coated with cinnamon, though some vendors offer additional toppings like chocolate and jelly.

Prague’s streets have plenty of trdelník vendors, so it’s not hard to find one when the mood strikes. For a more gourmet experience, many brick-and-mortar bakeries have their own take on the pastry as well. 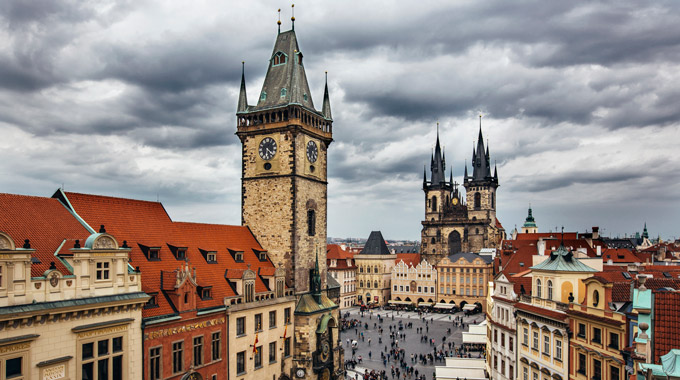 Visitors who want to stay within walking distance of most of Prague’s sights can book a room at the Penzion U Medvídku, which is just eight minutes from both the Charles Bridge and Old Town Square. The name of the hotel means “Inn of the Little Bear,” and it’s housed inside a former 15th-century brewery tavern—visitors can pay extra to stay in “historic rooms." The hotel continues the tavern’s legacy in the present day with its own restaurant, which serves traditional Czech fare in a beer hall-type environment. 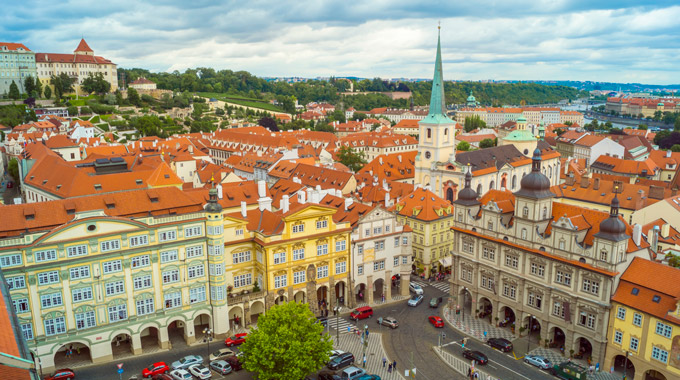 Those who prefer to be closer to the castle can stay at Hotel Sax in the Lesser Quarter. It’s just a seven-minute walk from the castle’s front gate, and less than a half-hour walk from Old Town. Convenience isn’t the only draw: Sax has a funky retro-inspired interior full of shapes and colors from the 1950s, ’60s, and ’70s that are a nice change of pace from the staid history of the surrounding city. 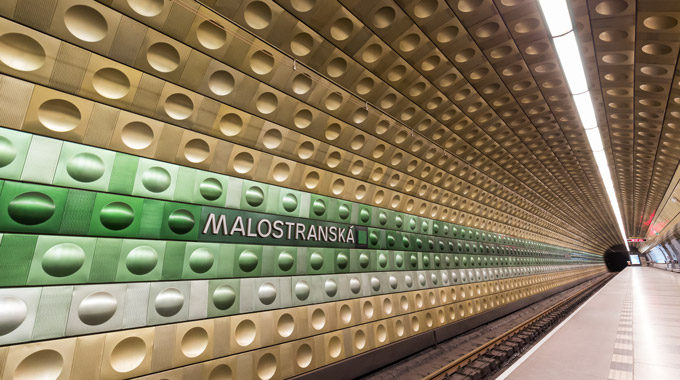 Get around on the Metro

Prague’s inner city is wonderfully walkable, but sometimes walking isn’t an option. Prague’s Metro is clean, fast, and reliable, with three lines that conveniently cross one another in Old Town. A few things to keep in mind:

Other cities to add to your trip

Deepen your understanding of the Czech Republic with a trip to Brno, the biggest city in the region of Moravia. It’s home to the Cathedral of St. Peter and Paul, a national cultural monument (it’s on the 10 koruna coin) with two striking, needle-thin spires that can be seen from an impressive distance. Other highlights include Spilberk Castle and the Macocha Abyss cave. 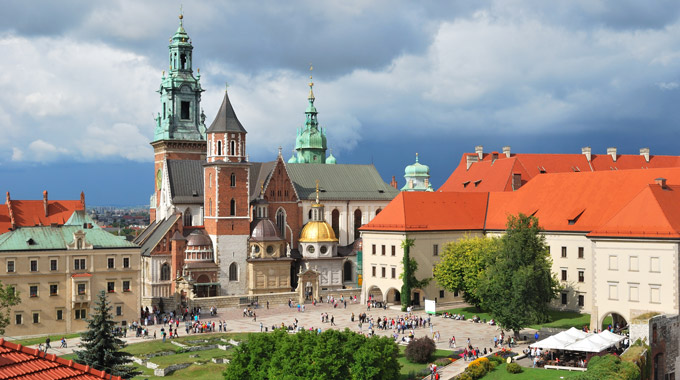 In Krakow, you’ll find Wawel Castle, the historic home of Poland’s kings and a treasure trove of Polish history and culture. Tour the belfry of Wawel Cathedral and see the city from a unique angle, or journey to the cathedral’s crypt to see the resting place of many of Poland’s national heroes, from Casimir the Great to American Revolutionary War hero Tadeusz Kosciuszko. 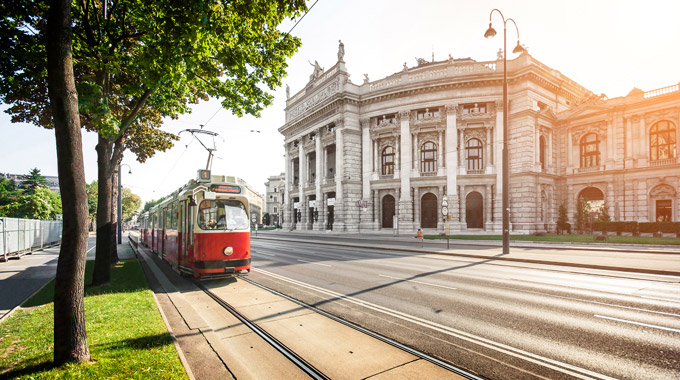 Whether you’re interested in architecture, food, or music, Austria’s capital has plenty to offer. Architecture ranges from the Gothic pointed arches of St. Stephen’s Cathedral to the 19th-century Imperial majesty of the city’s Ring Road. Enjoy a strudel and coffee at one of the many grand cafes where thinks have cogitated for centuries, or take in a concert in the city that once hosted Strauss, Beethoven, and Brahms. Plus, it’s less than 50 miles from the Slovakian capital of Bratislava, if your wanderlust still isn’t sated.

Navigating all the available options is no small task when considering a trip to Prague. A friendly AAA travel advisor is your one stop to plan a vacation that fits your budget and creates lasting memories. Submit a request for travel planning assistance online.

Plus, book a package through AAA Vacations and you’ll have access to AAA member benefits, complimentary inclusions, 24/7 Member Care2, and our Best Price Guarantee.3 Learn more about AAA Vacations.

3If you make a booking with us for a qualifying cruise or tour vacation designated as a AAA Vacations® (a “Qualifying AAA Vacations”), and you find a Valid Better Rate for the exact same itinerary within 24 hours of your booking, AAA Vacations will match the lower rate and send you a $50 AAA Vacations Future Travel Credit Certificate (limit one certificate per booking). For complete terms and conditions for the AAA Vacations Best Price Guarantee, contact your local AAA branch or visit AAA.com/Bestprice. A Valid Better Rate is a lower rate offered by a North American IATA/ARC registered business that satisfies the requirements of the Terms and Conditions as determined by AAA Vacations in its sole discretion.