Is there a more iconic American roadway than Route 66? Decades after its retirement as a federal highway, this cross-country corridor still draws road trippers from around the world, though it’s not possible everywhere to hit the original pavement.

It’s an exercise in time travel—a taste of pre-Interstate travel—and in all-around Americana, given the abundance of vintage tourist landmarks and kitschy roadside attractions still to be found along its blacktop. U.S. Route 66–nicknamed the “Mother Road” and the “Main Street of America”—opened in 1926, connecting Chicago with Santa Monica. It cut across eight states to do so: Illinois, Missouri, Kansas, Oklahoma, Texas, New Mexico, Arizona, and California. The Mother Road served as an important westward funnel for Americans displaced by the Dust Bowl, then one of the country’s quintessential tourist routes.

The development of the Interstate Highway System spelled the end of Route 66’s golden era, but the Mother Road lives on in the form of state highways, frontage roads, business loops, and other remnants, many marked with the irresistible 66 label. Combining those with the various Interstates that replaced Route 66, you can cobble together all kinds of different sightseeing adventures along the Main Street of America. 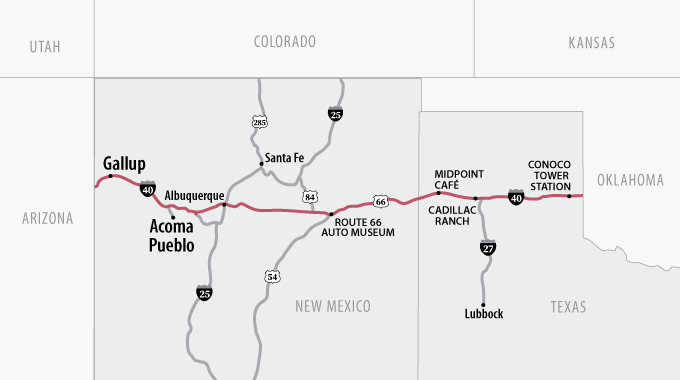 There are magical glimpses of the historic Route 66 to be had along most of its roughly 2,500-mile span, but in this overview we’re focusing on a road trip where the Main Street of America crosses Texas and New Mexico, two states that host to some of 66’s most iconic stops and vistas strung along I-40.

The Texas Panhandle claims about 185 miles of Route 66, while New Mexico’s mileage is the most of any state at nearly 500. We’d suggest tackling this span over a couple of days.

For the following recommended stops, the mileage refers to a west-to-east drive on I-40 from the New Mexico-Arizona border to the Oklahoma-Texas line.

When to drive it

You can take this road trip anytime of year, but fall—with more pleasant temperatures and a lower risk of bad weather—is probably the all-around best window.

Things to see & do

This trading post predates Route 66, having opened in 1913. Inside you’ll find a wide variety of jewelry, handicrafts, and several thousand Navajo rugs for sale. 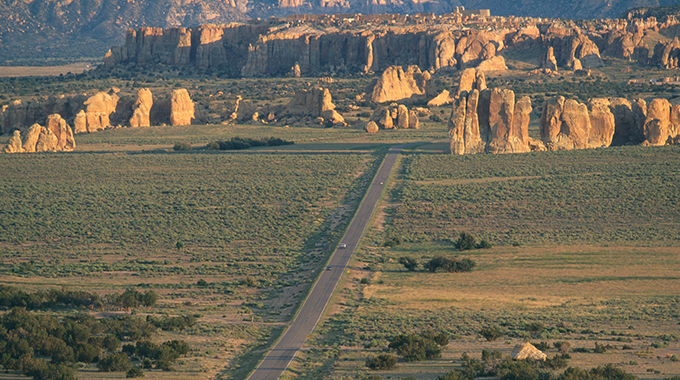 Take Highway 23 south of I-40 to visit a spot whose antiquity really puts Route 66’s to shame. Located atop a nearly 400-foot-tall mesa, Acoma Pueblo—also known as “Sky City”—is one of the oldest continually inhabited communities in North America, having been home to indigenous residents since the 12th century. The Sky City Cultural Center offers guided tours and sells some of the Native pottery for which the Pueblo is renowned. You’ll also find some fascinating historical exhibits on display at the Haak’u Museum within.

As motorists drive east into Tijeras along New Mexico 333, rumble strips under their wheels play “America the Beautiful”—worth getting off I-40 in Carnuel to experience.

Cars are at the heart of the Route 66 experience, then and now, and at the Route 66 Auto Museum you can imagine yourself cruising the Mother Road in its prime in a classic set of wheels. More than 30 gleaming vintage rides are on display here. 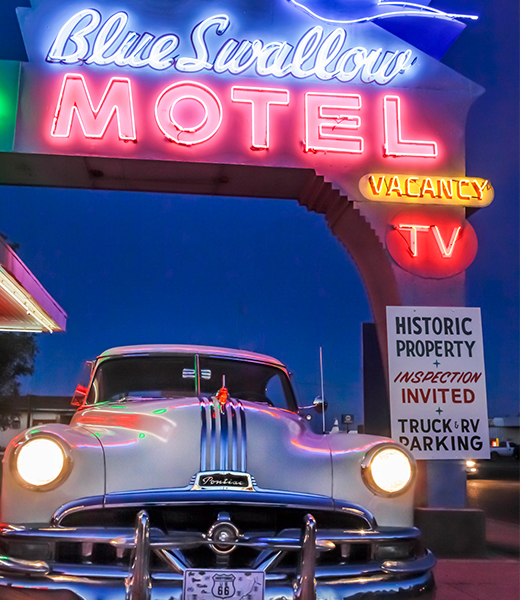 The small city of Tucumcari serves up Old West ambience and Route 66 romance in equal measure. Among the Mother Road landmarks here are the much-photographed neon sign of the Blue Swallow Motel, the long-running Tee Pee Curios shop, and the commemorative Route 66 Monument. We also highly recommend a visit to the Dinosaur Museum on the campus of Mesalands Community College, the prehistoric wonders of which include a 40-foot-long skeleton of the Jurassic meat-eater Torvosaurus. 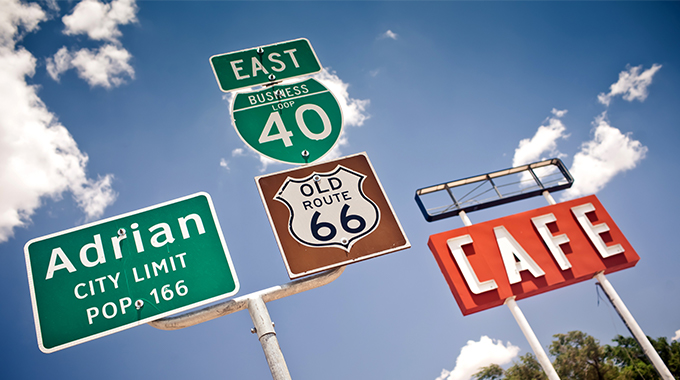 Named for its position roughly halfway along Route 66, the Midpoint Cafe is another classic stopover and fuel-up spot. It also provided the inspiration for Flo’s V-8 Cafe in the Disney/Pixar hit Cars.

Easily one of the defining sights on Route 66, Cadillac Ranch shows off 10 half-buried Cadillacs, taillights up and graffiti-smothered. The quirky installation was the brainchild of a trio of artists and dates from 1974. (It also inspired a Volkswagen Bug version—the “Buggy Ranch”—in nearby Conway.) 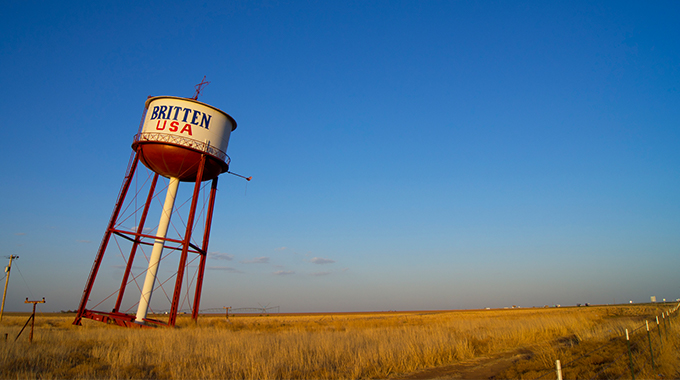 The Leaning Tower of Britten.

Among the best-known architectural treasures of Route 66, the Art Deco-style Conoco Tower Station dates from 1936. It and the attached U-Drop Inn Cafe are now owned by the City of Shamrock and host the town chamber of commerce.

From Amarillo, it’s just a short detour south of I-40 to take in the astounding scenery of Palo Duro Canyon, a huge and colorful chasm on the Caprock Escarpment long used by Southern Plains tribes.

If you feel like extending your Route 66 journey, meanwhile, keep driving east past Texas to take in Oklahoma’s rich share of Mother Road landmarks, including the Oklahoma Route 66 Museum in Clinton, Lucille’s Service Station in Hydro, and the Seaba Station Motorcycle Museum in Warwick.

Members can visit their local AAA branch for free maps and TourBooks1, or go online to find maps in the AAA Map Gallery and check gas prices and road conditions, plus much more.

Prevent wear and tear on your personal vehicle by renting a car for your next road trip. AAA members save up to 20% on when they rent with Hertz in the U.S. and Canada, and additional qualified AAA drivers are free—great for sharing driving responsibilities on a longer trip.2

2Benefits are only valid for rentals in the United States and Canada.