7 of the most scenic trains to ride in Europe

The Gornergrat Railway crossing the Findelbach Bridge near Zermatt, Switzerland.

From the soaring Swiss Alps to the rugged coast of Spain, many of Europe's most breathtaking sights are best seen from the comfort of a train.

We look at some of the continent's most remarkable railways, including one that travels beneath the sea and another described as a luxury hotel on rails. 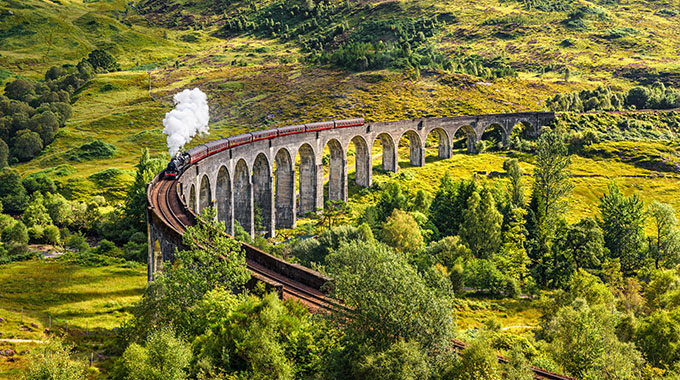 The Jacobite Steam Train crossing the Glenfinnan Viaduct in Scotland.

Even if you've never been to the Scottish Highlands, you've probably seen this route thanks to its starring role in the Harry Potter films as the Hogwarts Express. That's why it's more commonly called "the Harry Potter train." (The exact locomotive seen in the movies is now on display at the Warner Bros. Studio Tour London.)

Muggle travelers are unlikely to find themselves transported to Hogwarts, but thanks to countryside scenery like the soaring arches of Glenfinnan Viaduct and the blue waters of Loch Eil, it'll be a magical experience anyway. The bustling seaside town of Mallaig is worth visiting too, either as a stop halfway through an 84-mile round-trip or as a part of a longer journey onward to the Isle of Skye.

Ride the Jacobite on the Bonnie Scotland private chauffeur

Explore Scotland during a 6-day private and fully customizable itinerary that includes a trip aboard the Jacobite on your way to the Isle of Skye. Other highlights include Edinburgh Castle, the Falkirk Wheel boat lift, Loch Lomond, and the Talisker Whisky Distillery. 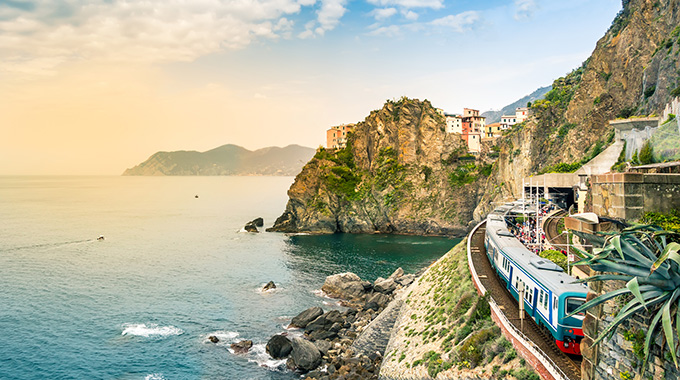 Cinque Terre—the dramatic stretch of Ligurian coastline with 5 colorful villages known romantically as the "5 lands"—is remarkable for its beauty, and also for its isolation. It's not easily accessible by road, so most visitors arrive via a train that connects the cliffside villages to one another and the rest of the Italian Riviera.

A series of tunnels and bridges allow the train to wind carefully along the rocky shore, giving riders a close-up view of this UNESCO World Heritage Site. A station in each town means travelers can easily get on and off wherever they want to explore, and it's just a few minutes on the train between them. Many tours include this train, but it can also be booked directly with the Italian national rail service Trenitalia, with service out of the towns of La Spezia and Levanto.

Ride around Cinque Terre on the Tuscany & the Italian Riviera package

This 9-day tour includes a visit to Cinque Terre by train as part of an in-depth tour of the Italian Riviera.

Learn more and book the Tuscany & the Italian Riviera package 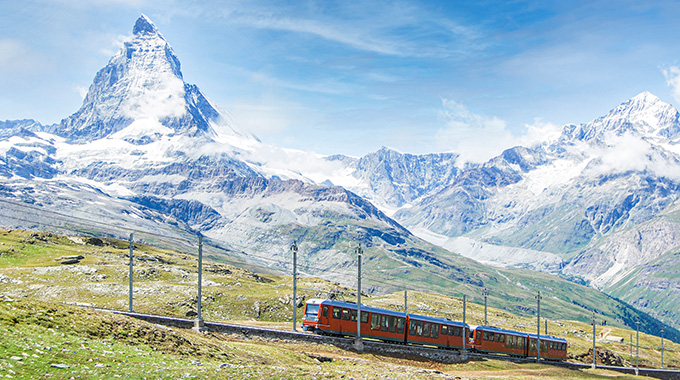 The Gornergrat Railway climbs at a steep angle through alpine meadows at high altitude.

Switzerland's towering Alps are home to many of Europe's most picturesque railway vistas, perhaps none as dramatic as the sight of the Matterhorn from the Gornergrat Railway. Beginning from the resort village of Zermatt, the cog-wheel train ascends almost 5,000 feet in just 5.8 miles.

There's plenty to see during the climb—most notably the bridge and waterfall near the Findelbach station—but the star is the stunning view of the Matterhorn's iconic north and east faces from Gornergrat peak, more than 10,000 feet above sea level. There's a hotel at the peak, if a few hours isn't enough time for you. And since Gornergrat doesn't close for the winter as many European scenic railways do, it's a premier way to experience the winter landscape.

This 12-day rail tour of Switzerland includes an optional excursion on the Gornergrat Railway, in addition to a funicular trip to the Sunnegga mountain resort. Other highlights include Neuchatel's historic quarter, vineyards on the shore of Lake Geneva, and a visit to Lucerne. 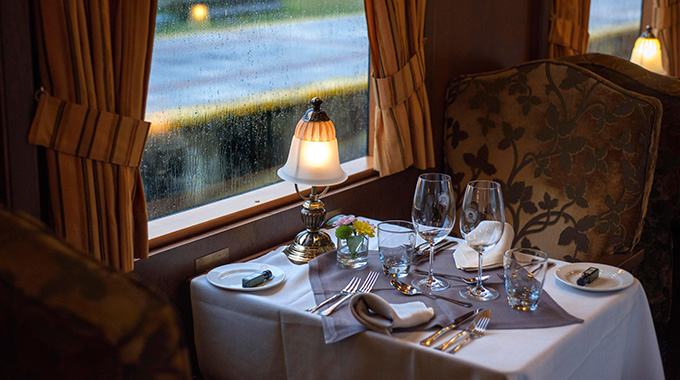 The interior of the restaurant car on the Transcantabrico.

Described by the operator as a luxury hotel on rails, this train is as much about seeing the sumptuous historic salon cars as it is the Cantabrian Mountains. Travelers spend 8 days traversing Spain's northern coast, going on excursions to charming seaside villages and historic cities like Bilbao and Oviedo. In between, they ride the train and take in the verdant views of "Green Spain," as the north is known.

The train stays at stations overnight, providing a more restful night and making sure none of the scenery gets skipped in the dark.

Book your Transcantabrico adventure with a AAA travel advisor

A knowledgeable AAA travel advisor can help you pick the Transcantabrico or other Spanish train itinerary that's right for you. 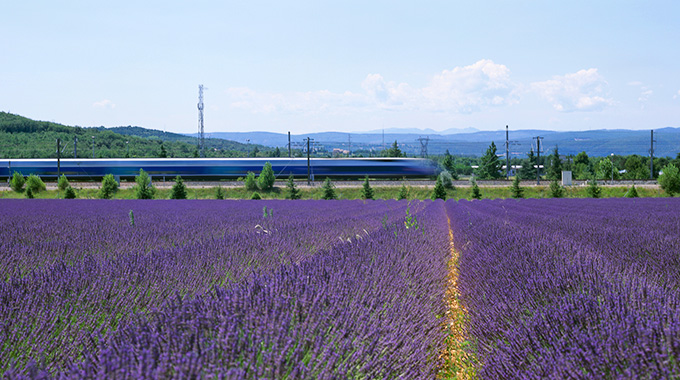 The TGV route between Paris and Marseille passes lavender fields in Provence.

5. The TGV from Paris to Provence

"Scenic route" usually denotes a slower, less direct path. Not so with the famous French TGV high-speed train, which covers roughly 400 miles of the bucolic French countryside between Paris and Marseille in just 3½ hours.

Along the way, riders can take in a gorgeous cross-section of the country, from the vineyards of Burgundy to the Rhone Alps and onward to the lavender fields of Provence. Plus, once you get to Marseille, all the beauty of the French Riviera is within reach—including regional trains with great views of the rugged southern coast.

Ride the TGV on the Essence of France package

This 12-day tour includes 3 days in Paris before taking the TGV through the countryside to Aix-en-Provence, near Marseille. Highlights include a truffle hunt, wine tasting in Provence, a Seine cruise, and a tour of the Nice flower market.

Learn more and book the Essence of France package 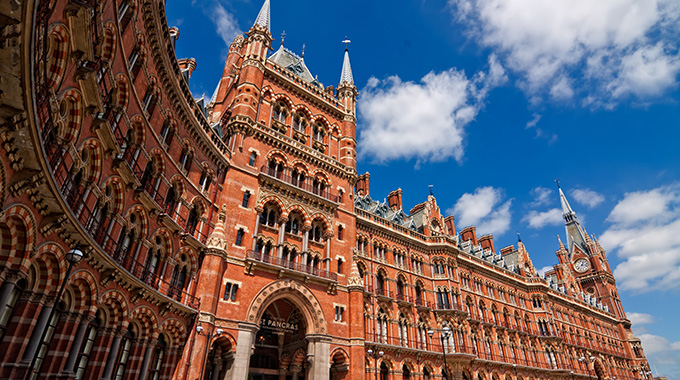 St. Pancras railway station is the London terminus of the Eurostar high-speed train.

If you like high-speed trains and France, the London-Paris Eurostar is an engineering marvel you shouldn't miss. It whisks travelers between the 2 capitals in just over 2 hours through the Channel Tunnel, descending to a maximum depth of 380 feet as it passes through 23 miles of tunnel beneath the ocean. And while there's not much scenery deep underground, the London terminus of the line at St. Pancras railway station is an especially beautiful work of architecture.

This 8-day tour includes a trip from London to Paris aboard the Eurostar as part of an in-depth tour of both cities. 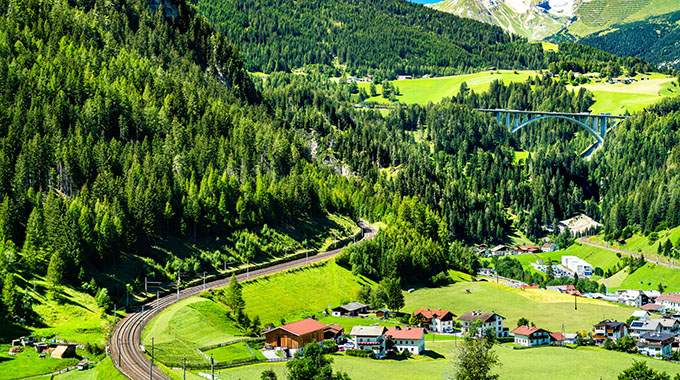 The Brenner Pass in the Austrian Alps, part of the Venice-Simplon Orient Express route.

With a history dating back to 1883, the Orient Express is Europe's most famous and celebrated rail route. The line originally stretched from Paris to Constantinople, and has taken various forms and routes through Europe in the nearly century and a half since.

Today's incarnation is the Venice-Simplon Orient Express, a luxurious rail experience featuring historic Orient Express cars from the 1920s and '30s. Though there are itineraries that go as far as Istanbul, the most popular runs from London to Venice. Along with the ornate interiors of the beautifully preserved rail cars, the route features impressive Alps scenery on the second day, with snow-capped peaks and charming towns in the Arlberg Pass, Brenner Pass, and Lake Zurich.

Book your Orient Express adventure with a AAA travel advisor

Whether you're looking to take the classic London to Venice route, ride all the way to Istanbul, or something in between, a AAA travel advisor can help you pick the Orient Express itinerary that's right for you. 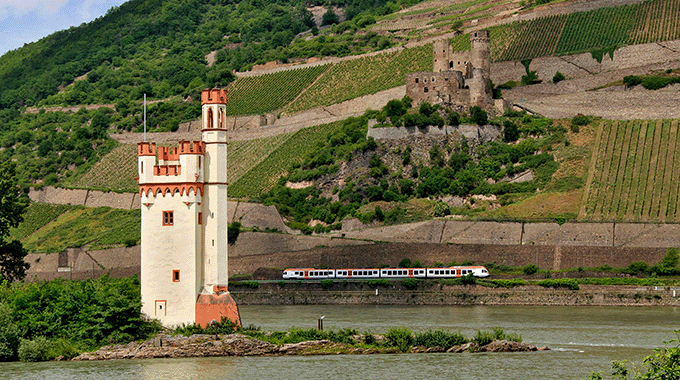 The route through the Rhine Gorge passes by the Mouse Tower (left) and Ehrenfels Castle.

7. The Deutsche Bahn through the Rhine Gorge

The classic way to take in the Teutonic beauty of the Rhine Gorge—a UNESCO World Heritage Site—is on a Rhine river cruise. But if you're looking for a shorter tour, or you prefer the comforts of solid ground, the Deutsche Bahn (Germany's rail service) between Cologne and Mainz runs right along the river's bank most of the way.

Highlights include dozens of ruined castles perched on the gorge's steep walls, terraced vineyards that rise almost vertically from the shore, and a steady stream of boat traffic of all kinds. The train runs along the river's west bank, so for a river view you'll want to get a seat on the lefthand side of the car if heading south (Cologne to Mainz), and the righthand side if heading north.

Whether you're looking to see just the Rhine Gorge or tour more of Germany by rail, a AAA travel advisor can help you pick the itinerary that's right for you.