Your guide to seeing the northern lights in Iceland

The northern lights over Vestrahorn mountain in Iceland.

Thanks to its location in what’s known as the “auroral zone,” Iceland is one of the most popular destinations for travelers looking to check the northern lights off their bucket list.

If you’re among them, here’s our guide on what to know before you go, and where in Iceland you can best observe this cosmic light show.

What are the northern lights?

Also known as the aurora borealis, the northern lights appear as shimmering ribbons of color in the sky. The Vikings attributed the sight to the fearsome Valkyries of Norse mythology, believing the lights were reflections from the warriors’ glinting armor and weapons as they descended to retrieve the souls of fallen heroes.

But what really causes this stunning visual?

The brilliant lights are caused when “solar wind” particles launched from the Sun collide with different gases in the Earth’s atmosphere. The gases involved and their concentration determine which hues show: Green, which results from a collision with oxygen, is the most commonly seen. 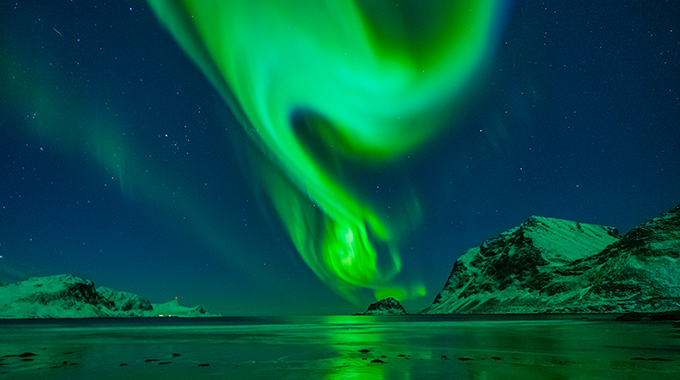 Green is the most commonly seen northern lights color.

When should you see the northern lights?

The northern lights are actually active year-round but near impossible for the human eye to see during summer, when skies at northern latitudes aren’t dark enough. Aurora-viewing season in Iceland is typically September through April, as the skies are darker for longer, giving you more opportunities to catch the aurora.

Dark skies make up just half of the equation, however—you’ll also need to account for the weather. Ideal viewing conditions are both dark and clear, so you’ll want to avoid the heavy rains that bring cloudy skies. If you’re unsure, the aurora forecast gives up-to-date information that can help you determine your likelihood of being able to see the northern lights on a given night.

As for time of day, successful viewings generally occur between 9:30 p.m. and 1 a.m. Not a night owl? Many hotels offer wake-up calls that will alert guests when the aurora appears.

On the upside, the Sun’s activity has been increasing as it heads toward the next solar maximum, predicted for July 2025. This means more solar particles will be headed toward Earth, likely resulting in more frequent and more visible aurora viewing over the next few years.

Where to see the northern lights in Iceland

Iceland is perfectly located in the auroral zone, which falls between 60-75° latitude, and is where the northern lights are most frequently seen. This makes it an ideal and extremely popular destination for people pursuing the northern lights.

This Nordic island nation is home to a multitude of natural wonders including volcanoes, geysers, and glaciers. Many of these may already be familiar to you as the settings for famous films and shows including Star Wars, James Bond, and of course, Game of Thrones. While the landscape is stunning in its own right, it’s also the perfect backdrop for viewing the northern lights.

With options including boat tours, private tours, or multi-day Iceland packages, seeing the northern lights is possible for travelers of all ages and experience levels. Whether you join a tour or venture out on your own, there are plenty of viewing points for the aurora borealis. Here are a few we recommend: 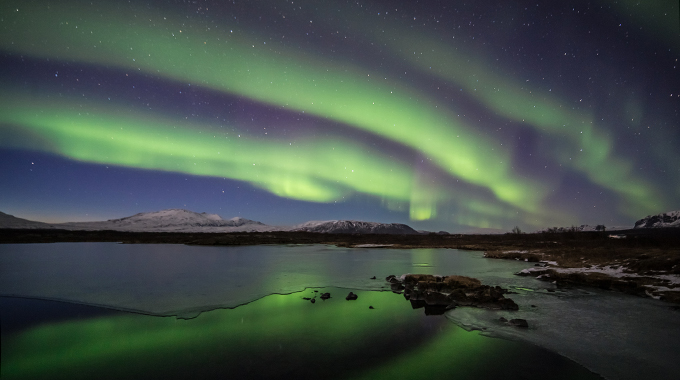 This UNESCO World Heritage site is a popular viewing spot for the northern lights, and for good reason: At 30 miles east of Reykjavik, it’s a quick drive from the capital city but far enough from its light pollution. By day, Thingvellir National Park offers activities including guided walks, fishing, and snorkeling. The visitor center includes an interactive exhibit detailing the park’s history. 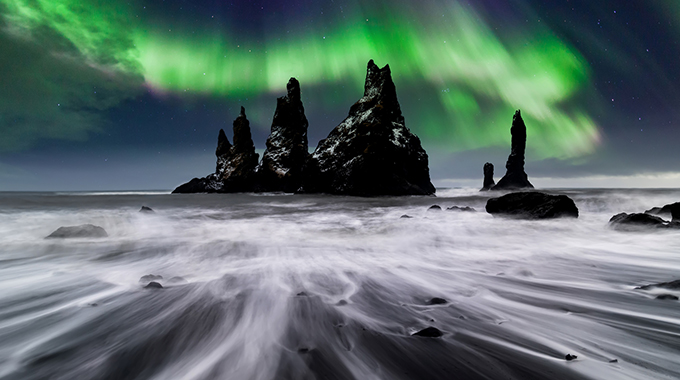 Reynisfjara beach is just a few miles from the small fishing village Vik. The black sand and Reynisdrangar basalt sea stacks rising out of the ocean will present a stark contrast against the glowing northern lights. But approach with caution, staying out of the water and never turning your back to the tide, as this beach’s infamous violent “sneaker waves” can appear even when the water seems relatively calm. 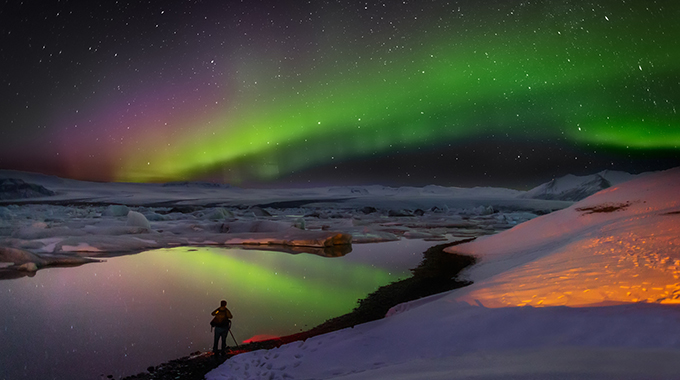 With a channel that connects to the Atlantic Ocean, Jokulsarlon Glacial Lagoon contains fresh and saltwater.

Soak in the sight of dancing colors amid waters studded with glaciers—and possibly the local seals—on the southeastern side of Iceland at Jokulsarlon Glacial Lagoon, fondly referred to as Iceland’s Crown Jewel. Watch the aurora reflect against Iceland’s deepest lake, which is filled with melted water from the outlet glacier Breidamerkurjokull.

Game of Thrones fans may know Kirkjufell as "Arrowhead Mountain" from seasons 6 and 7.

Looming over 1,500 feet high, the uniquely shaped Kirkjufell on the north shore of Iceland’s Snaefellsnes Peninsula is an impressive sight year-round. In the presence of the northern lights, the peak, also known as Church Mountain, seems to gesture up toward the heavenly hues. You can also reach nearby Kirkjufellsfoss, or Church Mountain Falls. 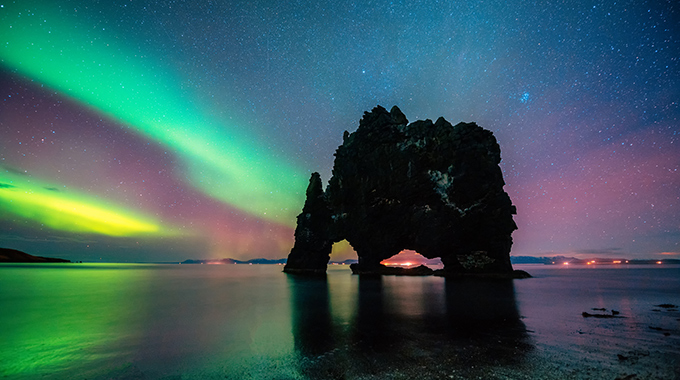 Over the years, Hvitserkur has been home to various seabirds, particularly gulls and fulmars.

Hvitserkur is a basalt rock stack standing 49 feet tall on Vatnsnes peninsula. Its distinctive shape featuring 2 arches was carved over the years by ocean waves. The base is now reinforced with concrete to protect from further erosion, preserving what many say resembles a dragon drinking from the sea (despite the lore that the rock is a petrified troll). As with any beach setting, be mindful of the tides, especially in low nighttime visibility. 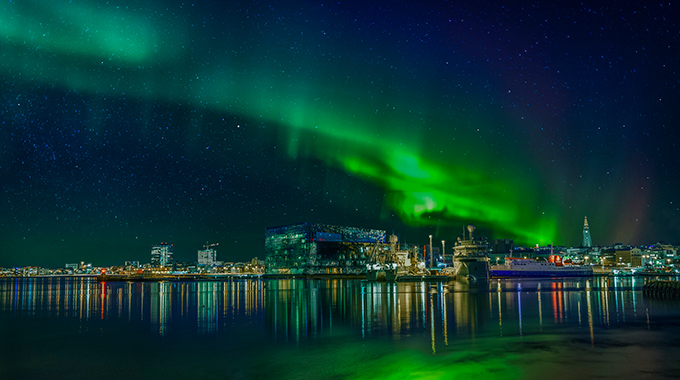 If your Iceland agenda has limited flexibility, it’s still possible to see the northern lights in Reykjavik. Lights throughout the city will likely dull the colors that would be more noticeable elsewhere, but you don’t have to miss out. To make the most of your circumstances, aim for a vantage point on the perimeter of the city so you minimize the interfering light pollution.

Don’t want to pursue the aurora borealis on your own? Travel Iceland’s famed Golden Circle on this 7-day, 6-night tour with AAA Member Choice Vacations®. Explore top sites including Thingvellir National Park, Gullfoss waterfall, and the Blue Lagoon by day, then search for the elusive dancing lights by night.

Uncover Iceland’s natural beauty on this 9-day, 8-night tour. Choose between a lava cave adventure or a lava field walk, then between floating in the Blue Lagoon or visiting the interactive exhibits at Perlan Center.