With spooky season just around the corner, it’s high time to plan a haunt-hopping road trip. From a historic tavern where you can rub shoulders with ghosts to a grim backroad through the shadowy forests of Alabama, here are 10 destinations worth experiencing ... if you’ve got the nerve.

This 50-foot span over Gold Brook, built in 1844, isn’t your average photogenic New England covered bridge—it’s also an infamous paranormal site. The residing specter, Emily, is said to have taken her own life after the lover she was supposed to elope with at the bridge stood her up. Drive through the bridge and you might find your car lined with scratches; walk through it and you might find yourself lined with scratches.

When you’re not experiencing Emily’s lingering anger, you’ve got Stowe’s all-around loveliness to enjoy—including Mount Mansfield, the highest peak in the Green Mountains and a Northeastern ski mecca; and some of the best fall colors anywhere. 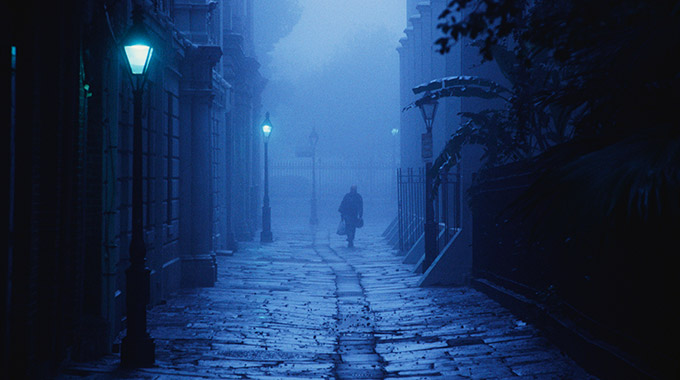 Pirate's Alley, home of Faulkner House Books in New Orleans, can take on an eerie appearance at night.

A well-known attraction along Pirate's Alley in New Orleans, Faulkner House Books is a fine little bookshop and a genuine literary landmark, where author William Faulkner lived in 1925 as he wrote his first novel, Soldiers’ Pay. Faulkner, who went on to pen such works as The Sound & the Fury and As I Lay Dying, is said to still reside at the house. The smell of tobacco—Faulkner was an avid pipe smoker—is often detected, and the great wordsmith sometimes appears at his writing desk, displayed inside.

You don’t have to look very hard to find other haunted sites in the Big Easy, not to mention some of the best food and live music in the world.

Situated in the lovely harbor city of Freeport, Jameson Tavern is one of the oldest watering holes in Maine. Opened in 1779, it’s nicknamed “The birthplace of Maine” because the paperwork splitting Maine from Massachusetts was allegedly signed here in 1820. The building’s long history ensures a full ghostly roster, which include the apparition of a tall man in a top hat, as well as the playful spirit of a young girl who lived in the attic in the 1800s and died in a fire.

After communing with the living and the dearly departed, consider paying a visit to the famous flagship store of L.L. Bean—founded here in 1912—and taking a hike at Wolfe’s Neck Woods State Park. You can weave your ghost-hunting stopover at Freeport into quite the awesome road trip along Maine’s Coastal Route. 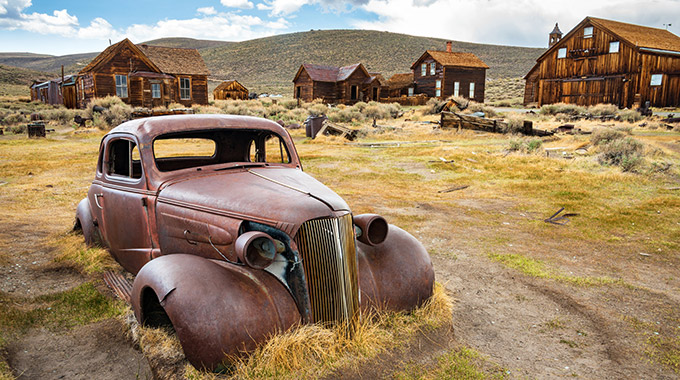 The wood buildings of Bodie State Park's ghost town have been preserved in a state of "arrested decay."

The tiny town of Bodie boomed in the 1870s after the discovery of a rich gold deposit. By the 1940s, Bodie had become a ghost town. Nestled in the hills east of the Sierra Nevada, it's now a state park that's home to hundreds of hauntingly beautiful abandoned buildings. They're preserved in a ghostly state called "arrested decay"—not restored, but maintained enough to prevent further breakdown. The town has its share of ghost stories, but perhaps the most eerie is that anyone removing objects from the park—no matter how small—is said to find themselves cursed with bad luck.

Make the most of your time in Mono County by visiting salty Mono Lake, then head to one of the region's many hot springs. If you're feeling adventurous, consider a trip south to Death Valley National Park.

Keep your eyes and ears open when you drive the bridge over Kipapa Gulch on O‘ahu. This ravine saw a ferocious battle centuries ago—Kipapa, or “paved way,” refers to ground paved with the dead—and is now thought to be a regular runway for the “Night Marchers,” the ghosts of slain Native Hawaiian warriors who proceed by torchlight to the ocean. Legend says the Night Marchers announce their afterhours procession with blown conch shells, drums, and chants, so take heed if you hear any. Bad luck (or worse) is said to befall those who fail to pay the proper respect.

Giving a nod to the casualties of a long-ago clash will round out your O‘ahu road trip, which otherwise might include the famous Waikiki Beach and the North Shore.

Instead of putting extra miles on your vehicle, rent an SUV with plenty of cargo space from Hertz. AAA members get all sorts of benefits when booking with Hertz, including discounts of up to 20% off base rates. Through Dec. 31, 2020, you can get 1 free day when you reserve 4.

Members also get the peace of mind that comes with Hertz's Gold Standard Clean, a 15-point sanitizing process for all rental vehicles. 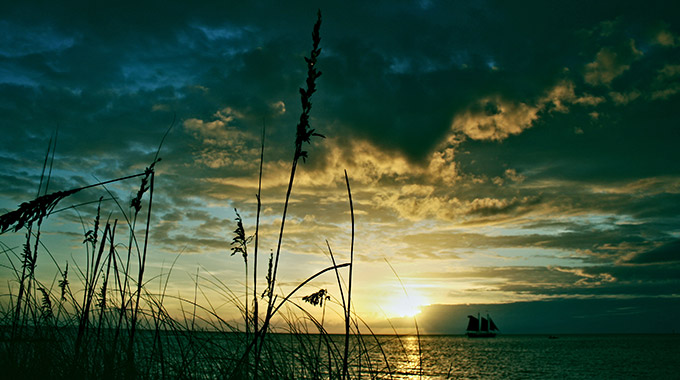 The British Navy killed the infamous pirate Blackbeard off the shores of Springer's Point in 1718.

Few pirates are such household names as old Blackbeard, aka Edward Teach, who raided ports along the southeastern American coast in the early 18th century. In 1718, Lieutenant Robert Maynard of the British Royal Navy finally defeated Blackbeard in Ocracoke Inlet in the Outer Banks near Springer's Point, hanging his decapitated head from a bowsprit and dumping the rest of him in the water—where, it's been told, his body circled Maynard’s ship 3 times before sinking.

On a stroll through Springer's Point, you might just spot odd underwater orbs of light, hear voices on the sea breeze, or even catch a glimpse of a vaporous figure—all said to be manifestations of Blackbeard’s ghost, still on the hunt for his shaggy head.

Surrounded by heavy woods, this unpaved road off Highway 7 near Hayden, Alabama comes rife with spooky baggage. Multiple deaths have occurred near Jack Cole Road, most caused by a cholera outbreak in 1900, but there have also been a fair share of the more violent or unexplained variety. The mummified remains of a woman were found in a cabin nearby, with some blaming her presence for the dark, mysterious happenings. Along with ghost stories, there have been occasional sightings of what appears to be a half-man, half-wolf.

If you’re feeling courageous, you will also want to visit the nearby Rickwood Caverns State Park and tour a labyrinthine, 260-million-year-old cave system. 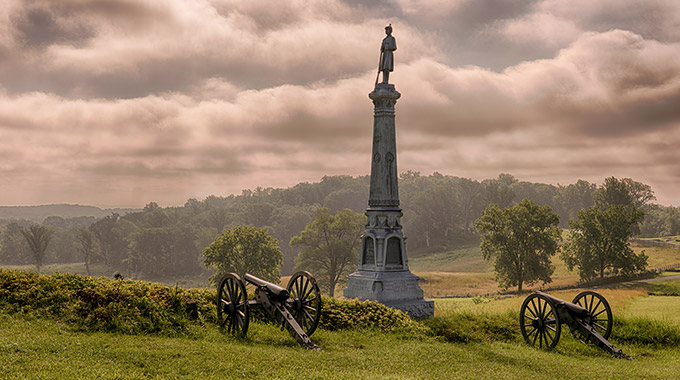 The battlefield at Gettysburg is now preserved as Gettysburg National Military Park.

The Battle of Gettysburg in July 1863 was the deadliest of the Civil War, with more than 8,000 killed among Union and Confederate forces over the course of 3 days. As a result, the battlefield and various sites in the town of Gettysburg have gained a reputation for being haunted. Ghostly gunfire and drumming, for example, are said to occur around Devil’s Den, where some of the fiercest clashes took place. Visitors to Daniel Lady Farm, where Confederate wounded and dying were tended to, report multiple ghosts, including General Richard Ewell’s.

Gettysburg is far from the only haunted site along a multistate tour of Civil War landmarks. About an hour away is Antietam in Maryland, the site of the bloodiest single day of the war, and its haunted Bloody Lane.

La Posada is different from many of the entries on this list. On the surface, it looks like a normal, non-haunted hotel, part of the Marriott brand. Its history runs deeper, though. The part of the resort known as the Staab House was built in 1882 by Abraham Staab, a merchant, and it's said that his wife Julia loved it so much that she never left, even after she died. The resort has embraced this legacy, even naming its restaurant Julia. Some guests claim to have seen and met Julia's spirit, and the house has been featured on a number of ghost-hunting shows.

Book a few nights at La Posada (which also bears a AAA Four Diamond designation), and explore the surrounding area, such as the petroglyphs and kivas of Bandelier National Monument, and the many shops and historic sites of the Turquoise Trail south of Santa Fe. Don't miss the Musical Highway on Route 333 near Tijeras, which has rumble strips arranged to play "America the Beautiful" when driven over.

The Grove, a house in the town of Jefferson along Big Cypress Bayou, ranks among the best-known haunted hotspots in the Lone Star State. Built in 1861 by Frank and Minerva Stilley, the Grove’s ghostly goings-on have been documented since at least the 1880s. Along with poltergeist-style occurrences such as flickering lights, mirrors falling off walls, and wet footprints materializing in hallways, the house includes several recurring figures. They include a flickery woman—the ghost of Minerva Stilley, some speculate—as well as a shadowy man frequenting the garden.

Privately owned but open for tours, the Grove is only one reason to stop in Jefferson. The little city includes plenty of other historical architecture such as a Carnegie Library and the Old U.S. Post Office and Courts Building, and the swamplands of Big Cypress Bayou offer fantastic paddling.

Turn your trip into an adventure with an RV rental

Members can visit a AAA branch for free maps and TourBooks1, or go online to use the AAA TripTik® Travel Planner, find maps in the AAA Map Gallery, check gas prices and road conditions, and much more.