What to do & see in Fairbanks during the summer midnight sun

Fairbanks is one of the few places in the United States where visitors can experience the cosmic summer phenomenon known as the midnight sun.

As the biggest city in Alaska's vast Interior region, it's also a gateway to unmatched natural beauty, from the pristine Chena River that flows right through downtown to the grandeur of Denali National Park's peaks and wildlife a mere 2 hours away. Here's what you need to know about the midnight sun, and what makes Fairbanks a special place to see it.

What is the midnight sun?

Because Fairbanks is just 140 miles south of the Arctic Circle, it experiences a little over 2 months of never-ending daylight from mid-May through the end of July, known as midnight sun season.

While the sun does dip below the horizon for a few hours each "night" during this time, it doesn't go very far. Instead, there's a twilight period a few hours long—similar to right after sunset in the Lower 48 states, with enough light to do outdoor activities—then the sun rises again. In the heart of midnight sun, from the beginning of June to mid-July, the sun is visible above the horizon at midnight.

Why does midnight sun happen?

In the northern hemisphere, days are longer in summer and shorter in winter. This is because the Earth is tilted by about 23 degrees on its axis, with the North Pole tilted toward the sun in summer and away in winter.

As you move closer to the North Pole in summer, the effect of the tilt becomes stronger and the days become longer until you reach so far north that on the longest day of the year, the sun simply loops around the sky rather than setting. That latitude is the Arctic Circle; every point within it experiences at least 1 day a year when the sun remains above the horizon for 24 hours.

While Fairbanks is south of the Arctic Circle, it's close enough to experience midnight sun and much easier to visit than the true Arctic.

What is there to do during the midnight sun?

A lot! Midnight sun is the biggest time of year in Fairbanks, which makes sense when you consider the town gets the opposite experience during the winter with months of uninterrupted darkness. 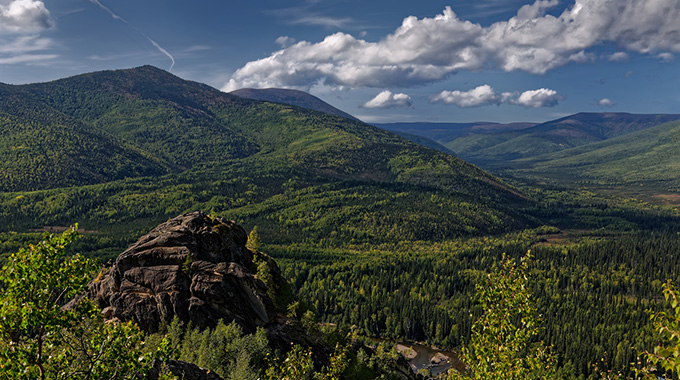 The view of the Chena River Valley from the Angel Rocks Trail.

Midnight sun means you can hike whenever you want—no need to finish the trail before it gets dark, because it won't! One of the most popular hikes is the Angel Rocks Trail, a 3.6-mile loop with 1,200 feet of elevation gain and incredible views of the Chena River Valley. The trailhead is 53 miles from downtown Fairbanks, so (like many things in the enormous Alaskan Interior) it's a bit of a drive, but the vistas are worth it. 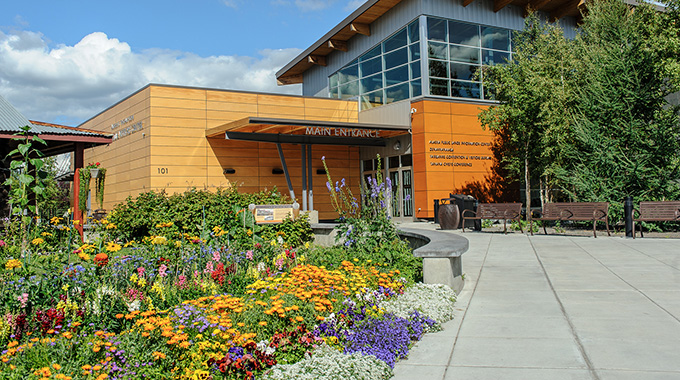 The Morris Thompson Cultural & Visitors Center and its flowers are one of many stops along the Chena Riverwalk.

Looking for a less strenuous trail closer to town? Amble along the Chena Riverwalk to see a cross-section of the city and the river in verdant summer form. Beginning at Pioneer Park, the route winds east along the river's bank for 3 miles, passing by landmarks like the town's curling club, convention center, dog park, and visitor center. Take in the greenery and blooming flowers along the river's edge and at parks along the way, and then stop by the Instagram-friendly Antler Arch near the visitor center for a selfie with more than 100 moose and caribou antlers.

Pioneer Park preserves buildings that show what Fairbanks looked like during the gold rush.

3. Travel back in time at Pioneer Park

The name is unassuming, but don't be fooled: Pioneer Park is a smorgasbord of Fairbanks history, food, and culture packed into a 44-acre city park. Historic buildings from downtown have been moved here for preservation and education, letting you walk down a gold rush town street and feel like you've been transported 100 years into the past.

On top of that, visitors can also check out the SS Nenana paddlewheel steamboat, explore a replica Alaska Native village, ride a narrow-gauge railway, and stop in to 2 museums dedicated to airplanes and trains—plus a working train they can ride around the park. In summer, there are shops and restaurants too, including the Alaska Salmon Bake. 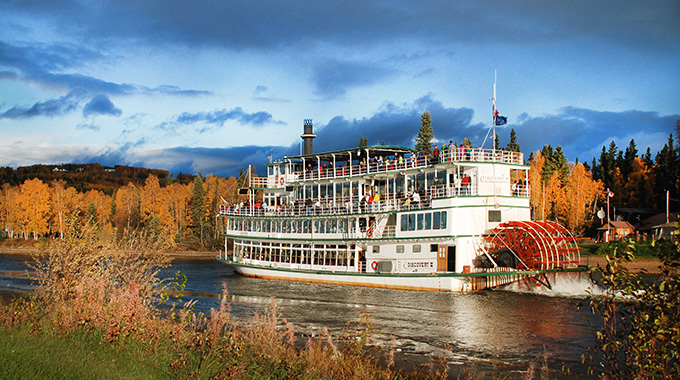 Sternwheeler paddleboats still cruise the Chena and Tanana rivers as they have for decades. | Photo courtesy of Riverboat Discovery

4. Set sail on a paddleboat tour

Leave the city behind and see the wilderness of the Interior aboard a real Alaska sternwheeler paddleboat with a Riverboat Discovery tour. This scenic 3.5-hour cruise along the Chena and Tanana rivers stops at a number of highlights, including the "wedding of the waters" where the 2 differently colored rivers meet.

There's plenty of human interest here, too. The tour stops in at the Chena Indian Village Living Museum, where visitors can learn about Athabascan culture and how native peoples survived an unforgiving climate. Later, a bush plane exhibition includes a live takeoff and landing in front of the boat. Then stop by the Trail Breaker Kennel to see what goes into raising and training sled dogs, complete with a mushing demonstration. 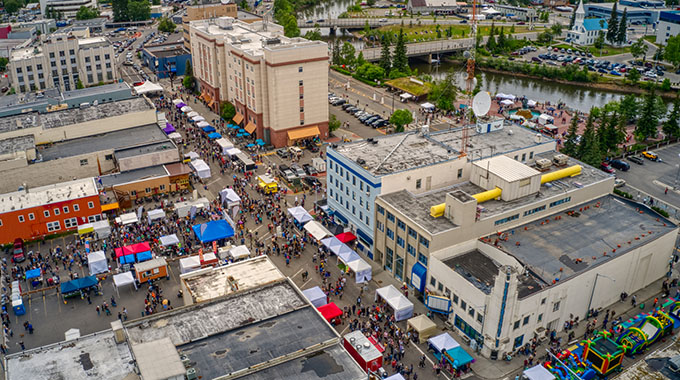 The Midnight Sun Festival is an annual 12-hour, noon-to-midnight celebration of the summer solstice.

Travelers and Fairbanksans alike flock to this annual celebration, which takes place from noon to midnight on a weekend day in June close to the summer solstice. Food trucks serve up popular fair dishes with an Alaska spin, while booths offer local art and wares. There's live music and other entertainment across multiple stages, plus a carnival midway to amuse the young and young at heart. The festivities routinely draw tens of thousands of visitors in a city of just 31,000 people.

In 1902, shortly after Fairbanks was founded, Italian immigrant Felix Pedro discovered gold north of town. The resulting Fairbanks Gold Rush isn't as well-known as the Klondike Gold Rush of the 1890s, but it shaped the development of the town as a gold mining center for the next half-century.

The legacy of gold mining is still here to be explored today. The most spectacular artifact is Gold Dredge 8, a massive floating "mechanical gold pan" that extracted gold from the river sediments near Fairbanks for over 30 years. Visitors can tour the dredge as well as the nearby Mining Museum to learn how miners lived and worked long ago, and even pan for gold themselves with help from a guide. 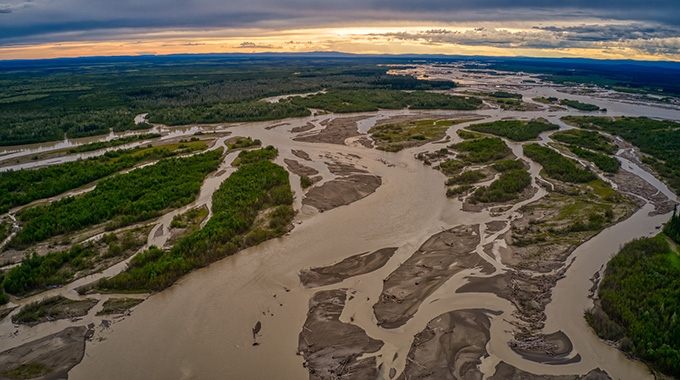 The Tanana River's many twists and turns offer plenty to explore by canoe and kayak.

7. Explore by kayak, canoe, or paddleboard

Another popular outdoor midnight sun activity is cruising around under your own power and at your own pace. Kayak, canoe, and paddleboard rentals are available both in town on the Chena River and also to the south on the larger Tanana River and adjacent Tanana Lakes Recreation Area. Explore the banks and bridges of the Chena up close on a paddle through town, or get closer to the wilderness just around the river bend on the Tanana.

Easily one of the crown jewels of Alaska, Denali National Park & Preserve puts the beauty of the Alaska Range on full display. While Fairbanks is 2 hours away by car, it's considered a major gateway to Denali because it's the closest major town and airport. (The next major airport, in Anchorage, is twice as far away.) Getting a glimpse of North America’s mightiest peak without its usual cloud cover is tricky; the best chance for an unobstructed view is in summer, specifically July and early August.

Discover Glacier Bay National Park, venture into Denali National Park, and stay at Princess’ own Wilderness Lodges in Fairbanks and Denali when you combine a 7-day cruise with 5 nights exploring Alaska by land.

Explore Fairbanks & beyond with the Alaska: America's Last Frontier package