European rivers compared: Which one should you cruise?

A vineyard along the Moselle River in Bremm, Germany.

There are many ways to see Europe, but you could make a solid argument that the view from the water is the very best.

River cruising here is partly an exercise in time travel: Roman ruins, hilltop castles, the essentially untouched medieval cores of towns and villages. The rhythm of a rivership tuned to the lazy current promises a slower-paced, more immersive journey into the heart of European landscapes.

Ah, but which European landscapes? The many options can be overwhelming. To help you sort these rivers, we’ve pulled together some of the choicest ones and highlighted their most notable attributes. You can’t really go wrong, but depending on what you’re most interested in seeing or doing, some may recommend themselves over others. 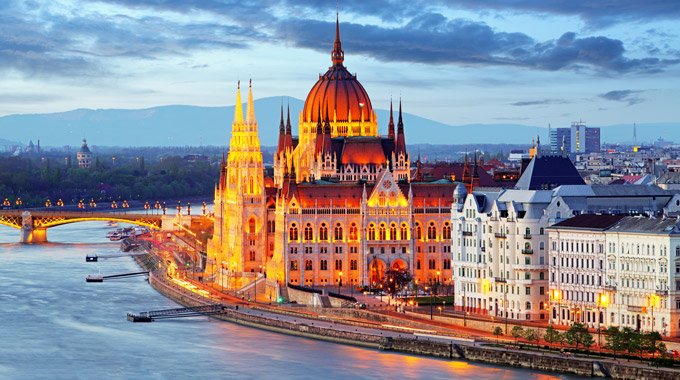 The Hungarian Parliament Building on the shore of the Danube in Budapest.

Rising in Germany’s Black Forest and flowing through 10 countries to its mouth in Romania’s Black Sea, the Danube is the second-longest of Europe’s rivers and among the most popular for cruises. Drenched equally in scenery and history, this mighty stream’s variety makes it a great choice for a first river trip in Europe: from magnificent cities such as Passau, Vienna, and Budapest to pastoral countryside and time-capsule villages.

Drink in Budapest’s magnificent riverfront architecture, catch a Viennese concert in the old stomping grounds of Mozart and Beethoven, and bicycle the terraced vineyards, orchards, and medieval villages of Austria’s famed Wachau Valley, a UNESCO World Heritage Site studded with commanding landmarks like the Melk and Gottweig Benedictine abbeys and the Durnstein and Schallaburg castles. Many cruises head upstream from Budapest, but those who take the downstream journey have plenty of beauty to admire, not least the spectacular gorges of the Iron Gates along the Serbia-Romania border and the sparkling Danube Delta.

Related story: Why you should cruise the Danube

Explore the Danube with a cruise aboard the AmaMagna

Enjoy spacious staterooms, award-winning dining, and an array of amenities with a Magna on the Danube cruise package. The AmaMagna is one of AmaWaterways' newest and most innovative ships. Magna on the Danube itineraries vary in length from 7 to 21 nights, so you can pick the package that fits your needs.

Browse and book AmaWaterways Magna on the Danube cruise itineraries 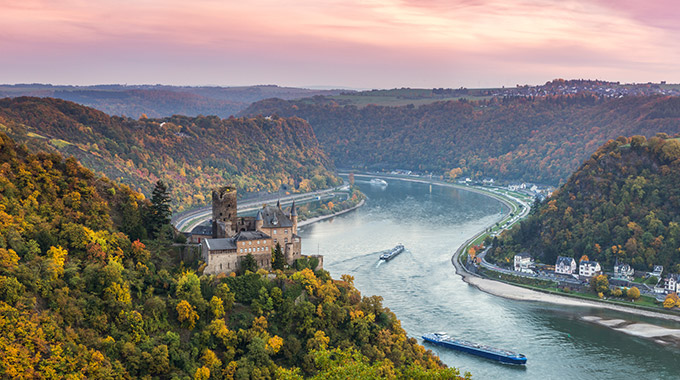 Katz Castle on the bank of the Rhine in St. Goarshausen, Germany.

The Rhine is the other classic “beginner-level” European river cruise. This roughly 800-mile flow, which begins in the Swiss Alps and empties to the North Sea in the Netherlands, has been one of Europe’s hardest-working drainages for a long time, and one of the most romanticized. No section’s more romantic than the one in Germany between Bingen and Koblenz known as the Rhine Gorge, honored by UNESCO as the Upper Middle Rhine Valley World Heritage Site.

The Rhine’s a great lineup for lovers of great cities, from Amsterdam and Rotterdam to Dusseldorf, Cologne, Strasbourg, and Basel. Fans of history—and anybody who can get behind some postcard-perfect blufftop keeps and battlements—swoon over the 40-odd fortifications looming along the Rhine Gorge, among them the Marksburg, Stolzenfels, and Katz castles and the Ehrenbreitstein Fortress. It’s overall a busier and more industrialized river than the Danube, but the Upper Middle Rhine’s sublime, and there’s incredibly rich history and legend, from the defining German epic of the Nibelungenlied to significant World War II history.

Related story: Why you should cruise the Rhine

Take a 7-night cruise aboard a Viking Longship and explore the rich heritage of the Rhine, heading south from Amsterdam or north from Basel—your choice. Optional pre- and post-trip extension options include London and Lake Lucerne. 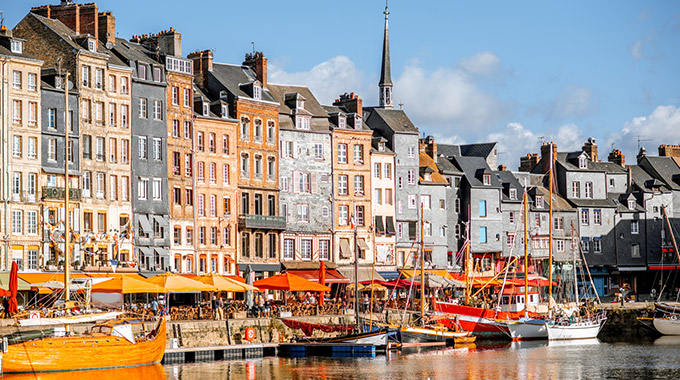 Row houses on the waterfront in Honfleur, France.

Some rivers on this list are wonderfully international. The Seine, by contrast, does its thing entirely in 1 country. Don’t let that deter you: That country is France, and the Seine’s course includes Paris, perhaps the most celebrated city in the world, and one that looks mighty fine from its heart-blood river. From the Eiffel Tower and the Louvre to the wonderful cafes and restaurants, the City of Light is the obvious centerpiece of a Seine cruise.

But it’s far from the only attraction. In Giverny, wander the world-famous gardens of Monet. In Rouen—capital of Normandy, and bursting at the seams with medieval history—ponder the legacy of Joan of Arc, who burned at the stake there. Marvel at the stunning architecture and cobblestone streets of Honfleur, and visit the Normandy landing beaches of D-Day. Exceptional cuisine and wine come with the territory; it goes without saying. Francophiles will most definitely want to take a cruise on this current, as will just about any history enthusiast or epicurean. 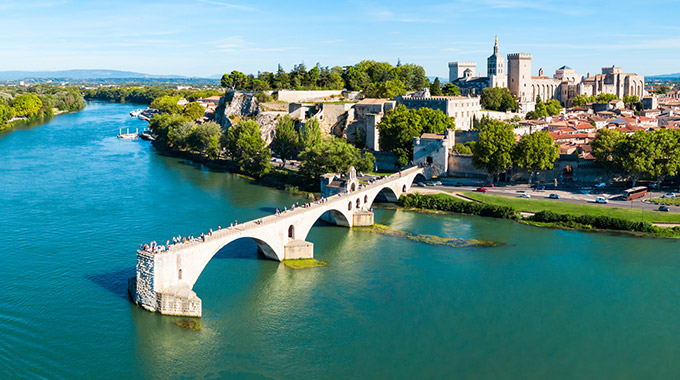 The Pont Saint-Benezet on the Rhone in Avignon, France.

While the Rhone materializes at the Rhone Glacier up in the Swiss Alps and flows through Lake Geneva, most of its course lies in France, where the classic Rhone cruises occur. You can consider it a southerly counterpart to the Seine. While the scenery’s certainly pleasant, this route—taking in such ports as Lyon, Arles, Avignon, Viviers, and Tournon—is primarily for gastronomes and history buffs.

Gastronomes on account of the impeccable wine ready at hand, hailing from such enshrined viticultural regions as Burgundy, Beaujolais, and Chateauneuf-du-Pape, not to mention classic French dishes including ratatouille and foie gras. And history buffs because of the plentiful historic structures and geographies: There are a fair amount of Roman relics along the way, such as the UNESCO World Heritage Site of the Pont du Gard, a spectacular aqueduct bridge. Nature fans will also appreciate excursions into the vast Camargue wetlands edging the Rhone delta, a precious repository of coastal wildness along the Mediterranean and home to the famous white Camargue horse and black Camargue cattle livestock breeds.

See the Rhone from one of Viking's Lyon & Provence cruises

Tap into your inner van Gogh at an Arles painting class. Discover Roman Provence at Les Arenes amphitheater and the Pont du Gard. Explore Avignon’s Palace of the Popes. Optional pre- and post-trip extension options for this 7-night itinerary include the French Rivieria and Burgundy vineyards. 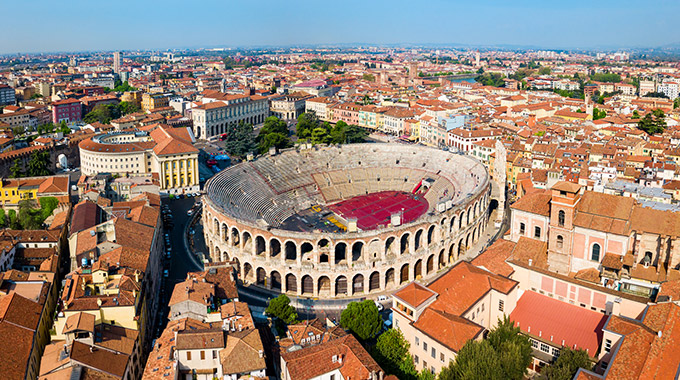 Choosing the Po—Italy’s longest river, flowing more than 400 miles through the heart of the country’s north—is an opportunity to enjoy a more intimate trip on a flow less trafficked by big riverships. It’s also a front-row ticket for outstanding medieval and Renaissance cityscapes, fabulous food and drink, and a look at one of Europe’s most significant natural areas.

While the Po proper doesn’t touch Venice, canals connect the river to this irresistible city, which dominates most itineraries. Cruise barges let you spend more time on the river while headed for Mantua. Between rivergoing sightseeing and motorcoach side trips, expect plenty of incredible cultural sites, from the UNESCO World Heritage Site of Ferrara and Mantua’s monumental Palazzo Ducale to the Roman amphitheater and Shakespeare byways of Verona. You can time your Po cruise to coincide with the region’s many summer celebrations, like the Venice International Film Festival or Ferrara’s Palio di San Giorgio extravaganza. Birdwatchers, meanwhile, covet the precious wetlands of the Po Delta, and gourmands have some of Italy’s signature culinary treasures—not least divine Parmigiano-Reggiano cheese—to sample.

Let the Po show you Venice & the Gems of Northern Italy

Along with the famed "City of Water," explore the waterfront shops, colorful facades, and peaceful canals unique to Burano, Mazzorbo, and Torcello. Then discover charming Chioggia, “bountiful” Bologna, and medieval Padua on this 7-night trip.

A vineyard along the Moselle in Trittenheim, Germany.

Several options on this list are oenophile-friendly, but for a wine lover’s river cruise, it’s mighty hard to beat the Moselle. This major Rhine tributary flows out of France’s Vosges Mountains, through Luxembourg, and into western Germany, where it meets its mother stream at Koblenz. The scenery along the Middle and Lower Moselle in particular is gorgeous, with steep slopeside vineyards and promontory castles marking a winding course sliced into the Rhine Massif.

Those vistas—which arguably attain peak beauty in the fall—are worth the price of admission, but when you combine them with fine Rieslings and other Moselle vintages, things get into heavenly territory. From cellar tastings to the numerous summer and fall wine festivals, you’ll have lots of opportunity to sample the local grape. The castles, meanwhile, are only one expression of the historical sites along the Moselle’s banks. The river passes through Germany’s oldest city, Trier, founded by Emperor Augustus in 16 BCE and host to such tremendous Roman relics as an amphitheater and the Porta Nigra gate.

This cruise collects 3 attractions in one itinerary: the Rhine, the Moselle, and the German spa town of Baden-Baden. Highlights include an optional bike tour along the Moselle, an evening visit to Cochem castle, and a panoramic tour of Trier. 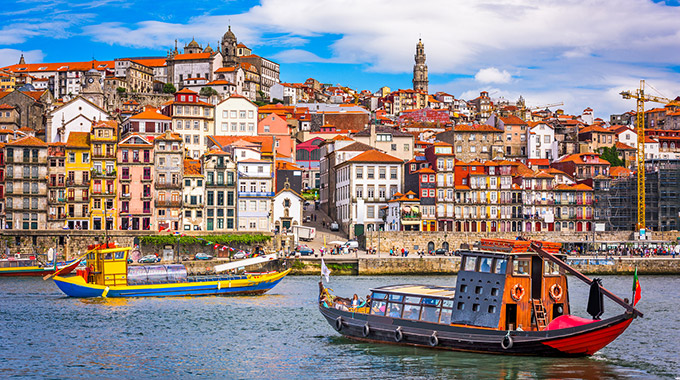 Boats on the Douro in Porto, Portugal.

Another European river that can hold its own with the Moselle in terms of wine appreciation is the Douro. This “River of Gold,” the most voluminous stream on the Iberian Peninsula, is still a bit of a best-kept-secret cruise destination, offering a quieter waterway with just as much top-notch food and drink, and just as much stunning architectural heritage, as higher-profile routes.

From the tasting rooms and cellars of Porto—the start and end of the typical Douro itinerary—to the sloping vineyards overlooking the Upper Douro, a cruise here doubles as a celebration of the region’s best-known export: port wine. But there’s also an abundance of historical landmarks along the Douro, which rolls past fabulously preserved medieval villages. A river trip here may take in multiple UNESCO World Heritage Site-listed cities, from Porto itself—among Europe’s oldest, founded by the Romans as Portus Cale—to Guinaraes and Spain’s Salamanca (both popular excursions). And the Upper Douro’s rugged landscape is wondrous.

Wind your way through the dramatic landscapes of the UNESCO-designated Douro Valley, heading ashore to visit charming quintas and meet the winemakers who operate them. In Salamanca, Spain, you’ll see the city’s famous university. Return to Portugal with a visit to the fortified village of Castelo Rodrigo and historic Guimaraes.

Get a AAA travel advisor's help by calling our dedicated travel advisor phone line, submitting a request for assistance online, or finding a AAA branch near you.