As I drive across the towering George P. Coleman Memorial Bridge to Gloucester Point, the York River looks intimidating, a powerful waterway pouring into the mouth of the Chesapeake Bay.

What would it have been like 400 years ago, I wonder, when Pocahontas or her father, Chief Powhatan, paddled these deep tidal waters in a dugout canoe?

This river was certainly familiar to the famous daughter and father. They lived upstream and would undoubtedly have explored the shoreline, likely visiting my destination today: a tiny peninsula not far from the bridge.

The small American Indian community that resided there grew corn, beans, and squash, and harvested oysters from the waters that surrounded their home. Archaeological evidence suggests people had been inhabiting the area for 10,000 years. Today, the land is once again a center for Native American life.

“Never in its existence has the commonwealth designated a site so replete with rich native history as Machicomoco,” said Stephen R. Adkins, chief of the Chickahominy tribe, at the park’s opening ceremony last spring. “This offers just a unique, unprecedented opportunity to tell those stories that have been held hostage so long.”

Indeed, I don’t remember learning much about the state’s original Native Americans from my fourth-grade Virginia history class. I’m happy the park is giving me another chance. 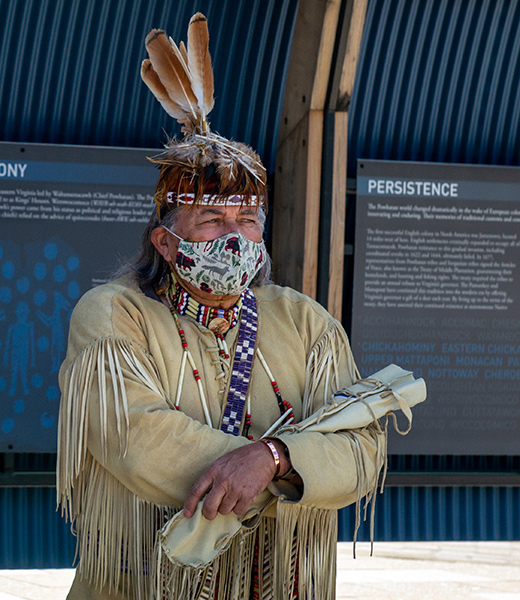 The 645-acre preserve was developed in consultation with the 11 Native American tribes recognized by the state of Virginia: the Chickahominy, Eastern Chickahominy, Mattaponi, Upper Mattaponi, Monacan, Nansemond, Nottoway, Cheroenhaka (Nottoway), Pamunkey, Patawomeck, and Rappahannock. The grounds were designed by Charlottesville-based Nelson Byrd Woltz Landscape Architects, which has worked on award-winning park and cultural projects around the world.

Shaleigh R. Howells, cultural resource director and museum director of the Pamunkey Indian Museum and Cultural Center, said Virginia’s other parks might typically have a marker mentioning indigenous people. At the new park, the story goes much deeper.

“It’s very different, it’s not 1 or 2 signs,” said Howells. “It’s solely based around the stories of Native Americans and how they want to tell their stories and history.”

Finding Machicomoco, though, proves a little tricky. I turn off busy US 17 and follow a county road past farms and rural homes. Just as I begin to wonder if I’m lost, nearing what feels like a gated community, I pull up to what I hope is the park’s entrance booth. (Spoiler alert: It was.)

As I learn, we are lucky even to have a park. More than a decade ago, the land was sold to developers, who built the entrance building, a floating dock, and a 3-mile ring road for a luxury subdivision. But the developer faced financial challenges, and before ground was broken on homes, a private foundation purchased the land and eventually donated it to the state in 2017 to make the park.

The area remains a sanctuary of woods, farm fields, creeks, and low-lying islands that might have been recognizable to Pocahontas and her peers.

While the park offers typical amenities, including a campground, boat launch, and small gift shop, it’s the interpretive area that draws me in on this sunny day. I drive about a mile from the entrance and stop in a parking area near a rise overlooking a tidal inlet. In front of me, a timeline of engraved stones covering 20,000 years of history runs across the ground for hundreds of feet.

The story of Machicomoco, I learn, begins in 18,000 BC during the last Ice Age, which created the Tidewater river systems that shaped Native American life here.

Walking the timeline, I see the American Indian story unfold. Thousands of years later, hunter-gatherers began to appear in coastal Virginia, eventually forming large settlements in the Chesapeake floodplains. Then came contact with Europeans, beginning with Spanish missionaries in 1570, leading to wars with the British, forcible removal from land, and, finally, centuries later, the park’s dedication.

Along the way, I pass native plants like sage, honey locust, and bluestem grass, and reach a shelter, inspired by the longhouses favored by Virginia’s American Indians.

The traditional buildings were constructed from saplings bent into hoops and then covered with bark and woven mats. Machicomoco’s modern version is made from steel and black locust timbers topped by metal panels.

The park’s location is significant because it was the gateway to Werowocomoco, the Powhattan Confederacy’s capital and ceremonial center, which was located about 10 miles upstream. (Considered sacred by Native Americans, the former capital is now owned by the National Park Service and closed to the public as it undergoes extensive archaeological research.) 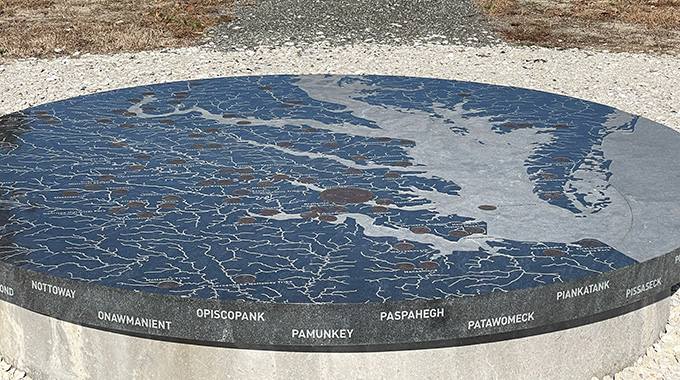 A map shows the reach of the Powhatan Confederacy. | Photo by Larry Bleiberg

That makes Machicomoco the best spot to learn about the Powhatan Confederacy. The group, which included 15,000 people from 30 tribes, began to form in the 1200s, and grew at its peak to cover 16,000 square miles, stretching from Washington, D.C., to the North Carolina border. Prime real estate, then and now.

Werowocomoco is also where Captain John Smith, the founder of Jamestown, was taken after his capture. During his time there, Powhatan, known as the “chief of chiefs,” offered to sell him the land that’s now Machicomoco park. 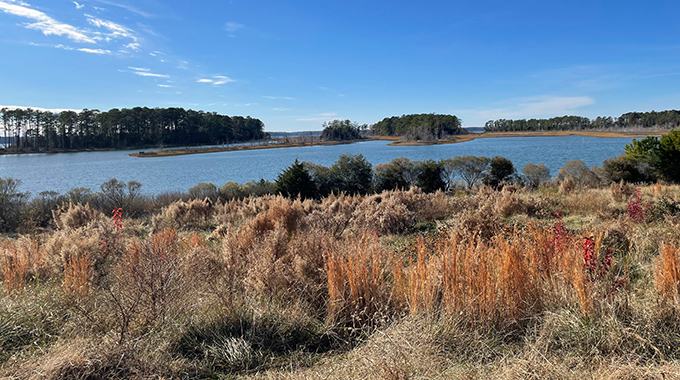 The park overlooks tidal creeks and inlets that lead to the York River. | Photo by Larry Bleiberg

The new park features 3 rental yurts and 5 miles of paths. Its handicap-accessible launch offers kayakers access to creeks and the York River, which American Indians called the Pamunkey. But throughout Machicomoco are places to learn about the land’s original inhabitants.

Strolling through the park, I find Algonquin words etched into boardwalks and steps. The culture begins to come alive through words like pissacoack, which means, “muddy place,” or mattapanient, which translates as “stopping place on a path.” 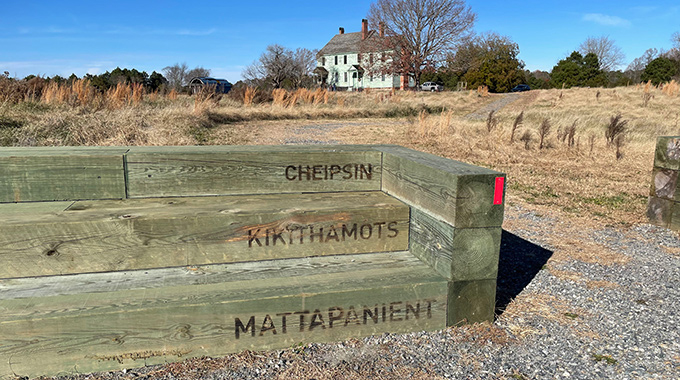 Algonquin words are etched into steps. | Photo by Larry Bleiberg

In another area, a panel describes the indigenous Virginian’s 5 seasons. Why, I suddenly wonder, did I assume there had to be 4?

For the Native Americans, living in the coastal plain meant an early spring period for planting and fish runs; summer for foraging wild plants; late summer and early fall for harvesting; late fall for feasts and ceremonies; and winter for forest hunts.

Earlier, I had asked Howells, the Pamunkey museum director, how best to experience the park. Take time to absorb it, she told me. Reflect on its complex history and admire the waterfront landscape, home to deer, foxes, turkeys, and, as I saw, an eagle’s nest with a commanding river view.

“It is culturally significant land for Native Americans,” she said. But there’s more to it. “It’s also really pretty.”

Looking out to the inlets, where pods of bottlenose dolphins often congregate and the sun gleams off the shifting water, I can’t disagree. And for all that has changed in the past 400 years, I have to believe that Powhatan and Pocahontas must have enjoyed the view too.

The park doesn’t have food, ice, or drinks, so pack accordingly or find other nearby options. For tasty waterside dining, YROC Coastal Bar and Grill is about a 10-minute drive from the park. (804) 792-1511; http://yrocbarandgrill.com. Or try Lulu Birds Kitchen in historic Gloucester for salads, dinner entrees, and more. (804) 210-1417.

Take a 50-mile drive northwest of Machicomoco to visit the Pamunkey Indian Museum & Cultural Center. The Pamunkey Indians were part of the Powhatan Confederacy, and this decades-old institution was the first opened by a Virginia tribe. Located on its 1,200-acre reservation, exhibits at the museum include a dugout canoe, ancient stone points, and a treaty signed with the English in 1677. Open by appointment. (804) 843-4792.

Head to the mountains to learn about tribal traditions at the Monacan Ancestral Museum. Near Lynchburg, the museum honors the Sioux-speaking Monacan, who once controlled much of Virginia’s Piedmont area and were rivals of the Powhatan Confederacy. The museum features an 1870 log cabin schoolhouse and a century-old mission church. Exhibits include pottery, baskets, beadwork, and photographs. Open Tuesday to Saturday. Call for appointment. (434) 946-5391.