Visit the homes of our country’s Virginia-born presidents

Monticello was the home of President Thomas Jefferson. | Photo by Ashley Twiggs

In the homes of Virginia's presidents, you'll get glimpses of our leaders' lives and personalities.

Virginia, as every fourth grader in the state learns, is the mother of presidents. Starting with George Washington, eight chief executives were born in the commonwealth, more than in any other state. And what a lineup they were: founding fathers, war heroes, and international innovators.

For most of us, though, names such as Madison, Monroe, and Harrison conjure colonial caricatures in stiff wigs. It’s only when you visit their homes that these figures come to life. It’s there you’ll find surprises such as a reconstruction of Washington’s whiskey distillery, a mastodon’s jawbone from Kentucky that fascinated Thomas Jefferson, or the still-functioning automobile that Woodrow Wilson loved.

This election year, why not take a step back in time and discover Virginia’s legacy of leadership at these eight presidential homes and libraries.

Info: Open daily, hours vary by season. Adult admission $17. With prior arrangement, travelers can bicycle to Mount Vernon from Theodore Roosevelt Island and return on a Potomac River excursion boat.

With a smartphone app, wine dinners, and a dog-friendly tour, the first president’s home is hardly a stuffy civics class obligation. Instead, think of Mount Vernon as a history theme park.

It’s easy to spend a day exploring the grounds on specialty tours, including one that visits the home’s basement and waterfront. A presentation in the visitors center’s 4-D theater re-creates George Washington’s chilly winter at the crossing of the Delaware River by “snowing” on the audience.

Even dogs are welcome on the All the President’s Pups tour. While pooches can’t enter the historic home, they can explore the grounds with owners on a five-stop route revealing what canine life was like during George’s days.

Historic trivia: Yes, Washington did have dentures, and they’re on display in the museum.

There’s no better way to understand Thomas Jefferson than to visit the house he designed. From its grand mountaintop siting to its graceful lines, Monticello shows that along with a mastery of words, the writer of the Declaration of Independence had an equally exceptional gift for architecture.

Jefferson’s genius announces itself in the entrance hall, where the massive clock he designed tells not only the time, but also the day of the week. Each chamber delves further into his world. In the cabinet room, an office space, visitors will find the revolving bookstand he designed that let him browse five tomes simultaneously, the colonial equivalent of having five computer windows open at once. His wine cellar connected via a dumbwaiter directly to the dining room, where the nation’s first foodie served delicacies he discovered in France, such as crème brûlée and vanilla ice cream.

Monticello doesn’t ignore controversy. Guides mention slave Sally Hemings and the likelihood she bore six children with the widowed president. Just outside the home stands Mulberry Row, an area of original and reconstructed cabins where enslaved and indentured servants lived.

Historic trivia: Monticello looks familiar because you’ve seen it all your life—on the back of the nickel. 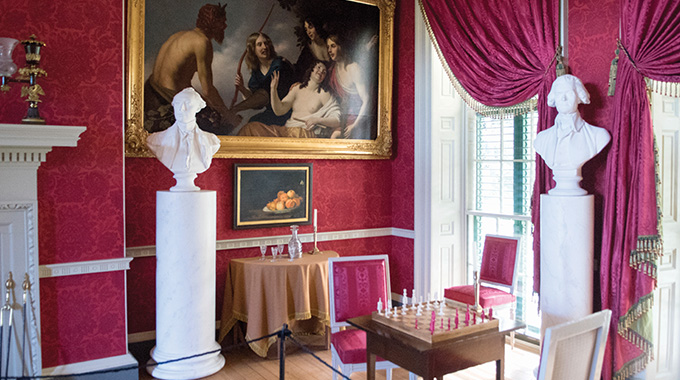 James Madison lived at Montpelier with his wife, Dolley. | Photo by Ashley Twiggs

Sometimes less says more. More than a decade ago, visitors to James Madison’s home would have found a sprawling pink stucco building with some 95 rooms—most added by the du Pont family, which purchased the property in 1901. But conservators gradually tore away additions, revealing the core brick building occupied by the fourth president and his wife, Dolley. It reopened in 2008.

Just two years ago, conservators restored the bedroom, which offered the First Couple sweeping views of the Blue Ridge Mountains. Across the hallway stands Madison’s Old Library, where he made history writing drafts of the U.S. Constitution.

Historic trivia: The towering cedar of Lebanon tree in the backyard is said to have been a gift from the Marquis de Lafayette. 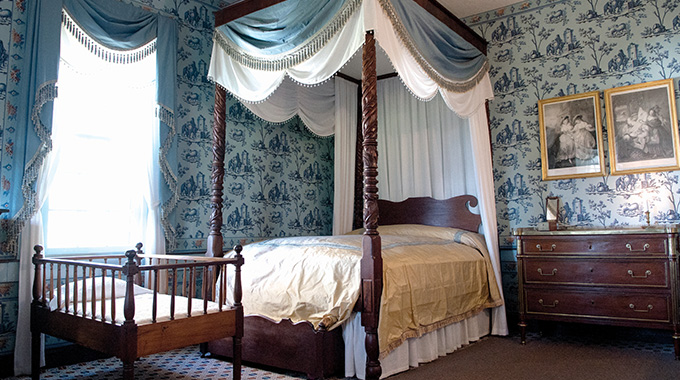 At the urging of his friend and mentor Thomas Jefferson, James Monroe built his home just down the hill from Monticello. Centuries later, Highland remains a work in progress. Archaeologists are still trying to determine the size and scale of the original house.

Today, visitors find a modest structure with period antiques. Some 80 percent have direct ties to the fifth president’s family, such as his bed and a sampler stitched by his daughter Maria Hester Monroe when she was 11 years old.

Historic trivia: The commanding bust of Napoleon said to have been presented to Monroe by the emperor himself.

Guides at his former law office like to say that Monroe may have been the best qualified president, having fought as a soldier and served as a diplomat and secretary of state. You can literally get a measure of the man when you see his carefully preserved clothing.

Historic trivia: First Lady Elizabeth Monroe acquired the coral tiara and other jewelry on display while the couple served on diplomatic duty in Europe.

The James River property has multiple claims to fame. Not only is it the birthplace of William Henry Harrison, our ninth president, but it’s also the site of the first Thanksgiving in 1619 (predating the Pilgrims by two years).

The religious celebration occurred that winter (on December 9 according to multiple sources, but the exact date is not known) when a ship named the Margaret reached the riverbank of what is now the plantation after a dangerous crossing from England. Captain John Woodlief and the 38 settlers aboard were so relieved at their safe passage that they dropped to the ground in prayer, declaring that the event should be forever honored as a day of thanksgiving. In 1962, President John F. Kennedy’s administration acknowledged the moment as the nation’s first Thanksgiving.

Harrison had the shortest tenure of any American president. He died of complications from pneumonia on his 32nd day in office

Historic trivia: On a house tour, a costumed guide explains how Harrison found fame as a war hero in present-day Indiana. His presidential quest’s catchy slogan, “Tippecanoe, and Tyler, Too,” refers to a Harrison war victory, while Tyler refers to his Virginia neighbor and running mate, John Tyler.

This plantation near the James River was home to John Tyler, who was born in 1790.

That’s not a typo: The 10th president married a much younger woman and had a son when he was 63. That son had children when he was in his 70s, and one, Harrison Ruffin Tyler, is now 91.

House tours are by appointment and reveal the expected antique furniture and family oil portraits, along with modern color photos of the current Tyler family. The building stretches slightly longer than a football field, making it one of the longest wood-frame houses in the country. One room hosted society balls, where couples would dance the Virginia reel until the wee hours of the morning.

Historic trivia: Along with historic plantings, such as a gingko tree that U.S. Captain Matthew Perry brought to Tyler from Asia, you might see toys in the backyard. Tyler’s youngest descendants are regulars here now, too. 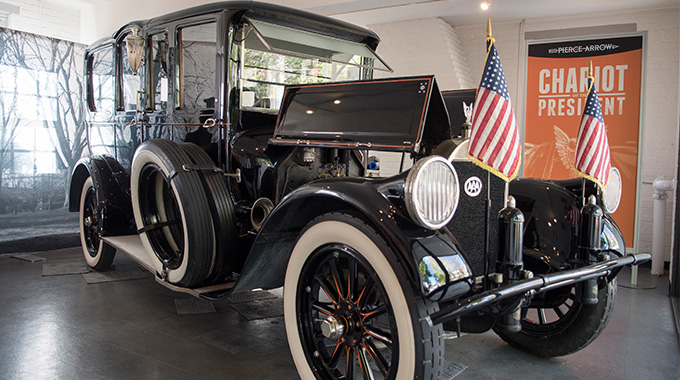 The most recent Virginian president spent only his first year in this home, which belonged to Staunton First Presbyterian church, where Wilson’s father was a pastor.

Next door, a museum introduces us to the only president to hold an earned PhD. In the basement, a moving exhibit depicts the First World War’s brutal trench warfare. Another display covers the League of Nations, which Wilson fought unsuccessfully for the U.S. to join.

Historic trivia: The Pierce-Arrow limousine still runs. Note the AAA insignia on the radiator. Wilson was the first U.S. president to join AAA.