Completed in 1881, this black-and-white structure is one of two Cape Henry Lighthouses at Fort Story. | Photo by jayyuan/stock.adobe.com

At the top of the original Cape Henry Lighthouse in Virginia Beach, after climbing 90 feet of winding metal staircase, I looked out at the Atlantic Ocean and Chesapeake Bay. The sky appeared milky in the hazy sunshine, and a few pleasure boats bobbed on the waves. Commissioned by George Washington, this lighthouse has stood here since 1792, overlooking the spot where storm-tossed settlers from England landed in 1607 and claimed this land for King James I.

Those settlers seeking freedom and fortune didn’t know it, but they started a process that led to the creation of the United States of America and the republic that exists today. To get an idea of how it all happened, I drove along 171 miles of Virginia highway and back roads through 400 years of history, starting in Virginia Beach and ending just north of Richmond. It was a journey of discovery that told me much about our nation’s evolution over the four centuries.

The legacies of the people who inhabited these sites live on today, not just in the United States but around the world. 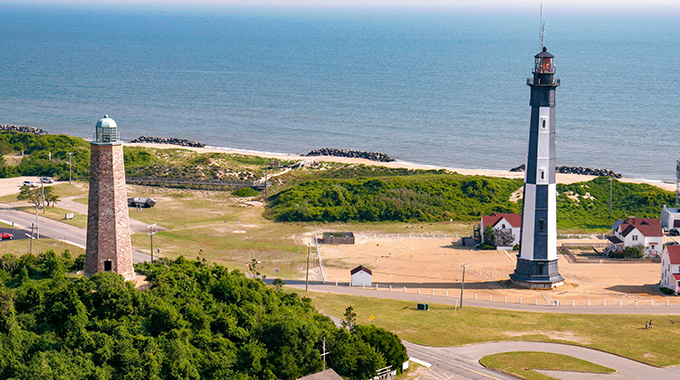 The federal funding for the original Cape Henry Lighthouse (left) was authorized by George Washington and overseen by Alexander Hamilton. | Photo by RosaIreneBetancourt 12/Alamy Stock Photo

This 90-foot octagonal sandstone lighthouse topped by a glassed-in lantern room was the first public works project initiated by the fledgling U.S. government. “It’s the real thing, not a replica. It’s the actual first,” says Fred Pringle, from Pataskala, Ohio, and a member of the United States Lighthouse Society. “And it has a great view.” (A second, still-active lighthouse nearby, a black-and-white cast-iron tower, was completed in 1881 but is not open to the public.)

Info: Cape Henry Lighthouse is located within Joint Expeditionary Base Little Creek–Fort Story. Show identification at the gate, then board a shuttle to the lighthouse. No firearms are allowed on the base. Original-lighthouse general admission, $10. 583 Atlantic Avenue, Fort Story, Virginia Beach; (757) 422-942. 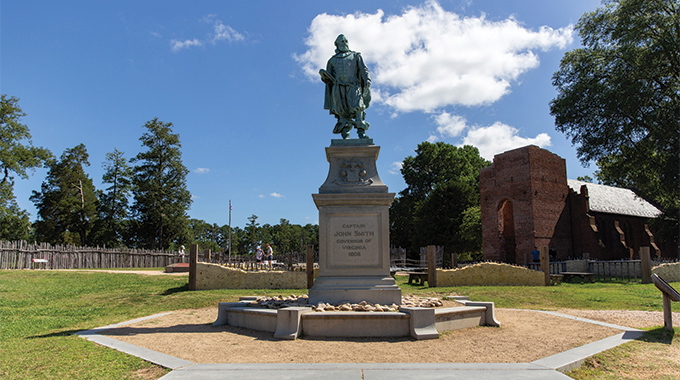 A statute of Captain John Smith, one of the first settlers of Jamestown, is located within the outlines of the original James Fort. | Photo by Parker Michels-Boyce

Two weeks after the 1607 landing at Cape Henry, 104 Englishmen and boys arrived at an island on the James River and established Jamestown, the first permanent English settlement in North America. Recent digs have located the original fort site that had long eluded archaeologists. Another dig revealed bones that archaeologists believe may be the remains of Sir George Yeardley, who presided over the first meeting of the Virginia Assembly here in 1619. That same year, Yeardley purchased some of the first enslaved Africans in the Virginia colony. If the bones are Yeardley’s, they would provide a tangible link to the sad paradox of U.S. history: self-government and slavery. Many artifacts unearthed here are displayed at the Archaearium, including armor, tools, coins, children’s toys, religious objects, and even skeletons of early settlers.

Guests can join Smith’s Fort guides for a walking tour on Friday, Saturday, and Sunday. | Photo by Parker Michels-Boyce

After leaving Jamestown, I crossed the James River to Surry County aboard the Jamestown–Scotland Ferry, a free car ferry run by the Commonwealth of Virginia. In 1609, John Smith, president of Jamestown Colony, and a company of men crossed near here by boat to build a fort not far from the ferry landing. Smith never completed the fort. All that remain are a mound and a trench on a heavily wooded bluff.

“These are what’s left of the oldest existing aboveground English structure in all of North America,” said Tom Forehand, site coordinator at Smith’s Fort Plantation. The site sits on land that once belonged to Pocahontas’ father, Chief Powhatan, who gave the surrounding 2,000 acres as a dowry gift upon her marriage to John Rolfe in 1614.

Near Smith’s Fort is a small manor house built by the Faulcon family around 1765. Period furnishings reflect the lifestyle of Virginia’s emerging middle class, many of whom, including the Faulcons, would take up arms in the patriots’ cause in the American Revolution. 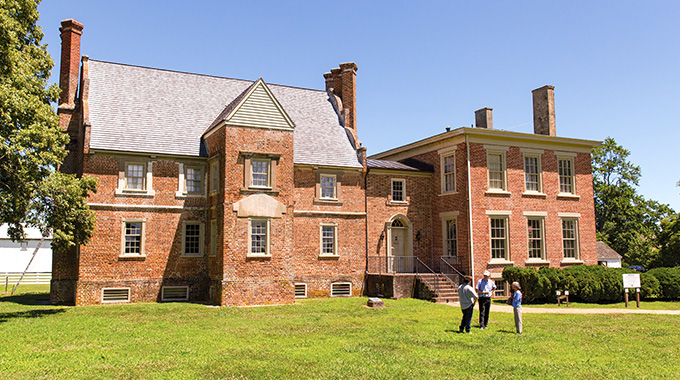 It’s strange that the eastern Virginia countryside is home to a mansion that looks as if it’s right out of Jacobean England (1603–1625). Curvilinear Flemish gables adorn the roof, and rare triple-stacked chimneys set at an angle stand on either end. Completed in 1665, the house is the oldest standing brick house in North America, and one of only three Jacobean structures in the Western Hemisphere.

Bacon’s Castle is actually a misnomer. It is not a castle. Nor did Nathaniel Bacon, for whom it is named, likely ever set foot in it. Bacon led a revolt against the Virginia Colony in 1676. His troops occupied and gutted dozens of homes owned by Loyalists, including this one.

The human touches resonated with me … a child’s note scrawled on a playroom wall: this day i am sick, sept 20, 1886. And a love letter and poem etched on a pane of glass that was written by Dr. Emmett Robinson to his wife, Indiana Allen Henley Robinson. 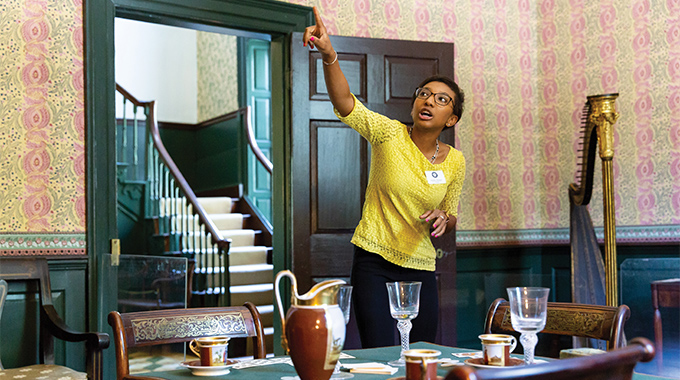 This brick Georgian-Federal house in downtown Richmond was John Marshall’s home from 1790 until his death in 1835. As chief justice of the United States from 1801 to 1835, Marshall made the judiciary the coequal branch of the federal government that it is today. “The original settlers wanted to build a society based on economic freedom and the rule of law,” said John Pagan, professor emeritus of law and history at the University of Richmond. “John Marshall interpreted the Constitution as the framers’ attempt to achieve those goals.” In a way, his views embodied the dreams of those settlers who landed at Cape Henry in 1607.

During my visit, I learned that Marshall was a slave owner and an ardent Federalist. He was devoted to caring for his wife, Polly, who suffered from melancholia. He also was an avid quoits player. Former site coordinator Ashley Ramey pointed out the round metal quoits rings that players try to toss onto metal stakes. They’re on display in a small room interpreted as the room of Robin Spurlock, one of Marshall’s slaves. Marshall particularly enjoyed Spurlock’s quoit punch, a powerful blend of rum, cognac, and Madeira.

Simple things, such as Marshall’s shaving kit, spoke to everyday life in that time. I also viewed a letter from George Washington, Marshall’s hero, offering him the attorney-generalship. Marshall turned him down; he had to tend to Polly and to his law practice. 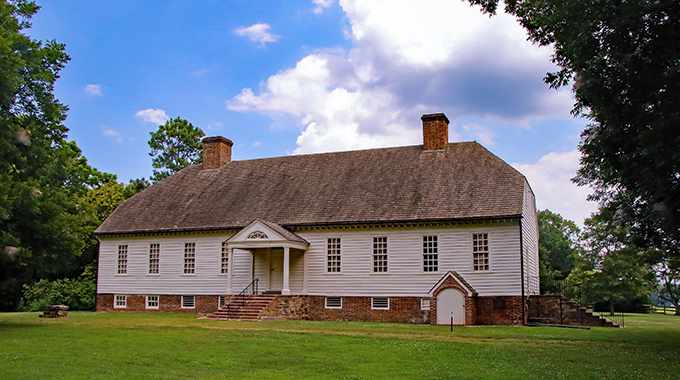 Patrick Henry is said to have conceived his famous “Give Me Liberty” speech in Scotchtown, the only original standing home of his that’s open to the public. | Photo courtesy Beltway Photos

I continued northward to Patrick Henry’s home. The Founding Father bought this 1719-era house in about 1770 and while living here, he may have written his “Give Me Liberty” speech, really the only thing I’d known about the man. Henry delivered that speech while deeply grieving the death of his first wife, Sarah, just a month earlier, said interpreter and site coordinator Susan Llewellyn. The place presents a comprehensive picture of Henry, the plantation owner, lawyer, family man, and politician. “Too often he is reduced to a caricature—the angry orator,” Llewellyn said.

Henry lived here until 1778 and served as Virginia’s first post-colonial governor. He had 17 children by two wives, and most of his possessions were divided among his heirs. Among Henry’s items remaining in the house are a chair in the master bedroom, a tea caddy in the parlor, and a map table owned by his father, John.

Henry’s influence, like Marshall’s, lingers long after his death. A small museum in the house shows how his ideas of liberty, drawn from the Enlightenment, have affected the modern civil rights movement, and may have influenced the protests at Tiananmen Square in 1989 and even the Arab Spring just a decade ago.

James F. Lee is a freelance writer who has written for the Washington Post, Los Angeles Times, and Boston Globe.