Springtime is when gardens return to life. After months of chilly weather, the landscape shakes off its sepia tones and erupts in color.

Travelers will find that Virginia offers a huge range of flowery scenery, from tiny backyard gems like the Anne Spencer House and Garden Museum in Lynchburg to the seemingly endless acreage of Norfolk’s Botanical Garden.

Take a spin around the state to see what gardening wizards can accomplish. It’s a chance to marvel at Mother Nature and enjoy a colorful stroll on a spring day. 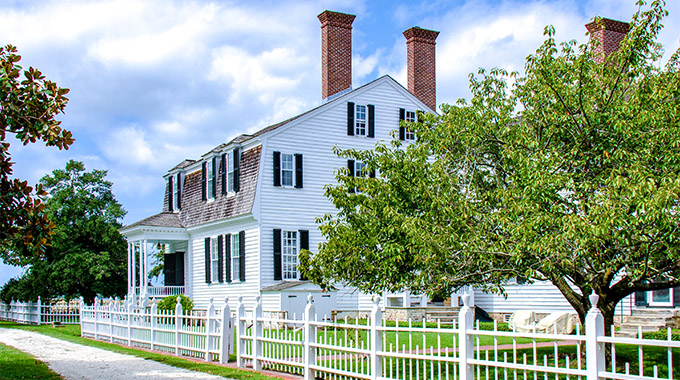 The historic Eyre Hall house is one of Virginia's best preserved colonial homes with one of the oldest gardens in the U.S. | Photo by Paul Diming

As you head down the cedar-lined lane to Eyre Hall, it seems you’re entering another world—or at least another century.

The dirt driveway off US 13 on the Eastern Shore leads to a secret colonial garden, a place lined by boxwood hedges and dwarf cedar planted more than 200 years ago and surrounded by walls made from bricks brought across the ocean as ship ballast.

During the spring, the garden beds bloom with tulips, calla lilies, and other perennials. Come mid-summer, the crape myrtles steal the show.

The Eyre property, a National Historic Landmark, has remained in the same family since the 1700s. The home itself welcomes visitors on special occasions like Virginia’s Historic Garden Week, which offers ticketed tours this year on April 24.

Must see: Walk a path lined with daffodils and wander the ruins of an 1818 orangery, a historic building once used to protect fruit trees. Nearby, there’s a timeless view over a Chesapeake Bay inlet.

Garden lore: You’ll often have the garden to yourself because it’s really not a tourist attraction, but rather a privately owned property that the owners allow the public to access.

The majestic Korean Bell Garden is a must-see at the Meadowlark Botanical Gardens in Vienna. | Photo by refrina/stock.adobe.com

Visitors find artful displays of azaleas, tulips, and hostas, but much more. There’s also an ornamental grass collection, dwarf conifers, and most memorably, 100 cherry trees of 20 different varieties. When they flower each spring, they offer a less-crowded alternative to Washington’s famous National Cherry Blossom Festival. (Generally, the trees bloom about a week after those in D.C.).

The garden, run by the region’s park authority, includes a collection focusing on plants from the Potomac valley, along with areas devoted to Virginia’s wetlands and native trees.

In 2021, it opened a new conservatory, and throughout the year, it offers special events like wildflower and birding hikes. But many come just to walk its paths and enjoy the rolling Piedmont landscape.

Must-see: The Korean Bell Garden is the only of its kind in the Western Hemisphere. Unlike precisely manicured Japanese gardens, it feels wild and natural. Built on-site by master craftsmen, it centers on a 3-ton bell, which hangs in a pagoda-style pavilion constructed without nails. The garden is surrounded by eerie stone statues carved from volcanic stone.

Garden lore: Once owned by D.C. couple economist Gardiner Means and historian Caroline Ware, the property was the family’s home for 45 years. In 1980, they donated the land to be developed as a public garden. 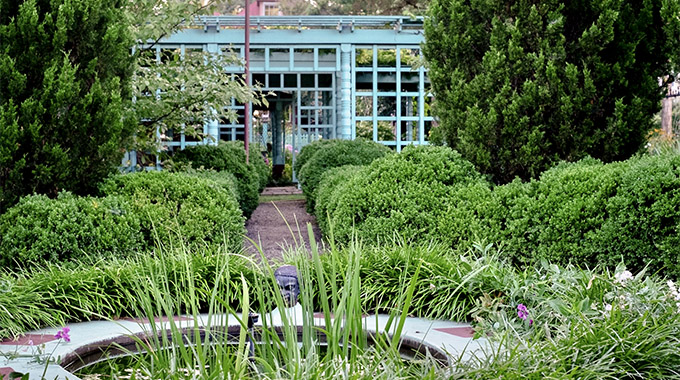 Much of Anne Spencer's poetry was inspired by her lush garden, which is now open to the public. | Photo by Anne Spencer House and Garden Museum Inc. Archives.

In a backyard garden, off a Lynchburg side street, one of the top figures in the Harlem Renaissance found her muse.

Poet Anne Spencer was born in 1882 and illiterate until age 11, but later graduated as valedictorian of Virginia Theological Seminary and College. Eventually, she became an accomplished writer and civil rights activist, and she was even featured on a postage stamp in 2020.

She and her husband, Edward, built their home and backyard garden. Measuring 125 feet long by 45 feet wide, the garden includes a fountain, a grape arbor, and a wisteria-covered pergola painted robin egg blue. Grass and stone paths lead by flowering shrubs, roses, and bulbs, some originally planted a century ago.

In a poem, Anne Spencer once called the garden “half my world,” and today, walking the sunny grass path, visitors can understand why it played such a large role in her life.

Must see: Don’t miss the writing room at the garden’s center. The building was named Edankraal, a combination of Edward and Anne’s first names, plus the Afrikaans word kraal, meaning “enclosure.”

Info: The home is open by appointment, while visitors are welcome in the garden year-round. $15. annespencermuseum.com. 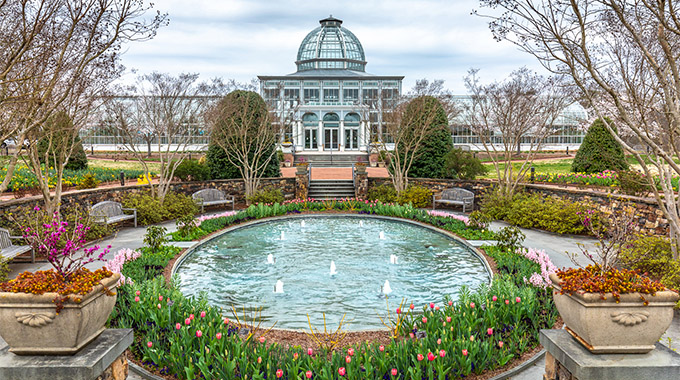 The 11,000-square-foot glass conservatory houses rare and exotic plants from around the world. | Photo by Thomas Hennessy

With a classic glasshouse, a fountain in a sunken garden inspired by ancient Rome, and a rose garden with hundreds of plants, Lewis Ginter Botanical Garden offers an elegant escape just outside the state’s busy capital city.

But the 82-acre botanical garden isn’t just about pretty landscapes and plants. It also has a kitchen garden growing produce for area food banks, and a children’s garden with a wheelchair-accessible treehouse.

Another section nods to the East. Step through a wooden moon gate to the Asian Valley Garden, complete with a teahouse, a pond, a waterfall and dramatically shaped trees. Wandering through the scenery, downtown Richmond seems continents away.

Must-see: The glasshouse conservatory feels lifted out of Victorian England but was built in 2003. The 63-foot central dome allows plenty of room for palm trees, while its three wings include a butterfly garden, and areas for orchids, succulents, and cacti.

Garden lore: Although property owner Grace Arents gifted the land to the city of Richmond to become a garden when she died in 1926, it didn’t open until 1984. That’s because she granted her companion Mary Garland Smith life-long rights to live on the property. Smith passed away at age 100 in 1968, and then it took more than a decade to develop the gardens. 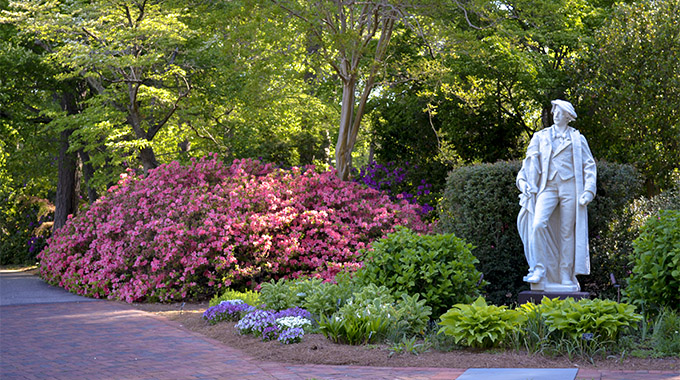 In the height of the Great Depression, Norfolk leaders proposed a way to create jobs and transform city swampland into something beautiful. The Works Progress Administration project they devised not only offered employment to a segregated workforce of 220 Black women and men, but it also created an oasis that later grew into the state’s largest garden.

Visitors can tour the property by boat, tram, or bicycle. They can also wander 15 miles of paths, explore a tropical pavilion, or play in a 3-acre children’s garden. Every Sunday, the botanical garden welcomes leashed dogs. It also offers year-round programming for humans, including yoga classes, guided meditation, and mindfulness walks.

Must see: Even if you’ve come for the plants, don’t overlook the art. The Statuary Vista area features 11 Carrara marble statues depicting notable artists like da Vinci, Michelangelo, Raphael, Rembrandt, and Rubens. The 7-foot-tall pieces were carved in Rome by Virginia artist Moses Ezekiel in the late 19th century and were originally to be displayed on the exterior of Washington’s Corcoran Gallery of Art.