In April 1865, President Abraham Lincoln and his 12-year-old son Tad traveled by boat from City Point, Virginia, to Richmond, Virginia, and stepped ashore to tour the newly liberated Confederate city.

Too bad they didn’t bring a bike.

The historic marker indicating the spot where the pair first entered town now overlooks the start of a 51.7-mile paved path. And although Lincoln would have struggled to fit his stovepipe hat under a bike helmet, he certainly would have enjoyed the ride.

Many cyclists travel just a few miles, but my fiancée, Sara, and I wanted to do it all, taking a leisurely two days to pedal the entire route. That left time for browsing trailside shops, sipping samples at a vineyard and brewery, and reading the scores of historic markers that line the path like dandelions.

Read more: While you’re exploring Virginia, why not visit the homes of these Virginia-born presidents? 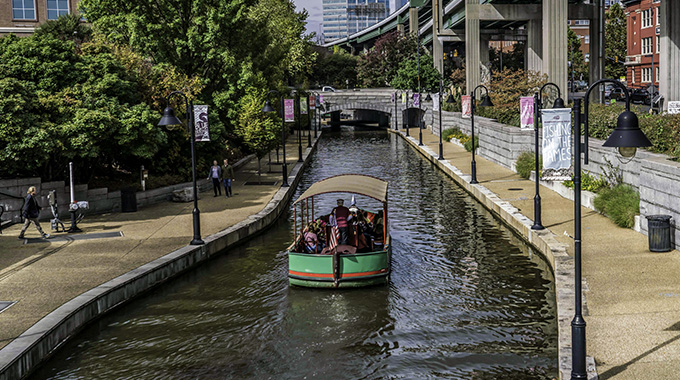 If you want to start the trail in an urban area, begin at the Richmond City Canal. | Photo courtesy The Virginia Capital Trail Foundation

We start our trip on a sunny Saturday morning alongside the Richmond City Canal, where the trail begins as an urban path, passing converted warehouses, parks, and condos. As it leaves town, we climb one of the few sizeable hills on the entire route, and then roll into the countryside. 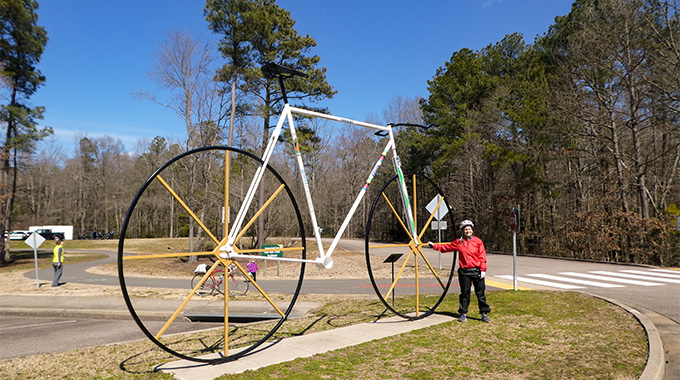 The writer's fiancée, Sara, stands by this 12-foot bike sculpture along the trail. | Photo by Larry Bleiberg

Several miles later, a delicious scent wafts across the path near mile marker 45. It’s coming from The Original Ronnie’s BBQ, where I find owner Ronnie Logan Sr. in the parking lot tending an outdoor wood smoker packed with ribs, brisket, and chicken wings. He offers a tempting peek at the slow-cooking racks of meat, but it’s too early for lunch. Instead, we follow the path over Interstate 295, through Four Mile Creek Park and by a 12-foot sculpture of a bike. A marker tells me the piece was created from salvaged steel. 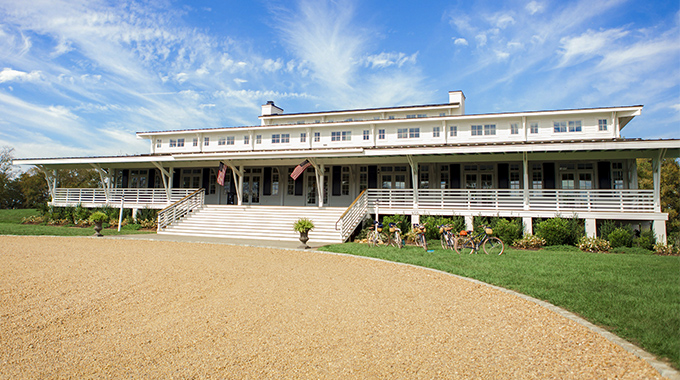 About an hour later, a detour at mile marker 30 takes us down a gravel road toward Upper Shirley Vineyards, where we encounter members of the Princess Anne Hunt club on horseback and dressed in full field regalia: bowler hats, breeches, and traditional wool jackets. They’ve just wrapped up a fox hunt and appear to have arrived from another century. One of them gives my bike a skeptical look. “Sir,” she says, “you need to get a horse.”

We’ve come to meet Anne Poarch, whose company, Basket and Bike, leads trail tours and rents Pedego electric bicycles in collaboration with RVA on Wheels, as well as conventional bikes. Her most popular offering, a 14-mile round-trip from the vineyard, can be customized to include a picnic or wine tastings (wine tastings are currently on hold due to COVID-19). 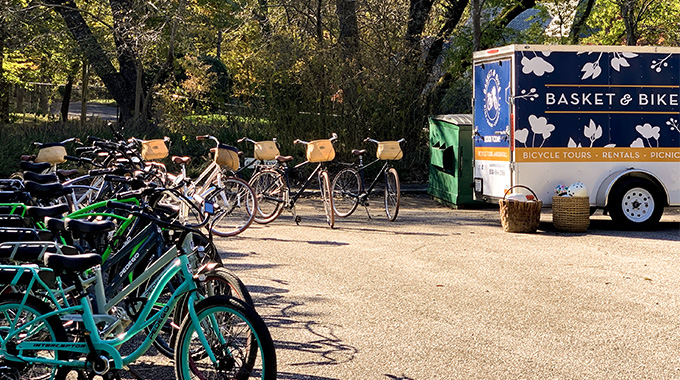 Leading us back to the trail, she explains how the path links key moments in U.S. history, starting with the nation’s first legislative assembly in Jamestown, crossing through lands ruled by the great Native American chief Powhatan, and passing through Revolutionary and Civil War battlefields, where earthworks built by soldiers are still visible in the woods

“This is really the road of democracy in our country,” Poarch says. It’s also the place where America celebrated its first Thanksgiving at Berkeley Plantation in 1619, she tells us, and the homeland of Pocahontas, the famous Powhatan who married an Englishman and traveled to Britain to meet Queen Anne.

Poarch also describes the biodiversity of the James River, which parallels the trail. The waterway once flourished with Atlantic sturgeon, a mammoth fish weighing more than 800 pounds that traces its lineage to the dinosaur age. Native American legends say that Powhatan boys would ride on its back. Although severely threatened by fishing activity and pollution, the fish population is slowly rebounding.

Poarch takes us as far as mile marker 25, where we visit the Westover Episcopal Church, which traces its roots to 1613. She has a door key and shows us the simple yet elegant interior, where five presidents have worshipped, along with farmers, gentry, and enslaved people. Outside, a parish cemetery overlooks a wide tidal creek leading to the James. As the afternoon sun sinks, the gravestones send long shadows toward the water.

It’s just a few miles farther to Charles City County Courthouse near mile marker 20, where we had left a car the previous night to shuttle us back to our Richmond hotel. By this time, whether it’s from stopping to read markers or from my slower pace, Sara is well ahead of me. Coasting into the settlement, I find her waiting at a sculpture spelling out the letters L-O-V-E.

After 30 miles of cycling, it’s a sweet way to end the day.

Read more: Want to explore Virginia’s LOVEworks signs for yourself? Check out our road trip itinerary. 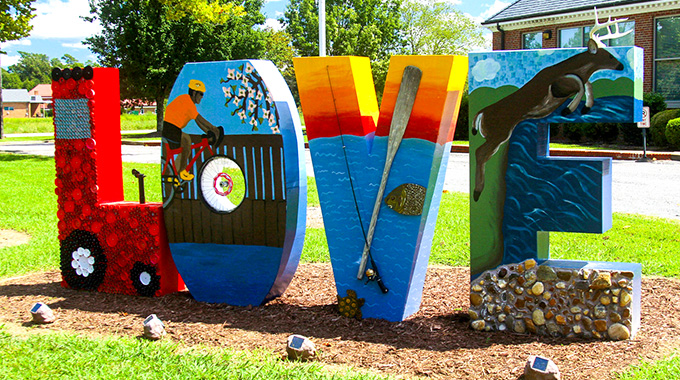 There are more than 250 LOVEworks sculptures all around Virginia. | Photo courtesy The Virginia Capital Trail Foundation

The next morning, we set up another bike shuttle, parking a car at Jamestown Settlement and heading back to the courthouse to resume our ride.

The path passes a boarded-up Rosenwald school just past mile marker 19. It was one of thousands built by Black communities across the South in the early 1900s with aid from a partner of the Sears, Roebuck, and Company department store.

At mile marker 7 comes the route’s second big hill, a climb up the towering Chickahominy River bridge. It’s worth the effort. The bridge-top viewing area offers a sweeping vista of the waterway.

It’s only a few more miles to Spoke and Art Provisions, a coffee and gift shop marked by a colorful community art project: a transparent shelter surrounded by hand-decorated wine bottles that gleam in the sun. The shop has everything a cyclist would want, including more than a dozen flavors of energy gel, sandwiches, and racks of souvenirs. Sara buys a few gifts, and we hop back on our bikes for the last 3 miles.

Many riders finish the trail at Billsburg Brewery across the street from Jamestown Settlement. But, with mile marker 0 in sight, I’m suddenly distracted. Seven historic markers beckon from the trailside. One’s devoted to civil engineer Samuel H. Yonge, who designed a seawall in the early 1900s to save Jamestown Island from eroding away; another offers more information on Pocahontas, revealing that her nickname translates as “playful one.”

It’s all too much to resist. I wave to Sara and hit the brakes. Our celebratory drink will have to wait a little longer.

Writer Larry Bleiberg is president of the Society of American Travel Writers. After finishing the Capital Trail in Jamestown, he was ready to keep pedaling all the way back to his home in Charlottesville, Virginia. 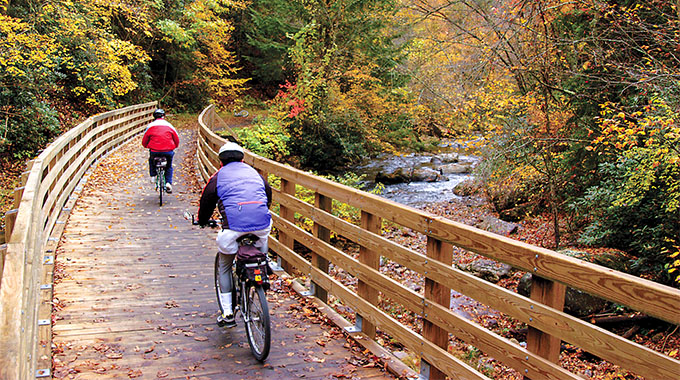 The Virginia Creeper National Recreation Trail is in the Rails-to-Trails Conservancy’s Rail-Trail Hall of Fame. | Photo by U.S. Forest Service

Other Virginia bike trails to explore

The highlight of this 31-mile rail-trail path is the aptly named High Bridge, which spans nearly a half-mile over the Appomattox River at heights of up to 125 feet. Many visitors base their trip in Farmville, where bike rentals are available.

High Bridge itself was constructed in 1853 and is now on the National Register of Historic Places.

The easiest way to cycle this scenic mountain rail-trail is to rent a bike and take a shuttle from Damascus or Abingdon to Whitetop Station near the Virginia-North Carolina boundary. Then hop aboard for an easy 34-mile mostly downhill ride back to Abingdon or Damascus.

The popular path, which was named to the Rails-to-Trails Conservancy’s Rail-Trail Hall of Fame, crosses dozens of wooden rail trestles, through forests and over wild trout streams.

Stretching across Northern Virginia, this paved 45-mile trail reaches from Shirlington all the way to Purcellville in the shadow of the Blue Ridge Mountains. Like the Virginia Creeper National Recreation Trail, it also boasts a spot in Rails-to-Trails Conservancy’s Rail-Trail Hall of Fame.