Ashland, Virginia, is one of the nation’s best train-watching spots

If you love trains, Ashland, Virginia, is one of the best places to spot them. About 50 daily trains route through this charming historic town that offers a front-row seat to some of the best train watching on the East Coast. And each year in April, about 10,000 people visit for Ashland Train Day. Then again, every day is train day in Ashland.

For Shelagh and John Corporon, the timing was perfect. As the couple drove up Interstate 95 back toward their home in Connecticut, they realized they’d reach Ashland just before Amtrak’s 94 Northeast Regional passed through town.

For more than a year, the couple had watched the Ashland livestream on Virtual Railfan’s popular YouTube channel, which shows trains rumble through the town. Now they could experience the sensation in real life, listening for the approaching clack of train wheels as they stood by the depot clock that had long graced their home computer screens.

“I insisted that we stop,” says Shelagh. “I knew it would be fun—something really nerdy to add to our repertoire.”

Tiny Tim’s Trains and Toys shop is filled with collectibles sure to delight patrons of all ages. | Photo by Larry Bleiberg

The couple made the most of their visit. Before the train arrived, Shelagh stopped in Ashland’s Tiny Tim’s Trains & Toys to buy gifts. Then they texted their daughters to tell them to watch for them online. Finally, as the Amtrak pulled into town, John took out his phone to video the passing cars.

The thrill of trainspotting

The Corporons are in good company.

Every day, visitors, commonly known as railfans, come to this town 16 miles north of Richland, not to catch a train, but to admire one. Part of the appeal is sheer volume. Up to 50 trains roll through town daily on one of the continent’s main rail arteries. Traffic on the double-tracked line includes dozens of freight trains and Amtrak runs, most stopping briefly for passengers.

Thanks to 3 cameras maintained by virtualrailfan.com (Motto: We bring the trains to you!), at any moment, hundreds of people may be watching online. Signs at the station even warn that conversations might be picked up by webcam microphones.

But watching rail traffic on a screen is nothing like standing on the platform as a 2-mile-long­­ freight train rolls through town.

In person, train watching is a full-body experience, starting with the distant cry of a horn, followed shortly by the ringing bells of lowering guard gates, all leading to the rush of wind as the cars roar by the platform. 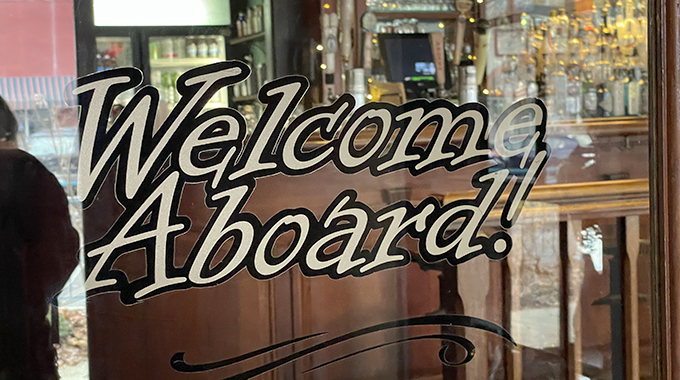 Tom Wulf, who serves on the board of the Ashland Museum and is coordinating an effort to build a town rail park, says there’s nothing like it in the region. In bigger cities, access to trains is limited to passengers waiting at stations. In smaller places, rails are typically hard to reach. Ashland’s different. “The railroad’s not sitting on the edge of town in some industrial area,” he says. “There’s no wrong side of the tracks here.”

Indeed, Ashland has attracted railfans long before anyone had dreamed of a web browser. The town owes its existence to the Richmond, Fredericksburg and Potomac Railroad Company, which laid tracks to the area in 1836. About a decade later, the company began to develop Ashland as a resort community for Richmonders. Except for a break between 1967 and 1985, passenger service has continued ever since. 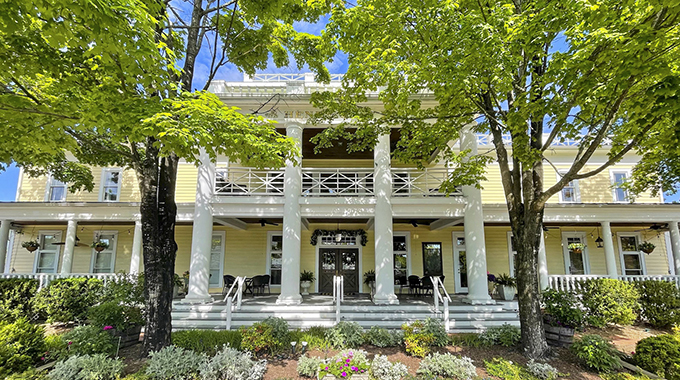 The porch and balcony at the Henry Clay Inn provide guests a trackside view. | Photo by BigTree

Today, visitors can grab a meal overlooking the tracks at places like the Iron Horse Restaurant and check into the 13-room Henry Clay Inn, where guests sit on the front porch and watch the rails.

Chris Lynch, a railfan from East Hartford, Connecticut, knows the hotel well, having stayed more than a dozen times. The first thing he’ll do when he wakes up is check on Amtrak’s northbound Auto Train. “If he’s on time, he’ll be through before dawn, but if he’s late we’ll try to catch him in the morning,” Lynch says.

After a day of touring around town or taking train pictures with his son, Lynch will end the day with Amtrak’s Silver Meteor on its run from New York to Miami. “It goes through Ashland around 9:30 at night,” he says. “If it’s nice outside, we’ll try to watch that.”

Others visit the town for Tiny Tim’s, a store with a dizzying inventory of model railroad engines, cars, and track scenery—essentially miniature versions of whatever rolls by its front window. The store stocks 20,000 separate items, including 6 different gauges of train stock, from tiny Z-gauge to the shoebox-size G-gauge. Some of the engines, equipped with Bluetooth and digitally recorded sound, can run as high as $2,000.

Store owner Suzanne Hemingway began working to bring webcams to Ashland in 2016. In the years since, the town’s train reputation has blossomed. Of Virtual Railfan’s 50 locations, Ashland consistently ranks in the top 5.

Train watching in town may soon grow even more popular. In 2022, Ashland plans to open the first phase of the new Mid-Atlantic Railroad Park. Funded by nearly $200,000 in public and private donations, the park will stretch for several blocks along the tracks, using kiosks and displays to tell the town’s rail history. Planners hope that information about the park will be ready by the town’s Ashland Train Day festival, scheduled this year for April 30. 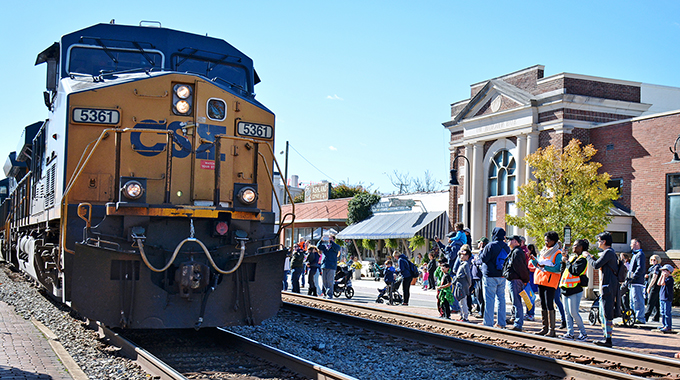 Separate sections will touch on important inventions like the railcar coupler and the air brake, along with areas highlighting the economic importance of the rail line, a vital link in the East Coast’s economy. One kiosk will recognize the town’s Black workers who built and maintained the tracks—and note that the Dutch Colonial–style railroad depot was originally built with separate white and “Colored” waiting rooms.

Other signs will celebrate the restored 1926 red caboose at the Ashland Museum and the downtown painting stretching along hundreds of feet of brick wall that town promoters say is America’s longest train mural.

But the biggest exhibit will always be the tracks themselves.

For railfans, freight trains have a particular appeal, a Lionel set come to life. Some trains come from as far away as Miami or Upstate New York and offer a grab bag of boxcars and tankers. Visitors watch for surprises, like military vehicles, oversize electrical transformers, or private passenger cars. Sometimes there’s colorful graffiti, or even a rare caboose. And twice a day, there’s a chance to see the Auto Train, which runs only between Lorton, Virginia, and Sanford, Florida.

“It’s like fishing,” says town councilwoman Kathy Abbott, trying to explain the appeal. One perpetual favorite is a “stink and drink”—trains that carry containers of compacted New York City garbage to landfills in the South, along with Tropicana boxcars used to carry orange juice.

When Abbott first learned about the webcams, she found herself going online to answer questions about Ashland. Eventually, she was hired by virtualrailfan.com as operations manager, working with the website’s many feeds across the country.

Although she claims not to be a railfan, Abbott can appreciate the incredible engineering required to design a 7,000-horsepower freight locomotive that pulls thousands of tons of cargo across the country.

She has even begun to understand why people can spend hours viewing them. “They are big things that move,” Abbott says. “It’s just kind of powerful to watch.”

Charlottesville-based freelance writer Larry Bleiberg feels the call to hop aboard every time he hears a train in the distance.

Know before you go

Ashland Visitors Center, 112 N. Railroad Ave., places you at the center of the town’s train world. Inside, you’ll find historic items and local travel information. Although the center is not an official Amtrak station, the staff can tell you when the next passenger train will be through town..

Ashland Museum, 105 Hanover Ave., explains how and why this small town became a railroad hub. Kids will love playing on the restored caboose outside. Open Friday-Sunday.

The Caboose Market & Cafe, 108 S. Railroad Ave., has a wine and gourmet shop in the front and a farm-to-table restaurant in the back, with salads, sandwiches, and Virginia wines by the glass. Closed Sundays.

The Henry Clay Inn, 114 N. Railroad Ave., a 13-room boutique hotel, has a comfortable porch and balcony with trackside views. Rates from $145 a night, 2-night minimum.

The Tinder Guest House, 106 S. Railroad Ave., boasts a second-story suite with views of passing trains. Rates from $95 a night, plus a $35 cleaning fee.