Each spring, Texans sharpen their gardening shears and sow the soil for warm-season vegetables. And in Tyler, where azaleas have reigned supreme for more than half a century, gardeners busily fine-tune the blooms along the city’s picturesque 10-mile Azalea and Spring Flower Trail.

The route takes visitors strolling or driving past hundreds of azalea bushes in Tyler’s Azalea National Historic District. More than 100,000 people typically flock to Tyler in late March and early April to admire the flowers’ bursts of colors—along with tulips, wisteria, and dogwood—planted in residential gardens outside stately historic homes. This year, the trail celebrates its 62nd anniversary from March 19 to April 4. (Other East Texas flower trails include the Nacogdoches Azalea Trail and Palestine’s Dogwood Trails.)

Local gardeners say the city’s sandy soil and mild weather make it an ideal spot to grow azaleas—and roses, too. “People here feel a pride about the azaleas,” says Tyler homeowner and gardener Mike Carmichael, who, along with his wife, Patrice, has lived in various homes in the Azalea district for the past 22 years.

Last year, the couple built a 1930s-style home in the district, which includes about 800 properties. Mike planted azaleas and adorned the dry creek that passes through the yard with stones. “I’m a Master Gardener,” he says. “I like to be hands-on.”

The couple is far from alone. For 25 years, Don Warren and his wife, Chelli, have welcomed visitors from around the world and fielded questions about their garden, which includes miniature magnolias, several dozen red and white azaleas, and 1,000 tulips. “We spend a lot of time really working to make our yard look pretty,” Don says. Visitors seem to agree: Many lie on the couple’s green rye grass just to snap a photo at the perfect angle.

Azaleas first came to Tyler in 1929 when nurseryman Maurice Shamburger planted several bushes in his garden. Pleased with results, he shipped boxes of the vibrant plants from Georgia to Tyler; azaleas are native to the Peach State.

Shamburger persuaded Sara Butler of the Tyler Courier-Times-Telegraph to plant bushes outside her home on Charnwood Street. Soon, neighbors followed suit, and Tylerites began buying up hundreds of the blooming plants.

“It started at some of the bigger to-do houses,” says Holli Fourniquet of Visit Tyler, the city’s tourism arm. “Then, it became something where everybody wanted to keep up with the Joneses.”

The city made it official in 1960, when the Chamber of Commerce set up a marked route featuring 60 homes on a 5-mile trail. Now, the event consists of two trails—the Lindsey Trail and the Dobbs Trail—that wind through town. Pick up a map from the Tyler Visitors Center (110 N. College Avenue), then proceed south, ending in Bergfield Park. Many of the lushest gardens are within walking distance of one another in the Azalea National Historic District. Other districts with impressive displays include the Brick Street District and Charnwood District.

Check out the following five must-see spots along the trail. 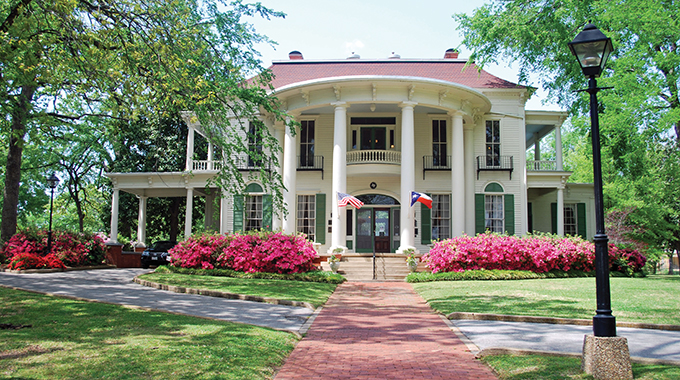 This grand Greek Revival–style home has a storied history. The property had belonged to a bachelor attorney who sold it along with a one-story log cabin to Franklin N. Gary, an educator, when the attorney left to fight in the Civil War. Gary sold the property to retired physician Samuel A. Goodman in 1866. Now a museum, the home’s well-manicured lawn is covered during springtime with deep-pink azaleas and roses. The park spreads across almost an entire city block, and there are plenty of benches around the gardens. As part of efforts to enhance the gardens this past year, museum supervisor Debbie Isham planted heirloom irises and nearly 250 daffodil bulbs. Inside, visitors see some of the original cabin walls and artifacts such as antique hand-carved furniture and musical instruments and medical books dating to the early 1800s. On March 27, the Texas Chapter of the Azalea Society of America plans to sell azalea bushes at the museum. 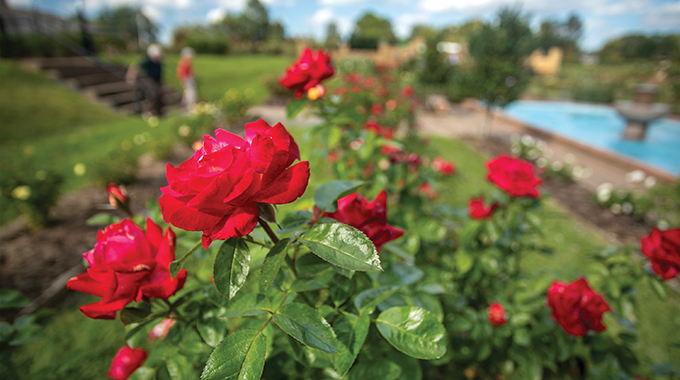 At 14 acres, the Tyler Rose Garden is the largest municipal rose garden in the country. It’s home to more than 500 varieties of roses and 38,000 rose bushes in addition to its 160 azalea bushes. In 1937, Tyler received a WPA grant to build the garden. Work stalled during World War II, and the garden finally opened to the public in 1952. Today, one wall of the original entrance remains. Visitors can picnic on the Queen’s Court Lawn, a large open space in front of the property’s largest fountain, or rest and reflect in the Meditation Garden, which features a gazebo and three ponds with Japanese koi. Its Shade Garden includes 25 varieties of Japanese maple. 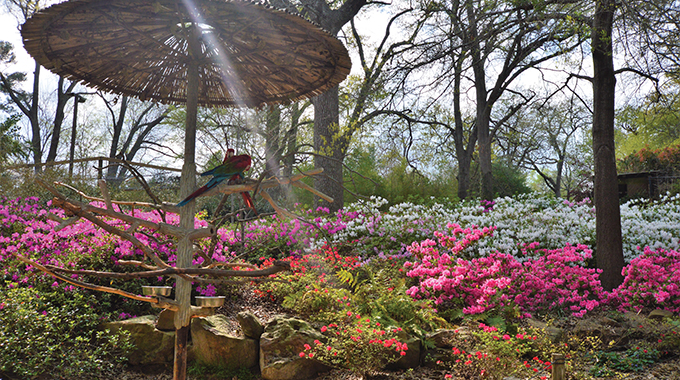 The Caldwell Zoo has an impressive display of pink, white, and purple azalea bushes that begins at the entrance and extends to a hill by the expansive African overlook. Along the way, visitors can spot golden lion tamarins, macaws, a giant anteater, and cheetahs. Families with kids, especially, will enjoy feeding giraffes, exploring the new anaconda habitat in the reptile house, and grabbing a sweet treat at the zoo café. 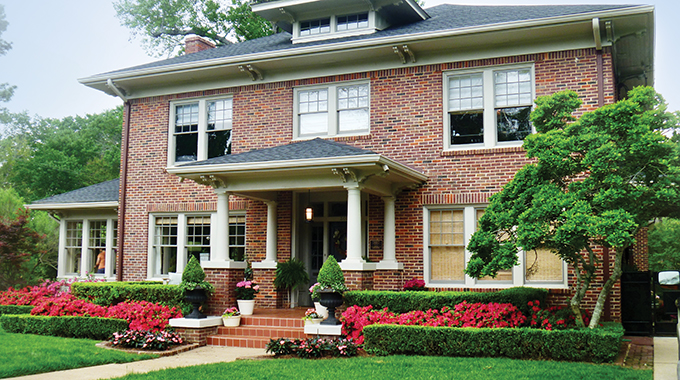 This tour, run by the nonprofit Historic Tyler, offers visitors rare glimpses into the interiors of several of the city’s most impressive historic homes. Docents are on hand to explain their rich heritage. Inside capacity may be limited due to COVID-19, but all visitors can enjoy the homes’ exteriors and lush gardens. Virtual tours may also be available. 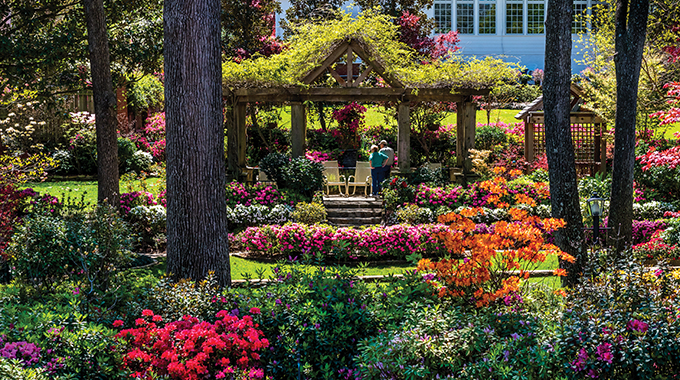 When Joan Pyron moved into her Azalea district home in the 1990s, the backyard was full of weeds, trash, and trees. She and her husband, Guy, who passed away in 2020, got to work transforming it into a garden lover’s paradise, complete with a pergola and a greenhouse. “Some of my friends think it’s a lot of work, but for me, gardening is medicine,” says Joan. Over the years, the Pyrons took trips to garden centers across Texas, returning with trailers full of flowers. Now, the garden has more than 700 azalea bushes, many of which are more than 30 years old. A sign out front during the spring trail event announces, "You Are Welcome to Walk Through Our Backyard." The garden also features a spring-fed creek with a small stone bridge built by the WPA. Joan greets visitors along with her cocker spaniel, Chase, who often wears a top hat and carries a basket of flowers for the occasion.