Sweat trickled into my eyes as I looked out at the Rio Grande. It was late summer in Big Bend Ranch State Park, and though the sun had just gone down, the temperature had not. Clouds that had been building in the northwest appeared to be heading my way. I’d traveled to this remote region of Texas, home to some of the darkest skies in the nation, to photograph the night. But my trip coincided with monsoon season, and I’d spent much of my time so far waiting out storms and watching as thick clouds obscured the stars.

Yet this evening, as darkness fell and bats whizzed around me, Venus and Jupiter shone bright. I planted my tripod in the dirt, peered at the screen of my Nikon D850, and composed a shot—a stretch of purple river, steep cliffs and mountain peaks, and a smoldering sky above. Surrounded by desert scrub—creosote and prickly pear, ocotillo and thorny acacia—I gazed up as more stars emerged and a cloudy swath took shape in the southwestern sky. This, I thought, was why I’d taken my chances during the monsoon and heat. The swath of light I was seeing wasn’t a cloud. It was the glimmering core of the Milky Way.

The sight filled me with reverence. Could any photograph really capture the awe-inspiring scene before me? I didn’t know but was determined to try.

Landscape astrophotography takes total commitment. You travel long distances to find the darkest skies, yet you’re always at the mercy of the weather. You’re often working around prickly cacti, slippery ice, or twisting roots, which can be perilous in darkness. Simple tasks during daytime—like focusing a lens or identifying objects in the middle ground of a shot—become aggravatingly difficult in the dark, especially when you’re sleep-deprived. Depending on the kind of image you’re after, you might spend hours in isolation, taking hundreds of photographs to create one great image. Of course, I knew this going in. 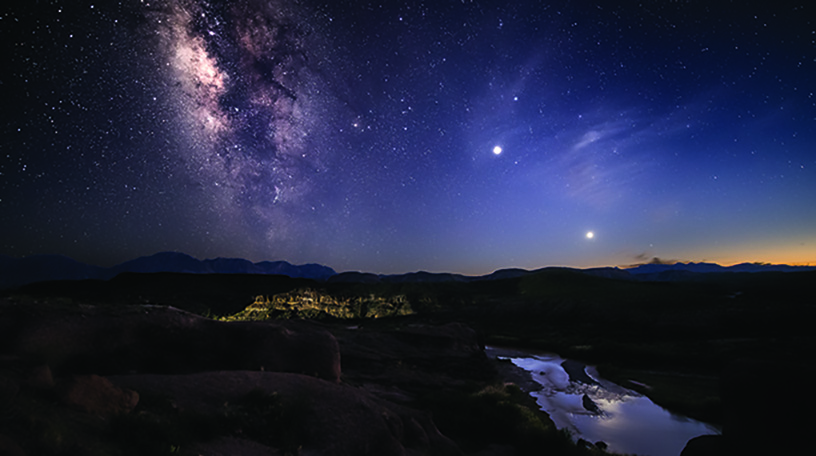 A two-shot composite overlooking the Rio Grande River in Big Bend Ranch State Park. To capture detail in the sky and the foreground, two different exposures were taken and then blended. | Photo by Sivani Babu

A few days earlier, I’d pulled into the Upper Madera Canyon Campground in Big Bend Ranch and pitched my tent between a patch of green ocotillo and a few cacti. The park was largely deserted. The heat, the rain, and the end of summer had sent everyone home, save for park rangers, law enforcement, and a handful of locals passing through on FM 170. I’d welcomed the lonely scene. Loneliness meant darkness, and finding darkness was getting harder.

Growing up on California’s Central Coast in the 1980s and ’90s, I’d often stargazed with my parents. As we stood in our driveway or lay on blankets in the backyard, my dad, an astronomy enthusiast, would point out the core of the Milky Way and explain our position within its spiraling arms. I’d look out at constellations and dream of becoming an astronaut. Adulthood felt as far away as Orion’s Belt, and the possibilities seemed as endless as the night sky.

As I got older and moved around the U.S., I took up astronomy and photography and often drove hundreds of miles to escape city lights. I traveled to some of the darkest places on Earth: the Atacama Desert, the Serengeti plains, Patagonia, New Zealand, and, closer to home, Death Valley and Big Bend. Then one night several years ago, I stood in my parents’ driveway, looked up at the sky, and realized the Milky Way was all but invisible. The town had grown. New neighborhoods had popped up, and the soft-yellow street lamps that I’d grown up with had been replaced by garish-blue bulbs. The once-dark sky was now lost to the light.

Losing in a light-filled world

It’s happening almost everywhere. Across the United States and around the world, dark skies are disappearing at an alarming rate. According to the “2016 New World Atlas of Artificial Night Sky Brightness,” published in Science Advances, more than 99 percent of people living in the U.S. and Europe “live under light-polluted skies.” Nearly 80 percent of North Americans can’t see the Milky Way.

A number of spots in the U.S.—mostly in the Southwest—still have dark night skies. Some, including four Texas state parks, have been certified as Dark Sky Places by the Tucson, Arizona–based International Dark-Sky Association (IDA), a nonprofit that began its UNESCO-style certification program in 2001. Many Texans are working to stop the spread of light pollution and ensure that the state’s dark-sky areas endure in places from the Gulf to the Panhandle. In a part of West Texas that includes the Big Bend region and a significant portion of the Permian Basin, scientists and educators are a driving force in the effort.

The man who wants to save the darkness

That’s why I left the town of Alpine early one morning and watched the Chihuahuan Desert fall away as I drove into the Davis Mountains to the University of Texas’ McDonald Observatory. I had an appointment to meet the Angel of Darkness. An affable and soft-spoken man, Bill Wren heads the observatory’s Dark Skies Initiative. His mission is simple: to save the darkness.

In much of the U.S., dark skies are disappearing due to the growth of cities. But out here around the observatory, darkness is threatened by a different source.

“For 70 years, the brightest thing [on thehorizon] was El Paso-Juarez, 165 miles away from us,” Wren told me as we sat in his office on the ground floor of the observatory’s dome. But nearly a decade ago, that began to change. “We started noticing the northeastern horizon lighting up from the Permian Basin,” he said. The primary culprit? Oil- and gas-related activities, including drilling rigs. The Permian Basin was booming. “But it’s not just oil and gas rigs,” Wren said. “It’s all the commerce that comes with that—hotels, storage facilities, big-box stores.”

Fortunately, out here the glow emanating from those areas is low on the horizon. The sky over the observatory is still dark, and research hasn’t been affected. The goal is to keep it that way, and Wren is on a quest to educate others. At oil and gas conferences, he shows photos of bad lighting and increased glare to anyone who’ll pay attention. He also makes the case for reduced lighting in economic terms: All those bright lights are an enormous waste of money (roughly $3.3 billion nationwide per year); and brighter lights often don’t make areas safer. 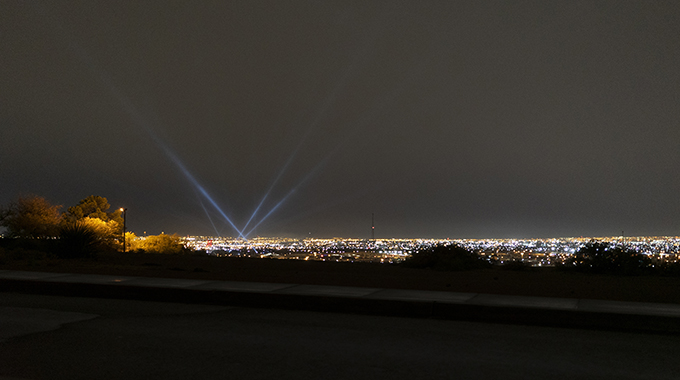 In 2013, San Antonio–based Pioneer Energy Services approached Wren to change the lighting on a single rig to demonstrate the benefits of careful lighting. The project was so successful that Apache Corp., which owned the closest oil field to the observatory, made similar changes. Working with both companies, Wren assembled guidelines that have now been endorsed by industry associations. Yet change comes slowly. “Only a few hundred or thousand [companies] left to go,” Wren joked.

“There’s no malice” on the part of the oil and gas companies, he said. “They want to be good neighbors. The struggle is educating these companies, finding the right people at the company to explain what dark-sky–friendly lighting means, so they can recognize good lighting on sight. It’s very visual, and once you see it, you can’t un-see it.”

Of course, the effects of light pollution go beyond limiting astronomical pursuits. Wren and other dark-sky advocates point out that artificial light disrupts our circadian rhythms and can alter wildlife navigation, animal migratory paths, and predator-prey relationships. As Cindy Luongo Cassidy, the past director of the Texas chapter of the International Dark-Sky Association, told me: “Almost all living things on this planet need natural darkness.” By and large, science supports her assertion.

What we are losing with dark skies

As my time at the observatory wound down, I asked Wren the question I’d been considering for nearly half my life: What are we losing when we can’t see the night sky?

He turned to his computer and pulled up a photograph of The Starry Night, Vincent van Gogh’s famous painting of the sky over Saint-Rémy, France. Van Gogh was inspired to paint the fantastical scene by the view from his asylum window—he’d expressed appreciation for the stars and colors of the night in letters he’d written to friends.

“I couldn’t sleep one night,” Wren said as we looked at the painting, “and I got to thinking: If van Gogh were alive today, would he be inspired to paint that?” Wren then pulled up a satellite image of Saint-Rémy at night. Needless to say, the place has changed since van Gogh gazed out at the scene in 1889. Today, a mass of glowing yellow lights are visible from space. Wren and I glanced at each other. “I’m not sure he would,” Wren said.

He added, “How many aspiring van Goghs today have never been exposed to that—to that stimulus?”

Back at Big Bend Ranch, I leaned down to check my most recent exposure of the night sky. The clouds that had been threatening to move in had dissipated. I was pretty certain I’d captured a few compelling images, and there were other locations to shoot. As I released my camera from the tripod, I looked around. There was no moon illuminating the sky. There were no man-made lights on of any kind—even my headlamp was off. Yet there were shadows everywhere, and the sky above glowed like a Jackson Pollock canvas painted in burning embers. I could make out the silvery Rio Grande below me, the rocks next to me, and the ocotillo and prickly pear cacti in front of me. With no moon and no lamps, I could still see.

It wasn’t the first time I’d beheld the world bathed in nothing but starlight, but it seemed no less miraculous to me. In fact, I felt the same sense of endless possibility I’d experienced as a child looking up at the night sky. I felt overwhelmed by the breadth of the universe. Humbled by the vastness of the unknown. Liberated by my own insignificance. And deeply, perpetually, unbreakably connected to the universe.

Beneath the vast sea of stars, I was reminded of the words of cosmologist Carl Sagan: “Our posturings, our imagined self-importance, the delusion that we have some privileged position in the universe, are challenged by this point of pale light. Our planet is a lonely speck in the great enveloping cosmic dark.”

I tried to imagine never seeing a night like this again. “It’s my job to raise the alarm without being an alarmist,” Wren had said back at the observatory. As I looked up at the galactic core, at a milky strip of blazing stars arcing through the sky, I wondered if maybe raising the alarm wasn’t my job, too. Maybe it should be the job of everyone who has ever stood under a dark night sky and felt humbled, or overwhelmed, or inspired. Then I thought back to The Starry Night. Perhaps we could still save the next van Gogh, or inspire the next Carl Sagan. Or perhaps, by saving dark skies, we could just give people a little more metaphorical elbow room—the chance to stand beneath a fiery sky, gaze up into the cosmos, and get lost in the enormity and wonder of it all.

Sivani Babu is an award-winning nature photographer and travel writer. She is the cofounder and creative director of digital travel magazine Hidden Compass.