Fans gather at the Austin City Limits Music Festival in Zilker Park. It is scheduled for October 7–9 and 14–16 this year. | Photo by Ryan Conine/stock.adobe.com

Are you in the mood for some toe tapping? Chances are quite good that Texas artists have been playing your tune for decades. From Buddy Holly, Waylon Jennings, and Selena to Willie Nelson, ZZ Top, Erykah Badu, The Chicks, Beyoncé, and Megan Thee Stallion, the hits just keep coming from the Lone Star State. 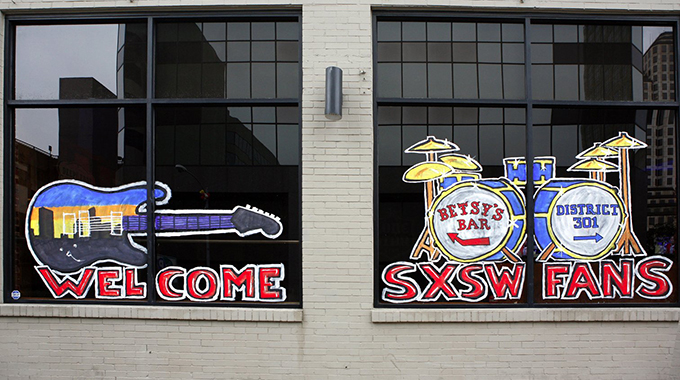 A window painting along Sixth Street during the annual SXSW festival in Austin. | Photo by Galinast/Alamy Stock Photo

Concert fans recognize March as a time for major music festivals in Texas, with SXSW in Austin (March 14–20 this year), the Outlaws and Legends Music Fest in Abilene (March 25-26), and the H-Town Blues Festival in Houston (March 26), but the state’s rich musical heritage is on display year-round.

Here are some ideas for designing a music-themed road trip across Texas filled with honky-tonks and juke joints, historical landmarks, and big, beautiful concert halls—many of them brand-new. We’ve included a list of artists hailing from each area, as well as songs to listen to along the way. 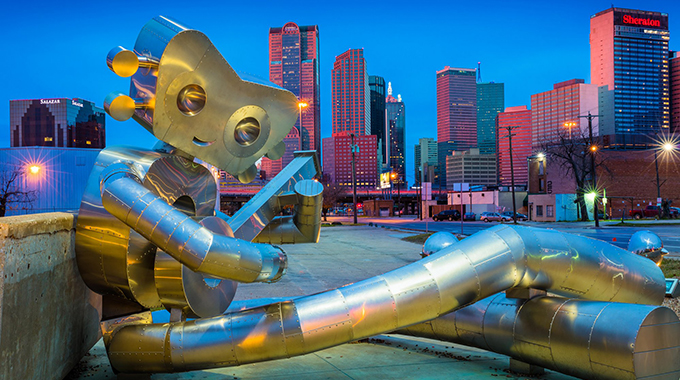 Originally settled as a freedmen’s town by formerly enslaved Black Americans after the Civil War, Dallas’ Deep Ellum neighborhood was a wellspring of music and art from the 1920s to the 1950s, hosting musicians like Huddie “Leadbelly” Ledbetter and Blind Lemon Jefferson. In years since, artists and musicians representing many genres have continued to flock to this district, where music is still performed in clubs and bars like Trees and The Bomb Factory practically every night of the week.

About 3 miles away in the Design District, you’ll find The Echo Lounge & Music Hall, the latest Dallas concert venue, a 1,000-seat facility that is a collaboration between Mark Cuban and Live Nation. 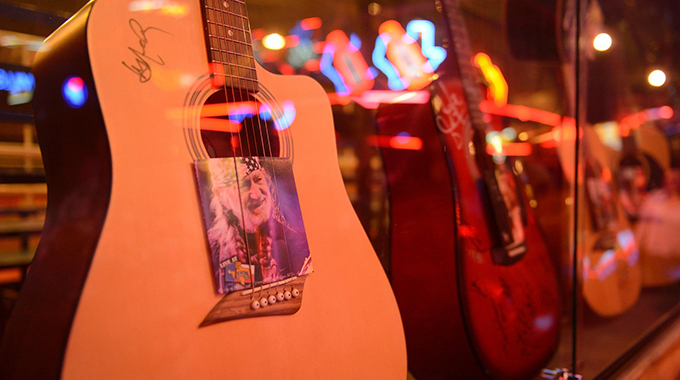 In Fort Worth, head to the Stockyards for 2 legendary watering holes that have showcased live music for decades: Billy Bob’s Texas, built in 1910 and reputedly the largest honky-tonk in the world, and Longhorn Saloon Fort Worth. The new 14,000-seat Dickies Arena was designed for rodeos but also hosts major concerts. And the new 550-seat music venue Tulips serves craft cocktails and local beer near Fort Worth’s Southside district (be sure to designate a driver if you plan to drink alcohol).

Songs about DFW: “Dallas Days and Fort Worth Nights,” Chris LeDoux; “Deep Elem [Ellum] Blues,” a traditional song popularized by the Grateful Dead; “If You’re Ever Down in Dallas,” Lee Ann Womack; “Does Fort Worth Ever Cross Your Mind,” George Strait 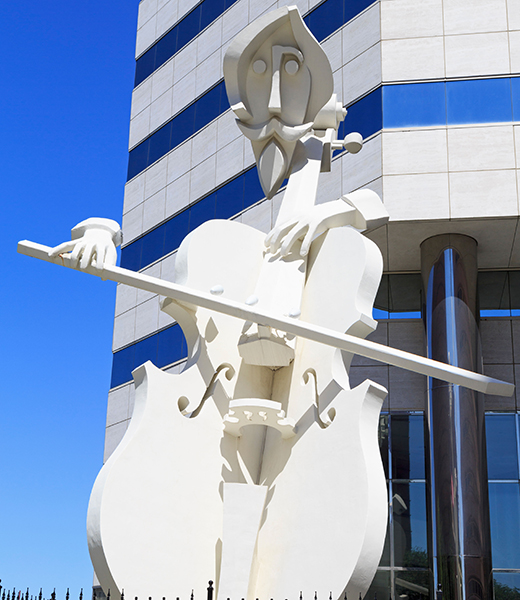 Beyoncé’s hometown continues to kick out the jams, with intimate singer-songwriter venues like  Anderson Fair and Cactus Music and heart-thumping, crowd-pumping venues such as Warehouse Live and Numbers Night Club. The latest venue to open in H-Town is 713 Music Hall, located inside POST Houston, the former Houston headquarters of the United States Postal Service.

If you’re in the mood for a little dancing, head to Neon Boots Dancehall & Saloon, a vintage dance hall built in 1955 that offers free country/western dance lessons on Thursday and Saturday nights. Don’t miss the Esquire Room inside, with its collection of memorabilia from legendary acts that graced the original stage, including Patsy Cline, George Jones, and Willie Nelson.

Songs about Houston: “Houston, Texas,” Archie Bell & the Drells; “I Been On,” Beyoncé; “If You Ever Go to Houston,” Bob Dylan; “Houston is Hot Tonight,” Iggy Pop; “Houston,” Dean Martin 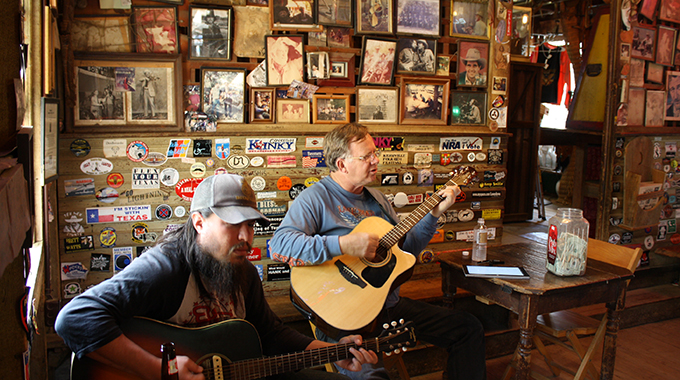 It’s a rite of passage for Texans to visit Luckenbach at least once, so if you haven’t been there, scoot your boots over to this tiny enclave outside Fredericksburg in Texas wine country. There’s a general store, a bar, and an old dance hall. 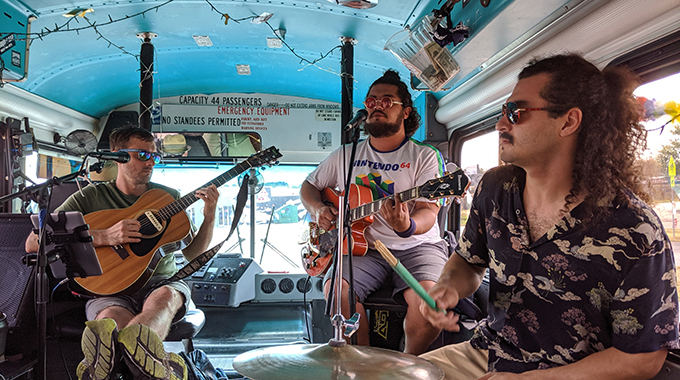 Though the Live Music Capital offers too many music venues to list, a fun bus tour cruises to 3 of them, and provides additional live music during the ride. For the hottest ticket in town—free tickets, that is—head to Austin City Limits to watch PBS’ acclaimed longest-running music series in American TV history (you’ll have to snag tickets online or through social media via lottery as artists are announced). Also in Austin, check out the newly opened Moody Amphitheater for a beautiful outdoor show in Waterloo Park. 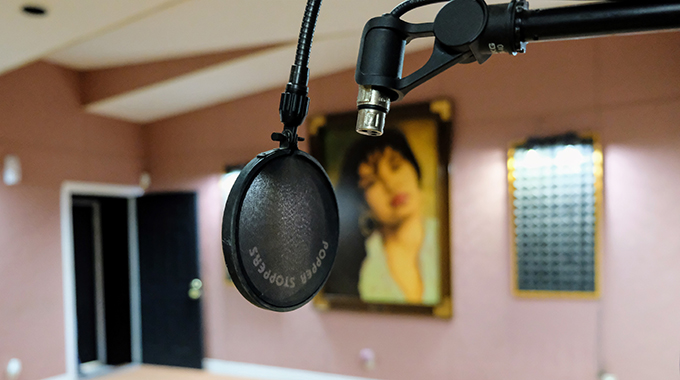 Two music legends were born on the Texas Gulf Coast: Janis Joplin in Port Arthur and Selena in Lake Jackson. Visit the Museum of the Gulf Coast’s Music Hall of Fame in Port Arthur to learn more about the many musicians who hailed from this area, including four performers at Woodstock.

In Corpus Christi, visit the South Texas Music Walk of Fame to see stars dedicated to those songsters whose legacies began here. Snap a pic in front of the statue dedicated to Selena, Mirador de la Flor, along the oceanfront, and visit the Selena Museum to see her recording studio and costumes from her storied singing career. While you’re in Corpus, check out one of the local favorite musical venues such as Concrete Street Amphitheater or Pier 99. The Galvan Ballroom first opened in 1950, growing to a space known for swing, jazz, big-band, and conjunto music. For contemporary live music, head to Brewster Street in downtown Corpus Christi.

In San Antonio, the historic 1920s-era Aztec and Majestic theaters host contemporary acts, while the Tobin Center is a major performing arts center located on the River Walk. For more intimate venues, such as Limelight, Paper Tiger, and Hi-Tones, head to St. Mary’s Street. 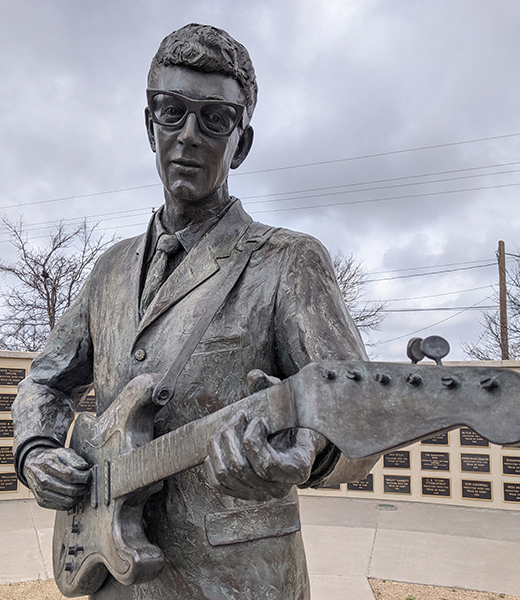 Lubbock, the town that birthed rock pioneer Buddy Holly, continues to inspire artists and has staked its claim as the city with the most live-music venues per capita in Texas, including the Cactus Theater, The Blue Light Live! and Midnight Shift. You can learn more about Buddy Holly’s brilliant but brief history at the Buddy Holly Center, and pay your respects at his grave. Swing by the new Buddy Holly Hall for a concert, ballet, or symphony performance—perhaps you’ll discover the next generation’s musical game changer.

Cynthia J. Drake is a freelance travel writer based in Austin who writes for Texas Monthly and Texas Highways.