PH Barn Door is the official headquarters of the American Paint Horse Association.

Within 10 minutes of arriving in the Fort Worth Stockyards, I spot no fewer than 10 cowboy hats on the men and women swaggering down crowded sidewalks.

But this is no Cowboy Convention—it’s just a regular Friday evening in a place everyone is quick to remind me is “cowtown.” And the joint is jumping.

Home to one of the largest livestock markets in the nation from the early 1900s to the mid-’50s, the Stockyards later fell off the radar. In the following decades, the area was mainly a destination for tourists in search of cheap souvenirs, late-night honky-tonks, and the free, twice-daily longhorn cattle drives parading down East Exchange Avenue.

But in 2020, the Stockyards began a new chapter. In the area known as Mule Alley (so-called because of its historic use as a horse and mule market), the Marriott Autograph Collection’s luxe retro-cowboy–themed Hotel Drover opened, joined by a handful of new boutiques, restaurants, and cocktail bars.

With more shops and restaurants slated to open through 2022, the full transformation has yet to be realized. However, the fresh vibe is unmistakable. Read on for some new faces, as well as old favorites, at the Fort Worth Stockyards National Historic District.

Boots on display at Lucchese Bootmaker, on Exchange Avenue.

New luxury outfitters are moving into the Stockyards along Exchange Avenue, including H Bar C Ranchwear from Detroit and El Paso–based Lucchese Bootmaker, which has a standalone boutique on Exchange and another shop housed within Hotel Drover.

A saleswoman steams a hat at the Proper Supply Company.

In Mule Alley, PH Barn Door offers gifts and collectibles as the official headquarters of the American Paint Horse Association (take a photo by the galloping-horse statues in the middle of the Mule Alley thoroughfare), and Proper Supply Co. sells boots, hats, and Western wear.

Visitors can still see many of the historic wood beams and hardware original to the old horse and mule buildings in many of the stores, including MB Mercantile and Supply, which has a decidedly old-school bent—and the pedigree to match. 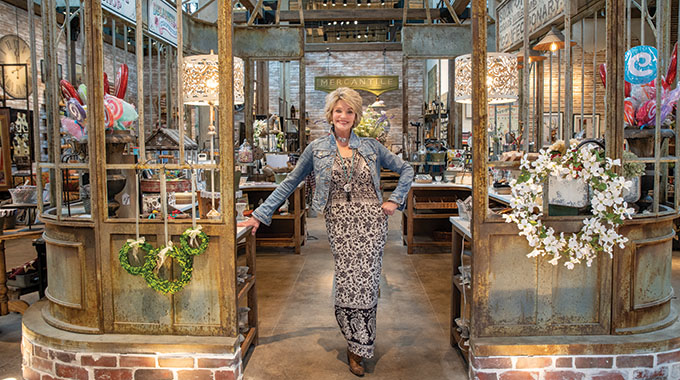 “The original vision was kind of an old-style mercantile, things that reminded us of old Western days,” says Lumpkin. “People are visiting from all over the country, and we’re allowing them to bring a piece of Texas home with them.”

Of all the developments in the historic district, the new dining options are generating the most buzz.

97 West Kitchen and Bar at the Hotel Drover. 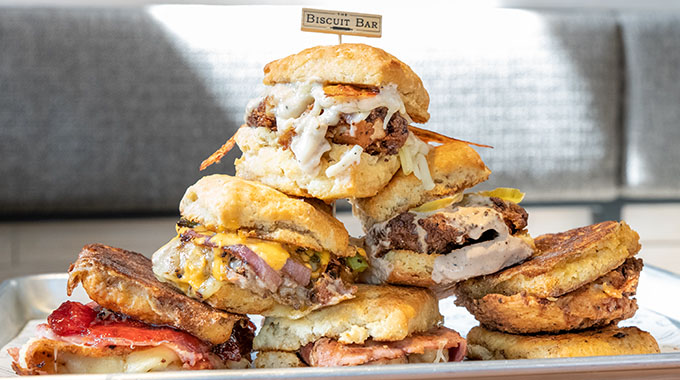 Just a few steps from Hotel Drover is Biscuit Bar, which has the tagline: Biscuits, Tots and Taps. The biscuit-based sandwiches range from the expected (bacon, egg, and cheese) to the unexpected (a Philly with seasoned rib eye and Sriracha mayo). That also goes for the “taps.” For a brunch treat, you can order “Cereal Sips,” vodka-based milky cocktails with Cocoa Pebbles floating on top.

The Mule Alley location is Biscuit Bar’s fifth restaurant since its inception in 2018. “My husband and I really came up with all the recipes ourselves,” says co-owner Janie Burkett. “I think people can taste the love and the comfort that comes in our biscuits, and, of course, there was no shortage of people needing comfort in the last year.”

Chef Tim Love, who opened his first restaurant, Lonesome Dove, in the Stockyards in 2000 and has since become a star on the Fort Worth food scene, plans to serve up two new restaurants: a Tex-Mex concept called Paloma Suerte slated for September that faces his original Lonesome Dove across Marine Creek, and an intimate “red sauce Italian restaurant” in 2022, bringing his tally of dining establishments to six within just this half-mile area of Fort Worth.

“I had this vision of what the Stockyards could become at some point,” Love says. “I’ve waited a long time, and now it’s really coming to fruition. I’ve always said that for the Stockyards to be successful, we can’t just get the cowboys and the cowgirls, we’ve gotta get the people who live other places and think other ways. You can’t come down there and eat chicken-fried steak or a steak every day. If we want to attract real tourists, we have to give quality options.”

Gathering at the saloons

Though the Stockyards remain home to some well-established watering holes, some fresh concepts are offering new, sophisticated options (be sure to designate a driver if you plan to drink alcohol).

A wine-based margarita is served in a boot at Cowtown Winery.

Cowtown Winery serves wines by the bottle or glass, along with a wine-based margarita served in a cowboy boot–shaped glass. You can also check out one of the winery’s Stockyards ghost tours every weekend.

Fort Worth native Sarah Castillo’s Sidesaddle Saloon pays homage to the American cowgirl. Castillo remembers the dirt-packed grounds and the smell of the mule and horse stalls where her new cocktail bar now stands.

“It smelled like the rodeo,” she says. “A lot of Fort Worth people know what that scent is: It’s cow manure and livestock. It wasn’t a bad thing—it’s just nostalgic.”

Her saloon serves “Texas-style tapas,” such as shaved country ham with pickled veggies, pimento cheese, and toasted sourdough bread, or caviar-topped deviled eggs, plus cocktails named for famous barrel racers and other notable cowgirls, whose spirit she believes still lives on in today’s Fort Worth women.

At the Cowtown Coliseum If you’re in town on the weekend, snag a ticket for a rodeo at the century-old Cowtown Coliseum, which takes place most Friday and Saturday nights. And families with young kids shouldn’t miss the cattle drives, which take place at 11:30 a.m. and 4 p.m. daily, same as ever, in homage to the old drovers who brought life to the Stockyards.

Speaking of cowboys, fans of old Westerns should not miss John Wayne: An American Experience, located next to Cowtown Coliseum. The new museum features more than 400 items curated by his family members and is the first permanent exhibit space from Wayne’s vast personal and professional collection.

Amy Shepherd, vice president of John Wayne Enterprises, says Wayne’s youngest son, Ethan Wayne, was impressed by the “elevated and elegant, never slick, keep-it-dusty” development he saw at the Stockyards when he was looking for a site to honor his dad’s memory.

“There’s so much synergy between John Wayne and the people of Texas that it seemed like the right fit,” says Shepherd. “His labor-of-love film was The Alamo—he spent 10 years working on that project. It was such an important story for him to tell.”

Fans shouldn’t miss the museum’s “Life on Screen” room, which dives deep into Wayne’s movie career, spanning more than 170 films, including costumes (you can see his eye patch from True Grit) and his custom Pontiac Grand Safari that he drove on his ranch.

Wayne’s Congressional Gold Medal and Presidential Medal of Freedom are both on display, along with a huge crate of more than 300,000 unopened letters sent to him in the months before his death in 1979.

Shepherd said there are plans to open the mail and display select pieces. “Visitors can take away from his story that he really lived larger than life,” she says.

Cynthia J. Drake is an Austin-based travel writer who has lived in Texas long enough to have separate “dress” and “casual” cowboy boots.