The Best Things to Do in Deep Ellum

“Traveling Man,” one of a series of three statues by Dallas sculptor Brad Oldham, dominates the skyline.

In Dallas, a vintage neighborhood gets its groove on.

No place in Dallas can claim as many ups and downs as Deep Ellum has endured. The compact downtown district developed in the 1870s as a home to Dallas outsiders, particularly African Americans and immigrants. It was named Deep Elm—after one of its main roads, Elm Street—though the slow, drawled Ell-um, as pronounced by the early residents, became commonplace and stuck.

The economy was strong in those early years, with a major cotton-processing plant and a Ford automotive plant based here. In the 1920s, Deep Ellum was a hotbed of blues music, but the area fell into neglect over the next several decades. It briefly revived in the 1980s and ’90s, when punk and grunge groups took over the old blues venues. Then the neighborhood was largely abandoned again. Until recently.

Forward-thinking, community-minded developers have given new life much of the vintage quarter’s 180 acres, which are filled with the city’s largest collection of buildings more than a century old. A palpable energy emanates from new businesses occupying thoughtfully renovated storefronts, and a few of Deep Ellum’s hardy survivors are finding new patrons. Another Deep Ellum revival has arrived.

No need to worry that the neighborhood is going mainstream, though. Innately hip Deep Ellum will never lose its edge. 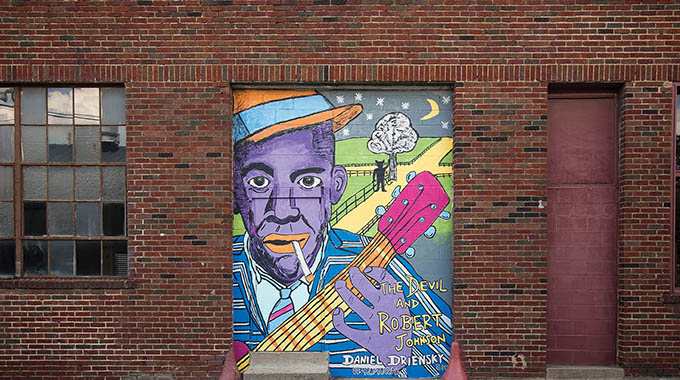 One popular eye-catcher is Cosmic Journey, a vivid desertscape and city skyline mash-up by Lesli Marshall on the back of Pecan Lodge’s building.

Across the street, find Daniel Driensky’s The Devil and Robert Johnson, (pictured above) depicting the famous guitarist whose landmark record was made nearby.

Another head-turner, Traveling Man: Walking Tall (pictured at top), is a 35,000-pound steel robot that stands almost 40 feet high near the DART light rail’s Deep Ellum station. Crafted by Dallas sculptor Brad Oldham, the smiling bot is one of three in a series: The first installment is The Awakening, showing the tin man coming up from underground; and the second is Waiting on the Train, in which the robot strums a guitar while trains and cars pass back and forth. Collectively, the “traveling men” welcome us to revel in Deep Ellum’s revival, urging us to spend time on its streets, listen to its music, and embrace its journey.

Since 2005, Kettle Art Gallery has been the area’s premier showcase for emerging and established North Texas artists. The airy gallery hosts one-night shows as well as longer exhibits devoted to either solo artists or groups. 2650-B Main Street; 972-834-6989; kettleart.com.

Kettle cofounder Kirk Hopper established his own gallery nearby in 2008. Kirk Hopper Fine Art exhibits the work of one or two artists at a time, with styles including realism, pop art, and abstracts in painting, sculpture, drawing, mixed media, and photography. 3008 Commerce Street; 214-760-9230; kirkhopperfineart.com.

You’ll find a selection of stunning baseball bats (made on-site) as well as surfboards and snowboards at Warstic, owned by musician Jack White (formerly of The White Stripes) and Ian Kinsler, a former Major League Baseball player who played eight seasons with the Texas Rangers. 2816 Main Street; 844-WARSTIC (844-927-7842); warstic.com.

Edgy fashionistas will like Flea Style (formerly called The Dallas Flea), founded by a veteran lifestyle editor with a passion for vintage goods. 3009 Commerce Street; 469-520-3222; fleastyle.com. 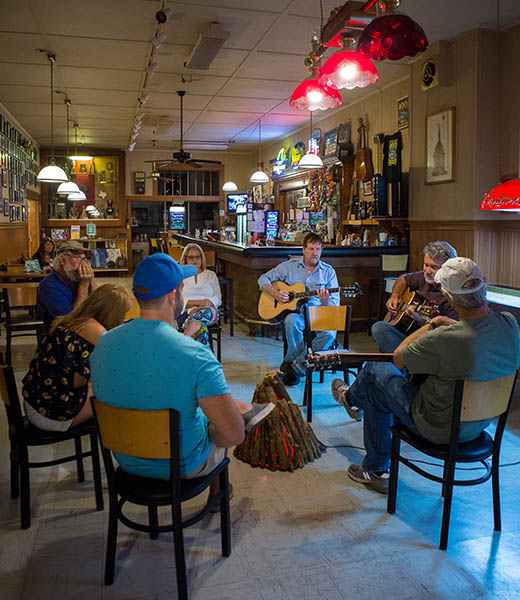 Where to listen to music

Deep Ellum’s musical heritage is richer than that of most Texas cities. Blind Lemon Jefferson, Lightnin’ Hopkins, Robert Johnson, and Bessie Smith were among the blues and jazz legends who rose to fame here in the 1920s, decades before the Old 97’s and the New Bohemians came along. Great music from solo artists and bands still plays from a multitude of stages.

You’ll find a fresh crop of restaurants and food-focused entrepreneurs.

Longtime favorites remain popular as well: Since its opening in 2003, Local continues chef-owner Tracy Miller’s slow-food efforts. Her roasted beets with goat cheese, pan-seared lobster cake over leek-endive salad, and herb-rubbed lamb loin with lavender-honey jus add up to a stellar dinner in the clean, modern interior of a 1908 hotel building. 2936 Elm Street, A; 214-752-7500; localdallas.com.

AllGood Café is especially swingin’ at breakfast time, when choice meals include chicken-fried steak topped with eggs and sausage gravy, and the Mega-Egg Sandwich, which layers fried eggs and shaved ham with avocado and cheddar on toasted sourdough. 2934 Main Street; 214-742-5362; allgoodcafe.com. 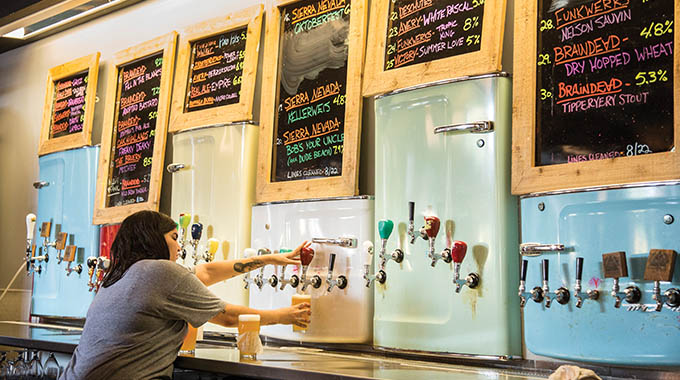 Many of the best watering holes also have good eats.

Deep Ellum Brewing Company’s Taproom and Kitchen pours its own brews, including a popular Dallas Blonde and Deep Ellum IPA. The IPA jalapeño hummus is addictive, as are loaded tots and pulled pork tacos. They’re best enjoyed on the patio, where you can often catch live music. 2823 St. Louis Street; 214-888-3322; deepellumbrewing.com.

Newcomer The Sandbar Cantina and Grill brings the beach to this urban setting. The tropical escape offers 10 sand volleyball courts, local music, drinks like the Sunburn and the Skip and Go Naked, as well as noshes such as cucumber-crab salad, avocado fries, and half-pound burgers with all the trimmings. 214-647-1424; 317 S. Second Avenue; sandbarcantina.com.

High and Tight Barbershop is a 1920s barbershop up front and a cocktail lounge with live music and dancing in back. Bartenders whip up originals such as Mayahuels Awakening, which blends tequila and mescal with vanilla-laced cold-brew coffee, bourbon bitters, and cinnamon. 2701 Main Street, Suite 180/190; 214-741-1744; highandtightbarber.com/pages/bar

Then there’s triple-threat Adair’s Saloon, a grungy 1970s throwback dive, where Jack Daniels on the rocks and PBRs are the go-to-drinks, the cheeseburgers speak of a well-seasoned griddle, and the live music is always free. 2624 Commerce Street; 214-939-9900; adairssaloon.com.

How to get around

Consider taking DART to Deep Ellum and exploring the district on foot. dart.org.

Parking in Deep Ellum is free until 6 p.m. at most parking meters, and some streets aren’t metered. Surface lots scattered around the neighborhood fill quickly in the evening.