The West Texas town of Alpine has more than 40 murals within its borders, one for approximately every 125 residents.

Its neighbor Marfa may be better known for its art, but the works in Alpine, the county seat of Brewster County and the center of commerce of the Big Bend area, may feel more authentically “local.”

“A Tribute to Texas Musicians,” by Stylle Read.

These large-format paintings involve town or state history (like the recently completed Sgt. Pepper’s Lonely Hearts Club Band-esque collage of Texas musicians, pictured above), scenic mountain views, and local folklore. There may not be celebrity artists or showy conceptual pieces (the oft-photographed Prada Marfa art installation is about 60 miles west on Highway 90), but the murals of Alpine are worthy of a tour themselves. A few of the highlights: 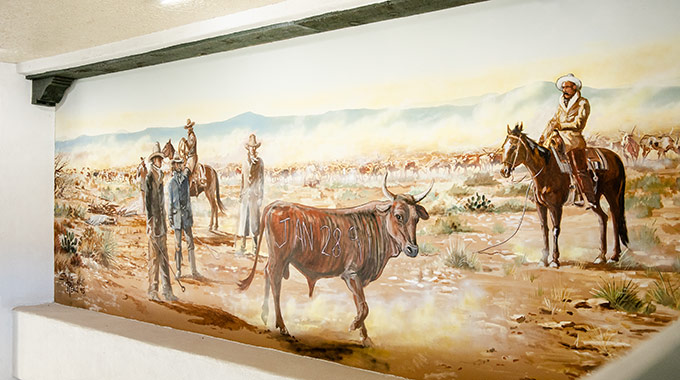 “The Murder Steer and Alpine Scenes,” by Stylle Read.

It wouldn’t be West Texas without a tall tale or two, and Western artist Stylle Read paid tribute to one such story, that of the “murder steer,” in the lobby of a Quality Inn on East Highway 90.

As legend goes, a dispute over an unbranded calf ended with 2 cowboys dead. The calf was then branded not by a ranch insignia, but simply the word murder, and set loose to fend for itself.

The murder steer was said to grow to massive size and develop red eyes, bringing bad luck to anyone who crossed its path. Here’s hoping that superstition doesn’t apply to artistic representations of the bull. 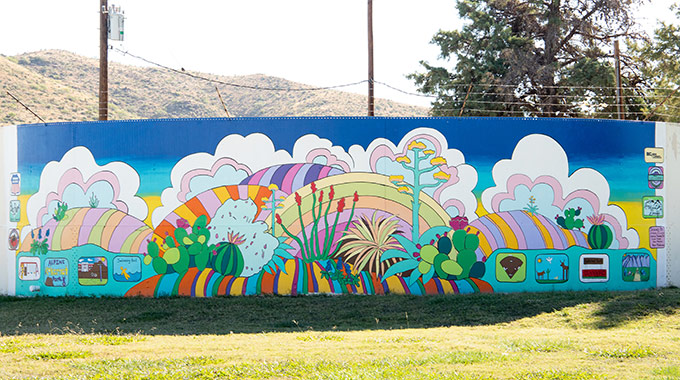 A departure from the more traditional styles on display throughout town, the Sul Ross Art Club–produced mural at Kokernot Municipal Park is more pop-psychedelia than realistic depiction of Alpine life. The mural plays with the natural curve of its water tank canvas, incorporating wavy, colorful hills and plump cacti to create a playful tone, appropriate for the town’s largest open space. 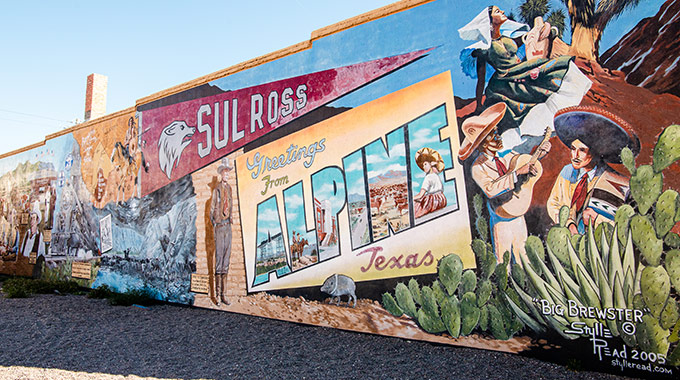 Stylle Read has created murals throughout the state, but he seems to have an affinity for the town of Alpine; he’s painted more than 10 murals here, including this one at Holland Avenue and Fifth Street.

It’s as much of a welcome wagon as a 21st-century visitor can expect, with representations of everything from Kokernot Field (home of the Alpine Cowboys, the town’s Pecos League baseball team and named by Sports Illustrated as “the best little ballpark in Texas”) to a pennant for Sul Ross State University, located on the town’s eastern edge. This may be the most Instagrammable wall art in town.

Robert Spuhler is a travel and culture writer who has been published in the New York Times, the San Francisco Chronicle, and various AAA publications.

You may also like: In Central Texas, Bartlett goes from ghost town to artist enclave