On this super-scenic route through Arizona, Utah, and Colorado, you’ll discover the Southwest’s grandest sights and uncover less-visited gems.

A vacation to the American Southwest should be like seeing your favorite band: You want all of the greatest hits, but also some rarities that please even the most die-hard fans.

This adventure-packed 12-day road trip through northern Arizona, southern Colorado, and southern Utah includes seven national parks, a series of spectacular scenic byways, a handful of colorful mountain towns, and one of the country’s highest concentrations of Native American archaeological sites. Along the way, you can ride a historic steam engine train, explore a famous slot canyon, hike to your heart’s content, and go kayaking, whitewater rafting, or zip lining.

This trip is equally good for campers or noncampers. Start your planning by digging out your AAA maps and following along on our route. When the time is right to go, this road trip is gonna be epic. 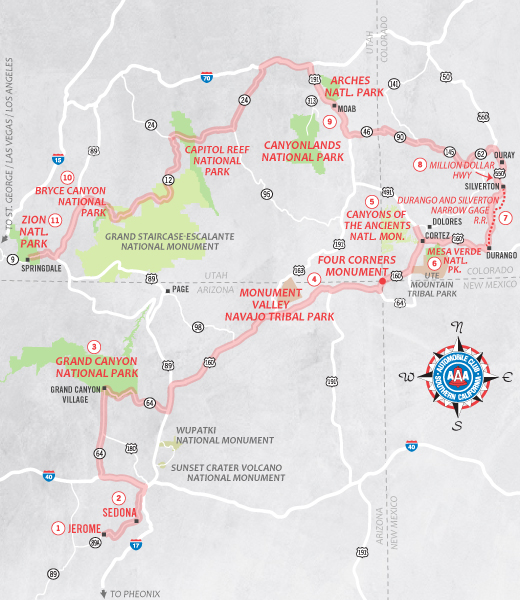 Day 2: Sedona and the Grand Canyon 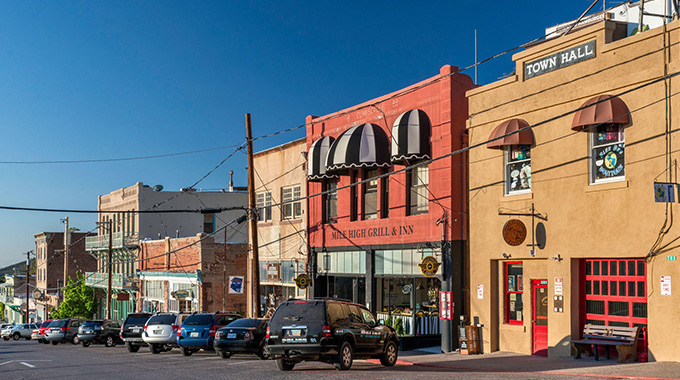 Begin with a scenic drive to the historic mile-high copper mining town of Jerome, whose 19th- and early 20th-century buildings cling to the side of Cleopatra Hill overlooking the Verde Valley.

Jerome is filled with art galleries, jewelry and clothing stores, and restaurants, as well as mine shafts and museums that tell the story of the days when this boomtown was filled with miners, gamblers, and prostitutes. A focal point of Jerome State Historic Park is the Douglas Mansion, built in 1916 by James S. Douglas on a hill overlooking his Little Daisy Mine.

Drive time: Jerome is about a 2-hour drive from Phoenix or roughly a 4½-hour drive from Las Vegas. From Los Angeles, the drive takes about 7½ hours, and the 28-mile stretch of State Route 89A from Prescott to Jerome is one of the prettiest—and curviest—drives in Arizona, passing through dense stands of ponderosa pines.

Day 2: Sedona and the Grand Canyon 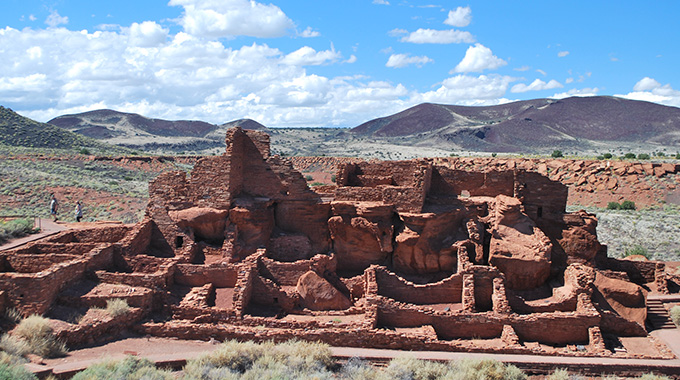 On your drive to the Grand Canyon, stretch your legs hiking to one of the famed vortexes in Sedona. Don’t miss the Chapel of the Holy Cross, an architectural wonder built into the red rocks, and the panoramic view from the Sedona Airport Overlook.

Interesting and less-visited attractions along the way to the South Rim include Wupatki National Monument and the 1,000-foot-high cinder cone of the Sunset Crater Volcano National Monument. Wupatki features remnants of dozens of 900-plus-year-old ancestral Puebloan villages. Both monuments can be accessed via a 34-mile scenic loop road 12 miles north of Flagstaff.

Spend the night at the South Rim of the Grand Canyon—either camping or in a hotel—because the canyon is prettiest at sunrise and sunset.

Drive time: It’s about a 45-minute drive from Jerome to Sedona and, from there, about 2½ hours to the South Rim of the Grand Canyon. Allow an extra two to three hours for the detour to Sunset Crater and Wuptaki, including time for exploration. 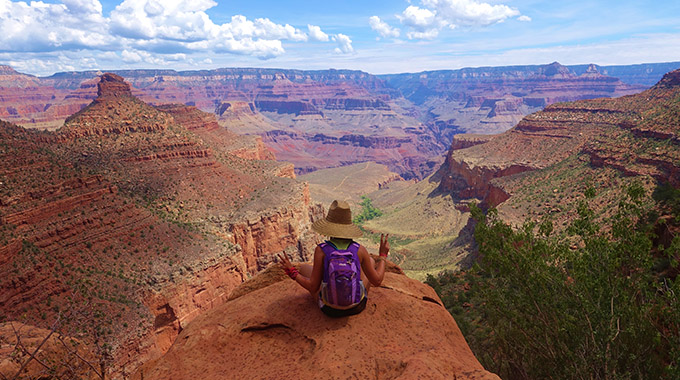 Enjoy sunrise along the South Rim of the Grand Canyon, and then spend the day exploring the canyon, deemed one of the world’s “Seven Natural Wonders.” Park rangers give nature and history talks at various points along the rim. Ranger talks are posted online and are listed in guides at the park’s visitors center. Hiking even a short distance below the rim provides an entirely different perspective.

Sit and watch the sunset at the historic El Tovar Hotel. Opened in 1905 and designed by Charles Whittlesey, chief architect of the Atchison, Topeka, and Santa Fe Railway, El Tovar is one of the crown jewels of the historic national park lodges. However, any location along the rim affords spectacular views. Spend a second night in the park. 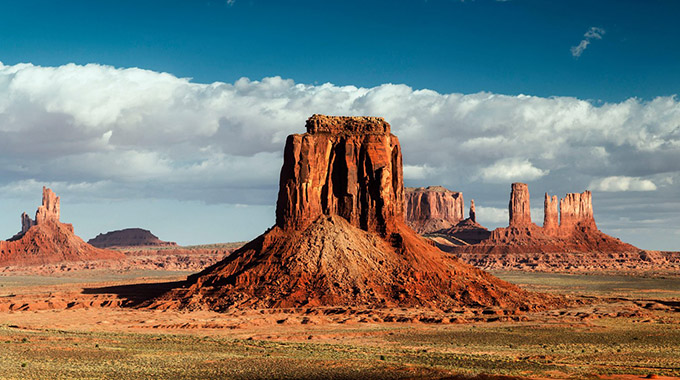 Wake up to another Grand Canyon sunrise, then continue on to Monument Valley and the Four Corners Monument before arriving in southwestern Colorado to spend the night in Cortez or Dolores.

Ambitious travelers also could detour to Page, Arizona,  where you can catch a tour of Antelope Canyon before completing the rest of the day’s itinerary. I did this with my kids, but this will add another four hours of driving and sightseeing time to the day’s trip, partly because the Navajo tribe controls access to the canyon and the only way to get there is by taking a guided tour.

Is it worth it? It is if you want to see one of the most famous slot canyons in the world—and if you start your day early, you’ll still make it to Monument Valley Tribal Park and Four Corners Monument by late afternoon.

Drive time: If you skip Antelope Canyon, it’s a roughly a 6-hour drive, not counting sightseeing time in Monument Valley, from El Tovar Hotel to Cortez or Dolores. 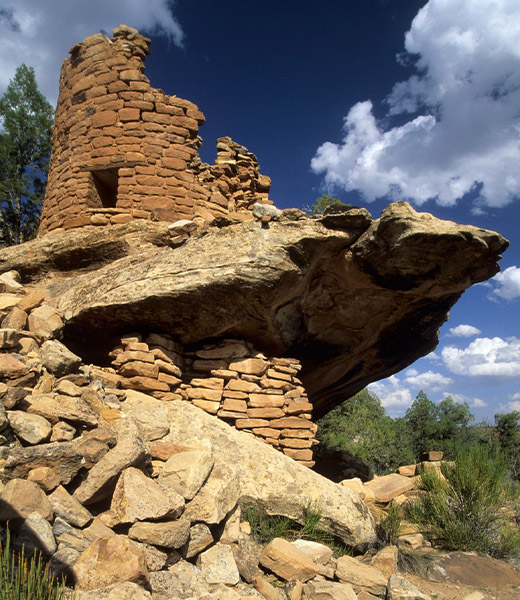 Take a day trip from Cortez to the Canyons of the Ancients National Monument, which features one of the highest concentrations of Native American archaeological sites in the U.S.—more than 6,300 of them, including cliff dwellings, kivas, petroglyphs, and sacred springs.

The Canyons of the Ancients Visitors Center and Museum features exhibitions of Ancestral Puebloan or Anasazi and other Native cultures of the Four Corners region as well as two 12th-century archaeological sites.

Also nearby is Ute Mountain Tribal Park, which features numerous archaeological and historical sites with cliff dwellings, pictographs, and petroglyphs. Visitors are allowed access only when accompanied by tribal guides. Half-day, full-day, and private tours are available with advance reservations. Spend a second night in Cortez or Dolores. 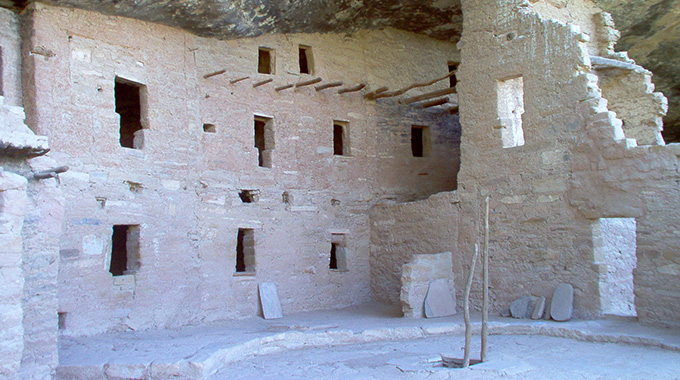 See the famous Ancestral Pueblo cliff dwellings at Mesa Verde National Park in the morning and spend a good portion of the day there before heading east to the historic railroad town of Durango to spend the night.

Drive time: It’s about a 1-hour drive to Mesa Verde, depending on where you stay in the Cortez/Dolores area, and another 50 minutes to Durango. 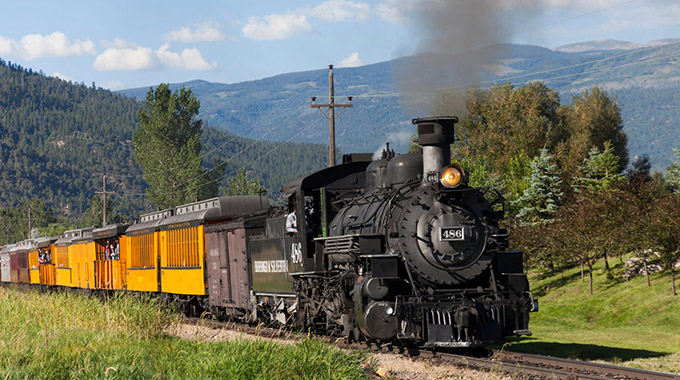 Travel by rail to the historic 9,318-foot mining town of Silverton, which is filled with Victorian buildings dating to the 1800s. Once part of the Denver and Rio Grande Western Railway, the train hauled gold and silver from Silverton from 1881 to the early 1900s.

Now a historical engineering landmark, the Durango and Silverton Narrow Gauge Railroad transports tourists and locals in century-old railroad cars along the Animas River, passing by the cliffs where Paul Newman and Robert Redford filmed their famous cliff-jumping scene in Butch Cassidy and the Sundance Kid.

Round-trip train rides leave Durango in the morning and provide more than two hours of free time in Silverton for shopping, museum visits, and lunch before heading back to Silverton in the afternoon. 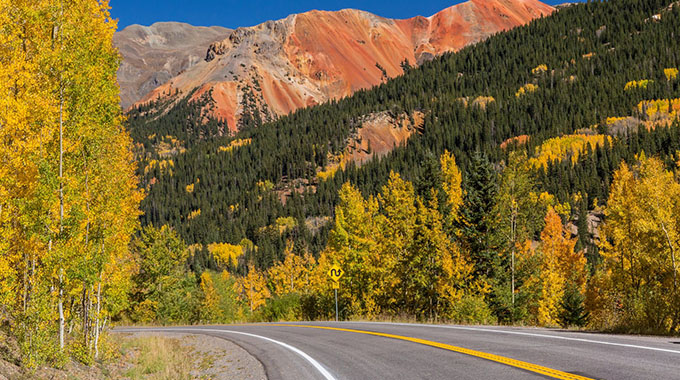 Take the long way from Durango to Moab, Utah, to sightsee along the drive. Head north along U.S. 550, passing through Silverton and Ouray.

“The Million Dollar Highway” is one of the most beautiful high-elevation drives in the country, with vistas of 13,000-foot peaks and steep mountainsides loaded with aspen and pine trees. It’s especially captivating in September and early October, when the aspens don fall colors.

Drive time: Expect about 6 hours behind the wheel, but the first half of this route is one of the most beautiful drives in the Rocky Mountains. 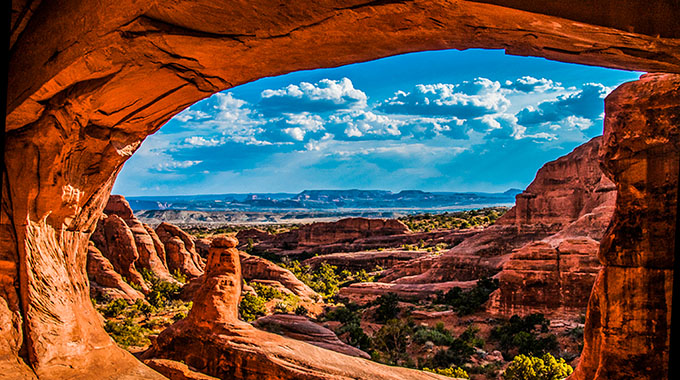 Arrive early to beat the crowds and spend the morning at Arches National Park, less than 20 miles outside of Moab. Hike the 3-mile (2.5-hour) round-trip trail to Delicate Arch, the 2-mile Broken Arch Loop, or any of shorter trails along the 18-mile (one-way) scenic drive.

In the afternoon, explore the Island in the Sky portion of Canyonlands National Park, less than 30 miles from the Arches visitors center. Take the easy, half-mile loop trail to Mesa Arch, and don’t miss the Grand View Point and Green River overlooks.

Pack a picnic lunch, because there are no restaurants between Arches and Canyonlands. Spend a second night in Moab.

Read more: How to escape the crowds in Utah’s Canyon Country parks 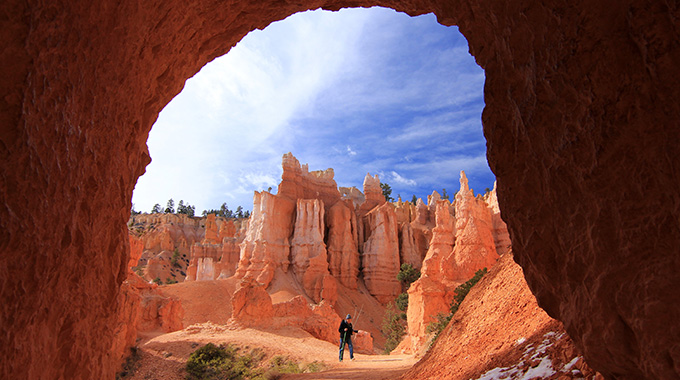 I recommend Bryce because it is one of the prettiest and most unusual of the national parks. It’s a high-elevation park, with roadside viewpoints over 9,000-feet high. It’s also famous for its dark skies, and the rangers provide astronomy talks. Bryce is also cooler and not as overrun with tourists as Zion, your final destination.

If you can’t get reservations in or near Bryce Canyon, another option is to camp at Cedar Breaks National Monument, which has landscape and geological formations similar to those of Bryce Canyon. 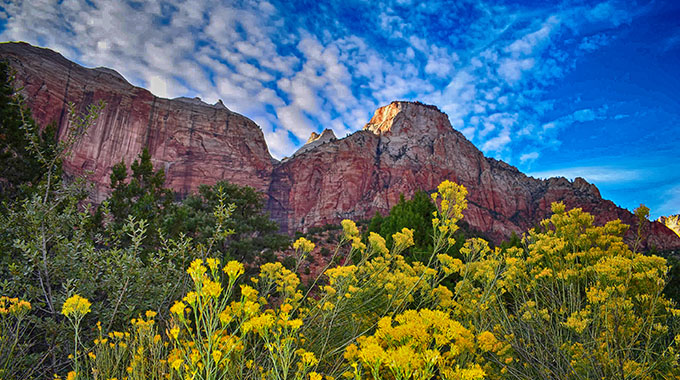 In high season, you will need to park and take a shuttle bus into the Virgin River Canyon if you want to see the most popular areas of Zion National Park. But there are many other short hiking trails in Zion.

This part of southern Utah gets quite hot during the summer, so it’s best to hike early in the day. Cottonwood trees are plentiful along the Virgin River and offer beautiful displays of color in the fall.

Spend the night inside the park, in the gateway town of Springdale, or, if you want to get a head start on the journey back to Las Vegas or the L.A. area, in St. George.

Places to stay in the Southwest 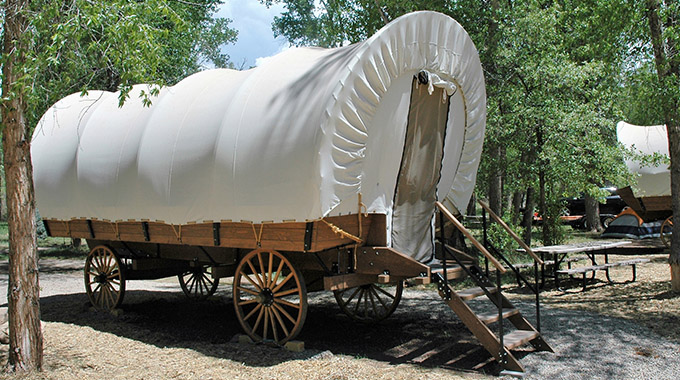 A covered wagon at the Dolores River Campground. Photo by Jeff Crider

Jerome, Arizona. “Haunted” hotel: The Spanish mission–style Jerome Grand Hotel was previously a hospital and is considered by some to be one of the most haunted places in Arizona. The Travel Channel filmed an episode of Ghost Adventures here in 2010.

Dolores, Colorado. Glamping tents: In addition to RV and tent sites, the Views RV Park and Campground offers furnished glamping tents, including an extra-large tent with a toilet and kitchen table sitting area.

Durango, Colorado. “Haunted” hotel: The Rochester Hotel, built in 1892, is on the register of the “100 Most Haunted Hotels in America.” Ghosts or no ghosts, guests appreciate the Old West style and the complimentary cruiser bicycles.

Moab, Utah. Glamping tents: Several of the furnished glamping tents at Under Canvas Moab have a wood deck, a full bathroom, and a hot shower. The Stargazer tent features a star-viewing window over the bed.

St. George, Utah. Polygamy history: A historical landmark, the Seven Wives Inn was built in 1873. Owner Edwin G. Woolley hid polygamists in the attic of his largest house after polygamy was outlawed by the U.S. government in 1882. One of the polygamists was Benjamin F. Johnson, the innkeepers' ancestor who had seven wives.

RV rentals: El Monte RV offers a selection of Class A and Class C rentals at pickup/drop-off locations that include Las Vegas, Los Angeles, and Phoenix.

Writer Jeff Crider is an avid traveler and outdoors enthusiast, and grew up camping and RVing in the Southwest. He also has a passion for American history.