A model of the Halcyon starcruiser is viewable by guests for a limited time in Disney’s Hollywood Studios at Disney World. | Photo by David Roark

When Disneyland and Disney World debuted Star Wars: Galaxy’s Edge in 2019 with roaming stormtroopers and Luke Skywalker’s beloved blue milk, the parks unveiled their most immersive lands to date. But in March, Disney World near Orlando upped the ante with the opening of Star Wars: Galactic Starcruiser, a first-of-its-kind lodging experience. It doesn’t come cheap, but fans willing to shell out at least $4,800 for 2 can spend 2 nights living and breathing Star Wars—sleeping aboard the starship, interacting with Star Wars characters, undertaking missions, visiting Galaxy’s Edge (with priority access to attractions), and even assuming a new identity.

Guests spend much of their time aboard the Halcyon. The starship hasn’t yet appeared in a Star Wars film, but it has been featured in comics and will appear in Star Wars: The Princess and the Scoundrel, a novel due out August 16. In it, Han Solo and Princess Leia reportedly honeymoon aboard the ship. 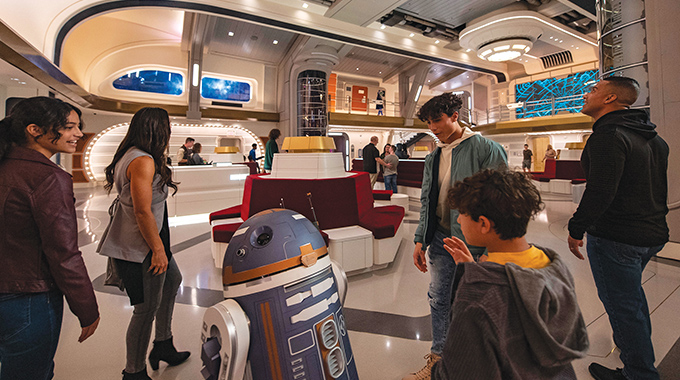 Astromech droid SK-62O greets guests in the Atrium of the Halcyon starcruiser. | Photo by Matt Stroshane

To get to the Halcyon—which, for the record, is planted solidly on terra firma—guests drive to the Galactic Starcruiser Terminal near Disney’s Hollywood Studios, where they board a Launch Pod to the ship. New arrivals are greeted in the lobby atrium and tour the Halcyon, where they might bump into Rey, Chewbacca, or a First Order lieutenant.

Every detail is designed to make guests feel as though they’re zooming through space. Engine sounds drift through corridors; windows look out at the cosmos; and every so often, the ship accelerates to light speed, with stars and other space vessels streaking by.

The Halcyon’s Sublight Lounge serves cocktails, including the bourbon-based Mark of the Huntress and the vodka-based Hoth Icebreaker. Kids are welcome in the lounge, and nonalcoholic drinks, including blue milk, are available. 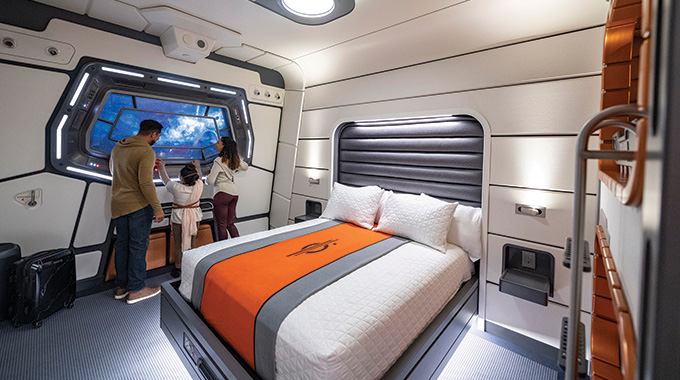 Cabin options range from a standard queen bed with additional bunks to a spacious 2-bedroom Grand Captain Suite. Each cabin has a bathroom, a window into space, a video assistant named D3-09, and an interactive TV with Earthly channels. 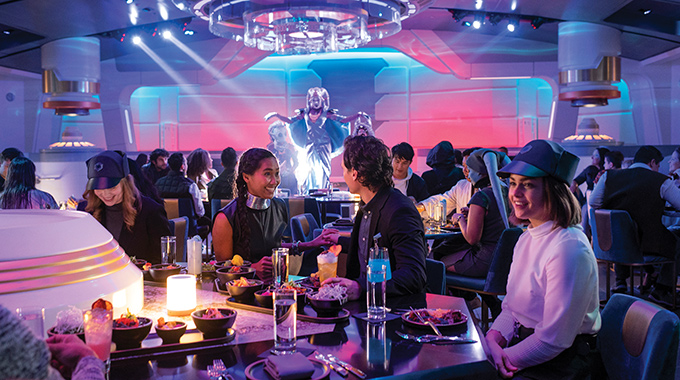 Halcyon starcruiser passengers enjoy a meal and performance by Gaya in the Crown of Corellia Dining Room. | Photo by Kent Phillips

Meals take place in the Crown of Corellia Dining Room. Imagineers worked with Disney chefs to create out-of-this-world dishes. Breakfast and lunch, served buffet style, feature items such as Meteor Eggs (a soft-cooked egg wrapped in sausage and deep fried in batter) and Pork and Cheese Takeaway (ham and cheese in a puff pastry). 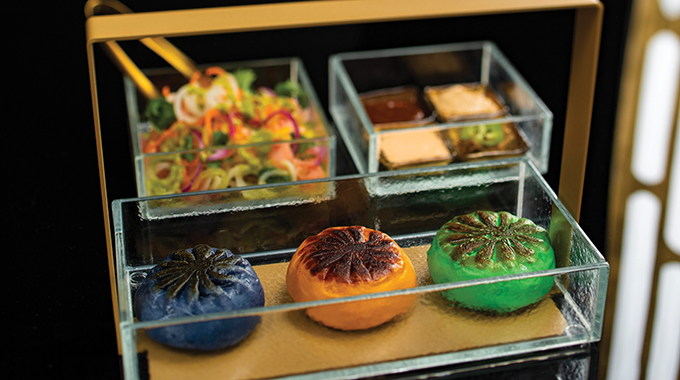 Dinners include options such as Iced Felucian Shrimp Cocktail and Spiral Dumplings.

Also featured at dinner are performances by Gaya, the most popular songstress in the galaxy.

Assuming a new identity isn’t required, but those who go all-in can don a costume (brought from home or purchased on-site) and make decisions that might affect their stay. For example, new recruits can get lightsaber training, but depending on participants’ choices, they might be prompted to use the training for “dark” purposes.

I experienced Star Wars: Galactic Starcruiser shortly before it opened to the public. While I’ve enjoyed Star Wars films and streaming shows, I’m no superfan, and I was hesitant to assume the role of a character. But after checking in, I found myself spontaneously inventing a persona: Josh, a wide-eyed tourist from Earth who’s a staunch supporter of the Resistance. I chose to wear street clothes, which fit my role, but some guests wore costumes.

As I inhabited this persona, I discovered that Josh had a bit of a dark side. Even as I was publicly showing Resistance sympathies, I became a secret informant for the First Order. I felt a little guilty about it—but in a good way. Guests aren’t required to role-play, but to get the most out of a stay, I recommend it. Participating turned out to be a form of escapism I didn’t know I’d enjoy, but I loved it.

Jordan Poblete has been writing about Disney since 2009 at his blog, disneyexaminer.com.