Oak Alley Plantation in Vacherie, Louisiana, has been a backdrop for a number of movies, including "Interview with the Vampire." | Photo courtesy Oak Alley Foundation

Escaping the pandemic, Americans have been spending more time at home in front of their television sets, but Southern viewers might be surprised to learn that many of the movies and television shows flickering in front of their eyes were not shot in Tinseltown but rather right in their own backyards.

For the past two decades, a growing number of film and TV productions have drifted from Southern California to the Deep South, lured by tax incentives and distinctive landscapes that range from Ozark mountains to swamps, forests, and the Gulf of Mexico. Because entertainment companies have increasingly come to Louisiana, Mississippi, and Arkansas, the states have stepped up with infrastructure and state-of-the-art facilities.

“I think that our unique character is one of our most valuable assets,” said Chris Stelly, executive director of Louisiana Entertainment, the state agency designed to attract and assist the state’s film and TV production. “We have had directors change the script and actually write the film for Louisiana. There is a creative spirit here that is hard to describe in words, but it resonates with producers and directors.”

The temperate climates of Arkansas, Louisiana, and Mississippi allow companies to film exteriors year-round. There’s also no shortage of rural areas and wilderness: Mud, for instance, starring Matthew McConaughey and Reese Witherspoon, was filmed in 2011 in southeast Arkansas and included scenes on a remote Mississippi River island near the town of Eudora.

Additionally, Southern cityscapes can fill in for many metropolises. Baton Rouge doubled for the California cities of Los Angeles and Santa Monica in 2011’s Battle: Los Angeles, as well as for New York and Tokyo in other movies.

Here’s a sampling of the many films and shows produced in this trio of Southern states, along with some places where you can walk in the footsteps of your favorite stars.

The Magnolia State’s long history of film and TV production dates back to native son Tennessee Williams’ Baby Doll (1956) and Sydney Pollack’s 1966 This Property Is Condemned, starring a young Robert Redford and Natalie Wood. Visitors to Bay St. Louis will recognize the town’s train depot and Depot District in that film, as well as the façade of the First Missionary Baptist Church that was modified to resemble a small-town movie theater.

This Greenwood, Mississippi, home served as the exterior of Skeeter Phelan’s (Emma Stone) house in "The Help." | Photo by Dale Robinette/Greenwood Convention and Visitors Bureau 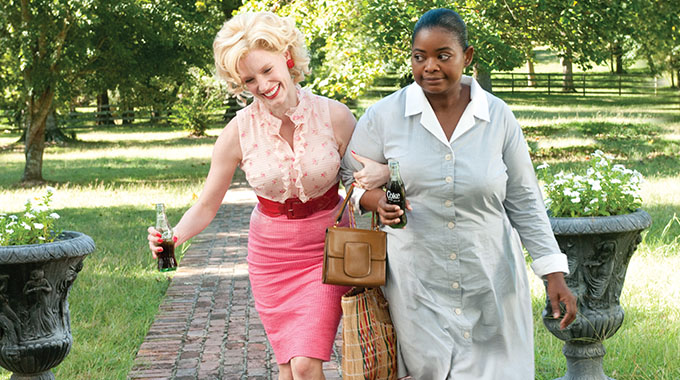 Several residences in and around Greenwood, Mississippi, served as the characters’ homes in "The Help," including Celia Foote’s (Jessica Chastain) home where she befriended Minny Jackson (Octavia Spencer). | Photo by Dale Robinette/Greenwood Convention and Visitors Bureau

Download a brochure listing the sites from the Greenwood Convention and Visitors Bureau. Visitors can even enjoy a Help-inspired cooking class with Southern specialties like fried chicken at Greenwood’s Viking Cooking School. 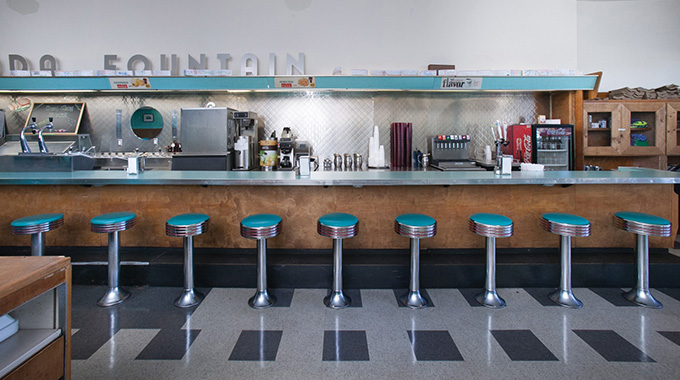 More sites from The Help can be found in Jackson, including the Mayflower Café, where Skeeter and her new beau had dinner, and Brent’s Drugs, where she met up with Hilly (Bryce Dallas Howard) and her friends.

Just northeast of Jackson, Canton’s down-home charm has earned it the moniker “Movie Capital of Mississippi.” Canton’s square and courthouse may be best known from the Coen brothers’ award-winning O Brother, Where Art Thou? (2000) and the 1996 adaptation of John Grisham’s novel, A Time to Kill. Other films shot in the town include My Dog Skip (2000), The Ponder Heart (2001), and the documentary Waking in Mississippi (1998).

The small screen has thrust Laurel into the limelight because of HGTV’s popular makeover show Home Town, starring Laurel’s own Erin and Ben Napier. While homes restored by the couple in this southeast Mississippi community are not open to the public, many visitors come to enjoy the historic downtown spotlighted in the show and to shop at the Napiers’ Laurel Mercantile. 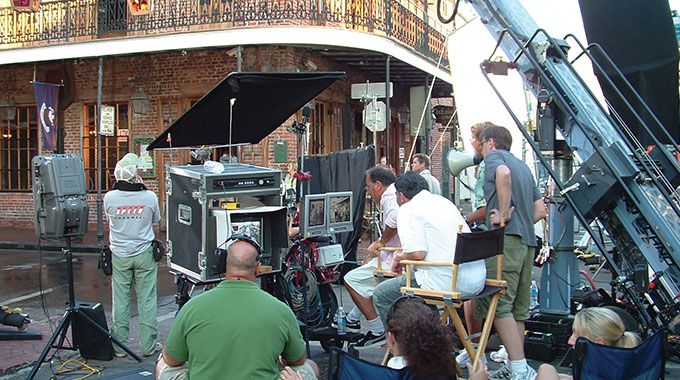 With its unique Creole architecture, culture, and history, New Orleans is perfect for Hollywood stories, whether as part of the plot or as a backdrop. New Orleans accounts for a significant portion of the more than 500 films and television shows that have been shot in Louisiana to date. 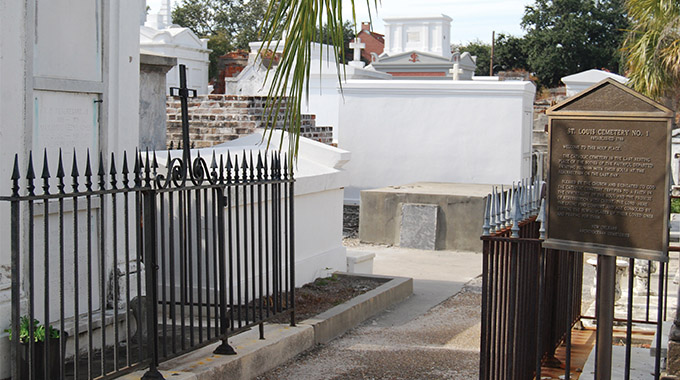 Visitors to St. Louis Cemetery No. 1 often look for the site where a part of "Easy Rider" was filmed. | Photo courtesy Louisiana Office of Tourism

And Easy Rider, the 1969 movie with Peter Fonda, Jack Nicholson, and Dennis Hopper, follows motorcyclists traveling across the country to New Orleans at Mardi Gras. A concluding scene was shot at St. Louis Cemetery No. 1, and tourists seek that spot, as well as the grave of voodoo queen Marie Laveau and the pyramid-shaped tomb actor Nicolas Cage had constructed for his eventual funeral.

The Big Easy (1986) with Dennis Quaid, Ellen Barkin, and John Goodman used the city’s landmarks, as did JFK (1991) starring Kevin Costner as district attorney Jim Garrison. The Roosevelt Hotel’s Sazerac Restaurant provided the setting for a scene in which lawyer Dean Andrews, played by John Candy, eludes Garrison’s questions. Antoine’s Restaurant also appeared in that film and in John Grisham’s The Pelican Brief (1993) and The Client (1994).

Crime-show fans know that NCIS: New Orleans with Scott Bakula, now in its seventh season, uses many on-site locations, including the R Bar at the Royal Street Inn that’s the show’s Tru Tone Bar. Those who stop in for a drink, however, might be disappointed because the watering hole’s interior is shot on a soundstage.

Neither of the Coven sites is open to visitors, but people can tour majestic Oak Alley Plantation (pictured at top), which served as the main plantation house in Anne Rice’s Interview with the Vampire (1994) starring Brad Pitt and Tom Cruise. A host of other movies and television shows have filmed at the stunning national historic site, located just west of New Orleans in Vacherie. 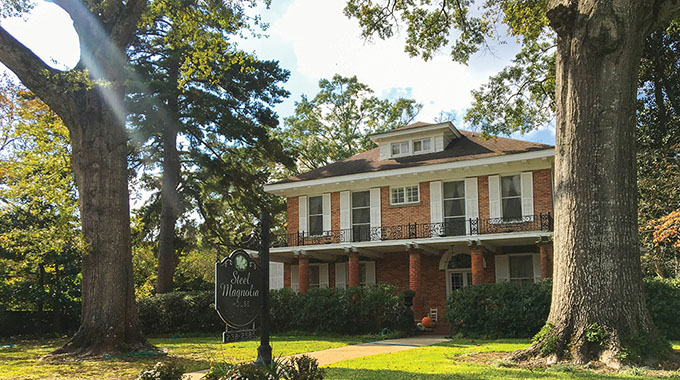 The fictional Eatenton family home from "Steel Magnolias" in Natchitoches, Louisiana, is now a bed and breakfast. Photo by Maggie Bowles/Louisiana Office of Tourism

Devotees of Steel Magnolias, the 1989 film based on a play by Louisiana native Robert Harling, flock to Harling’s hometown of Natchitoches to retrace the steps of the film’s actors—Dolly Parton, Julia Roberts, Shirley MacLaine, Daryl Hannah, Sally Field, and Olympia Dukakis. Visitors may stay at the Steel Magnolia House bed and breakfast, the movie’s fictional Eatenton family home; visit the historic St. Augustine Church where Roberts’ character was married; and walk through the American Cemetery, site of the film’s emotional climactic scene. A trail guide, available online from the Natchitoches Convention and Visitors Bureau, notes sites from Steel Magnolias and other locally shot movies.

Like Louisiana and Mississippi, Arkansas provides diverse landscapes for filmmakers. Elia Kazan used the east Arkansas town of Piggott for his 1957 film, A Face in the Crowd, which gave Andy Griffith his first big-screen role. Critics hailed his portrayal of a boisterous entertainer discovered in an Arkansas drunk tank who rises to the pinnacle of celebrity and demagoguery. Locations seen on screen include Piggott’s town square and the Matilda and Karl Pfeiffer Museum.

In the state’s southwest corner, The Legend of Boggy Creek (1972) and its sequels used Fouke’s swampy terrain and local residents for its swamp monster story.

Billy Bob Thornton filmed his 1996 drama Sling Blade entirely in Benton. The Arkansas native—who wrote, directed, and starred in the movie—received an Oscar nomination for best actor, and the film won the Academy Award for Best Adapted Screenplay. Locations to visit include C.W. Lewis Stadium and Gary’s Sling Blade Drive-In.

Director Norman Jewison’s World War II-era film A Soldier’s Story (1984) used Fort Chaffee in northwest Arkansas for a Louisiana army base and Lamar Porter Athletic Field in Little Rock as the site of a baseball game between black and white players. Because the film’s shoestring budget provided little money to pay for extras, then-Governor Bill Clinton approved the use of the Arkansas Army National Guard for a marching parade sequence. 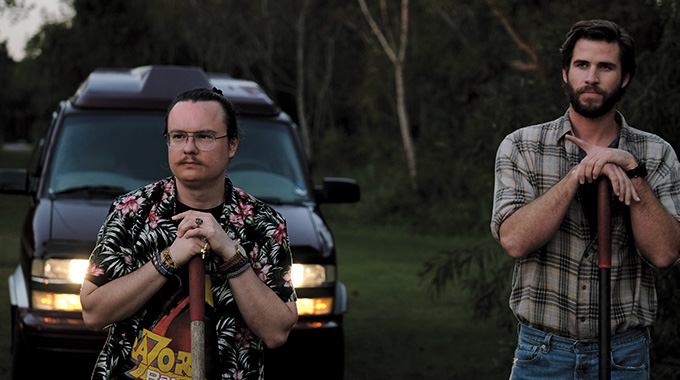 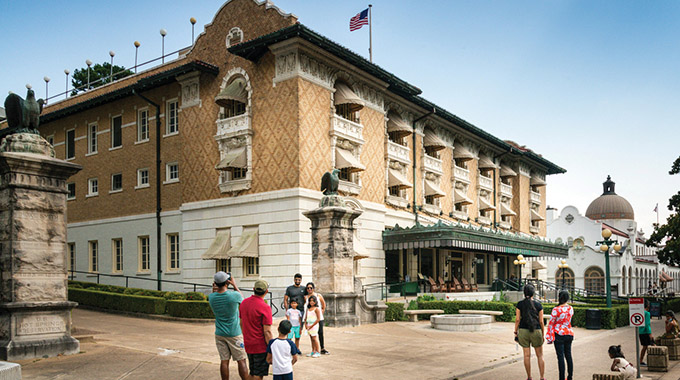 The Fordyce Bathhouse is among the Hot Springs, Arkansas, landmarks fans will recognize in the movie, "Arkansas." | Photo by Dale Robinette/Greenwood Convention and Visitors Bureau

While principally shot in Alabama, the film showcases landmarks in Hot Springs, Arkansas, including the Arlington Resort and Spa, the Fordyce Bathhouse, and the music venue Maxine’s Live.

Set to debut last spring at the SXSW film festival in Austin, Texas, Arkansas was released on streaming platforms instead when COVID-19 forced the cancellation of the festival.

Although the pandemic has put a damper on filming in the South, Stelly said projects have started to return, and more are on the way. “2021 is shaping up to be a record year,” Stelly said. “We’ve got a lot going on.”

Chances are that the next Netflix series or a big blockbuster will be shot in the tri-state area, giving Southerners even more chances to see their hometowns on screen.

Cheré Coen is a contributor from Lafayette, Louisiana.