8 military museums in the South

The National WWII Museum is expanding, and the final pavilion on the 6-acre campus is scheduled to be finished in 2022. | Photo by Louisiana Office of Tourism/Tim Mueller

Around Independence Day, symbols of patriotism become more prevalent: American flags waving in the breeze, the stirring sounds of “The Star-Spangled Banner,” and spectacular displays of fireworks illuminating the night sky.

Yet another meaningful way to celebrate America is to visit military museums and sites that both commemorate the nation’s fight for freedom and honor those who served. Warfare has been entwined with the nation since its founding, and these Southern sites help us understand that complex history and recognize the role our armed forces have played. Plus, they provide a dose of local culture along the way.

For such an auspicious institution, the National WWII Museum began rather humbly. The late historian and author Stephen Ambrose and his University of New Orleans (UNO) colleague and fellow historian, Nick Mueller, began talking in 1990 about starting a small museum dedicated to D-Day on the UNO campus. It would house artifacts and oral histories related to June 6, 1944, the day Allied forces invaded Normandy, which led to the eventual liberation of Western Europe.

Years of drumming up support and funding finally resulted, 10 years later, in the opening of the National D-Day Museum in New Orleans’ popular Arts and Warehouse District. Congress subsequently designated it as the National WWII Museum.

Along with this recognition has come its ongoing expansion. Several pavilions focus on various facets of the war. The Louisiana Memorial Pavilion takes visitors to the beaches of Normandy and to the events that led to the Allied victory. Visitors will see all of the tools of the war effort, including tanks, jeeps, a halftrack, a restored C-47 aircraft, and an LCVP, or “Higgins Boat.” Higgins Industries in New Orleans built more than 20,000 of the boats that were used in the war’s major amphibious landings.

Occasionally, the museum spotlights artifacts not typically on public display during “Out of the Vault” tours. You can also schedule a private behind-the-scenes tour for more insights. Special commemorative events are held on the anniversary of D-Day and other significant dates.

Among the museum’s additions, the Hall of Democracy opened in 2019 to educate visitors and virtual guests throughout the world about the American experience in the war. In addition to space for traveling exhibits, the hall’s high points include oral histories and an extensive research library.

Expected to be completed this year, the Bollinger Canopy of Peace rises 148 feet above the museum and can be seen throughout New Orleans. When finished, bright white panels will reflect sunlight during the day. As night falls, the canopy will become even more illuminating as a state-of-the-art lighting system spotlights the new landmark on the New Orleans skyline.

Construction on the last pavilion of the 6-acre campus, the three-level Liberation Pavilion, is expected to be completed in 2022. The building’s exhibits will highlight the end of World War II, the postwar years, and the conflict’s continuing impact on our lives.

Just down the Mississippi River from New Orleans lies Chalmette Battlefield, one of six sites in the Jean Lafitte National Historical Park and Preserve. The battlefield provides visitors with a glimpse of the Battle of New Orleans that was fought there on January 8, 1815. Artillery parked at strategic locations around the site help tell the story of the last major battle of the War of 1812 between the United States and Britain.

Explore the park’s French Quarter Visitors Center to learn about the war and how it ended up near the banks of the Mississippi River. And, yes, legendary pirate Jean Lafitte did play a part in the battle. In fact, commanding general Andrew Jackson found the assistance from Lafitte’s band of smugglers and pirates, known as Baratarians, invaluable. President James Madison was so thankful for their help that he offered pardons to the Baratarians for their previous crimes. Lafitte later moved his pirating operations to Galveston, Texas.

The North Louisiana Military Museum, located in Ruston, Louisiana, is home to more than 150 years of American military history. The museum exhibits weapons, uniforms, flags, and artifacts from many of our nation's major conflicts. | Photo by Louisiana Office of Tourism/Tim Mueller

For a broader view of military history, from the Civil War through the war on terrorism, pore over thousands of artifacts at the North Louisiana Military Museum in Ruston, located between Shreveport and Monroe. Weapons, photographs, flags, helmets, and an impressive collection of uniforms comprise the assembled artifacts.

In addition to noteworthy exhibits on various conflicts, you’ll discover displays dedicated to women in the military and the American Red Cross. The remnants of war extend outdoors with helicopters, tanks, artillery, anti-aircraft guns, and a Civil War cannon.

Visitors also will learn about the locals who played a part in American military conflicts. Indeed, area veterans and their families donated a large portion of the items on display.

Soon after Arkansas gained statehood in 1836, the federal government built a military arsenal in what is now downtown Little Rock to store munitions and weapons in defense of the frontier. In the late 19th century, the base moved to a new home in North Little Rock, while the city received the arsenal grounds for a public park, the first in Little Rock.

The only surviving remnant of the former arsenal’s 36-acre site is the Tower Building. A National Historic Landmark, the former munitions warehouse is among the oldest structures in central Arkansas. In the early 1940s, the abandoned building was turned into a natural history museum that closed in 1997.

After extensive renovation, the Tower Building was reborn in 2001 as the MacArthur Museum of Arkansas Military History. It shares its title with its park location, both named after Gen. Douglas MacArthur, who was born in the Tower Building in 1880 when his father was stationed at the arsenal.

The museum chronicles Arkansas’ military heritage from before statehood to today. Through artifacts and exhibits, galleries preserve the contributions of Arkansas men and women who served in the armed forces. The many World War II images, part of a collection of more than 4,600 original press photographs, are fascinating. Naturally, visitors will find plenty of compelling information on the life of the museum’s namesake. 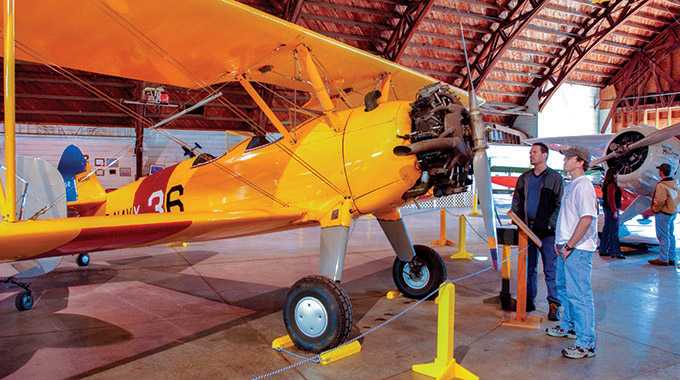 The Arkansas Air and Military Museum is located at Drake Field in an all-wood hangar. | Photo courtesy Arkansas Department of Parks, Heritage, and Tourism

The Arkansas Air and Military Museum in Fayetteville looks at military history through its transportation. You’ll see such military aircraft as a replica of a Boeing-Stearman biplane that was used to train pilots and a Bell AH-1S Cobra, one of the first attack helicopter models. Vehicles on display include military ambulances and a British Ferret armored car with grenade-launching tubes.

Located at Drake Field in an all-wood hangar, the museum also appeals to aviation history enthusiasts with a collection of non-military planes dating to the 1920s. Visitors will appreciate an exhibit on Arkansas native Louise Thaden, a pioneer in the golden days of aviation and a colleague of Amelia Earhart.

Waterways are vital in wars to move troops and supplies. In the American Civil War, control of the Mississippi River was of paramount importance. Led by Gen. Ulysses S. Grant, the Union Army set its sights on the Confederate stronghold of Vicksburg, Mississippi, in late spring of 1863. After a 47-day siege, Grant captured Vicksburg and the river.

Today, Vicksburg National Military Park chronicles the 14-month campaign that culminated in the siege, and it contains more than 1,400 historic monuments and markers. The park’s 16-mile sightseeing road operates as a self-guided driving tour with 15 stops to explore. For a deeper examination of the park’s history, visitors can hire one of the park’s licensed battlefield guides. If you decide on a DIY tour, an available cell phone tour or app can help.

A must-see is the USS Cairo, one of the Union’s gunboats that prowled the Mississippi River and its connected waterways. The ironclad warship was sunk by Confederate torpedoes in 1862 and spent more than 100 years on the river bottom before its recovery.

Located at Camp Shelby Joint Forces Training Center, which has served as a training site for all branches of the military since World War I, the Mississippi Armed Forces Museum shares a comprehensive history of the American military. Through thousands of artifacts, documents, videos, re-created trenches and jungles, and an outdoor vehicle park, the museum examines Mississippi’s role in the U.S. Armed Forces.

Visitors must enter through the North or South gates from Highway 49, and guests 16 and older must show photo identification.

The African American Military History Museum started as a USO club built by community volunteers in 1942. Now on the National Register of Historic Places, it served as a home away from home for African American soldiers stationed at Camp Shelby.

The museum opened in 2009 to commemorate the service of African Americans from the Revolutionary War through modern times. Exhibits focus on Buffalo Soldiers, USO history, and the desegregation of the military. But more than anything, it’s the stories of the people like Hattiesburg native Jesse Leroy Brown, the first African American to complete U.S. Navy flight training, that will captivate you.

Karen Gibson is a contributor from Norman, Oklahoma.