My mountain bike’s knobby front tire teetered on the lip of a large stone slab at the top of a trail called Dragon Scales. The chunky path before me looked like something out of Tolkien’s Middle-earth, a wagon road rolling through a pretty Shire. This flight of imagination struck me as I pedaled across the hilly outskirts of Bentonville. Famous for being the worldwide headquarters of retail giant Walmart, this Arkansas town rests in a bucolic zone in the foothills of the Ozarks, about 30 miles north of Fayetteville, home to the University of Arkansas. Buzz surrounding Bentonville’s emerging mountain-biking scene drew me here, but I found so much more than just great cycling.

Maybe I shouldn’t have been so surprised. For years, vendors seeking to do business with Walmart have traveled to Bentonville, a pilgrimage the late company founder Sam Walton insisted they make. In 1962, Walton launched his first Walmart store in Rogers, just down the road. Walton, of course, went on to become a business legend and died a billionaire many times over. Today, nearly 10,600 Walmart-affiliated shops dot the globe, with more than 4,700 Walmart stores in the U.S. Thanks in part to investments made by Walton’s heirs who still call the city home, Bentonville has blossomed into a bona fide destination for cyclists, art lovers, and foodies.

The handsome little city of about 55,000 residents is around 3 hours by car from Little Rock. Moreover, Bentonville boasts a busy regional airport with frequent nonstop flights from the East, West, and Gulf coasts. While business execs have long traveled to Bentonville, fun-seeking travelers began arriving about a decade ago.

Bentonville started to become known for more than just Walmart when Alice Walton, Sam’s daughter, unveiled the Crystal Bridges Museum of American Art in 2011. Commissioned to showcase her impressive art collection and designed by noted architect Moshe Safdie, the 200,000-square-foot venue opened to rave reviews. Built amid a 120-acre woodland, the main galleries are suspended over a spring-fed lake, while paintings include masterpieces by Thomas Eakins, Georgia O’Keeffe, and Andy Warhol. A new expansion will add 100,000 square feet.

Free admission and community outreach have been hallmarks of the museum. Earlier in the COVID pandemic, the staff delivered food, sanitation kits, and art supplies through local nonprofits to thousands of families in the region. During my visit to Crystal Bridges, attendance was thin in the absence of large school groups, so I had plenty of space to contemplate several centuries’ worth of portraiture and landscape painting reflecting a distinct American pride. I could see how this place helped put Bentonville on the map.

The Walton family largesse has benefited another cultural institution: the Momentary, which opened in 2020 as a satellite to Crystal Bridges. Along with a performing-arts space, the Momentary has rotating exhibits that focus on contemporary artists and designers. In fact, each spring, the Momentary hosts the Northwest Arkansas Fashion Week and the FreshGrass music festival. 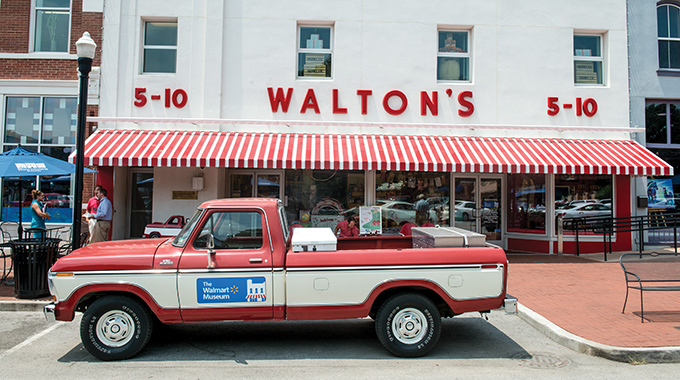 The town is also home to the Walmart Museum, which tells the story of Sam Walton and the business empire he built. Raised in Missouri, Walton got his start with the Benjamin Franklin chain of variety stores. In 1950, after losing his first lease in eastern Arkansas, he opened a new shop in Bentonville, which became the Walton’s 5&10 (the storefront is now occupied by the charming Walmart Museum). Walton split from the Franklin group after they rejected his proposal to design a new chain of one-stop shops for discounted items. “In 15 years’ time, [Walmart] became the largest independent variety store in the United States,” Walton wrote in his best-selling, straight-talking autobiography, Made in America.

As Walmart retools itself to stay competitive in the age of Amazon, some critics still complain that the big-box phenomenon is killing local retailers and small-town mom-and-pop stores. Meanwhile, the Walmart Museum reminds us that Walton was ahead of his time. The front sales area displays timeworn games, puzzles, and even old-fashioned Red Ryder BB guns. Historic newspaper ads adorn the walls. As a peppy guide led my tour, I noted the old pickup Sam Walton drove to go hunting with his beloved bird dogs. 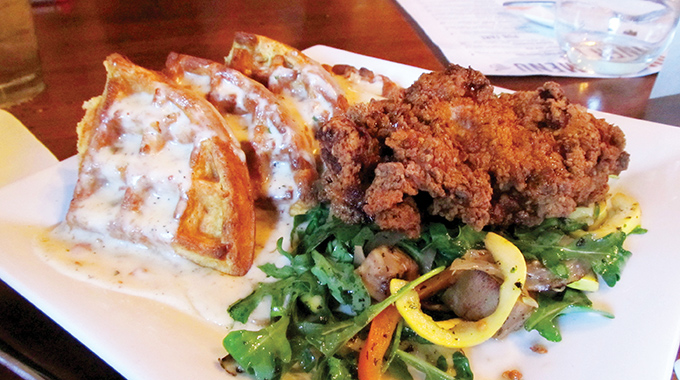 With all the cycling and cultural touring I was doing, I worked up an appetite. Fortunately, Bentonville has plenty of bistros, brasseries, and breweries. Several chefs in town have embraced “High South” cuisine, a farm-to-table approach to traditional recipes of the Ozark region. One night I had dinner at Tusk & Trotter, where the gregarious owner, chef Rob Nelson, shows off his High South bona fides with Arkansas fritters loaded with beef and sausage, and an Ozark Cobb salad made with local greens. For my entrée, I dug into a delicious grilled rib eye topped with a peppery butter sauce. 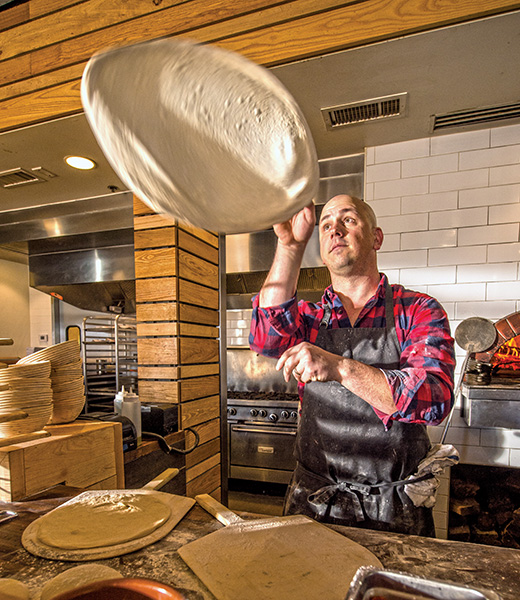 “The term that floats around is High South,” Wetzel explained. “It’s still evolving, but it’s very exciting to see the synergy that’s happening among the farmers, producers, and chefs.”

For lunch after one ride, I stepped into The Hub Bike Lounge, a unique sideline business for professional trail builders Nathan “Woody” and Kelly Woodruff. Housed in a small complex with office space, a guide service, and a boutique bike shop, The Hub serves tacos and wraps, as well as coffee and microbrews. I enjoyed tasty birria and a cold beer. Out front, I noticed that nearly every passing car had a high-end bike rack, and I soon lost track of the number of cyclists riding by on slim roadies, burly mountain bikes, and electric bikes.

Bentonville seems bent on updating the traditional company-town model with a booming tourism business—thanks in no small part to the Walton family. Sam’s heirs continue to pour a portion of their inheritance into the community through the Walton Family Foundation. Beyond the world-class cultural offerings, the foundation funds a remarkable array of projects near and far, including bicycling and transportation infrastructure. 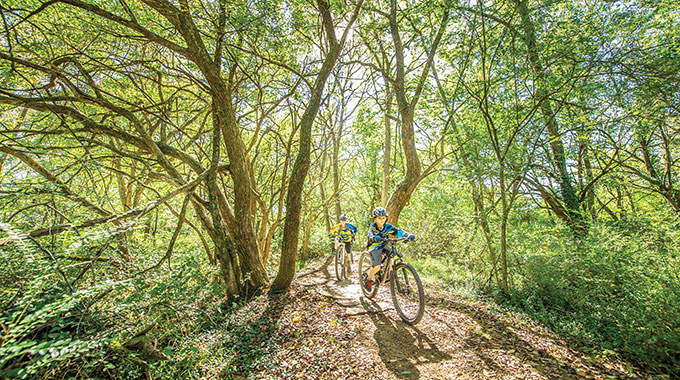 In fact, the Waltons have contributed $74 million to the area’s 160-mile trailway system, including the 40-mile Razorback Regional Greenway to Fayetteville. According to Home Region Program Manager Meredith Bergstrom, the push to expand regional trailways reflects synchronicity among tourism promotion, health initiatives, and the intense personal interest in cycling shared by Sam Walton’s grown grandsons Steuart and Tom. The Waltons see the bike paths as more than a pet project, Bergstrom says. Bentonville now rivals top cycling getaways such as Steamboat Springs, Sedona, and Austin. The resulting economic benefit to northwest Arkansas—from tourism revenue, cycling-related sales, and health benefits—approaches $140 million annually, according to a research firm.

Before heading back home to Texas, I wanted to sample the Coler Mountain Bike Preserve, a little over a mile west of downtown Bentonville. Opened in 2017, Coler has 17 miles of natural-surface trails, including some hair-raising downhill sections. I chased my guide, Preserve Manager Lori Reed, across the challenging Peak One Hub area before we hit the more family-friendly routes on Coler’s west side. The park also has a new campground with 17 tent sites on raised platforms, and parking spots that can accommodate vans or small RVs.

Pausing beneath the trees, I thought about the role Walmart has played in the outdoor recreation boom during the pandemic. How many of us turned to the iconic box store in need of a cheap tent or a camping lantern? Sam Walton, who let his hunting dogs sleep in his office, never outgrew his rustic roots either; after all, Arkansas is officially known as “the Natural State,” and it occurred to me that, despite his vast wealth, Sam Walton never outgrew Bentonville.

I don’t think his heirs have, either. In Made in America, Walton wrote: “Even if these little future Waltons don’t feel the need to work from dawn on into the night to stay ahead of the bill collector, I hope they’ll feel compelled to do something productive and useful and challenging with their lives.” Building bike trails isn’t curing cancer—one of the things Sam suggested later Walton generations might accomplish—but the past couple of years have proven that spending time in the fresh air and enjoying arts, culture, and tasty meals are crucial to our sense of well-being. That probably explains why exploring Bentonville over a few days restored mine.

Freelance writer Dan Oko is based in Houston. 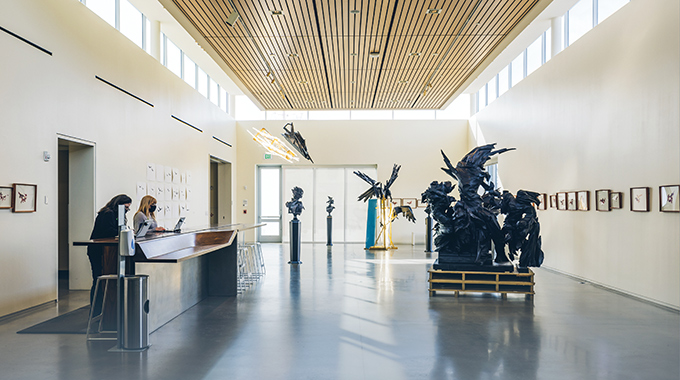 The bike-friendly 21c Museum Hotel, where I bunked, is centrally located and offers amenities for athletes and aesthetes alike.

Part of a small national chain of boutique hotels, 21c Bentonville has 104 airy rooms decked out with custom furniture, a 24-hour fitness center, and 12,000 square feet of art galleries that are open to the public. Rates start at $230.