Visiting Baton Rouge: What to see and do

Starting with the nation’s tallest state capitol building, Baton Rouge, Louisiana, is home to an elevated array of attractions, restaurants, outdoor experiences, and a rich history that dates back more than 300 years—with plenty of political intrigue and exploits to discover along the way.

When French-Canadian explorer Pierre Le Moyne d’Iberville discovered a cypress pole stained with animal blood at the boundary line between the Houma and Bayogoula tribes in 1699, he declared the land le baton rouge, French for “red stick.” Locals still refer to their city with the nickname “Red Stick,” and today you can see a commemorative Red Stick Sculpture at Scott’s Bluff on Southern University’s campus, where the original marker was located.

Delve deeper into the city’s political and cultural history at Louisiana’s Old State Capitol and ascend the spectacular spiral staircase within the castle-like building where state legislators first met in 1850. Following fires, a temporary takeover during the Civil War, abandonment, and a handful of makeovers, the national historic landmark now operates as a museum. Exhibits include a 4-D immersive show about the building.

Dedicated in 1932, the present Louisiana Capitol rises 34 stories above the skyline and was the brainchild of colorful and controversial Governor Huey P. Long, who boasted that St. Peter’s Basilica in Rome is the only building that compares with it. Assassinated in the Capitol, Long is buried on the grounds, and guided tours examine his legacy, the legislature, and the lofty art deco landmark. 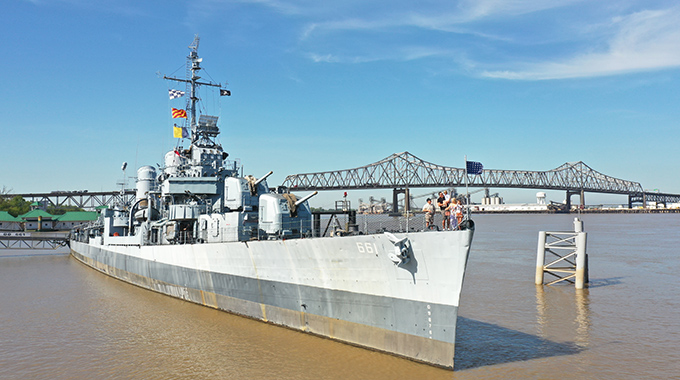 Step back in time on tours of the USS Kidd, a restored World War II-era destroyer. | Photo courtesy Louisiana Office of Tourism

Beyond politics, admire creativity on display at the Louisiana State University Museum of Art; climb aboard the USS Kidd, a World War II–era destroyer; and probe the solar system at the Louisiana Art & Science Museum.

Also, the Capitol Park Museum relates the city’s and state’s past with exhibits that include a 48-foot wooden shrimp trawler and a rare Civil War submarine, while Magnolia Mound Plantation interprets early French Creole life.

Plenty of nature awaits at Bluebonnet Swamp Nature Center. Follow gravel paths and boardwalks through this lovely 103-acre site that includes a cypress-tupelo swamp and hardwood forests. Glimpse hundreds of species of birds throughout the year. 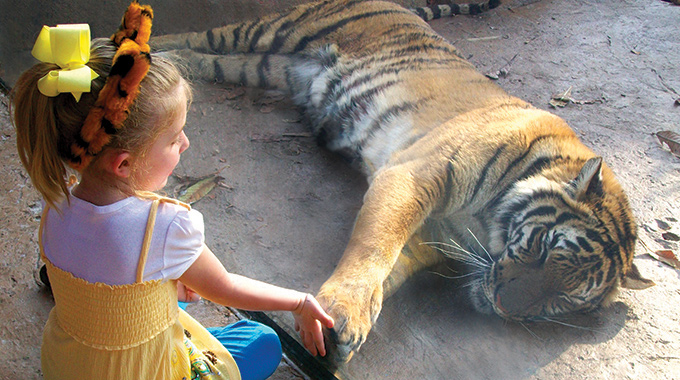 Observe more creatures at the Baton Rouge Zoo, where more than 800 animals from around the world inhabit the enclosures.

In the downtown district, Hands Producing Hope offers handcrafted items that range from clothing to skin care, home goods to gifts from Bangladesh, Costa Rica, Haiti, and more. Peruse more than 30 vendor booths and stalls for antiques, decor, and oddities at The Market at Circa 1857 in the Mid City neighborhood. 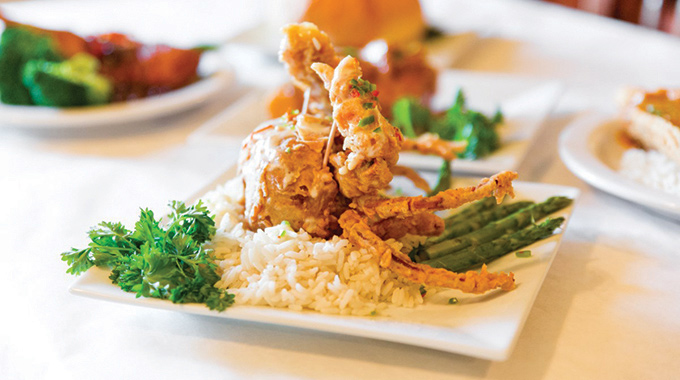 With a Las Vegas feel, L’Auberge Casino Hotel offers luxury rooms and suites, and plenty of slots and table games. Rates start at $139. With views of the Mississippi River, the Hotel Indigo Baton Rouge Downtown Riverfront nestles in the heart of the arts and entertainment district. Rates start at $150.

Debra Pamplin is a freelance writer from Folkston, Georgia.