On Ohio’s northern coast, the Marblehead Lighthouse will celebrate its 200th year in 2022. | Photo by Sara Winter/stock.adobe.com

Wherever a large body of water meets the shoreline, a lighthouse is sure to be nearby. Ohio’s northern coast is no exception: Shoreline signals have helped ships navigate Lake Erie's variations in depth and shifting sandy shoals for generations. This year is particularly significant, as Ohio’s most famous lighthouse, the 65-foot beacon located in the village of Marblehead, is celebrating its bicentennial.

According to lighthouse expert Kraig Anderson, there are about a dozen lighthouses on Lake Erie between Cleveland and Toledo. Here’s a tour of 5 of them, which ends (or begins, depending on your starting point) in Port Clinton. If you visit when it’s warm, consider packing a bathing suit since many Lake Erie towns have nice beaches. 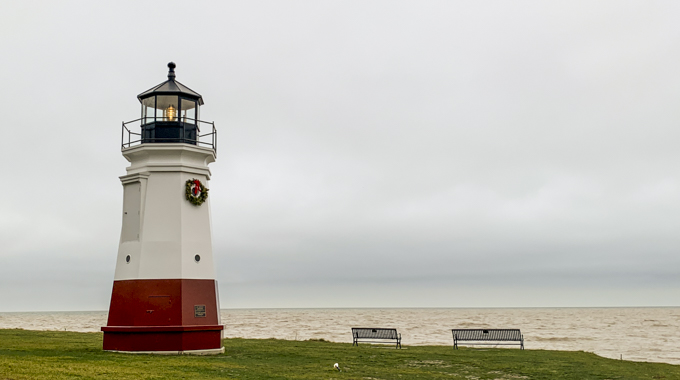 The Vermilion Lighthouse replicates the original, which was rebuilt on Lake Ontario in 1935. | Photo by Fran Golden

The very pretty town of Vermilion, about 45 miles west of downtown Cleveland, did without a very pretty lighthouse for more than 60 years. The small city’s original lighthouse, which was octagonal and made of cast iron in 1877, had been found unstable and was dismantled and replaced by a skeletal 18-foot tower in 1929.

This town, where historic white houses trimmed in green or black line lagoons, prides itself on its looks. Residents raised funds to replace the lighthouse, and in 1991 erected a 16-foot, cast-iron, white-and-red replica of the original on parkland above the Main Street Beach. Like its predecessor, the 25,000-pound copy was fabricated by a company in Buffalo, New York. A fifth-order Fresnel lens emits a steady red beam that is visible for 10 miles. There is no inside access.

After the replica’s construction, the town learned that the original lighthouse had been rebuilt on Lake Ontario in 1935 and renamed the East Charity Shoal Lighthouse. It marked the entrance to the St. Lawrence River until 2008. 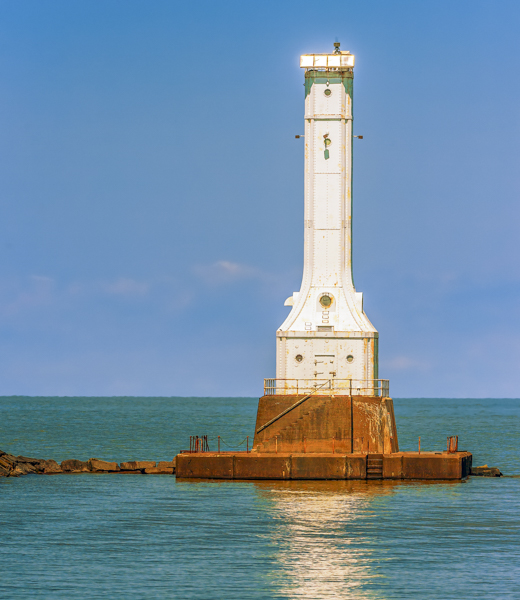 The Huron Harbor Lighthouse guards the entrance to the Huron River. | Photo by Vadim/stock.adobe.com

In the small city of Huron, this impressive art moderne–style lighthouse is about three-quarters of a mile offshore at the end of a fishing pier.

Built in 1939 to replace 2 earlier beacons, it was one of the first Lake Erie lighthouses to operate an electric beacon. Now solar powered, its light can be seen for more than a dozen miles. Upon the removal of its original lantern room, it’s now 72 feet high, and sits atop a 10-foot concrete pedestal.

The surrounding area offers great views of recreational and commercial boats going in and out of the Huron River and of lake birds flying overhead. Heed the posted signs and resist the temptation to venture closer to the lighthouse on a path of big boulders.

A sister lighthouse is located about 120 miles to the northeast in the town of Conneaut, Ohio. 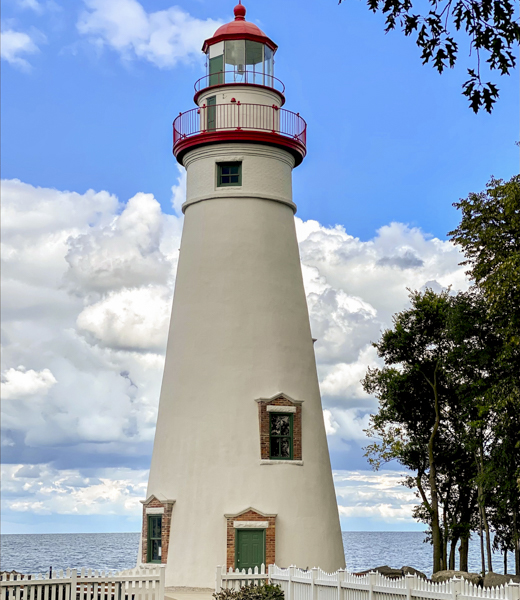 The deck at the Marblehead Lighthouse is open to visitors from Memorial Day weekend to Labor Day. | Photo by Sue Hartman

Built in 1821 and first lit in June 1822, the jewel of the Lake Erie lighthouses is the oldest continuously operating lighthouse on the Great Lakes and is one of Ohio’s most photographed landmarks. The 65-foot lighthouse appeared on a U.S. postage stamp in 1995, and is located in what is now a state park.

Revolutionary War veteran Benajah Wolcott served as the first lightkeeper. Upon his death in 1832, his wife, Rachel, became the first female lightkeeper on the Great Lakes. The Coast Guard still operates the beacon, which was automated in 1958. Originally fueled by whale oil, the light cycled through lard, kerosene, and incandescent electric prior to its current use of green LEDs that flash every 6 seconds to emit a beam visible for 11 nautical miles.

The grounds are open year-round. The 77 steps to the top of the lighthouse are open from Memorial Day weekend to Labor Day. A seasonal museum and gift shop occupies the renovated lightkeepers’ house, where you may view the original 3½-order Fresnel lens. A replica of an 1876 lifesaving station is also on-site. The Marblehead Lighthouse Historical Society operates both museums.

Tip: Get a special Marblehead Lighthouse Bicentennial postmark on a first-class letter or postcard at the Lakeside Marblehead post office. 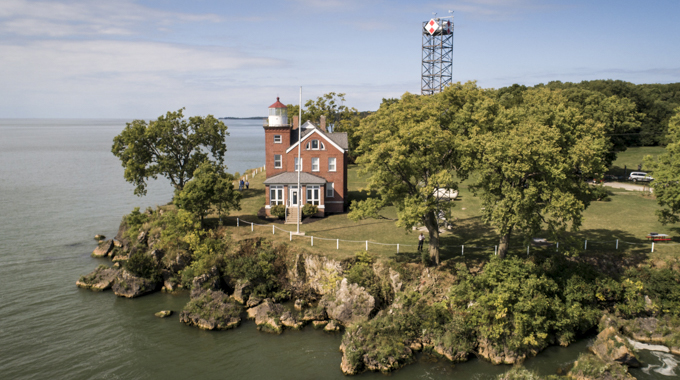 A ferry ride to the popular summer tourist village of Put-in-Bay is required to view the 1897 brick, Queen Anne-style brick lighthouse, the only lighthouse in the U.S. owned by a university (Ohio State). Park on Catawba Island at the end of State Route 53 and take the 18-minute trip.

Put-in-Bay’s more famous attraction is the Perry’s Victory and International Peace Memorial, a 352-foot Doric column honoring those who fought in the Battle of Lake Erie during the War of 1812. The lighthouse is about 3 miles away on the island’s far southern end. Researchers sometimes stay in the 2½-story red-brick house, with its 45-foot light tower in one corner. The light was deactivated in 1962, when an automated electric light atop a steel tower replaced it.

Tours are offered occasionally in the summer; the grounds are open daily. To see the original fourth-order Fresnel lens, visit the Lake Erie Islands Historical Society Museum in Put-in-Bay. 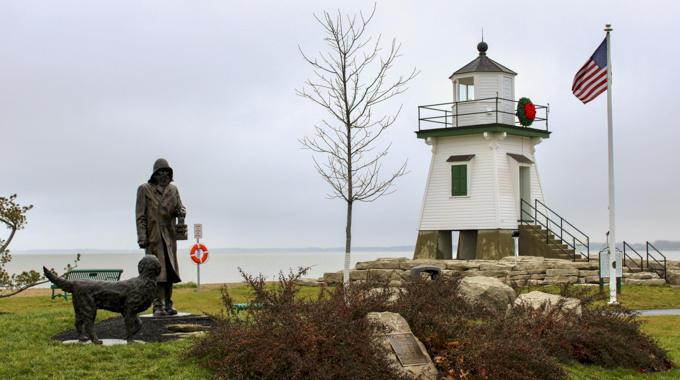 The renovated Port Clinton Lighthouse is the centerpiece of a lakefront park. | Photo by Fran Golden

In the small city of Port Clinton, the self-proclaimed “Walleye Capital of the World,” this 1896 wooden, pepperpot-style lighthouse did not open to the public until 2016. The U.S. Coast Guard decommissioned it in the late 1920s, and it was moved to private property in 1952. When the city acquired the structure’s remains in 2011, the newly formed Port Clinton Lighthouse Conservancy sprang into action, raising funds and renovating the lighthouse, which they moved to a waterfront park.

The 36-foot tall, 2-story lighthouse is believed to be the last remaining timber-frame lighthouse on Lake Erie and 1 of only 4 on the U.S. side of the Great Lakes. The re-created lightkeepers’ boathouse doubles as a gift shop and museum.

The grounds are open year-round. From Memorial Day to Labor Day weekends, Saturday afternoon docent tours get you inside the cozy first-floor storage room and upstairs lantern room, which houses a fifth-order Fresnel lens. Vintage items such as a kerosene oil lamp are also displayed. 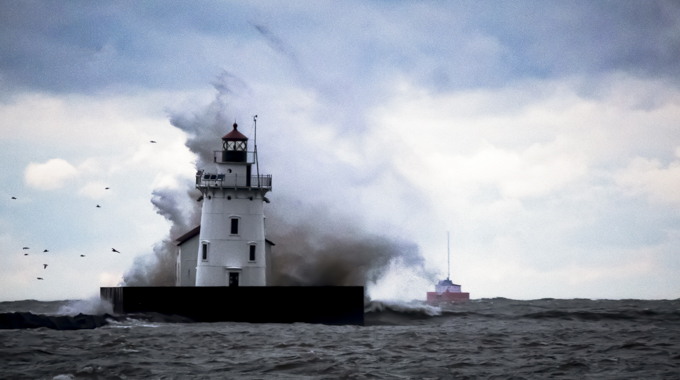 If you begin your lighthouse tour in Cleveland, start with a historic pair offshore that were built in 1911 at the entrance to the Cuyahoga River. The most famous of the two is the West Pierhead Lighthouse, a conical, 50-foot cast-iron tower attached to a fog signal building, which a 2010 photo depicted as completely covered in ice and looking like a ghostly castle in the lake. The Coast Guard has been trying to divest itself of the lighthouse, most recently offering it to interested nonprofits and other agencies. The round, cast-iron East Breakwater Lighthouse is already privately owned. An easy viewing spot for both is from the lakefront Great Lakes Science Center, which displays West Pierhead’s fourth-order Fresnel lens (removed in 1995) along with other Lake Erie maritime artifacts.

Add another lighthouse to your list if your Lake Erie exploration includes the giant roller coasters at Sandusky’s Cedar Point amusement park. The park’s Lighthouse Point cottage and RV development houses a restored 38-foot limestone lighthouse built in 1862 on Sandusky Bay (across the water from the Marblehead Lighthouse). The light tower tops a 6-room lightkeepers’ cottage (there’s no inside access).

Cleveland-based Fran Golden is an award-winning travel journalist whose work regularly appears in such leading publications as Bloomberg and Travel + Leisure. She is the author of numerous cruise and travel books, including 100 Things to Do in Alaska Before You Die (Reedy Press).

6 New England lighthouses where you can spend the night