6 wonderful ways to enjoy a weekend in Oberlin

Tucked away in rural northern Ohio and surrounded by farmland, Oberlin may not seem like the kind of place you’d visit for an impressive arts scene or to see a Frank Lloyd Wright house, much less to learn about what some historians call “the town that started the Civil War.”

Located about 35 miles southwest of Cleveland and home to about 8,200 people, the bucolic little city was founded in 1833 as a Christian Perfectionist community. Early community members had to pledge to live plainly and think deeply.

Oberlin College, a small liberal arts college with a renowned music conservatory, was founded the same year as the town. From early on, the college led the way in opening its doors to women and African Americans. The city also played an important role in the abolition movement and the Underground Railroad.

In addition to its deep history, Oberlin is a delightful place to visit for a weekend. Here are 6 places to explore. 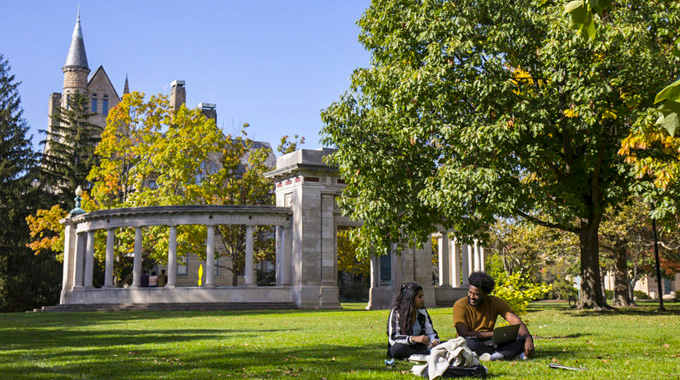 Tappan Square is where the town meets the Oberlin College campus. | Photo by Yvonne Gay

Ground Zero in Oberlin is Tappan Square, where the town and college campus meet. The 13-acre public park, designed by Frederick Law Olmsted Jr. and John Charles Olmsted, opened in 1885 and is listed on the National Register of Historic Places, along with dozens of other sites in town. It’s named for a leading businessman and abolitionist, Arthur Tappan (1786–1865).

The park has only two structures: a bandstand and an elaborate memorial arch. The 1902 arch honors the 13 missionaries and 5 children who lost their lives in the 1900 Boxer uprising in China.

Walk pathways under a canopy of beech and other mature trees while keeping an eye out for the park’s resident white squirrels. When the college is in session, you may hear music drifting from the conservatory (home to 500 concerts each year) or encounter students relaxing and sometimes marching or protesting. Free thought is very much encouraged in Oberlin. 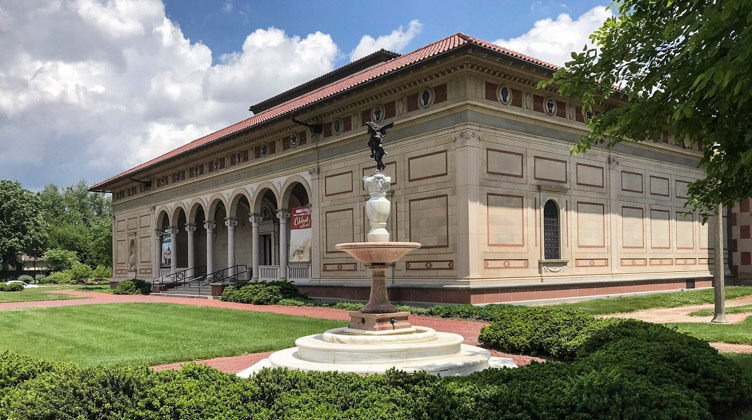 Admission is free to the Allen Memorial Art Museum. | Photo by Megan Harding

Across North Main Street from the square is one of the country’s best academic art museums, the acclaimed Allen Memorial Art Museum. The museum has frequent temporary exhibitions and a permanent collection of more than 15,000 works that range from ancient to contemporary.

Collection highlights include View of Venice: The Ducal Palace, Dogana, and Part of San Giorgio by J.M.W. Turner, as well as collections of African and Asian art. Cézanne, Monet, and Picasso are also represented.

The impressive 1917 building was inspired by several architectural styles, including neoclassical and Gothic. Admission to the museum is free.

3. Bench by the Road

In a landscaped area north of the art museum at the corner of East Lorain and North Main streets, you’ll find a steel bench that’s part of the Bench by the Road Project, launched by the Toni Morrison Society to honor the Nobel Laureate novelist (who was raised in nearby Lorain) and to pay tribute to enslaved people along the Underground Railroad—in this case, those who sought refuge in Oberlin. 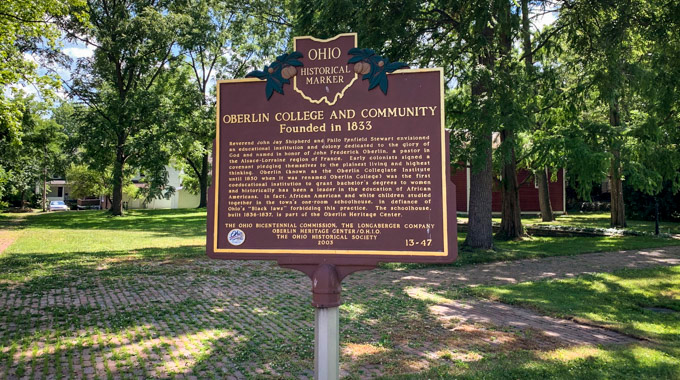 Oberlin played an important role in the abolition movement and the Underground Railroad. | Photo by Fran Golden

A block from downtown, the Oberlin Heritage Center helps explain the town’s history and its role in abolishing slavery. Guided tours are available with advance registration, or you can use a tablet for a self-guided tour.

You’ll learn about the 1858 Oberlin-Wellington Rescue, when a large crowd of townspeople marched 9 miles to Wellington, Ohio, to rescue John Price, who escaped slavery but was lured out of Oberlin by slave hunters who planned to return him to Kentucky. Price got away. Indictments and trials for some of his rescuers drew national attention, furthering the debate over slavery as the prospect of civil war increased. 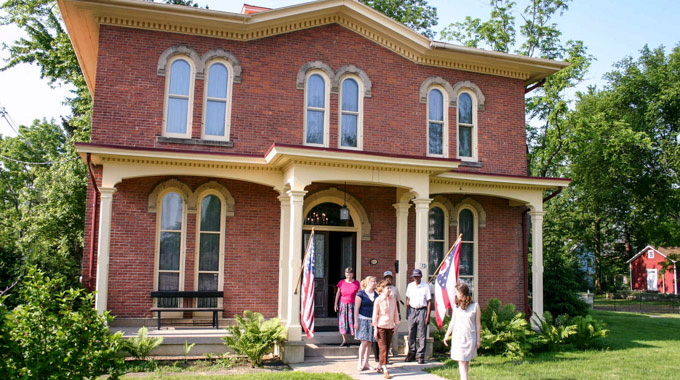 Tours begin at the 1866 Monroe House, once home to history’s other James Monroe, Oberlin’s best-known politician and abolitionist who served as a U.S. congressman from 1871 to 1881. Tours also include the single-room Little Red Schoolhouse, built in 1836 and, like Oberlin, interracial from its inception.

Stop by the 1884 Jewett House for an exhibit that re-creates inventor and Oberlin College student Charles Martin Hall’s 1886 woodshed experiment to develop an inexpensive way to produce aluminum (he later was a founder of ALCOA, the Aluminum Company of America).

Read more: These Midwestern presidential homes and museums celebrate some of our nation’s greatest leaders

Owned by Oberlin College and managed by the Allen Memorial Art Museum, the Weltzheimer/Johnson House is one of the few Frank Lloyd Wright Usonian homes that’s open to the public—in this case, the first Sunday of each month, from April through November.

Wright developed his Usonian homes (the name was a play on the United States of America) to be affordable to the middle class, and he designed this house in 1947, when he was 80 years old.

To cut costs, he eliminated nonessentials such as a basement and an attic, used poured concrete for the floors, and selected redwood over his usual cypress for the exterior and interior walls. Located at the back of a large narrow lot, the house has many big windows overlooking the landscape. There’s also a small bedroom with a mitered glass corner window, the brainchild of the room’s original 13-year-old occupant.

Put dust covers over your shoes and explore the L-shaped house, one wing with a great room and kitchen, the other with 4 bedrooms accessed off a long hall lined with bookshelves. The house also impresses from the outside: Wooden croquet balls decorate its flat roof and cantilevered carport.

Subsequent owners altered the house until Ellen H. Johnson, an art history professor at Oberlin College, purchased it in 1968. She enlisted students and local contractors to restore the house and later bequeathed it to the college.

Every college town has a preferred hangout spot. In Oberlin, it’s The Feve. Located in a historic building with a tin ceiling, The Feve attracts students, professors, and locals with its hamburgers, tater tots, and selection of 14 brews and ciders on tap.

Get there early for the popular weekend brunch and watch the sleepy-eyed college kids drift in for the pancake specials that change monthly and brunch burgers topped with bacon and egg. 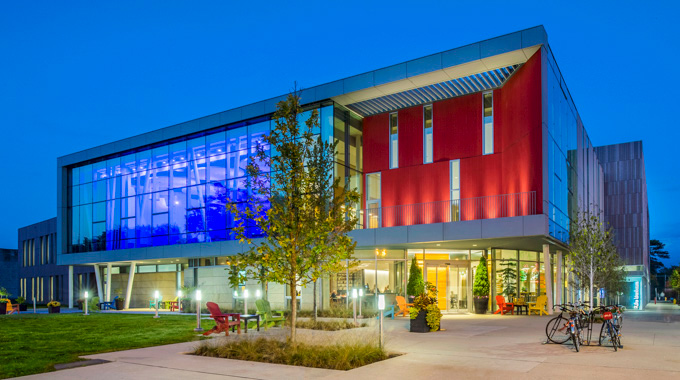 Owned by the college, the contemporary 70-room Hotel at Oberlin opened in 2016 as a groundbreaking property in terms of sustainability, using resources that include solar and geothermal energy. The hotel’s restaurant, 1833, serves a locavore menu that promotes Ohio farms, breweries, and wineries. Rates start at $190; dogs are welcome for $75 per stay.

The Fiddlehead Fern historic B&B occupies a brick mansion built in 1880 with 6 fireplaces and many original details. The 3 suites feature antiques, artisan-built beds, and private baths, and the fourth room is a more casual space that’s perfect for families. Rates start at $140 and include a full breakfast.

At The Wellington Country Inn, about 9 miles from Oberlin, the 4 guestrooms in this brick Victorian house are named for U.S. presidents (Washington, Lincoln, Roosevelt, and Truman). They each have private baths (Roosevelt has an ADA-compliant shower) and are decorated with antiques. Rates start at $99; breakfast is included.

Cleveland-based Fran Golden is an award-winning travel journalist whose work regularly appears in such leading publications as Bloomberg and Travel and Leisure. She is the author of numerous cruise and travel books including 100 Things to Do in Alaska Before You Die.