New Mexicans who want to venture into the great outdoors are wildly fortunate. The Land of Enchantment has an embarrassment of wide-open riches, including 35 state parks, five national forests, two national parks, three national historical parks, and 13 national monuments. And because of the pandemic, locals have many New Mexico parks all to themselves for now; New Mexicans just need to show proof of residency. Here are our top 6 outdoor treasures to visit this spring. 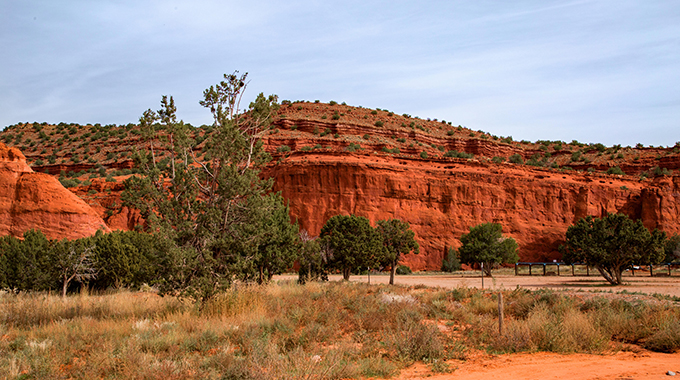 Drive along the Jemez Mountain Trail National Scenic Byway, through the artsy town of Jemez Springs, and you’ll be greeted by red cliffs aglow against a dark-blue sky as onyx ravens drift below billowing clouds. Whiptails dart between sienna-and-umber rabbitbrush and snakeweed, and emerald piñon and juniper clusters cast crisp shadows across the Pueblo of Jemez’s Red Rock Canyon Trail. Previously open only to tribal members, this 1.5-mile trail is now accessible to all who sign in across the road (NM 4) at the Pueblo of Jemez Welcome Center (formerly the Walatowa Visitors Center). Folks can go on a self-guided hike to explore Red Rock Canyon’s geology, ecology, and cultural significance, as well as Jemez Pueblo history and cuisine. Try traditional food, such as fry bread, for sale near the trailhead or head to the Welcome Center to shop for local pottery and jewelry or to find out more about Jemez culture. —Steve Larese 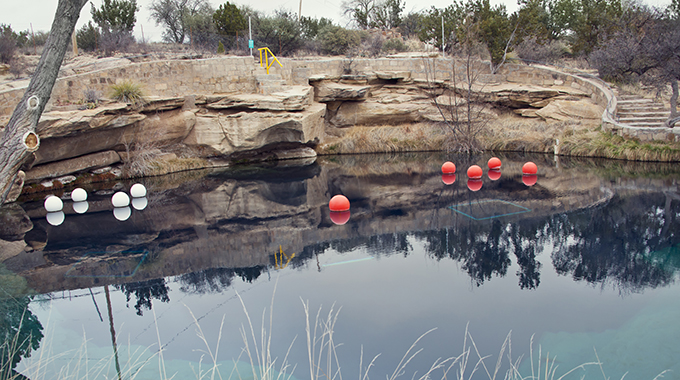 Scuba dive at the Blue Hole on Route 66 in Santa Rosa. | Photo by SunnyS/stock.adobe.com

Windsurfing, sailing, and kayaking may be the furthest things from your mind when you’re driving through the desert on Route 66. But around 7 miles north of the Mother Road, you can participate in all of these aquatic activities at triangular Santa Rosa Lake, a refreshing reservoir at Santa Rosa Lake State Park. In addition, equestrians and hikers can enjoy miles of shoreline trails, and birders will marvel at the diversity of avian species that call the lake home or use it as a migratory rest stop. Anglers can toss out a line. And at night, stargazers can take in the Milky Way’s spread over the water.

Around 10 miles south of Santa Rosa Lake, Park Lake typically features a floating playground, pedal boats, and a large slide in the summer. (Note: At press time, water activities have been postponed due to COVID.) Trek half a mile from Park Lake to Blue Hole, where you can see scuba divers hone their skills in this crystal-clear, 80-foot cenote. Reservations for scuba diving required. —Steve Larese 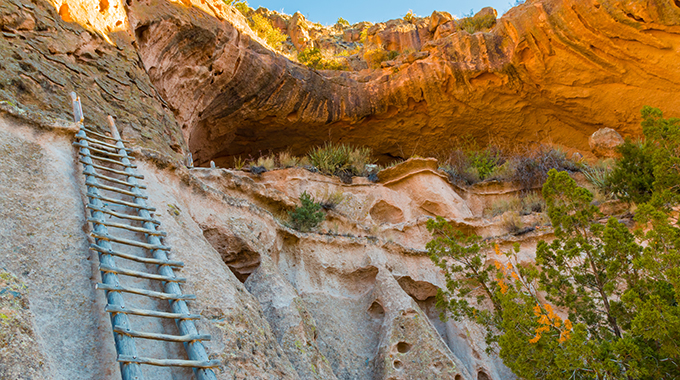 Climb the ladder leading up to the Alcove House at the Bandelier National Monument. | Photo by Billy McDonald

Located near Los Alamos, the 33,000-acre Bandelier National Monument was once home to Ancestral Puebloans. Today, it’s where you’ll find one of New Mexico’s most rewarding hikes. At 2.2 miles round-trip, the Pueblo Loop Trail (a.k.a. The Main Loop Trail) to Alcove House is short, but it’s not easy. The trail first leads to the rugged ruins of Tyuonyi Pueblo at the Frijoles Canyon on the Parajito Plateau. Archaeologists estimate that at the pueblo’s peak between 1350 and 1550, this circular structure was home to 400 people and was at least two stories tall with 400 rooms. Scholars believe it to be closely linked to nearby modern pueblos, including Cochiti.

Past the ruins, you can climb to the talus houses that were in part carved out of the volcanic tuff (consolidated ash hardened into soft rock). But it’s the Alcove House that offers the most adventure—while requiring a serious workout. Hikers must climb 140 feet using four wooden ladders and stone steps to reach the top at about 6,300 feet altitude. If the climb doesn’t take your breath away, the view will. The reconstructed kiva, or underground ceremonial chamber, makes for a photogenic foreground (visitors are no longer permitted to enter it). —Steve Larese 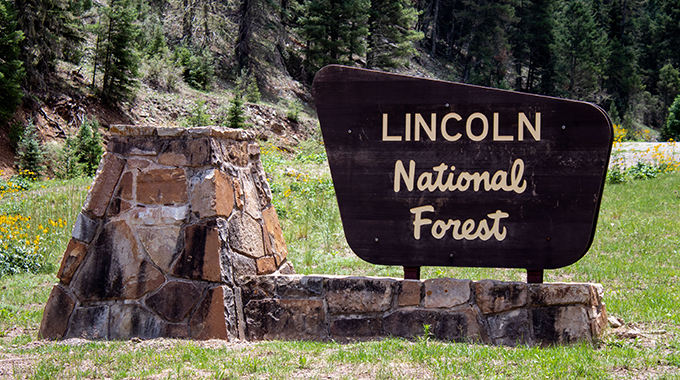 Abraham Lincoln never set foot in New Mexico, but he had a big impact on the state. In 1862, he signed legislation that aided the settlement of New Mexico, including the Homestead Act and the Pacific Railway Act, which led to the second transcontinental railroad. Today, New Mexico has a city, a county, and a national forest named in Lincoln’s honor. Established in 1902, Lincoln National Forest covers more than a million acres in the south-central part of the state. There are many campsites available (check website for details). Adjacent to the Sleepy Grass Campground, the La Pasada Encantada Trail is an easy 0.4-mile trail that was designed for the visually impaired, with signs in Braille and its path bordered by railroad ties. East of Alamogordo at the Sacramento Ranger District in Cloudcroft, the designated trails at Upper Karr Recreation Area are perfect for mountain biking and hiking. —Paul Zieke 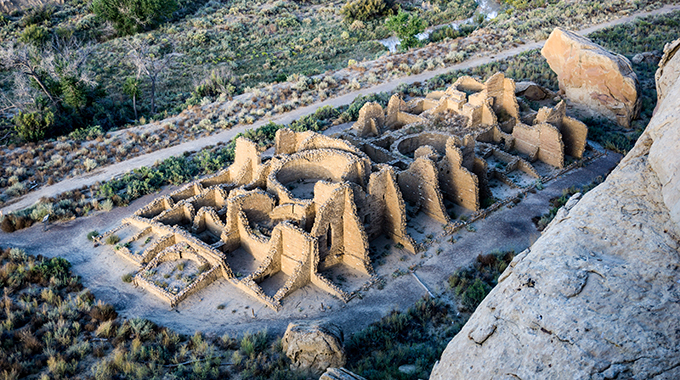 Chaco Culture National Historical Park contains the largest collection of ancestral pueblos in the Southwest, and one of the best ways to explore the pueblos (called great houses) and the rugged landscape is by bike on three main bicycle trails. While the visitors center is currently closed, you can still pick up some informational brochures outside the center.

Take the 2-mile round-trip bike trek on the Peñasco Blanco Trail to see Casa Chiquita, a compact pueblo built into and atop a hillside. It features a nearly square block of rooms surrounding an elevated kiva. From there, park your bike at the racks and hike on the 7.4-mile round-trip trail to Peñasco Blanco (about a five- to seven-hour trek), where you’ll find Pueblo and Navajo petroglyphs. The 9-mile Canyon Loop Drive is a round-trip paved loop, open to cars and bikes, that leads to the Una Vida, Hungo Pavi, Pueblo Bonito, Chetro Ketl, Pueblo del Arroyo, and Casa Rinconada pueblos. Along the trail, you’ll find racks to stow bikes so you can explore on foot the distinctive architecture, petroglyphs (at Una Vida), and fossils.

Near the campground (currently closed due to COVID-19) and off the loop, you can also access the easy Wijiji Trail, which is about 3 miles round-trip. The most strenuous of the area’s bike treks is Kin Klizhin Trail. The 24-mile round-trip, two-track dirt road traverses rolling hills to reach this Chacoan great house community, which some archaeologists believe was a ceremonial and civic center. Along the way, riders will see the Pueblo Alto atop a north rim mesa as well as evidence of ancient roads leading to Chaco. —Steve Larese 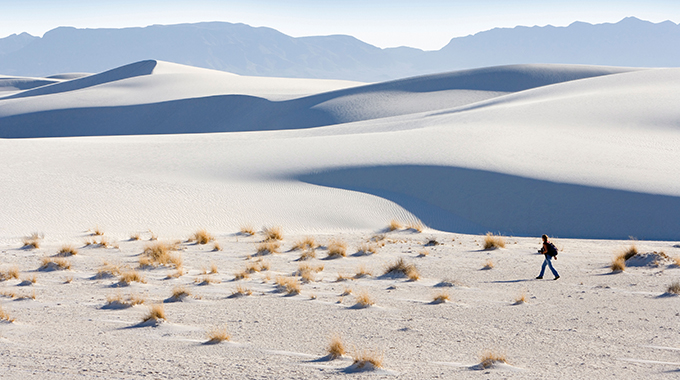 You can spot the white sands from US Route 70 in southern New Mexico. But to really appreciate their grandeur, turn off the highway and follow Dune Drive into the park. Soon, you’ll be surrounded by undulating dunes so white they could pass for snow. For recent visitors, this otherworldly landscape has been a welcome escape during the pandemic. Like many places, White Sands shut down in March 2020—only three months after the national monument was redesignated a national park. Soon after it reopened in June, visitors began streaming back in.

“Public lands are still a place where people can responsibly recreate,” park ranger Kelly Carroll said late last year. “People have been enjoying the dunes. They’ve been sledding, picnicking, and taking walks. All the hiking trails have been open.” Carroll has particularly enjoyed hiking the park’s 2-mile backcountry loop trail for the unique perspective it offers on the rolling dunes. “It’s a magical place,” he said. —Jim Benning