Near Santa Fe, discover a hidden treasure trove of petroglyphs

Hikers can find more than 4,000 ancient rock art on a 1-mile trail at the La Cieneguilla Petroglyph Site.

A conspiracy of ravens circled overhead—omens, perhaps, of the ancient birds I was about to encounter. Dutifully following the white arrows on shin-high trail markers, I traced a flat path that soon turned right and climbed a short, sharp hill. Above me, black cliffs looked out on the Santa Fe River Valley and held on to one of the City Different’s best-kept secrets: a treasure trove of more than 4,000 petroglyphs in a short 1-mile stretch.

Just west of Santa Fe, La Cieneguilla Petroglyph Site offers a burst of Puebloan rock art, along with a chance to stretch your legs for an hour or two on a moderately challenging trail. I got there early enough in the morning to have that trail to myself, at least for a bit. Panting once I reached the basalt layer capping the mesa, I turned to catch a view of the river. Instead, the pecked-out outline of a magnificent bird stopped me cold.

One of my ravens? A mythical knife wing? No one really knows. Petroglyphs shield their meanings in centuries of tradition passed down by elders to the young. Theories abound, but answers are elusive. The outsider’s best option: Be still, and let the voices of the past come to you in silence.

Threading along the cliff trail, sometimes using both hands to negotiate boulders, I pondered an array of kokopelli-like flute players. Birds and frogs. A six-fingered hand. Spirals and stair steps. Fearsome warriors. Enough snakes to keep me wary with each step.

Petroglyphs for miles in any direction

The trail is moderately challenging.

Gary Hein, a retired “computer geek,” has been exploring the area for the past 14 years along with researchers and preservationists. Cieneguilla is one of 24 locations under the Galisteo Basin Archaeological Site’s umbrella, and the trail portion represents just a smidgen of rock art that stretches for miles in both directions, much of it on private lands fenced off to visitors.

Within the mile that is open to the public, Hein says, hold on to your hiking hat. “You’ll see deer, buffalo, dogs, coyotes, tadpoles, birds, faces,” he says. “As you’re walking along the trail, there are no glyphs. Then you see one or two. They become dense in little alcoves, then drop off. Occasionally, they run along a flat wall.”

The Bureau of Land Management oversees the area, which showcases a flowering of pueblo life from the post-Chacoan 1300s up to the 1680 Pueblo Revolt. La Cieneguilla Pueblo sprawled along the river flats until its abandonment after the uprising against the Spanish colonists. Its residents fled to farther pueblos, leaving behind the physical record of how they related to the cosmos.

I stop at a rock covered in images—birds, a person, and an array of what seem to be mere squiggles. If someone took the time to hit rock on rock until a design emerged, then surely this collage must be saying something to someone.

“My pet theory, with no basis in anything, is that in the winter, the earth goes to sleep, and she’s not going to mind you beating on her skin to make images,” Hein says. “In those alcoves, it gets warm in the winter. So while you’re making them, you’re doing the other thing you can do in winter: tell stories. They’re making rock art to tell the stories so their culture gets passed on to the kids.” 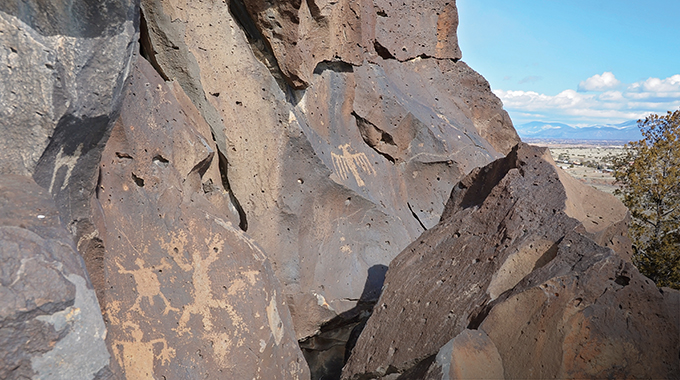 The petroglyphs are wonderful to view, but don't touch or harm them in any way.

As for all those snakes, he adds, “If you look at the ground level, you’ll probably find some holes. It may be where they’re denning.

Hein’s favorite way to tackle the site is to stay on the trail below the top until the petroglyphs peter out. Find the nearest way to scramble to the top, then walk along it until you hit the private-property fence line. Crawl down to the trail, then work your way back.

And don’t forget the slope, he says. “There’s not as many and the petroglyphs are not as spectacular, and you have to work harder to see them.”

At one time, nearby residents have told him, they found petroglyphs scattered along the ground almost every place a person could set a foot down. Those days are gone. Today, preservationists pit their evolving field of knowledge against vandals, weather, new roads, and a growing community. One boulder with a lineup of flute players bears bullet-sized holes. Cautions are posted at the trailhead: Don’t touch the petroglyphs, don’t make rubbings from them, don’t climb on them, don’t harm them in any other way.

I don’t. I take my time and marvel at a two-sided image crafted from the jutting angles of a boulder. It could be a supernatural being, but I see a bear, a symbol of power and strength. I breathe it in and carry the sense of it down the trail and home. 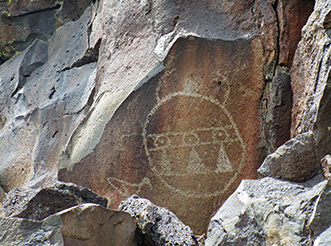 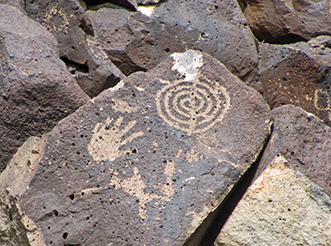 Some consider people with six fingers to possess special powers. Spirals may represent a journey or a kind of calendar. 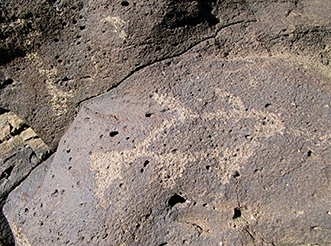 Rare in desert petroglyphs, fish were a delicacy in the Puebloan’s diet.

Tadpoles and frogs may represent fertility, transformation, or the return of water. 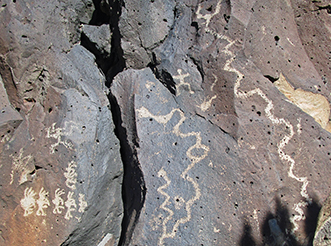 Humpbacked flute players may be a fertility deity. The horned snake is Avanyu, a water deity.

Is it an otherworldly being who is giving birth to another magical being? Could it be abstract art or an alien?

The site is 14 miles southwest of Santa Fe. From New Mexico Route 599, take Airport Road west for 3.4 miles to a parking area with a BLM sign. To see the most petroglyphs, take the trail to the left. 575-758-8851; blm.gov/visit/la-cienequilla-petroglyphs.

Kate Nelson is an award-winning journalist, author of the biography Helen Hardin: A Straight Line Curved, and an avid hiker in Placitas, New Mexico.