A hiker meets his match deep in the heart of the Rio Grande Gorge.

We lock eyes at once. And what eyes they are. Sable snow globes with Audrey Hepburn eyelashes. Is this to be my blind date? Please, please, please.

I approach with five others who are with me on this venture—Kevin, Bonnie, Jenny, Kearny, and Joanie—all of whom, like me, are seeking special companions this afternoon. Greeting us is Stuart Wilde, our genial guide and matchmaker for the day, sporting a smile and goatee under his bush hat. Beyond him is the 800-foot-deep Rio Grande Gorge—New Mexico’s Grand Canyon—down into which we will shortly descend.

Our six dates eyeball us with unexpected boldness. I’m astonished at how poised they are with their swan-like necks and elegant postures. Considering they’re male. 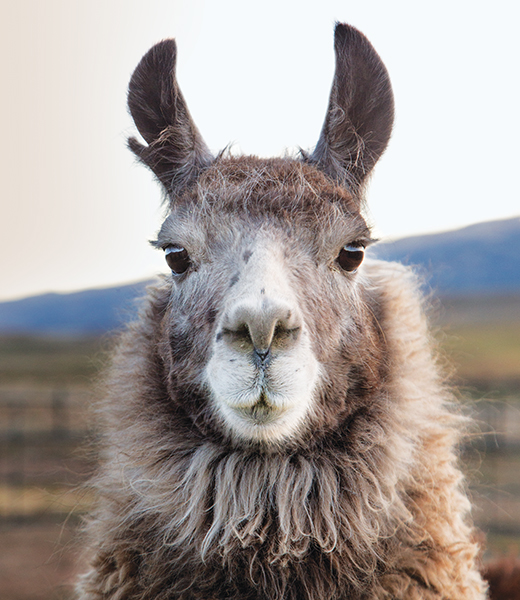 Raja is part of the Wild Earth Llama Adventures pack.

“From my experience,” Stuart says, “it’s best if mild-mannered pairs trek together and type A’s stay with type A’s. If not, there could be trouble.”

“Trouble? What sort of—”

He assigns me to Rio, the one whose eyes locked onto mine. Bible black, he’s got poofy hair and can’t stop looking at me. Deeply. It’s not love, Stuart says. It’s his guardian instinct. A llama’s height, inquisitive stare, and protective nature fluster predators more effectively than most other livestock guard animals.

As I rub his neck, Rio continues to gaze at me, his adorable rabbit-like ears twitching at my every movement, his wet camel-like nose wiggling, his mellow eyes drinking me in. Is he infatuated or taking my measure? No first date ever paid me this much attention, although I always wished they did. Now I’m grateful they didn’t. Rio is starting to weird me out.

I consider telling Stuart that my llama’s making me self-conscious until I recall that this notion goes against all known research. Llamas are used as therapy animals for disabled children, and their expressive eyes have helped autistic youngsters make their first sustained eye contact.

“Move out,” Stuart directs, and we set off. 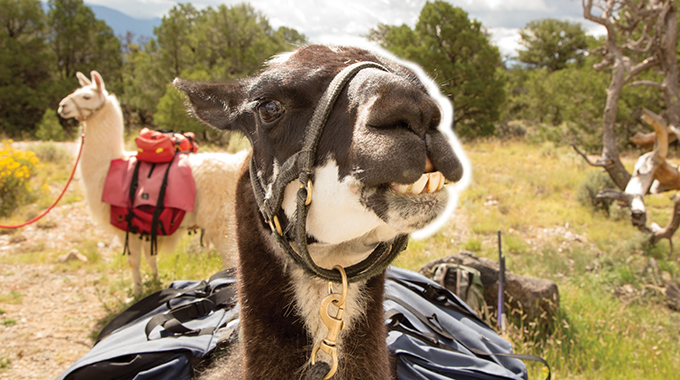 Formed by millions of years of melting glaciers, earthquakes, volcanoes, and lava flows, the Rio Grande Gorge is a malevolent-looking 50-mile-long cleave in the earth’s crust, stretching from the northern reaches of New Mexico near the Colorado border to southeast of Taos. It’s what the middle of California would look like if the San Andreas Fault ever triggers the Big One.

The trail is narrow and windy and crumbly, but as I hold on tight to Rio’s lead rope, he traverses the pathway with ease. These camelids are more tractable than donkeys, less stubborn than mules, not as skittish as horses, and nicer than camels, which is why they’ve been used as pack animals since pre-Hispanic times. 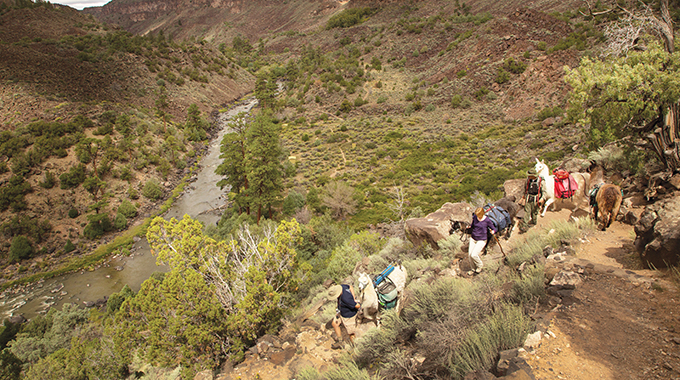 Llama provide support for hikers as they make their way along the narrow Rio Grande Gorge.

Fifteen minutes into our descent, our first casualty occurs. The yawning depth of the gorge is too much for Bonnie, a food-and-wine connoisseur. “How would I ever make it back up?” she pants.

As she treks back up the trail, Stuart hitches her llama to his, and we continue. He stops occasionally to let us taste medicinal plants, show us petroglyphs, and explain how he came to own his 40-llama ranch. “We rescue most of them,” he says. “They’re so cute and docile, people think they’d be great pets.”

Not so. You can’t run or play with them, you can’t ride them, and caring for them is expensive. So many llamas are abandoned. “By the time we get them, many are feral; some have been abused.”

Stuart rehabilitates the friendliest and healthiest animals and uses them for these treks. I can’t imagine anyone abandoning Rio. Just look at that adorable face. Yes, yes, I know. He’s starting to grow on me.

Doubling up on the trail 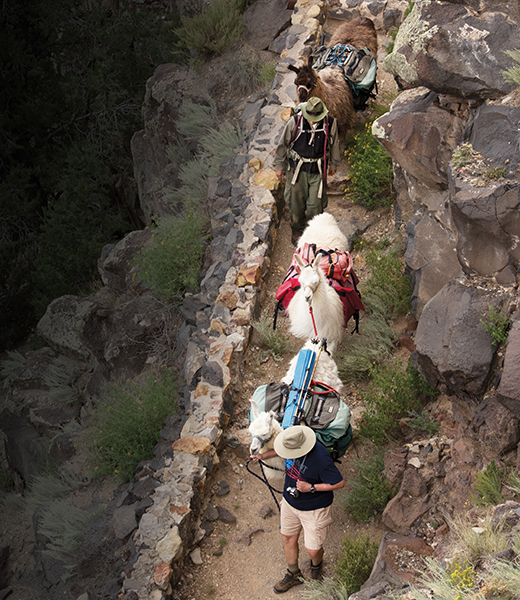 Llamas have been used as pack animals since pre-Hispanic times.

Ten minutes later, Kearny says no más. She’s lost her footing a few times, and her legs are trembling. As she heads back up, Stuart ties her llama, Diego, to mine. “Can you handle two?” he asks.

Rio groans as Diego immediately bumps and rams him, pushing the two of us forward. Diego is clearly more dominant than both Rio and me. I hear a sound, and something wet splats across the back of my shirt. Stuart told us that when llamas quarrel, spit happens. I look back, and Diego and Rio are glaring at each other, their necks inches apart, stretched out like furry accordions. Suddenly the two bolt past me, knocking me to the ground, and Rio’s rope slips out of my hand. They barrel down the trail like runaway Peruvian oxcarts.

Stuart, on the switchback below me, mutters “Uh-oh” and dashes up the path to intercept them before they ram into the rest of the pack train. Before he does, I manage to catch up with Rio and tug his rope. It doesn’t work. Then I remember Stuart’s advice: “Always stay in front of your llama.”

I scramble ahead of Rio and stop, and he instantly halts. Good boy. Diego stops as well. Stuart decides to give Diego to fellow trekker Kevin, a website owner, who’s larger and younger than me, and we’re off again.

Lunching with the llamas 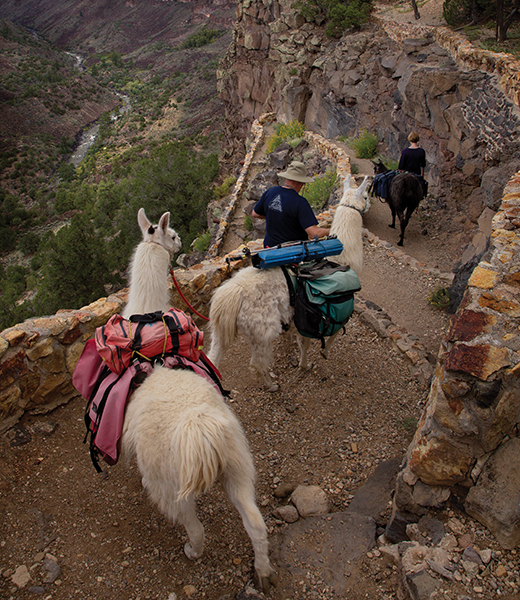 The trail is narrow and windy and crumbly.

At the foot of the gorge, Stuart prepares our lunch (provolone and ham sandwiches on artisan bread, green salad, potato salad, craisins, and raspberry Milano cookies) while we stretch out on black volcanic boulders beside a freshwater brook. It’s a spectacular spring day, hawks soar above us, and New Mexico’s fabled lambent sky dares my camera to capture its luminescence (it fails).

It’s time to return. We lost two trekkers going down. How will we fare scrambling back up? Ten minutes later, Kevin experiences breathing trouble and needs to walk at his own pace without a llama. Stuart rearranges the llamas again and removes two collapsible hiking poles from his pack. “You guys go ahead,” he instructs. “We’ll be right behind you.”

When we reach the top, we tie our llamas to Stuart’s truck and reunite with Bonnie and Kearny, who are both fine. Kevin and Stuart rejoin us shortly. As we thank Stuart for the one-of-a-kind adventure, he plunks a heavy sack of oats at our feet. “Thank them,” he nods toward the llamas. I bury my hands into the kernels and bring a pile over to Rio.

He’s waiting impatiently, ears pricked, looking at me shyly, as if to say, “Nooo, you didn’t.” I hold out his reward, and he digs into it with gusto.

Rio, I say to myself, I think this is the beginning of a beautiful friendship. 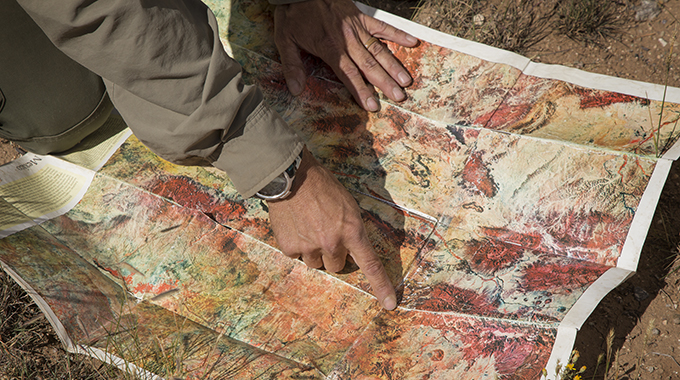 The breakfast dishes and stuffed sopaipillas are divine at Michael’s Kitchen, Restaurant, and Bakery ($7–$20). 575-758-4178. For dinner, try Doc Martin’s chile relleno platter or green chile cheeseburger, then wash it down with a margarita at the Historic Taos Inn (entrées, $15–$30). taosinn.com/doc-martins. At Lambert’s of Taos, don’t miss the roasted duck or the jamocha-almond sundae crafted from house-made ice cream. 575-758-1009.

John Wood is the author of How I Killed Off My Ex-Wife and Other Far-Flung Misadventures (Amazon Kindle, 2014).

AAA Travel alert: Several countries, states, and cities have implemented travel and business restrictions due to COVID-19. Prior to making any travel reservations, please ensure that hotels, attractions, and restaurants are open. The local tourism board is a good resource for updated information about your destination.