When Albuquerque’s Sawmill Market opened its doors in March 2020, it claimed the title as New Mexico’s first food hall. This is not the kind of food court that’s overflowing with fast-food fare and chain restaurants. Instead, like the famed Chelsea Market in New York City and Grand Central Market in Los Angeles, Sawmill features local and artisanal restaurants that run the culinary gamut from Italian to Venezuelan. After closing due to the COVID-19 pandemic, the food hall reopened in July, welcoming diners to a place that its developers say is transforming the Duke City dining scene as well as the surrounding neighborhood.

A few years ago, most visitors would never have suspected that a former lumber warehouse would become Albuquerque’s next foodie hot spot. The Sawmill District had been known for lumber production since the early 1900s. Thanks to the neighborhood’s easy access to a railroad spur, business boomed for much of the 20th century. In 1958, Paxton Lumber opened in the district as the “Home of Beautiful Woods.” It shuttered in 1999, and the warehouse joined the ranks of the neighborhood’s vacancies. In 2018, boutique hotel and hospitality company Heritage Hotels and Resorts began reimagining the building as an artisanal food hall. Heritage saw it as another chapter in the neighborhood’s redevelopment, which already included projects such as its own Hotel Albuquerque and Hotel Chaco.

The market’s two dozen, mostly culinary merchants show the breadth and depth of Albuquerque’s cuisine, from bean-to-bar treats at Eldora Chocolate to croissants at Blue Door Patisserie. Heritage Hotels and Resorts recruited Lauren and Jason Greene, owners of the Grove Café and Market, to curate Sawmill’s lineup. “We think the market has raised the bar of the food scene in Albuquerque,” Lauren Greene says.

The food hall opened with a mix of celebrated New Mexico chefs and relative newcomers, like the creators of craft grilled cheese sandwiches at NM Melt Company, po’boy specialists at Salty Catch SW, and the pulled pork aficionados behind 135º BBQ.

Here’s a look at some of the restaurateurs making it happen. 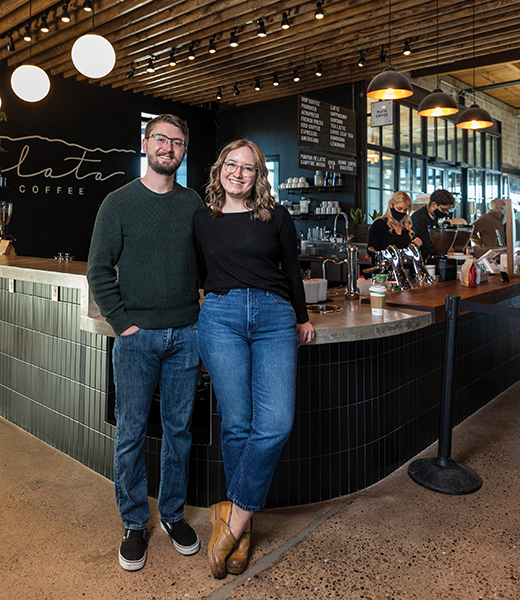 Plata Coffee was in business for only a year before relocating to Sawmill Market. Aaron Ketner and his business and life partner Rose Kerkmans opened the shop in 2018 to showcase New Mexico roasters. They saw moving to the market as a chance to expand their customer base. “The market is new and something different for Albuquerque,” Kerkmans says. “It’s attracting people from a lot of different parts of town, people who would normally just stay in their own neighborhoods.” 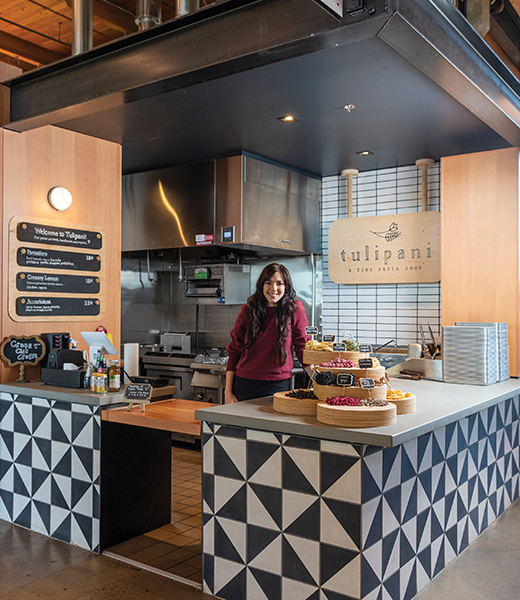 Alanna Casale, creator of Tulipani, sold at farmers markets for years before opening her first brick-and-mortar location. “The Sawmill Market has a communal feel, and I really wanted that,” says Casale, who is known for making pastas as colorful and flavorful as the produce that inspired them. She’s transformed her Italian grandmother’s plain recipes into creations like red chile casarecce and green chile linguine—entrées that delight customers with their smoky, piquant flavor. Tulipani also offers a small menu of made-to-order pasta dishes, such as the pomodoro, which is swimming in tomato-basil sauce.

HAWT Pizza co-owner Felicia Meyer took her signature pizza recipe from her backyard Weber grill to a mobile pizza kitchen before landing a permanent spot at the market. HAWT’s wood-fired pizza marries Neapolitan and New York styles with a thin-crust pie that’s heavy on the toppings, such as the Brooklyn Basement pizza with house-pickled jalapeño, pepperoni, and fresh mozzarella drizzled with chile-infused honey.

Ronsuelvic Cavalieri and her family at Cacho’s Bistro. | Photo by Gabriella Marks

Ronsuelvic Cavalieri built a following for her Venezuelan fare at Albuquerque’s Rail Yards Market before opening Cacho’s Bistro at the Sawmill Market. Cavalieri, the matriarch of the family business, worked in the food industry in her native Venezuela before immigrating to the U.S. in 2015 with her husband and sons. “We really like sharing our food and traditions,” Cavalieri says. Although it’s known for traditional cachitos (stuffed crescent rolls), the stand also serves gluten-free arepas and empanadas with New Mexican twists, such as the chicken, cheese, and green chile empanadas. 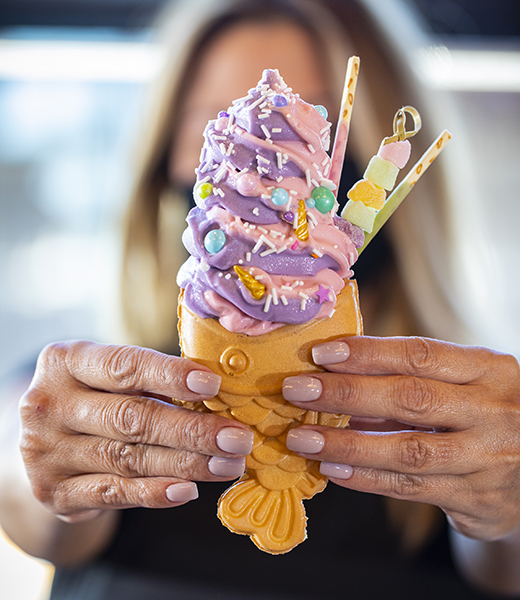 Albuquerque native Cuong Viet Troung, a.k.a. “Congo,” left his career as a respiratory therapist to launch Neko Neko. The Japanese taiyaki ice cream stand is the first of its kind in the city, and it’s one of the many Sawmill eateries expanding the diversity of dishes available in the state. Neko Neko’s eminently Instagrammable fish-shaped cones are filled with eye-catching soft-serve flavors such as purple taro and green matcha. 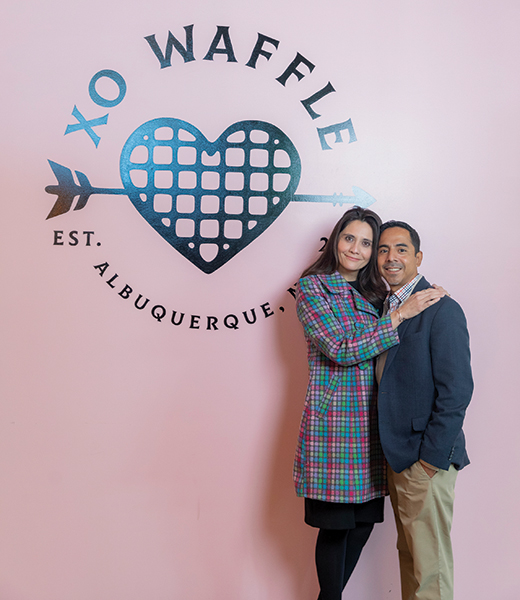 XO Waffle creators Ray and Cindy Campos became first-time entrepreneurs when they spotted an opening at the market. They brought Belgian liege waffles, which are popular in other big cities across the U.S., to Albuquerque. Leavened dough and pearl sugar, which gives the waffle its signature crust, lend the waffles an authentic taste. That said, their offerings aren’t entirely conventional. A chicken-and-waffle dish anchors the menu’s savory side.

Heritage Hotels and Resorts oversees a handful of restaurants in the hall. A glowing neon pink sign marks the way to Flora, a Mexican eatery that offers street tacos and a full slate of tequila- and mescal-based cocktails. A large vent hood decorated like the New Mexico state flag beckons diners into Red and Green, which serves chile-laden New Mexico classics. Mercantile Café and Mercantile Wine Bar offer light bites. Botanic Bar, housed in an indoor glass greenhouse, specializes in gin-based cocktails using house-made shrubs. Paxton’s, which keeps more than 40 New Mexico beers, wines, and ciders on tap, has been a breakout hit. The name reflects the building’s beginnings, showing that even as the market and neighborhood evolve they’re never far from their roots.

Ashley M. Biggers is a freelance journalist and author who specializes in travel, arts and culture, and wellness.