The 3-mile section of the Island Line Rail Trail that crosses Lake Champlain is a favorite among cyclists and walkers traveling between the greater Burlington area and South Hero Island. | Photo courtesy Lake Champlain Land Trust

There was a time—in the late 1800s—when the railroad was king. A network of tracks laced the nation, allowing for the efficient transport of passengers and goods across vast distances. But the eventual dominance of air and auto travel led to the abandonment of thousands of miles of rail beds. Fortunately, that downfall presaged the rise of rail trails, paths for human-powered locomotion. These transformed train corridors attract cyclists, joggers, dog walkers, hikers, sometimes horseback riders, and, when there’s enough snow, cross-country skiers. Each route—typically with a flat or gentle grade—provides a window into a region’s history while allowing people of all ages to exercise safely and get in touch with nature. These 6 rail trails showcase some of the best scenery in Northern New England. 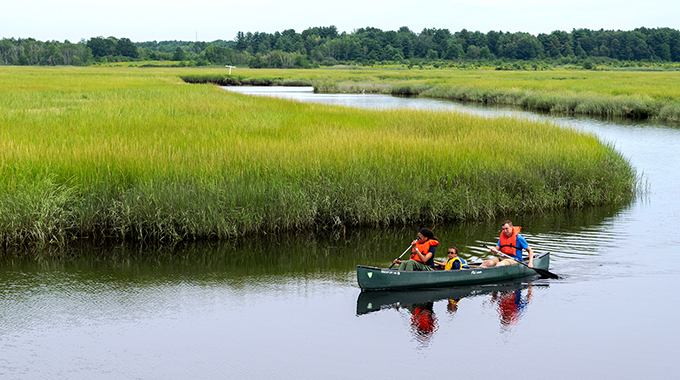 Take a break from cycling the Eastern Trail and kayak in Scarborough Marsh, Maine’s largest saltwater marsh, where you can spot numerous bird species, including little blue herons and snowy egrets. | Photo courtesy of Maine Audubon

Named for the first railroad to run between Boston and Portland, Maine, the 65-mile-long Eastern Trail uses about a third of the old rail corridor (the 24 miles from Kennebunk, an iconic New England coastal town, north to South Portland). For the best scenery (and to avoid gaps that force you to bike along busy city streets), pedal the section between Saco and Scarborough.

This atmospheric 7-mile journey rolls through Maine’s largest saltwater marsh, a bucolic wetland where you may notice great blue herons, snowy egrets, and other birds. Anglers can cast for striped bass throughout the marsh. A half-mile detour brings you to the Scarborough Marsh Audubon Center, where you can rent a kayak while learning about marsh ecology. If you feel like sticking your feet in the sand, another detour along Black Point Road offers access to the calm waters of Ferry Beach. 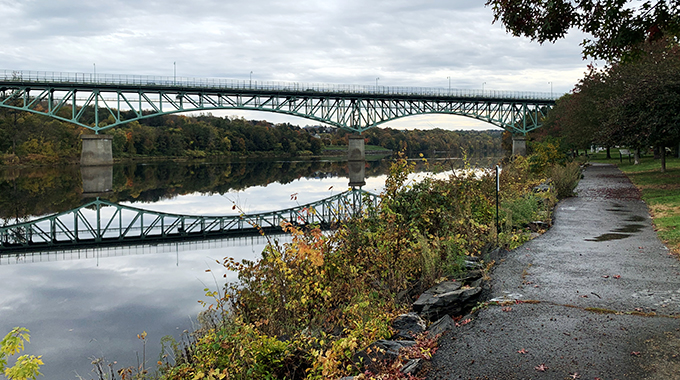 At the start of the Kennebec River Rail Trail in Augusta, Maine, cyclists ride under Memorial Bridge. | Photo by Earl Kingsbury

The Kennebec River Rail Trail may be short, not even 7 miles long, but this rail trail connecting Gardiner with Augusta, Maine’s capital, offers an intimate window into the area’s history and the Kennebec River’s evolution. Once polluted, this cleaned-up waterway now attracts Atlantic salmon and bald eagles.

Following the right-of-way of the old Kennebec and Portland Railroad that once connected Augusta with Portland, the wooded trail often hugs the river. You might spot leaping Atlantic sturgeon in Augusta’s Waterfront Park or in Hallowell’s Granite City Park, and Hallowell’s waterfront Adirondack chairs beckon visitors to sit and relax for a while.

It’s worth wandering Hallowell’s historic district, where numerous 19th-century buildings display Italianate and Romanesque architecture. Near the end of the trail, amble through Gardiner’s red-brick Historic District via a self-guided walking route with signs describing the city’s 250-year history.

Read more: Biking in New England: 3 scenic routes that will wow you 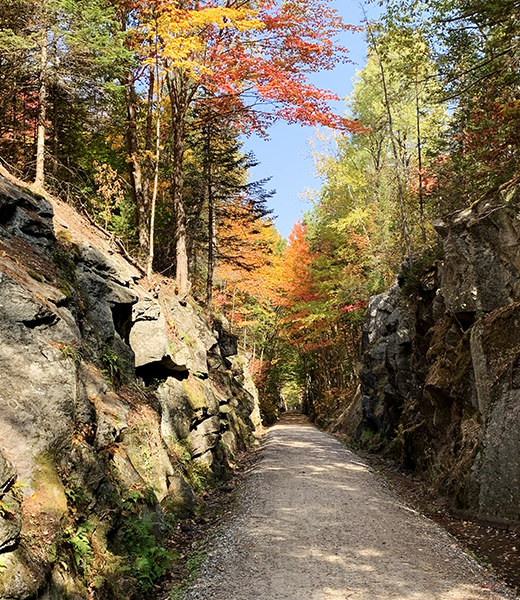 Along the Northern Rail Trail, this exposed rock represents the arduous hand drilling and blasting work done in the mid-1800s that allowed the railroad to navigate an easier route toward Lebanon. | Photo by Lindy Heim

Tracing a 59-mile-long route between Lebanon and Boscawen, this rail trail is built on the bed of the Northern, one of the state’s first railways. Along the path (with occasional short detours), numerous historical markers remind of times gone by, including those that recall the railroad’s past—white concrete posts inscribed with a black W indicate former whistle markers.

The trail passes Webster Lake, named for statesman Daniel Webster, who was born and lived nearby. A swath of sand along the lakeshore is perfect to picnic and swim. Not far from the trail, you can wander a restored Shaker village on foot and visit the Enfield Shaker Museum, devoted to the functional furniture emblematic of this Christian community. Railroad buffs gravitate to Potter Place, a well-preserved, 19th-century train station in Andover, complete with a station master’s office and ticket window. 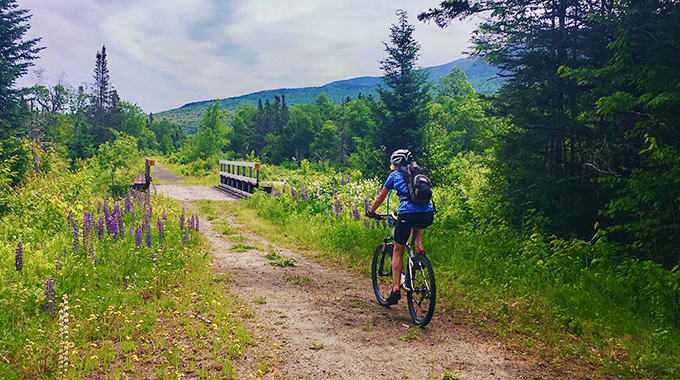 Navigating 19 miles from Whitefield to Gorham, the Presidential Rail Trail offers a quintessential New Hampshire vibe—lined with balsam fir, crossed by bubbling brooks, passing fields of wildflowers, and, of course, offering stellar views of rugged peaks. The path, mostly along the route of the old Boston & Maine Railroad, runs along the base of the Presidential Range, where Mount Madison and many other peaks are named for U.S. presidents.

Your starting point at Cherry Pond is part of the Pondicherry National Wildlife Refuge that’s blanketed with wetlands and ponds, making it a prime spot to spot loons, osprey, and other waterfowl. (The viewing platform provides stunning views of the Presidentials.) The journey feels remote: You may even spot a bear or a moose. Gorham, one of the only town centers you’ll pass near, is home to a renovated early 20th-century train station, converted to a railroad museum.

On Vermont’s Island Line Rail Trail, the American elms lining the Colchester Causeway don’t obstruct the stunning views cyclists will have as they pedal its 3-mile length. | Photo by Shirley Chevalier

Whether you prefer woodlands, beaches, waterfront parks, or marshes, the 13-mile Island Line Rail Trail—part of a rail corridor that once connected Lake Ontario with New England—has something for everyone, with numerous places to stop, stroll, bird-watch, fish, or just chill. North Beach, with its long stretches of sand, is especially lovely, as are the nearby forested paths at Rock Point.

Scenic Lake Champlain accompanies large portions of your ride from Burlington to Colchester and on to South Hero Island. In fact, the most breathtaking section of the journey is the 3-mile-long marble block causeway over the lake, with views of New York’s Adirondacks to the west and Vermont’s Green Mountains to the east. (Sunsets from this vantage point are spectacular.) Reaching the edge of South Hero requires hopping on the free Local Motion Bike Ferry (summers only; $10 suggested donation) that transits a 200-foot gap in the causeway that allows for boat traffic.

This underpass along the Lamoille Valley Rail Trail isn’t far from the trailhead. Also nearby, the vibrant town of St. Johnsbury has Vermont’s only public planetarium and an arts center that screens indie films. | Photo courtesy Lamoille Rail Trail Valley

Following a portion of the route of the St. Johnsbury and Lamoille County Railroad that once ran across northern Vermont, the Lamoille Valley Rail Trail is still a work in progress. Currently, a 44-mile portion is open in 3 sections. (The full 94-mile corridor will be New England’s longest rail trail upon its scheduled 2023 completion.) If you pedal the 16-mile downhill segment from West Danville to St. Johnsbury, you’ll ride through shaded forests of maple, birch, and hemlock, across bridges, past dramatic bedrock outcrops, and through old railroad tunnels. Tree-ringed Joe’s Pond in West Danville is a lovely spot to swim and fish for panfish and trout. Those who opt for the undulating 17-mile segment between Morristown and Cambridge will ride near the Lamoille River (at times) and past fields of corn. A signature Vermont structure, the 19th-century Poland Covered Bridge, is visible from the train-themed playground and trailhead at Cambridge Junction.