Driving is a sport and a joy on these scenic road trips through Vermont, Maine, and New Hampshire.

Whether you’re happiest driving on four wheels or two, you’ll love these six Northern New England road trips with nonstop views. Sure, there are plenty of tempting stops along each route. But these fun-to-drive highways and byways—which are worthy of car ads and travel guide covers—are attractions all by themselves.

From York to Biddeford Pool: 30 miles 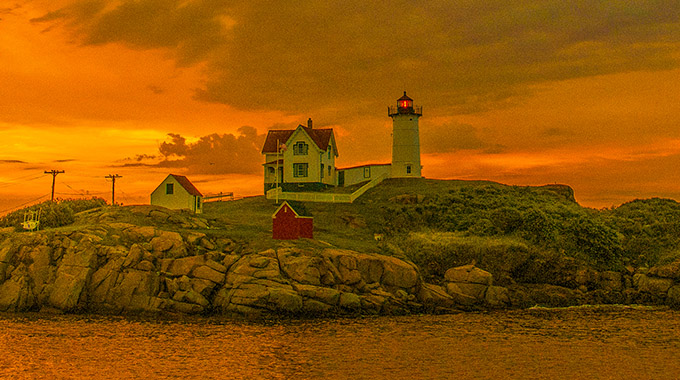 While this coastal route can be clogged with cars at the peak of Maine’s all-too-brief summer, it’s a spectacular sightseeing drive any other time of year, even in winter, when ocean views are dramatic and soul-soothing.

Your starting point is York’s Sohier Park (A on map), which looks out at the iconic Cape Neddick “Nubble” Light on an island just offshore. Follow Nubble Road and Broadway from here to US 1A North, passing through York Beach with its tall waves and family amusements.

Bear right on Shore Road and hug the coast as you continue through Ogunquit. Perhaps you’ll have time to venture off on Sumac Road to look at the boats, visit the Ogunquit Museum of American Art (B), and peek in the shops at Perkins Cove. Shore Road ends at US 1, which you’ll take north through Wells to the turnoff for State Route 9 East. You might spot shorebirds, because the road runs through the Rachel Carson National Wildlife Refuge (C) en route to the resort town of Kennebunkport.

In the fishing village of Cape Porpoise, turn left to stay on SR 9, and, in about 6 miles, turn right on to Fortunes Rocks Road, which slithers between sparkling ponds and open ocean to meet SR 208. That continues to Biddeford Pool (D), a hidden-away Maine coast community eager to share its beach and its lobster catch with you. 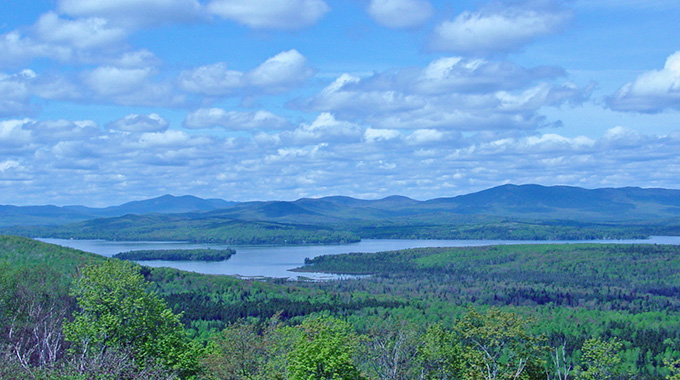 Inland Maine is a world apart from the state’s rugged coast, and its roadways rival those anywhere in the country for scenic splendor.

This trip begins in the mountain village of Bethel (A) and follows US 2 East alongside the Androscoggin River, known for its trophy-size trout.

In Mexico (B), you’ll turn left on SR 17 West and drive beside the Swift River, an Androscoggin tributary known for nuggets of real gold. Coos Canyon (C), a rocky gorge in Byron, is where you’re most likely to see souvenir seekers panning for sparkling treasure.

The most radiant spot on this drive, though, particularly when leaves turn fall shades of zesty yellow and auburn, is the scenic overlook just under 12 miles farther north. Known as Height of Land (D), it provides a dreamy westward view of Mooselookmeguntic Lake and New Hampshire’s White Mountains. Soon, you’ll reach the shores of Rangeley Lake (E). Turn right onto SR 4 South, and drive toward the town of Rangeley (F), with Saddleback Mountain in view. 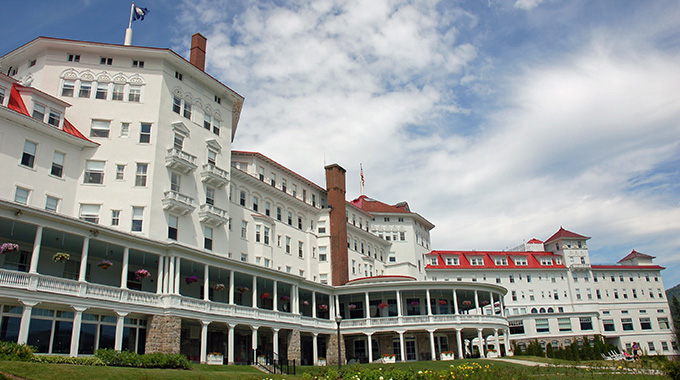 Oh, the sights you’ll see on the White Mountain Trail National Scenic Byway, which begins and ends in Conway, New Hampshire (A).

The first leg—SR 112 West to Lincoln (B)—is better known as the Kancamagus Highway, or simply “the Kanc” to locals. You’ll relish the twists and turns and the views of mountains, forests, and the rushing Swift River as the 34-mile highway climbs nearly 3,000 feet. Dense stands of deciduous trees that don fiery colors when nights begin to snap cold make this New England’s most renowned fall foliage drive.

In Lincoln, pick up I-93 North through Franconia Notch (C) to exit 35, then follow US 3 North to US 302 East through Crawford Notch (E). These two magnificent mountain passes have eponymous state parks, which are worthy stops. The AAA Four Diamond Omni Mount Washington Resort (D) in Bretton Woods, the greatest survivor of New Hampshire’s grand hotel era, and roadside waterfalls like Silver Cascade are just a few of the stunning visuals that will draw your gaze along US 302.

As you continue through Glen and North Conway, you’ll pass family attractions like Story Land and the Conway Scenic Railroad, which have entertained families for generations.

US 302 connects with SR 16 South for the final stretch along the Saco River back to Conway (H). 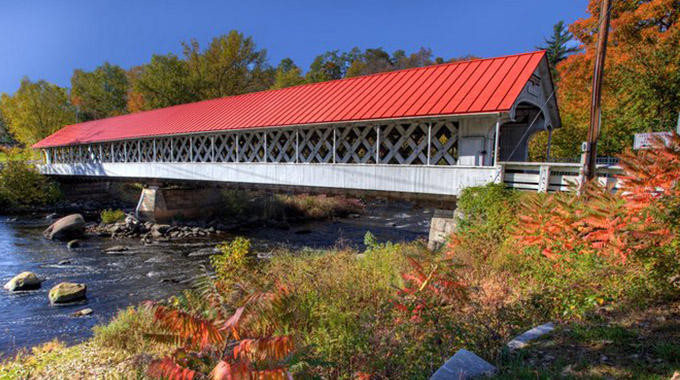 In a 13.1-mile stretch of New Hampshire between Winchester and the vibrant little city of Keene, you can collect five historic covered bridges spanning the Ashuelot River by zigzagging on and off SR 10.

As you motor through Dublin—a town as perfectly New England as you’d expect the home of Yankee Magazine to be—roadside attractions include Friendly Farm (F), a vintage farmstead turned feeding and petting zoo, and crystal-clear Dublin Pond with the hulking shape and bald summit of Mount Monadnock as its backdrop.

Peterborough (G), the inspiration for Thornton Wilder’s play Our Town, will entice you to turn left off SR 101 on Grove Street to see its red-brick downtown. After this detour, continue on SR 101 to Miller State Park (H), where the narrow auto road leads to the 2,290-foot summit of Pack Monadnock. Even without climbing the mountaintop fire tower, you’ll see Mount Monadnock, the White Mountains, and—on clear days—the skyscrapers of Boston nearly 70 miles away. 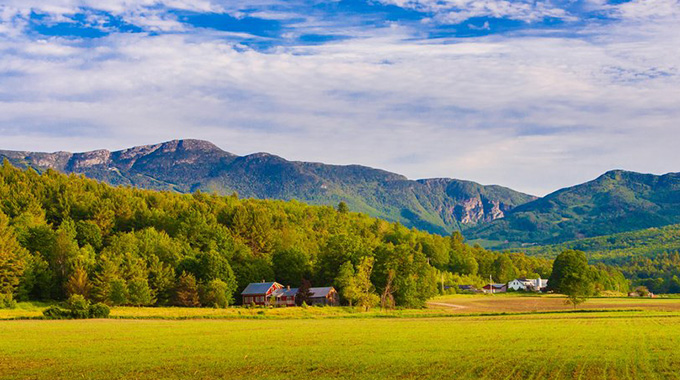 A Vermont farm with Mount Mansfield in the background. | Photo by Don Landwehrle / Alamy Stock Photo

This Northern Vermont drive, which combines peaceful, rural roads and the state’s most exhilarating mountain pass, begins just 25 minutes east of Burlington at the classic, mid–19th-century Old Red Mill (A) on Browns River in Jericho.

Drive east toward Underhill on SR 15, and your windshield will frame a head-on view of Mount Mansfield, Vermont’s tallest peak.

In Cambridge, SR 15 traces a stretch of the Lamoille River, and as you admire scenes of red barns, weathered silos, and inky mountain slopes, you’ll understand why plein air painters have been drawn to this region for more than a century.

In Jeffersonville, turn right onto SR 108, and follow the slender, twisting cut through Smugglers’ Notch (B), named for the daring “entrepreneurs” who illegally brought goods into the country from Canada via this route in the early 1800s and again during Prohibition.

You’ll see the ski trails of Stowe Mountain Resort (C) as you descend into Stowe Village (D). Vermont’s upscale ski town is even prettier when the hills are alive with the colors of summer and fall.

Scenic drive 6: Every classic Vermont scene in a single drive 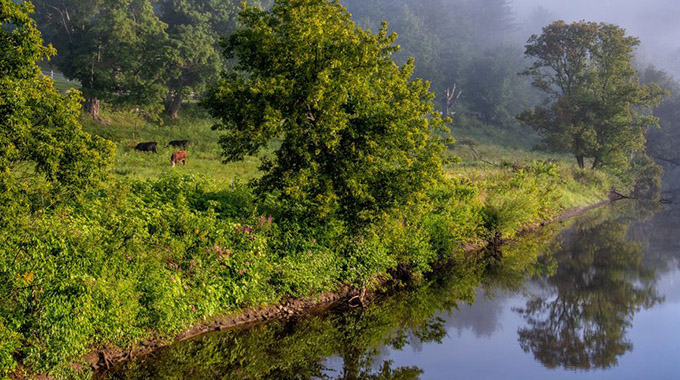 Vermont conjures images of Rockwellian towns, ski mountains, and, of course, cows. This drive unfolds like a coffee table book of photos that capture the essence of the Green Mountain State.

Begin at the Arlington Covered Bridge (A) in Arlington across the green from the former home and studio of beloved illustrator Norman Rockwell. Follow SR 313 East, chasing the Battenkill River, Vermont’s famous fly-fishing stream. Then, turn left on to SR 7A North, which winds through the heart of Manchester with its distinguished inns, shops, and cultural attractions.

Before you reach Manchester Village, watch for a right turn onto Hildene Road; it's a worthy departure to view Hildene (B), the former estate of Robert Todd Lincoln, son of the 16th U.S. president. At the rotary in Manchester Center, take the first exit onto SR 30 (Depot Street), head east, and continue onto SR 11.

Only the rare driver can resist pulling over at the Mount Bromley Overlook to savor one of the best views in the state of the Green Mountains’ rolling ridges, especially when they’re splatter-painted with autumn tints. Continue to Londonderry, where you’ll meet SR 100, the picturesque north-south byway that travels almost the length of Vermont. Follow it 5 miles north to Weston, home of the Vermont Country Store (C), which is both a photo op and a destination for eclectic gadgets and Vermont-made gifts.