6 top things to do at Acadia National Park

The sun sets over Hunters Beach at Acadia National Park, the country’s easternmost national park and one of the top attractions in Maine. | Photo by W Thomas Dunn Jr.

Searching for the top things to do at Maine’s Acadia National Park? Join the 3.5 million or so annual visitors who have fallen in love with this spectacular, mountain-crowned coastal gem since it opened more than a century ago. Revel in the fresh air and natural social distancing as you choose each day’s adventures. Drive the spectacular 27-mile Park Loop; get your steps in on more than 150 miles of hiking trails; and save time for these don’t-miss memory makers. Entrance pass required ($30 for vehicles, good for seven days).

1. Watch the sunrise from atop Cadillac Mountain

A golden panorama rewards those who venture to the mountaintop before daybreak. | Photo by Harry Lichtman

Perched at the easternmost tip of the U.S., Maine is the first state to witness the dawn’s earliest light, and the top of Cadillac Mountain is one of the first places in Maine to be gilded by its rays. To ensure a good viewing perch on the summit’s granite outcroppings, plan to arrive at least 30 minutes before sunrise. That means being up and at ’em wicked early, because on most summer days the sun appears before 6 a.m. Be sure to make an advance online reservation for timed entry to the 3-mile-long Cadillac Summit Road (fee charged), and allow a little extra time to navigate the steep, narrow, winding highway in the dark. When the orb slowly emerges from the sea, a hush falls over the crowd. Even if you’re not a morning person, the dramatic show is well worth sacrificing a few hours of shut-eye.

2. Gaze at the stars 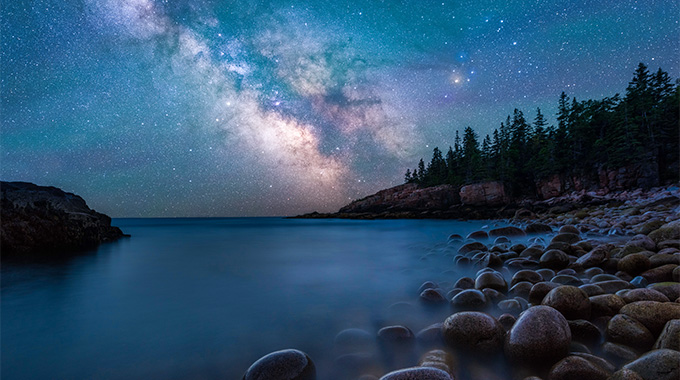 Far from man-made light pollution, the inky skies over Acadia display a staggering number of stars. The best viewing conditions begin an hour or two after sunset. Choose a clear, moonless night and spread out a blanket on Sand Beach, the Park’s only sandy swath. (If the moon is full, the stars won’t twinkle as brightly, but the sight of moonlight dancing on the waves is a treat.) To avoid a crick in your neck—and a possible feeling of vertigo—it’s a good idea to lie down. Gaze up at the Milky Way, and you may feel you’re floating. Get your bearings by locating the North Star and the Big Dipper and Little Dipper constellations. Then see if you can identify Cassiopeia and the Summer Triangle. In July and August, you might also see the Perseid meteor showers. Try to count the shooting stars and look out for the International Space Station zooming by.

To get the most from the experience, and to learn the mythological stories behind the constellations, sign up for an hour-long ranger program offered in the summer. (Avoid disappointment: Check online to see if you can reserve your spot a few days in advance.) Other prime stargazing spots in the park include Seawall Picnic Area, the lawn at Jordan Pond House, and the top of Cadillac Mountain. Remember to bundle up; it can be quite chilly at night. For safety in the dark, carry a flashlight with a red-light option or a smart phone with a red-light app, because white light can temporarily hinder night vision. Bring binoculars or a small telescope, too. And don’t forget the bug spray—the stars aren’t the only things that come out at night.

3. Ride an e-bike on automobile-free roads

When exploring the park on two wheels, an electric bike can put some extra pep in your pedal. | Photo by Andrey Popov/stock.adobe.com

Gentle curves, forested and seaside beauty, and picturesque stone bridges arching over byways and brooks make Acadia’s 45 miles of automobile-free carriage roads a bicyclist’s dream. You’ll also get breathtaking ocean and island views at the top of stamina-challenging inclines. Thankfully, there’s a panacea for those aching leg muscles and overtaxed lungs—e-bikes. Note that only Class 1 pedal-assist (no throttle) e-bikes, with a top speed of 20 mph, are allowed in the park. Several outfitters on the island rent the bikes by the half or full day, and longer.

4. Pop over for popovers at Jordan Pond House

Puffy popovers and a spot of tea are the perfect ending to a hike on the trails that lead to Jordan Pond House. | Photo by Patti Gravel

Back in the late 1800s, Bar Harbor’s fashionable summer folk discovered the delights of stopping for afternoon tea and popovers at the Jordan Pond House, and the tradition has flourished ever since. It’s not hard to understand the enduring appeal of these light, slightly chewy egg-batter rolls. Served warm, they resemble mini Yorkshire puddings with hollow centers that practically beg for a dollop of strawberry jam and butter. Settle in at a table on the lawn beside Jordan Pond and pop one into your mouth while enjoying views of two small, rounded mountains called the Bubbles. Be a purist and order a pot of tea, or go for a glass of tangy, scratch-made lemonade. The restaurant also offers a full menu, and its lobster stew is legendary. Jordan Pond House is open mid-May through late October.

Sign up and deepen your understanding of the nature around you. Be aware that face masks are now required in all federal buildings and lands. | Photo by Friends of Acadia/NPS

Acadia’s mountains, woodlands, and shore offer endless opportunities for exploration. It’s fun to make your own discoveries, but if you want to know more about the geological formations, animal and plant species, history, and other aspects of the park, sign up for a ranger-led program. Designed for would-be naturalists of all ages, they include carriage road walks, evening presentations at Acadia campgrounds (open to both campers and noncampers), and cruises on the waters surrounding Mount Desert. You might identify clues to the presence of forest animals, search for sea birds and mammals, and more. Offered spring through fall, most programs are scheduled early in the day or in the late afternoon or evening. Most programs are free; some of the most popular require advance reservations (and fees), and it’s best to sign up for those a day or two in advance. For the latest and most accurate list of available programs, visit the calendar page on the park’s website or check its Facebook and Instagram accounts. 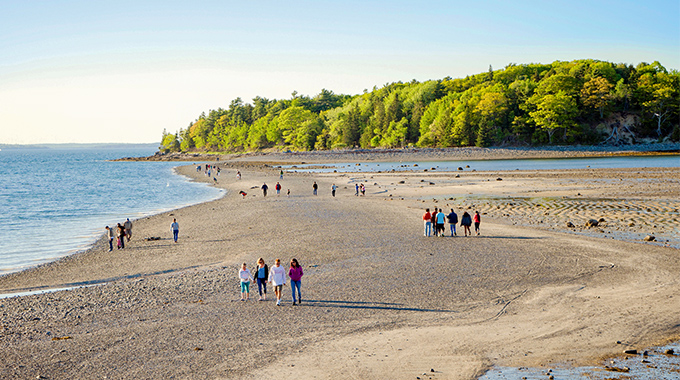 The bar for which Bar Harbor was named doesn’t serve cocktails. That’s because it’s a sand bar, or natural causeway, that stretches for half a mile across the ocean floor to a small island appropriately named Bar Island. Located a few blocks from the downtown shops and just up the way from the West Street town pier, this low land bridge is covered by as much as 12 feet of water when the tide is in. For about 90 minutes on either side of low tide, however, you can walk across to the island. On the island, an old road leads past a meadow (abloom with lupines in early summer) to a forested trail that ascends to a hilltop lookout. After the short climb, you’ll be rewarded with expansive views across the bay to Bar Harbor and Cadillac and Champlain mountains. Monitor the time and stay alert to the incoming tide so you aren’t marooned on the island. If you get stuck, you’ll have a nine-hour wait for the tide to go back out. Or you can call a pricey water taxi to rescue you.