I love reading Dr. Seuss books, with their silly word play and peculiar illustrations, to my two young children. So when my family and I visited Joshua Tree National Park, I was convinced the oddly shaped trees before us were Truffula trees right out of The Lorax.

Thanks to Pasadena socialite and passionate gardener Minerva Hamilton Hoyt, we can all enjoy this multifaceted, otherworldly landscape. Her efforts led to Joshua Tree’s designation as a National Monument in 1936 by President Franklin Roosevelt. In 1994, it was elevated to a national park status, and it now draws nearly 3 million visitors annually.

Two deserts meet at this park, which is bound by State Route 62 to the north and west and Interstate 10 to the south. The western portion lies in the higher-elevation Mojave Desert. That’s where you’ll find the Joshua trees, which aren’t actually trees but instead belong to the yucca family. The eastern and southern sections sit in the more arid and hot Colorado Desert. The boundaries of these two deserts often blur and aren’t easily distinguished.

“What make the two deserts different is the plants and animals that occupy them,” explains Christian Delich, a ranger at Joshua Tree National Park. “This whole area is a transition zone.” 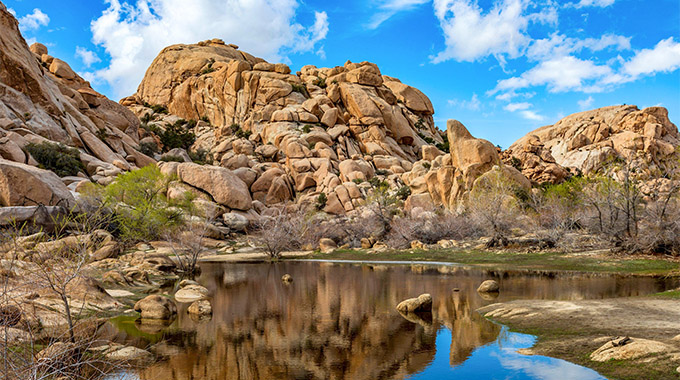 This 1.5-mile loop, with minimum elevation gain, will appeal to all ages. The trail follows mounds of granite boulders before reaching a tranquil reservoir built more than a century ago by ranchers. Though the water level varies according to the rainfall, the dam attracts a variety of four-legged nocturnal visitors. Among them: bighorn sheep, kangaroo rats, coyotes, and black-tailed jackrabbits. 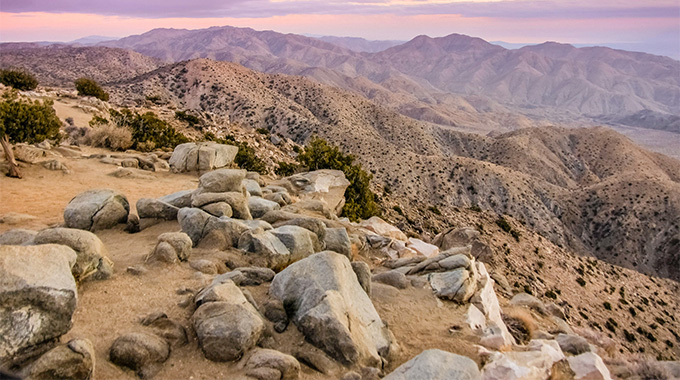 Hikers on the Keys View Trail are rewarded with panoramic views of the mountains and desert. | Photo by Yuval Helfman / Alamy Stock Photo

One of the highest vantage points in the park, Keys View is a short, paved loop that’s easily accessible from the adjacent parking lot. If you visit on a clear day, the bird’s-eye views are breathtaking and showcase the ethereal beauty of Joshua Tree and the surrounding Coachella Valley. Spot Mount San Jacinto, Mount San Gorgonio, and even the Salton Sea and the San Andreas Fault in the distance. This lookout is also popular for catching the sunset. 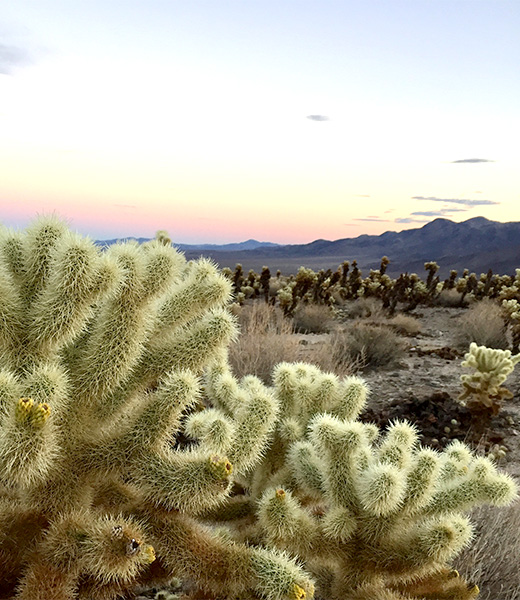 The Cholla Cactus Garden is home to one of the park's few stands of teddybear cholla. | Photo by Susan An

A quarter-mile-long boardwalk leads visitors through a stand of yellow-spined teddybear cholla. Despite its charming name, don’t hug or touch teddybear cholla because their stem joints easily attach, or “jump,” to skin or clothing and are painful to remove. This ingenious ability, however, enables the plant to reproduce. Watch for cactus wrens, which manage to effortlessly perch on the cholla’s spiny branches. 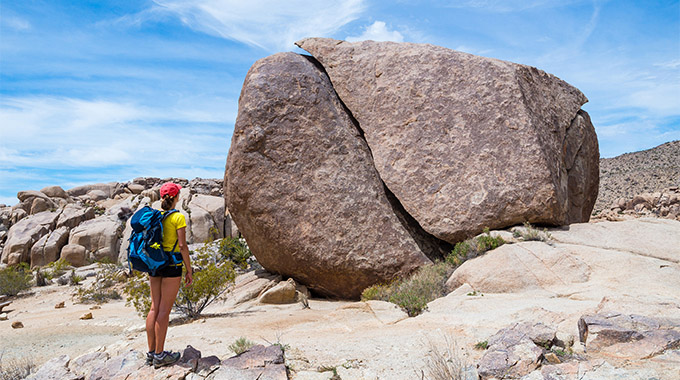 This 2-mile trail is a great loop through dry creek beds, boulder piles, and oak and piñon pine woodlands. The “split rock” refers to a behemoth boulder with a long crack running through it. A short spur trail breaks off and leads to Face Rock, which is said to look like a human face, while another boulder on the trail resembles a tulip. Look for blooming plants such as foxtail cactus and desert paintbrush along the trail during spring. 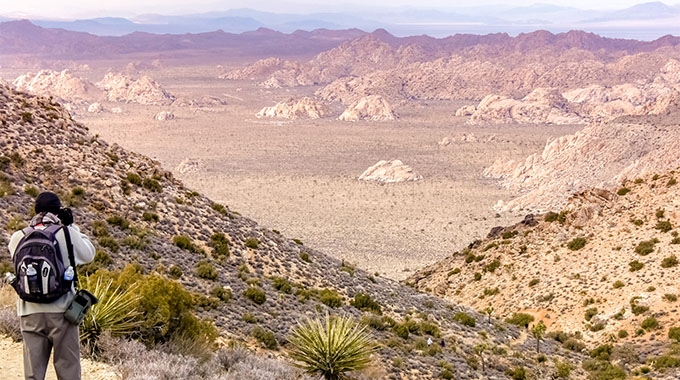 A hike to the summit of Ryan Mountain can be challenging but views are breathtaking. | Photo by Yuval Helfman / Adobe Stock Image

You must be in good shape to ascend Ryan Mountain, located in the middle of Joshua Tree National Park. The reward is panoramic views at its 5,457-foot summit. The 1.5-mile trail (3 miles round-trip), which runs along the northwestern side of the mountain, features carved steps and a rapid 1,000-foot gain in elevation. You’ll spot a variety of desert plants along the way and might see dozens of rock climbers on nearby boulders. 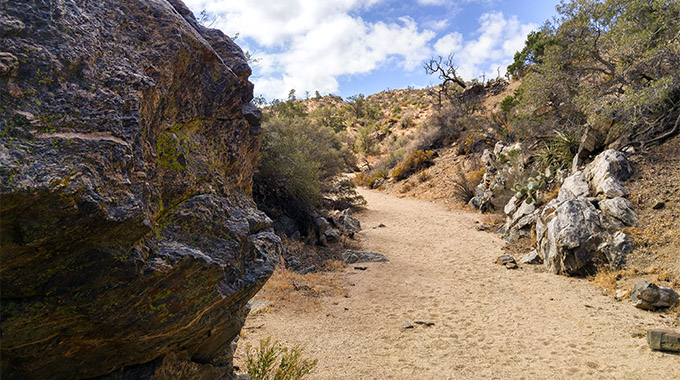 The Panorama Loop trail starts in a sandy wash then ascends to the ridgeline of the Little San Bernardino Mountains. | Photo by Jeffrey Rocchio

The Black Rock Canyon and campground sit in the Yucca Valley with its own entrance. Located at the northwest edge of the park, this area is wetter and higher in elevation, which explains the numerous Joshua trees, junipers, and denser vegetation. The Panorama Loop Trail is a moderately strenuous 6.6-mile loop with a 1,100-foot elevation gain affording stunning views of the surrounding mountains. 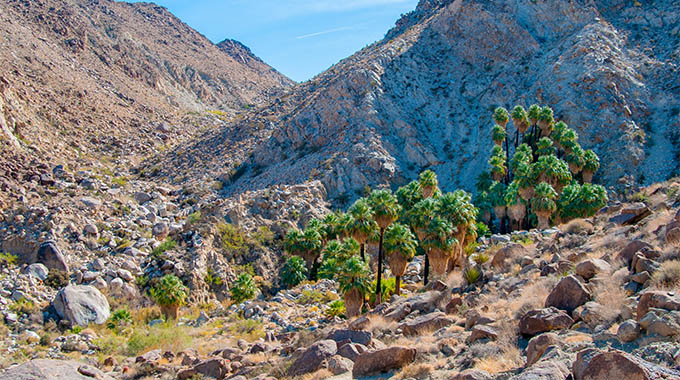 The oasis at the end of the 49 Palms Trail attracts animals and birds, including quail, bighorn sheep, and coyotes. | Photo by Nicholas / Adobe Stock Image

You'll find the 49 Palms Oasis trailhead off SR 62 on the northern edge of the park. The day-use trail, which the NPS rates as moderately strenuous, is 3 miles roundtrip and gains 300 feet before descending to an oasis of California fan palms within a rocky canyon. The NPS advises hikers to avoid the 49 Palms Trail on a hot day.

Four more things to do in Joshua Tree

Between Jumbo Rocks and Sheep Pass, try the self-guided, 18-mile Geology Tour Road, which requires a four-wheel-drive vehicle beyond the first few miles. The road winds through some of the vast interior of the park. Signs note geological points of interest along the way.

Human inhabitation here dates back 5,000 years. In more recent centuries, Native Americans, miners, cattle ranchers, and homesteaders found their way to Joshua Tree and managed to survive and even thrive in this desolate, dry landscape.

You can visit one such historic ranch, built by William Keys, where he, his wife, Frances, and their five children lived. Along with peeking into the family’s home, sheds, and a schoolroom built for the children, visitors can see artifacts, such as Keys’ stamp mill, used for extracting ore.

Another signature feature of Joshua Tree is its huge granite boulders. Thousands of people come to the park annually to scramble up its more than 8,000 climbing routes and 2,000 bouldering opportunities.

Just ask our daughter, who thoroughly enjoyed safely scaling every rock she could. Figuring out the best climbing route was like a puzzle for her, with the subsequent rush of satisfaction and sense of achievement when she made it to the top.

“Those islands of rock, or inselbergs, which means ‘mountain island’ in German, are the cores of ancient rocks,” park ranger Delich explains. “You can only see those rocks here because it’s so dry. If it rained enough, the rocks would be covered up by soil and plants.”

It’s fair game to scramble and climb up any rock unless there’s a sign noting otherwise. Some are off-limits to protect Native American petroglyphs, Delich says. 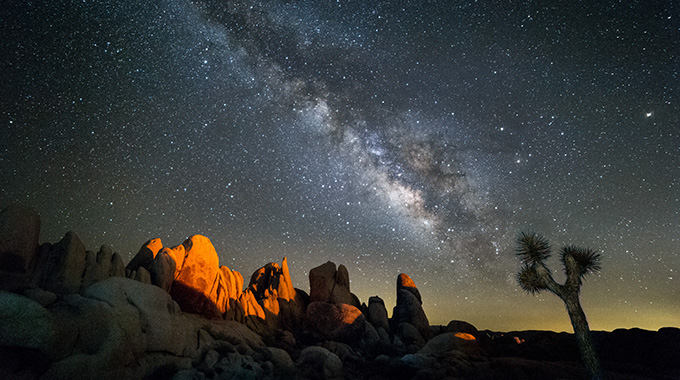 The Milky Way is visible on a moonless night in Joshua Tree. | Photo by Andrew Keresztes

During moonless summer nights, you can spot the Milky Way, as well as meteor showers. In winter, look for Sirius, the brightest star in the sky, and constellations such as Orion.

The Desert Institute, the educational arm of the Joshua Tree National Park Association, a nonprofit partner of the park, offers night-sky photography workshops as well as many other field classes.

What you need to know before you go

Pick up a copy of the AAA Joshua Tree National Park map. It’s free for members at your local AAA branch.

Download the AAA National Parks Activity pack. It has games, coloring activities, and more to entertain the whole family.