When I moved to Chicago in the 1970s, no one gave a second thought to the city’s riverfront—except to mock it. “Don’t fall in,” my new friends joked about the ominously murky Chicago River.

A look back through history shows many Midwest cities were founded near rivers because they provided a means of transportation, a source of water for industry, and, sadly, a dump for waste. As decades passed and cities grew, these waterways often became muddy backwaters, polluted and ignored.

But several cities are no longer turning their backs on them, transforming rivers from embarrassments into assets by cleaning up the channels and creating riverwalks along their banks. Restaurants and bars, memorial plazas, works of art, entertainment venues, museums, and all sorts of recreational opportunities on and off the water now beckon visitors and locals alike. Take a stroll and discover the appeal of these renewed riverfronts. 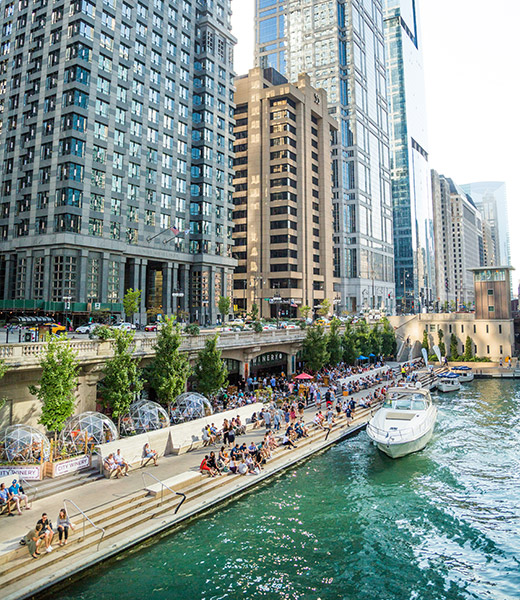 Chicago’s location, where the Chicago River joins Lake Michigan, fueled its rise as the Midwest’s largest city, and the river paid the price. Yet the condition of this once-smelly channel has markedly improved. The south bank has been redeveloped as the city’s second shoreline, stretching 1.25 miles from Lake Michigan to Wolf Point, where the river splits into north and south branches.

The core of the Chicago Riverwalk, between State and Lake streets, evolved in 2 phases, which were completed in 2016, with 6 themed “rooms” spaced between city blocks. Minor updates have occurred ever since.

This linear park, just below street level, has become my go-to place to take visitors. I love to stroll through the canyon of skyscrapers: the iconic Wrigley Building, Trump International Hotel & Tower, and the Merchandise Mart (now called theMART), with an evening light show on its 2.5-acre facade. Out on the river, water taxis and excursion boats, some offering architecture tours, share space with kayaks and other personal watercraft.

I always find much to appreciate on the riverbank in addition to the bars and restaurants. At the McCormick Bridgehouse & Chicago River Museum, I’ve seen how massive bascule bridges, a.k.a. drawbridges, lift to let sailboats pass. I’ve paid my respects at the Vietnam Veterans Memorial Plaza, watched kids play in a zero-depth fountain, and shared a tree-shaded picnic on the tiered seats in the River Theater—one of the Riverwalk’s 6 rooms that are tucked into coves. With an Illinois license, I could even fish in the river—an unthinkable activity just a few decades ago. 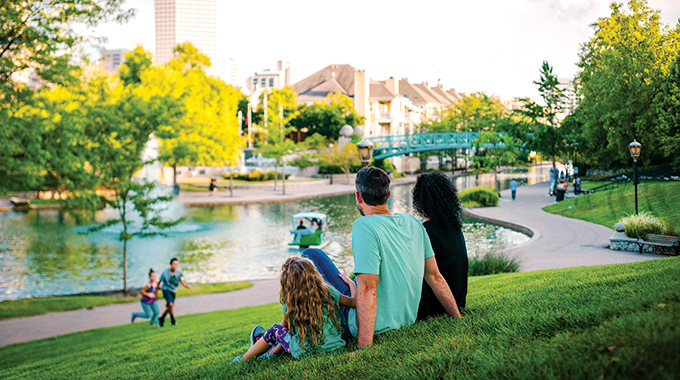 The Central Canal provides a variety of relaxing experiences on the water and along its banks in Indianapolis. | Photo courtesy Visit Indy

Indiana’s capital turned its attention to its riverfront in 1979, when the state created the White River State Park Development Commission. Decades of revitalization followed along the White River west of downtown Indianapolis, and more of the same is planned to spread to its suburbs in the coming years.

The sprawling urban state park covers 250 acres that combine green spaces and waterways with major attractions: the Indiana State Museum and IMAX Theater, the NCAA Hall of Champions, the minor-league baseball park Victory Field, TCU Amphitheater at White River State Park, the Eiteljorg Museum of American Indians and Western Art, and the Indianapolis Zoo and its White River Gardens (the gardens are temporarily closed for renovation). Not long ago, I strolled the banks of the river here, admiring these landmarks and the sculptures dotting the area.

But the White River wasn’t the park’s only waterway that grabbed my attention while exploring this central Indiana metropolis, known simply as Indy. The 1.5-mile Central Canal led me from the riverfront to downtown’s skyscrapers. Visitors can make the journey by bike or surrey from Wheel Fun Rentals or a pedal boat rented east of the Indiana State Museum. Want to be serenaded? Book a gondola with Old World Gondoliers through September 22. 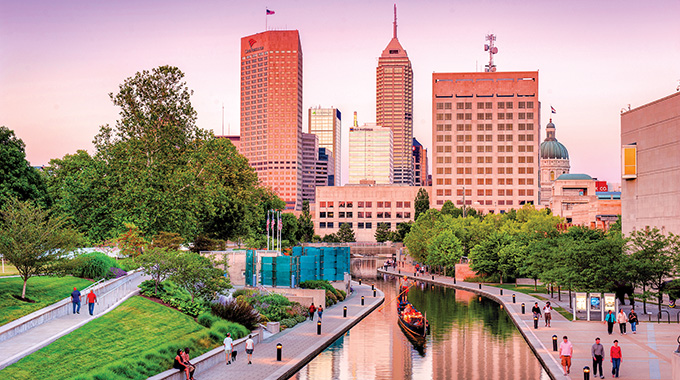 The White River flows south to the Hoosier capital from Hamilton County, the state’s fastest-growing county, which encompasses the suburbs of Noblesville, Fishers, and Carmel. Future revitalization of the riverfront is the goal of the White River Vision Plan, a joint effort of the City of Indianapolis and Hamilton County Tourism.

Ideas gathered from the community in 2018 and 2019 will help restore the river and increase year-round activities on it and along its banks in the coming years. 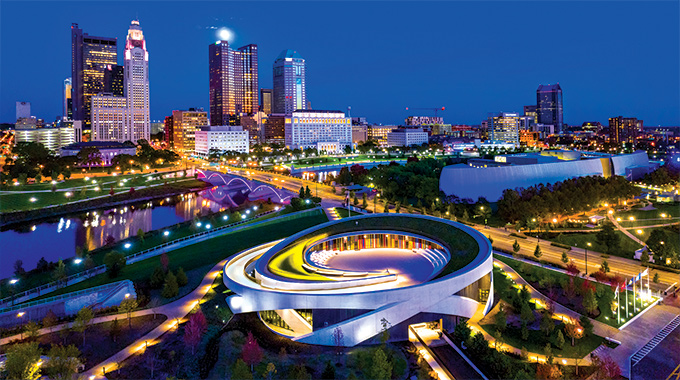 Once brown and sludgy, the Scioto River was transformed when a downtown Columbus revitalization plan in 2013 brought about the removal of the Main Street Dam, which had blocked the free flow of the river. The faster-moving river narrowed, and the reclaimed land became part of the Scioto Mile, an urban oasis and vibrant gathering place. Now, more than 175 acres form a ribbon of green through Ohio’s capital, with the city skyline as a backdrop.

The Scioto Trail meanders for about 10 miles along the river through the heart of Columbus. I started at the south end, where Scioto Audubon Metro Park covers 120 acres on the east bank. Once a blighted industrial expanse of railyards and factories, the park features a birding area and one of the nation’s largest free-climbing walls. Farther north, Bicentennial Park offers summer concerts, riverfront views at Milestone 229 restaurant, and the 15,000-square-foot Scioto Mile Fountain, where kids love to play. Windrose Outdoor rents kayaks and stand-up paddleboards, and there’s a CoGo Bike Share station nearby. 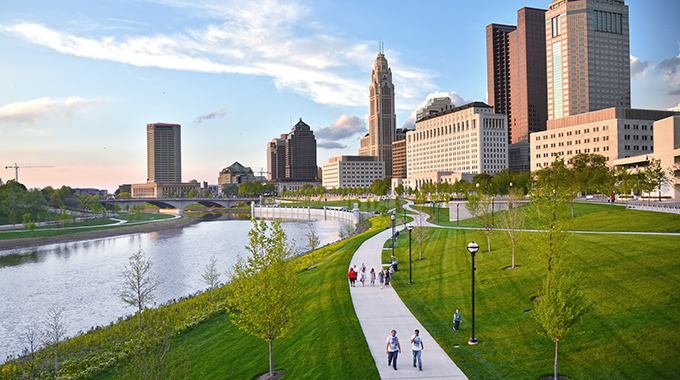 On the river’s opposite bank, I was captivated on a tour of COSI (Center of Science and Industry), home to Ohio’s largest planetarium and more than 300 hands-on science exhibits. Discover military history at the National Veterans Memorial and Museum, which opened in 2018 and is the only U.S. museum dedicated to veterans from all branches and eras of service. Through October 2, “The Twenty-Year War: Our Next Greatest Generation” shares powerful stories of veterans who have served in the war on terrorism.

Changing the course of the Scioto also changed the Franklinton neighborhood, where the area’s first European settlers landed along the river in 1797. The low-lying land was prone to flooding until a floodwall paved the way for redevelopment as a burgeoning arts district. I spent a pleasant afternoon poking into artists’ studios and enjoying the neighborhood’s restaurants and craft breweries (be sure to designate a driver if you plan to drink alcohol). 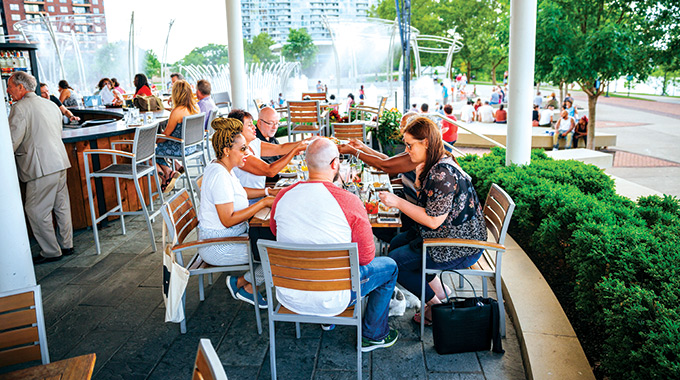 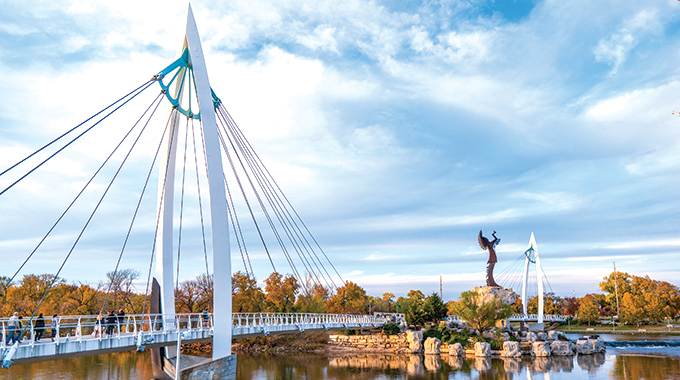 Erected nearly 50 years ago, Wichita's iconic Keeper of the Plains statue has become a symbol of the city. | Photo courtesy Visit Wichita/Wasim Muklashy

I stood transfixed by the Ring of Fire, the flaming pots surrounding the Keeper of the Plains that are lighted nightly in Wichita, Kansas. The 44-foot steel sculpture, which honors the city’s Native American heritage, has stood sentinel on sacred ground at the confluence of the Arkansas and Little Arkansas rivers since 1974, when it was finished by Kiowa-Comanche artist Blackbear Bosin. A $20 million river corridor improvement project completed in 2007 placed Keeper on a 30-foot pedestal and connected its plaza to both riverbanks with 2 pedestrian bridges.

At the Mid-America All-Indian Museum next door, Native American art and artifacts from around the country are on display. It’s one of 5 attractions known collectively as Wichita’s Museums on the River. The Old Cowtown Museum takes guests back to the era between 1865 and 1880, when cattle drives arrived on the Chisholm Trail. Botanica Wichita boasts more than 30 themed gardens and exhibits, and the Wichita Art Museum has some 10,000 works in its collection, which emphasizes American art. I fell in love with Moshe Safdie’s architecture at Exploration Place, a hands-on science museum with 2 sleek buildings, one surrounded by water. 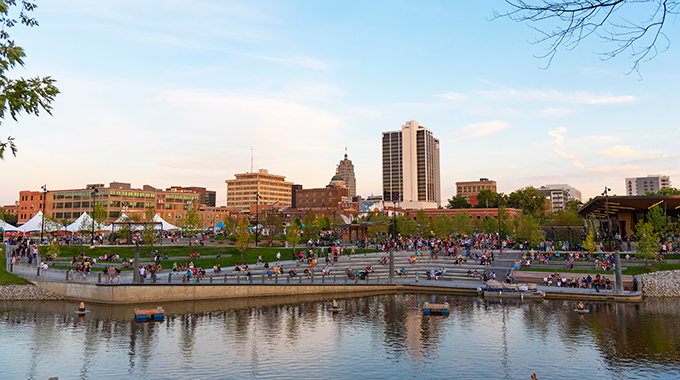 Three rivers—St. Marys, St. Joseph, and Maumee—flow through Fort Wayne, where downtown revitalization is giving Indiana’s second-largest city a face-lift. The first phase, Promenade Park, debuted in 2019 on 4.2 acres of riverfront property. There’s a treetop canopy trail, a pavilion, a playground, an amphitheater, and a plaza. Visitors who fancy having a bite or a beer can stop in at Trubble Riverside Café & Tap. Savor the citrus hops in the Dogslobber IPA at the brewery, which has a dog-friendly beer garden.

Docks make space for excursion boats, including Sweet Breeze, a replica 1840s canal boat. Visitors who want to get on the river should head over to Fort Wayne Outfitters & Bike Depot to rent a canoe, kayak, or stand-up paddleboard. Those who prefer 2-wheel transport can rent a bike to explore the 25-mile Rivergreenway trail that winds alongside the trio of rivers. I followed it to the Martin Luther King Jr. Memorial Bridge and crossed to the lush gardens of Headwaters Park on my way to the Old Fort. 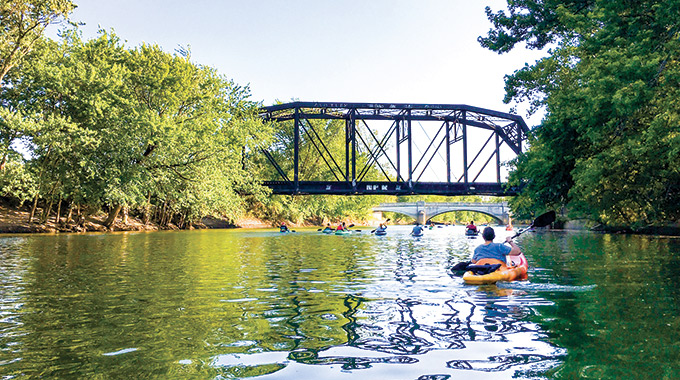 In the 18th and 19th centuries, 2 French and 3 U.S. military strongholds occupied ground along the rivers. The Old Fort is a reconstruction of the last of them, an all-wood fortress built in 1815 and 1816. As I explored the site, a red-coated drummer and a fife player marched across the grounds playing their instruments while actors in period dress performed reenactments and demonstrated military skills.

Hungry, I walked a block and a half from Promenade Park to The Landing, located on the spot where Wabash & Erie Canal boats once docked. This revamped block-long pedestrian street opened in 2020 to become the city’s new foodie destination, with restaurants, a brewery, a coffee bar, and more.

Katherine Rodeghier is a freelance writer from the Chicago area.