American flags fluttering from front porches, local businesses, schools, and parks are ubiquitous across the country—especially in the summer months when the red, white, and blue is a focal point of celebrations from Memorial Day to Labor Day.

But it has not always been that way.

It was not until 1889, after the 100th anniversary of George Washington being sworn in as president, that anyone considered flying flags at places other than government buildings. And whom do we have to thank for that?

Certainly not one of our more prominent presidents, Harrison was our 23rd and served in the Oval Office at the time of Washington’s centennial. Celebratory events in New York included American flags in shop windows, something that simply had not been seen before. When it was over, Harrison suggested sending those flags to schools across the country “to develop an increased love for the flag at home and increased respect abroad.”

Such fascinating morsels about Harrison and other presidents can be savored at presidential homes, museums, and other sites across the Midwest. Some of the country’s greatest leaders, born and bred in the heartland, tapped into their Midwestern sensibilities to guide a nation.

Read more: Visit the homes of our country’s Virginia-born presidents. 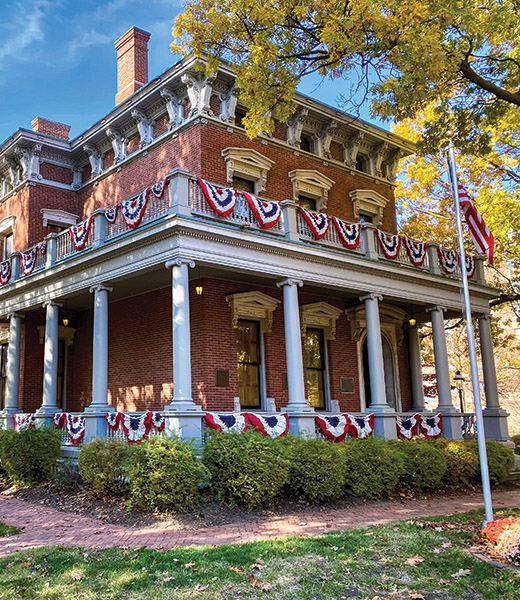 Visitors will learn much more about Harrison besides his devotion to the flag at his Indianapolis home, now the Benjamin Harrison Presidential Site. Harrison was the grandson of our ninth POTUS, William Henry Harrison, whose home in Vincennes is a National Historic Landmark. And he’s the great-grandson of Benjamin Harrison V, a signer of the Declaration of Independence.

Notable accomplishments of Harrison’s term (1889–1893) include signing the Sherman Antitrust Act (the first law of its sort), increasing the United States’ role in global affairs, and setting aside 13 million acres of public-domain land for national forest reserves. For those reasons alone, a visit is in order to his home, which contains mostly original artifacts. Take time to appreciate a massive walnut bookshelf carved by a German immigrant for whom Harrison litigated a case.

“Above all, Harrison valued knowledge, so this one-of-a-kind bookcase truly embodies the man who lived here,” said Charles Hyde, president and CEO of the Benjamin Harrison Presidential Site. “In ways large and small, the nationally significant collection of over 10,000 items truly captures the spirit of the 23rd president.”

During the first week of July, the site hosts a naturalization ceremony for new U.S. citizens and an ice cream social. Other yearly events include theatrical performances and a croquet tournament. 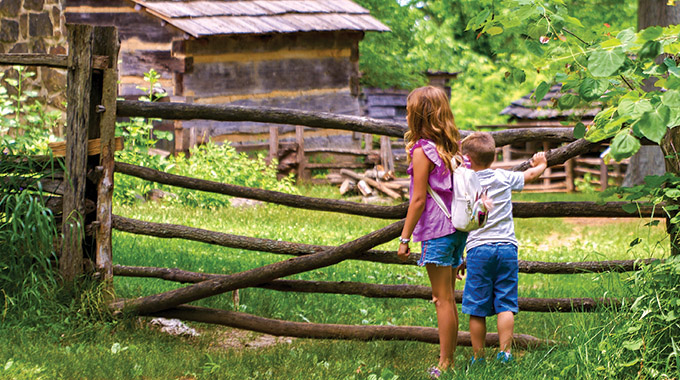 Although Abraham Lincoln is most recognized for his connection to Illinois, which is known as the Land of Lincoln, he was born in Kentucky before the family moved to Indiana, where he lived for about 14 years. He was 7 when they settled in Spencer County, and his boyhood home is now the Lincoln Boyhood National Memorial.

On this southern Indiana soil, Lincoln grew from youth to manhood and developed many of the characteristics and moral traits for which he is famous. The memorial’s visitors center offers a film on the president’s life and a variety of exhibits, and guests can follow a trail to the Lincoln Living Historical Farm that re-creates the family’s daily activities.

The lanky lawyer eventually moved to Springfield, which is ground zero for any exploration of the 16th president. Of the many not-to-miss attractions are the Old State Capitol State Historic Site, where he delivered his 1858 House Divided speech; Lincoln’s New Salem State Historic Site in nearby Petersburg, where he lived for about six years; and his tomb.

For a glimpse of Lincoln as a family man, as well as to explore his rise as a lawyer and politician, visit the home in Springfield where he lived for 17 years with his wife, Mary Todd, and their sons. The Lincoln Home National Historic Site preserves the home as it looked in the mid-1800s, and a stroll through the neighborhood reveals 12 historic structures dating to Lincoln’s time. 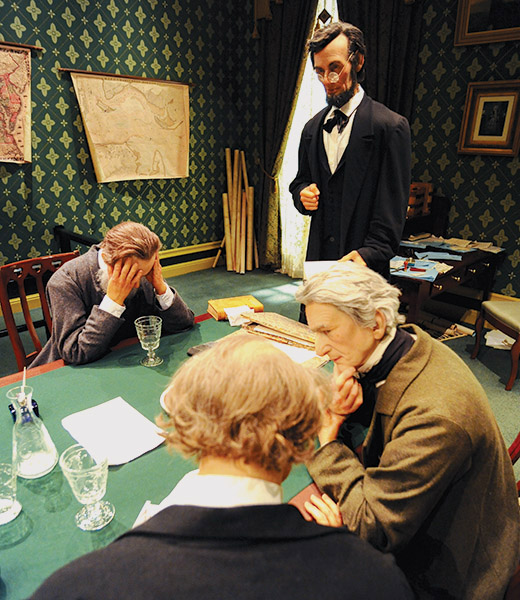 Delve further into Lincoln’s extraordinary life at the Abraham Lincoln Presidential Library and Museum. Through its exhibits, you can immerse yourself in the painful, heart-wrenching divisiveness of the Civil War and slavery. Don’t miss a state-of-the-art theater where ghosts of Lincoln, Mary Todd, and Civil War soldiers join a live actor in a dramatic show.

A figure as influential in American history as Abraham Lincoln, however, cannot be contained in one city. Continue your journey through the 43 Illinois counties that comprise the Abraham Lincoln National Heritage Area. Covering his responsibilities as an Eighth Circuit judge, his debates regarding slavery with Stephen Douglas, and homes of those who influenced his career, the area includes 28 communities and more than 250 wayside exhibits. 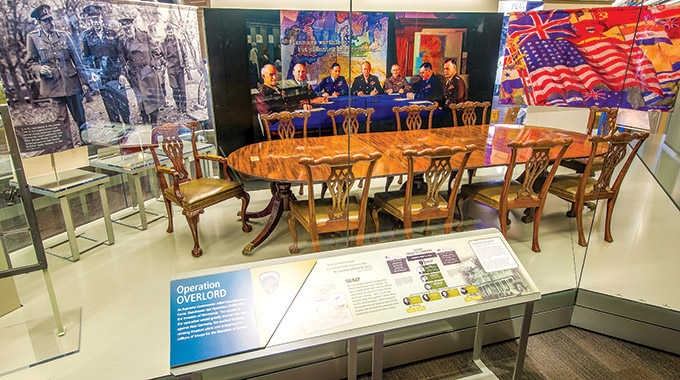 It’s fair to say that as many people travel to the Dwight D. Eisenhower Presidential Library, Museum, and Boyhood Home because of Eisenhower’s leadership through D-Day and World War II as his service as our 34th president. A superb collection of images, exhibits, and artifacts at the Abilene complex chronicles his life—including the massive table around which Eisenhower and other Allied commanders planned the D-Day invasion.

A major renovation of the Eisenhower Presidential Library and Museum, completed in 2019, highlights Ike’s exemplary military service but adds additional insight to his low-key presidency. “I’m just folks. I come from the people, the ordinary people,” he once said.

As many great leaders do, Eisenhower managed without seeking the spotlight. New exhibits focus on the Cold War with Russia, and Eisenhower’s quiet diplomacy that kept the war in check. “I hate war as only a soldier who has lived it can,” proclaims a new exhibit, borrowing from one of Ike’s quotes about war’s brutality and futility.

Mamie Eisenhower gets her fair share of credit for making Ike’s life so legendary. A fashion icon of her day, Mamie’s exhibit reminds us of her frugality and her habit of clipping coupons for the White House staff. Find some of her recipes, including Mamie’s Million Dollar Fudge, on the museum’s website. The Eisenhowers are buried on the library grounds. 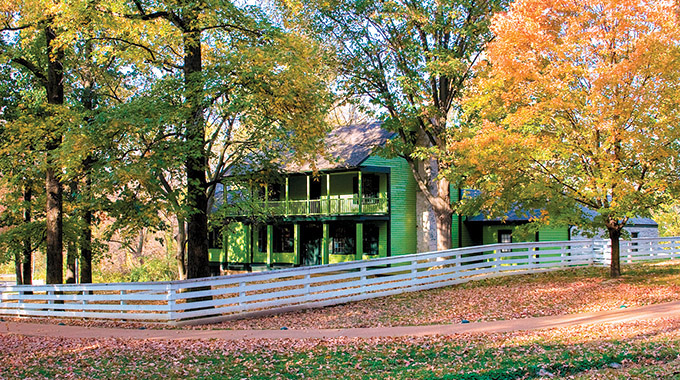 Although Ulysses S. Grant was born in Ohio, Missourians consider him to be one of their own. After graduating from West Point Military Academy, he was assigned to Jefferson Barracks near St. Louis in 1843. That led to him meet Julia Dent, whom he would later marry. For about five years, they lived in Julia’s family home and estate, White Haven, where Grant tried his hand at farming. In 1860, they moved to Galena, Illinois. After his success in the Civil War, he served as president from 1869 to 1877. While living in the White House, the Grants returned several times to White Haven, which Grant purchased from the Dents. Today, visitors can tour the home, now part of the Ulysses S. Grant National Historic Site, and explore exhibits in a museum housed in a horse stable that Grant designed.

A year before Grant died at his home in New York, Harry S. Truman was born on a southwestern Missouri farm in Lamar. Furnishings in the family’s little white house, now the Harry S. Truman Birthplace State Historic Site, reflect how it looked when the Trumans lived there in the late 1800s. 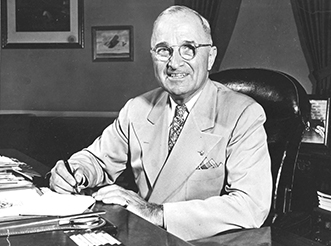 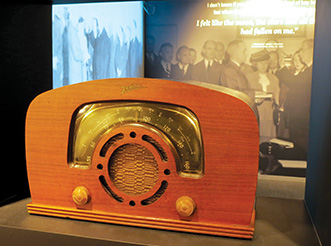 The life and presidency of Harry S. Truman (above left) is chronicled at the Harry S. Truman Presidential Library and Museum, which has undergone a massive renovation. | Photo courtesy  Truman Library Institute 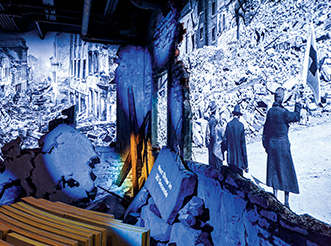 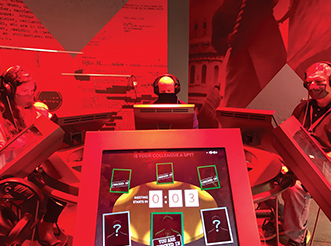 The family moved around but eventually ended up on a farm near Grandview, just south of Kansas City, where young Harry referred to corn husking as work devised by the devil. The farm is one of five properties that make up the Harry S. Truman National Historic Site, but most visitors find themselves drawn to the home at 219 N. Delaware Street in Independence, just east of Kansas City. This was where Harry and his beloved wife, Bess, lived before and after their time in the White House. The expertly preserved home, where the Trumans raised a daughter and led a rather low-key Midwestern life, looks as if Harry just stepped away for a walk.

Based in Kansas City, Missouri, Diana Lambdin Meyer is an award-winning member of the Midwest Travel Journalists Association and the Society of American Travel Writers.

The buck stops at AAA

Needing work to support his family until he could run for re-election as a Jackson County judge in Missouri, Truman took a job selling AAA memberships in 1925. Earning about $5 for each new member he recruited in the Kansas City area, he cleared approximately $5,000 in about a year, equivalent to about $75,000 today.

But his “whirlwind” stint with AAA, as Truman described it, ended when he was elected presiding judge of Jackson County in 1926. Among the duties in that role, he helped oversee road building and repair, which remained a focus of his presidency. While in the White House, Truman communicated with AAA on a number of occasions about the auto club’s dedication to traffic-safety issues.

“The AAAs have been both pioneers and trailblazers,” Truman telegrammed the auto club on the occasion of its 50th anniversary in 1952. “Many of the problems which you have met and solved were not even in sight at the beginning of the century. Hearty congratulations and best wishes for many more years of service in the cause of highway safety.” —Dennis R. Heinze