An escape to Old Hawai‘i at Waimea Plantation Cottages

Waimea Plantation Cottages resort on Kaua‘i harks back to a slower-paced time in Hawai‘i’s history.

For many guests, staying at Kaua‘i’s Waimea Plantation Cottages is more than just stepping into a bygone era. Doing so offers them the chance to commune with their ancestors.

“Guests tell us, ‘My grandparents worked on a sugar plantation, and their house looked just like the one we’re staying in,’ ” notes Gregg Enright, the resort’s general manager. “They say, ‘I’m thrilled to be here because it makes me feel closer to them.’ We consider that a great compliment—that we’re doing a good job of preserving Hawai‘i’s plantation heritage.” 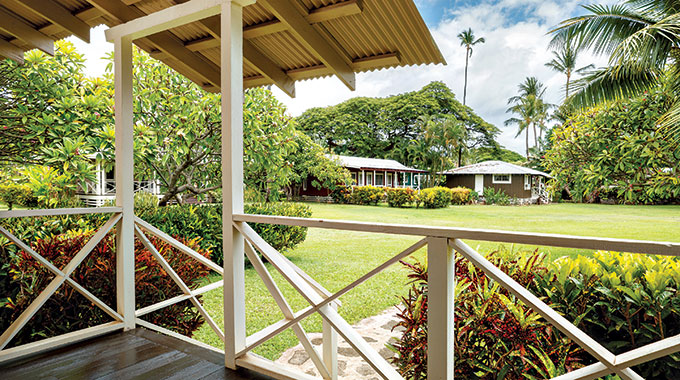 Guests can play boccie, volleyball, and other games on the resort’s expansive lawns.

Sure, the resort’s 59 authentic plantation houses offer guests modern conveniences, including Wi-Fi access, a flat-screen TV, a fully equipped kitchen, and a DVD player (a kiosk in the lobby is stocked with movie selections). But the property’s real appeal is its ability to transport visitors back in time. There are no crowds, traffic, or hubbub. It’s a quiet, unpretentious retreat that recalls an important chapter in Hawai‘i’s history.

Between the mid-1800s and early 1900s, some 400,000 immigrants—the majority from China, Japan, Korea, Portugal, Puerto Rico, and the Philippines—arrived to work on sugar plantations throughout the Islands. These new arrivals were young men and women of different races and backgrounds, drawn by the allure of Hawai‘i and bonded by a shared dream of forging a better life in a new land.

Many of them stayed after fulfilling their contracts, creating the melting pot that now defines the state’s population. When they intermarried, they blended not only blood but also diverse customs, music, arts, religions, languages, and traditional foods; thus, “local” culture today is very much an intriguing mosaic. 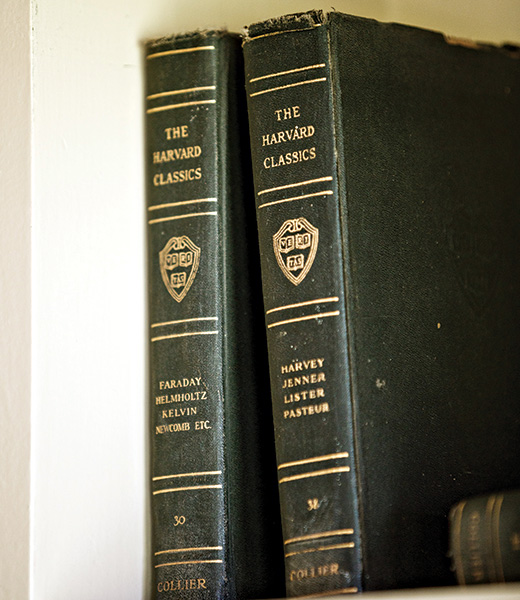 Many kama‘āina have plantation roots and are rightly proud of it. Retired civil engineer James Yamauchi, 86, for example, grew up in a camp that Kahuku Plantation Company built in Lāi‘e to house its workers. His father and mother, Yoki and Uto Yamauchi, immigrated to O‘ahu from Yonabaru, Okinawa, in 1911.

Yamauchi doesn’t know where his dad was first employed, but by the time he was a year old, in 1936, Yoki was a field worker for Kahuku Sugar and the family was living in a three-bedroom plantation house near what is now the Polynesian Cultural Center and Brigham Young University, Hawai‘i.

Back then, there was a spring-fed pond near the temple of the Church of Jesus Christ of Latter-day Saints. Kahuku Sugar pumped water from it to irrigate its 4,000 acres of cane fields, which stretched 20 miles from Waimea Bay to Kahana Bay on O‘ahu’s North Shore.

“That was the swimming pool for the plantation kids,” Yamauchi says. “We also played softball, baseball, and marbles in the park next to Lāi‘e Elementary School. Our toys included pistols made with clothespins and slingshots made of guava branches and bicycle tubes. Sugarcane was growing all around the camp houses, and we liked to chew on the raw stalks. It was really sweet; it was our candy. Maybe kids nowadays would find plantation life boring, but for us, it was a peaceful, happy time.” 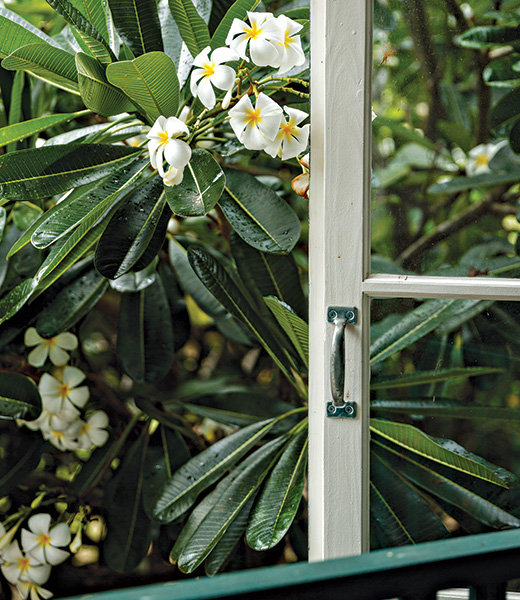 Which brings us back to Waimea Plantation Cottages. The resort was conceived during a not-so-tranquil period. In 1982, the board of Kīkīaola Land Company was considering a master plan to develop 700 of its acres in Waimea, including a 43-acre oceanfront parcel designated for a resort comprising real plantation houses, dozens of which remained in West Kaua‘i. Built with simple single-wall, board-and-batten construction, the houses stood on wood post-and-pier foundations and had been easy and inexpensive to build.

When Hurricane ‘Iwa hit Kaua‘i that year, many of the houses were badly damaged, but the resort idea remained in play: Instead of demolishing the cottages, why not salvage them, give them new purpose, and preserve an authentic part of Hawai‘i’s sugar history in the process? After all, Kīkīaola executives reasoned, their company traces its roots to Waimea Sugar Mill Company, which was acquired share by share from 1900 to 1915 by Hans Peter Faye, a Norwegian immigrant who was instrumental in developing the sugar industry in West Kaua‘i.

Loans were secured, and construction permits were approved. In 1983, the first houses were gutted on the resort’s seaside site. Floor plans had to be altered, primarily because the original bedrooms were too small to meet the expectations of contemporary travelers. 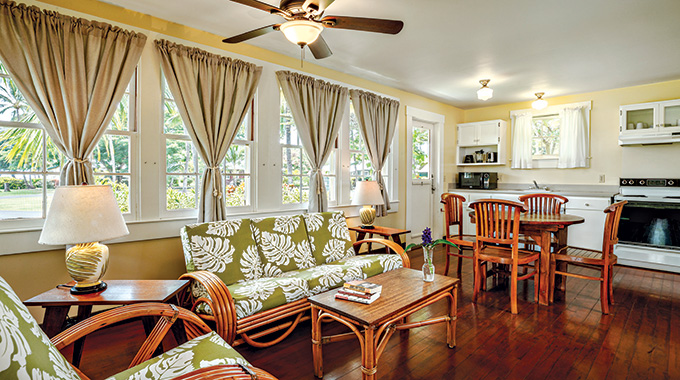 Each cottage is unique in look and layout and incorporates vintage Hawaiian touches such as wood, bamboo, rattan, and tropical prints.

Modern appliances, plumbing, and electrical systems were installed, along with furniture and fixtures that reflected the cottages’ mid-1880s to late 1930s time period. The design team matched exterior paint colors of the era—dark brown, dark green, battleship gray, and iron oxide red. It was painstaking work.

Waimea Plantation Cottages opened in 1986 with 13 houses. Additional cottages were subsequently moved and rebuilt—up to 10 each year through 1996, most from camps at Waimea Sugar Mill Company and Kekaha Sugar Company, which Faye had once partially owned. Further strengthening their nostalgic connection, many of the cottages display plaques inscribed with the names of the families who had lived in them. 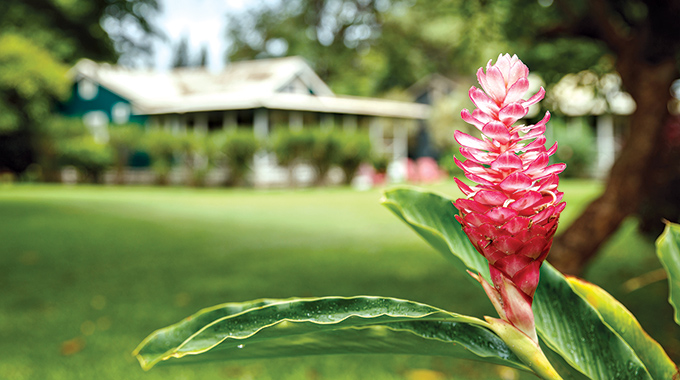 Red ginger and other tropical blooms grace the resort grounds.

Today, guests find an abundance of tropical greenery, including beach naupaka; bird-of-paradise; and banyan, star fruit, macadamia, and hala trees. Interior decor is casual and comfortable with vintage Hawaiian touches (wood, bamboo, and rattan with tropical prints), and each cottage is unique in terms of look and layout. Some of the furniture came from local plantation families and from dealers specializing in turn-of-the-last-century koa wood. Among the collectibles adding to the homey atmosphere are wooden washboards, glass milk bottles, and hand-cranked coffee grinders.

The resort doesn’t have a spa, golf course, gourmet dining, or mega swimming pool with slides, hot tubs, and swim-up bars. So, what can guests do there besides time travel?

Plenty. For starters, there’s splashing in the oceanfront swimming pool; hunting for shells and driftwood on a 2-mile black-sand beach; and playing volleyball, shuffleboard, boccie, and board games. ‘Ohana activities can also include a barbecue: Ishihara Market in Waimea town a half mile away has all the ingredients that are needed, including a selection of marinated meats. Grills can be delivered to cottages or guests can snare one of the three barbecue stations on the property (two have picnic tables). 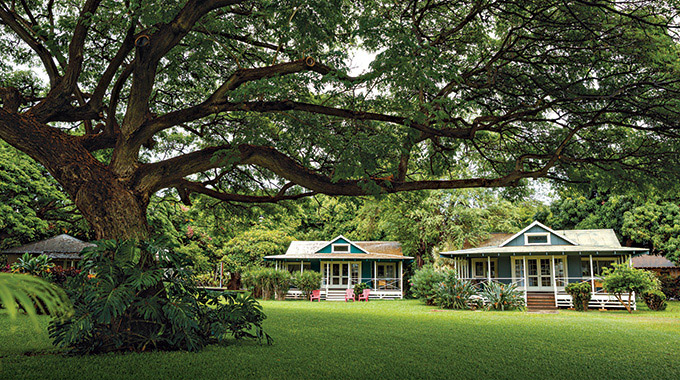 Visitors can also stroll the picturesque grounds, lie in a hammock with a book, or snooze in the shade of a monkeypod tree. More than any other Hawai‘i resort, time stands still at Waimea Plantation Cottages.

The building housing the reception area and gift shop is especially notable. Named Kumuma‘o for a nearby spring, it was constructed around 1884 as Faye’s home. In its original site, surrounded by the cane fields of Kekaha Sugar Company, it was a filming location for the 1983 television miniseries The Thorn Birds, starring Richard Chamberlain and Rachel Ward.

History buffs will no doubt love those tidbits, but the resort also appeals to couples seeking seclusion, families wanting to reconnect, and travelers looking for a relaxing getaway.

“Our everyday lives tend to be hectic and stressful,” General Manager Enright says. “Waimea Plantation Cottages is the antidote. The ambience is laid-back and low-key. You can totally unplug from that busy-ness and not only glimpse what life on a Hawaiian sugar plantation was like over a century ago, you can enjoy it.”

Waimea Plantation Cottages resort is a convenient jumping-off point for memorable Kaua‘i adventures, including hiking at Waimea Canyon and Kōke‘e state parks and boat tours to the magnificent Nā Pali sea cliffs. Nightly rates begin at $306, plus a $30 daily resort fee, which covers parking, local and mainland calls, and use of the guest laundry. (808) 338-1625.

Cheryl Chee Tsutsumi’s maternal great-grandfather, Chun Lin Hung, immigrated to Hawai‘i from Kwangtung, China, around 1877 to seek his fortune. He worked as an overseer at Grove Farm sugar plantation in Līhu‘e, Kaua‘i (owner George Wilcox was a good friend), before owning and operating a rice mill and plantation in Hulē‘ia, about 4 miles away, for 30 years.