Walt Disney World is following in the footsteps of so many iconic Disney characters who overcame adversity—think Mulan, Simba, Rapunzel. After what Disney executive Bob Iger described as perhaps the toughest year in the company’s history, the resort is going all out for “the world’s most magical celebration” to kick off its golden anniversary in October.

Over the next 18 months, visitors will find special touches in the resort’s four theme parks, including dazzling lighting effects that transform several park icons into what Disney has dubbed “beacons of magic.” In addition to the host of new or refreshed attractions, guests can still enjoy the fireworks, live entertainment, and roaming characters that have always been highlights of park visits.

If you are planning to make the trek to Florida this year or next, here’s what you can expect. Before you go, check the Walt Disney World website for safety updates. 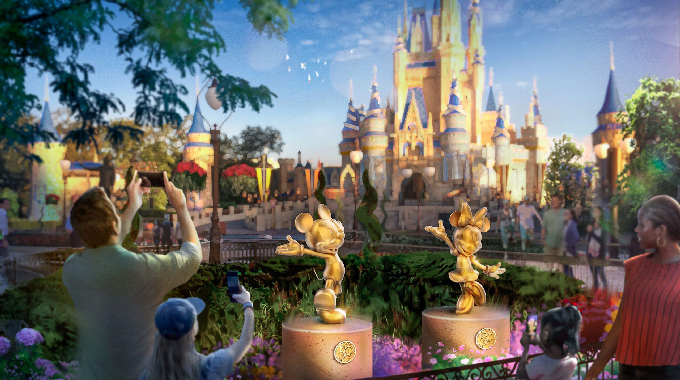 For its big 5-0 (the Magic Kingdom debuted in 1971), Disney has spiffed up a number of attractions.

Cinderella Castle got a lavish makeover with blush-pink paint, gold ribbons on the royal blue turrets, and, above the main gate, a shimmering anniversary crest.

Still under construction at press time was the Magic Kingdom’s most anticipated new ride, Tron Lightcycle/Run—a fast-launch, indoor-outdoor roller coaster based on the Tron movies. 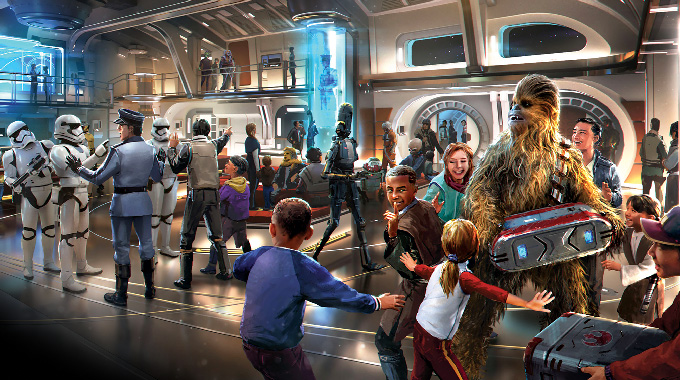 This park recently underwent a transformation that began in 2018 with the opening of Toy Story Land, which includes such rides as Slinky Dog Dash (a twisting, bouncing coaster) and Alien Swirling Saucers, which sends guests spinning through a galactic play set in a rocket ship.

In 2019, Disney unveiled Star Wars: Galaxy’s Edge, one of its most epic projects to date. The immersive land introduces guests to the planet of Batuu and features two major attractions: Rise of the Resistance, which leads guests through a multi-scene preshow before sending them on a spectacular escape journey; and Millennium Falcon: Smuggler’s Run, which puts visitors in the famed cockpit for an interactive mission.

Serious Star Wars fans should stay tuned for Disney’s Galactic Starcruiser, an immersive, two-night hotel experience scheduled to launch in 2022. Hotel guests will be transported to the starcruiser Halcyon for an interactive adventure that includes character encounters, lightsaber training, and dining in the supper club. 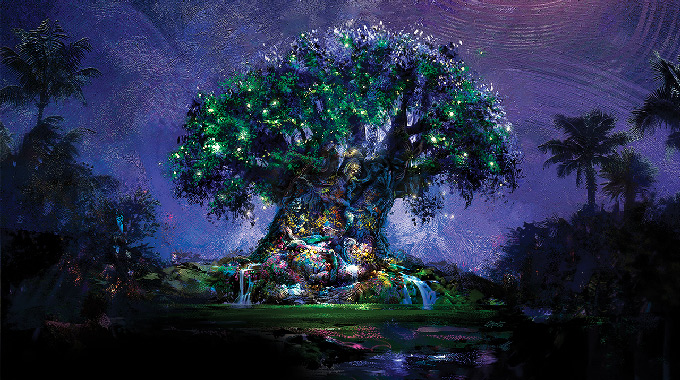 The Tree of Life at night. | Artist's rendering courtesy Disney

Sprawled across more than 500 verdant acres, Animal Kingdom celebrates the natural world and our relationship to it through live-animal exhibits, pop-up music and dance performances, theatrical productions, educational experiences, and attractions.

In 2017, Disney wowed guests with Pandora—the World of Avatar, a stunning land inspired by James Cameron’s sci-fi film, complete with floating mountains and whimsical, fictional flora interspersed with bridges and pathways. Flight of Passage, the land’s centerpiece, takes guests on a breathtaking ride on the back of a seemingly living, breathing creature called a banshee.

And no guest should leave the park without experiencing the Na’vi River Journey, a boat ride through an enchanting, bioluminescent forest to see the Shaman of Songs.

Walt Disney imagined that Epcot would “always be in a state of becoming.” In keeping with that vision, Disney kicked off a massive revitalization in early 2020 that will transform an outdated Future World into three new neighborhoods: World Nature, World Discovery, and World Celebration. Together with World Showcase, they will spotlight human creativity and scientific progress while celebrating the world’s diverse cultures. Here are a few highlights:

World Showcase: Circle-Vision’s 360-degree film about Canada, which premiered in January, with narration by Schitt’s Creek actors Catherine O’Hara and Eugene Levy; and Remy’s Ratatouille Adventure ride, which shrinks guests to the size of a rat for a frenetic journey through Gusteau’s restaurant.