At the end of Zzyzx Road

On your way to Las Vegas? Take a detour off I-15 to visit a desert outpost with a quirky name and dubious history.

The quirky road sign on Interstate15 two hours outside of Las Vegas has likely caught many a motorist’s attention: Zzyzx Road. Is it a town? An attraction? A typo?

For about three decades, from the mid-1940s to the mid-1970s, the folks who headed down the narrow, rural road were men and women seeking physical and spiritual renewal at the Zzyzx Mineral Springs and Health Resort. Today, most people who take Exit 239 are field researchers, instructors, and students seeking insight into the Mojave National Preserve and its inhabitants. Turns out, the area is rich in more than body and mind renewal: It boasts more than 50 bird species, an endangered fish species (Mohave tui chub), and a complex topography.

At first glance, the collection of bare-bones, low concrete buildings at the end of the road might look abandoned, even haunted, as some bloggers and Instagrammers have alluded. “Don’t believe everything you read online,” says Jason Wallace, site manager of the 1,200-acre compound that makes up the Cal State University Desert Studies Center. Student volunteers refurbished the structures in 1979, and today Zzyzx (pronounced “Zye-Zex,” like Isaac) serves as base camp for biologists, geologists, geomorphologists, and other scientists who conduct research or teach classes. Up to 3,000 guests, including students and researchers, come through the center each year.

Wallace, a herpetologist, teaches a reptiles course through the UC Riverside extension program. His students typically arrive on a Friday afternoon. They’ll receive a snack and an overview of the weekend, along with an introductory lecture on the region’s reptiles. Over the next couple of days, the group will take several drives into the preserve to observe reptiles, including a trip after dark to find snakes. “The roads are warm then, so the snakes like to come out then to sit on the blacktop,” Wallace says.

Other instructors teach classes on such topics as the spring and fall bird migrations, flint knapping, desert insects, and even desert literature.

“I’ve been collecting long-term data,” says Wallace. “Having an established and protected area allows researchers to look at long-term data sets. The plots will be protected longer because they are in the national park, and our facility helps support them. You can get long-term data elsewhere, but it might be more difficult.” 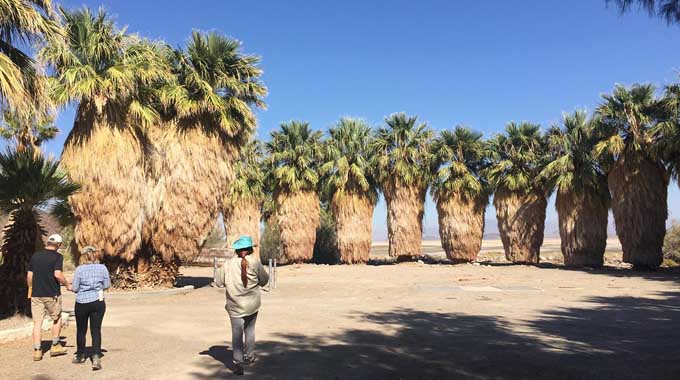 Getting in the Last Word

At some point during their stay, guests will learn the bizarre history of Zzyzx (previously known as Soda Springs). Radio evangelist Curtis Howe Springer, who was notorious for having to get in the last word, reputedly came up with Zzyzx in 1944, claiming it to be the last word in the English language. Labeled “The Last Shaman of the Desert,” Springer drew on his preaching skills to lure SoCal socialites to his high-class desert resort for renewal—externally, internally, and eternally.

Springer promoted a slew of useless health products, some of which were produced in Zzyzx, such as “Antediluvian Herb Tea,” a botanical laxative; “Mo-Hair,” to cure baldness; and “O-M-R,” a one-minute relief for indigestion. Gullible guests swore by these remedies, and their patronage kept the resort at its maximum capacity of 100 well into the 1960s. The highlight of these visits was a soak in the healing “natural hot springs”—which were actually heated by hidden propane tanks. Despite his charisma, Springer’s quackery was eventually exposed, and the Bureau of Land Management shut down the resort in 1974 for tax evasion.

Today, curiosity-seekers who pull on to Zzyzx Road will drive 4.5 miles on a partially paved road, passing a man-made pond lined with palm trees along the way. A street named Boulevard of Dreams leads into the resort and ends at a 1950s-constructed fountain named Enrico Caruso Island after the Italian opera star. The original resort buildings now house classrooms and dorms with showers. When groups are on-site, a caterer comes to the facility to prepare meals. Aside from having to provide their own power source and pump and purify their own drinking water, “We pretty much have everything a university has but on a smaller scale,” says Wallace.

Depending on the day, the site might be busy with guests or fairly empty, but Desert Studies Center staff is always present. Wallace wants to make sure people know this place is anything but abandoned: “An issue we have is that people who think it’s abandoned treat it as such and they walk away with artifacts. Visitors are welcome to wander the grounds, but when they’re here, they should treat it like a campus.”

Visitors are welcome year-round during daylight hours. From Interstate 15,  take Exit 239 and drive 4.5 miles to the end of the road. Park in the National Park Service lot outside the main swing gate and walk into the compound. A bathroom, a picnic table, and informational signs are on-site. Plan to spend about 15 minutes strolling around. Overnight stays can be arranged only through the Extended Education program. The best times to visit are in the spring (a chance to see wildflowers) and fall.

Find other fun spots to break up your journey—pick up a free Las Vegas Road Trip Quick Guide map at your local branch.

Justine Espersen is a freelance writer based in Las Vegas. Leslie Mieko Yap, Westways editor in chief, contributed to this story.