I grew up in Chicago, where snowfall was an annual event that was both welcome (snowball fights, snow angels, snow days) and tolerated (shoveling, slushy streets, disheveled hair under knit caps).

When I moved to Southern California, I was surprised to discover that the closest some locals had come to experiencing snow was the magical flakes that fell at Disneyland during the holiday fireworks show. I recall taking my son’s grade-school friend to Big Bear and seeing the big smile on his red-cheeked face as he threw his first snowball—at me.

While snowcapped mountains are visible from cities throughout Southern California, you can do more than just admire the fluffy white stuff from afar. The charming mountain town of Wrightwood (population: less than 5,000) nestled in the San Gabriel Mountains offers several ways to enjoy the snow—even if you’re not a skier or snowboarder. And getting to the snow is easier than you might think.

Unlike other nearby mountain towns, such as Big Bear and Lake Arrowhead, that require navigating a windy road with steep drop-offs, Wrightwood is accessible via a gently sloping mountain road. Located just 15 miles off Interstate 15, it’s been described as the easiest mountain drive in Southern California. “I live in San Diego, and it takes me just two hours to get there,” says Patrick Pierce, a spokesperson for Wrightwood's Mountain High, which bills itself as Southern California’s closest winter resort. “When you get off the freeway right around San Bernardino, you’re already at 4,000 feet elevation [Wrightwood is at 6,000 feet]. Less time driving means more time on the mountain.”Here are a few fun ways to enjoy Wrightwood in winter. 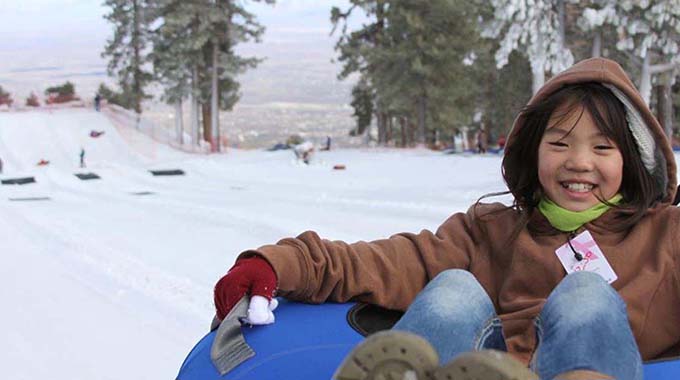 Play in the Snow

When it snows, locals brace themselves for the throngs of snow-seekers who drive up the mountain and park their cars on the side of the road (State Highway 2) to play in the snow. Not only does this slow the drive for other motorists going up and down, but it’s also dangerous, especially on weekends when it gets crowded and people are darting in and out of cars.

“We knew people were coming up the mountain anyway when it snows, so we said, ‘Let’s give them a safe setting where they can play,’” says John McColly, Mountain High vice president of sales and marketing.

Mountain High recently opened two new snow-play areas called Yeti’s Snow Parks, one at the East Resort and the other at the North Resort (the resort has three mountains). Each park features 15 tubing lanes (guests must be 36 inches or taller), a snow-play zone, and a lesson area. Nearby are lodges, where guests can warm up and get a bite to eat. And unlike the elusive abominable snowman, the resort’s mascot, Yeti, will be roving the park.

In the lesson area, newbies can try skiing and snowboarding with the help of instructors. Beginners learn basics such as how to put on skis, sidestep, traverse, and most useful, how to pick yourself up when you fall. And if guests decide they like those sports, they can receive a coupon for a discount on their next lesson package at the resort. Who knows who might be the next Maddie Mastro or Chloe Kim, two locals who trained at Mountain High and competed in the 2018 Winter Olympics?

“The snow park is an ideal place to introduce families to the sport,” says McColly. “It provides an entry point to skiing or snowboarding without the high financial, time, or travel commitment.”

And if it doesn’t snow? No problem. The resort has invested in 35 new environmentally friendly snow guns to make it. “This is the best snowmaking investment we’ve made in the past 10 years,” says Mountain High snowmaking manager Mike Childress.

Details: Yeti’s Snow Parks are open weekends and holidays beginning at 8:30 a.m. Tickets are sold in two-hour blocks at $30 for tubing, $20 for snow play, and $25 for skiing/snowboarding introductions. Guests can purchase all three activities for $59 and spend two hours in each. A free shuttle runs between all three resort areas. 888-754-7878; mthigh.com 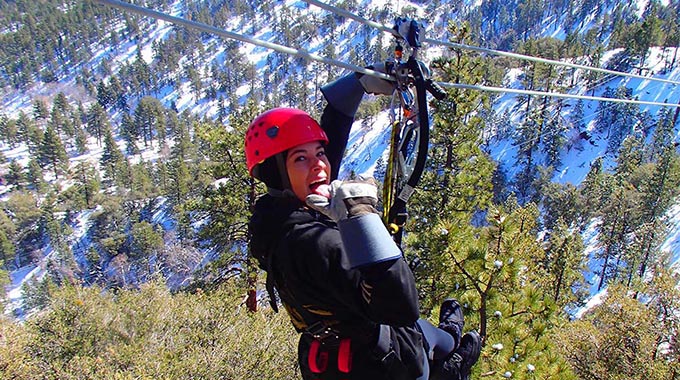 Soar Over the Snow

Zip lining is exhilarating any time you do it, but zip lining through a forest in wintertime, when snow blankets the trees and ground, provides a unique experience. It’s like soaring through a winter scene on a Christmas card.

“I love it in the snow because you are going over untouched terrain and getting to places that you really can’t get to any other way—unless you fly. It’s truly a bird’s-eye view,” says Adam Bondeson, who has the cool title of “zipliner in chief” at Ziplines at Pacific Crest in the San Gabriel Mountains. “On good snow days, you’ve got inches of snow sitting in the trees. The whole landscape looks like it’s covered in frosting.”

Even in winter, the company offers all three of its tours, ranging from a 2.5-hour tour to an all-day adventure that includes lunch. In summer, guests picnic in the forest; in winter, they might go into town to warm up and go back out. All the trips include zip-line rides; some involve crossing swaying suspension bridges and rappelling from a 90-foot-high tree platform. On the longest zip line, 1,500 feet, riders can reach speeds up to 50 mph.

The cables at Pacific Crest are jacketed, so the zip lines are quieter, says Bondeson. “Snow on the trees and the ground also absorbs sound, so the forest is hushed except for the zzzzip of the line on the cable and the chirping of birds. Animal tracks in the snow reveal the presence of wildlife, even if you can’t see them. In wide-open areas, you might even look down and see deer,” says Bondeson, who notes that bears, bobcats, ravens, and red-tailed hawks have also been spotted.

To zip line in winter, you have to dress warmly, cautions Bondeson, reciting the popular proverb: “There is no such thing as bad weather, only inappropriate gear.”

Details: Ziplines at Pacific Crest operates year-round. Zip-line tours start at $85 per person. Weight limits apply. Guests gear up at the Welcome Center at 6014 Park Drive in Wrightwood and then take a short shuttle ride to the zip-line course. 760-705-1003; ziplinespc.com 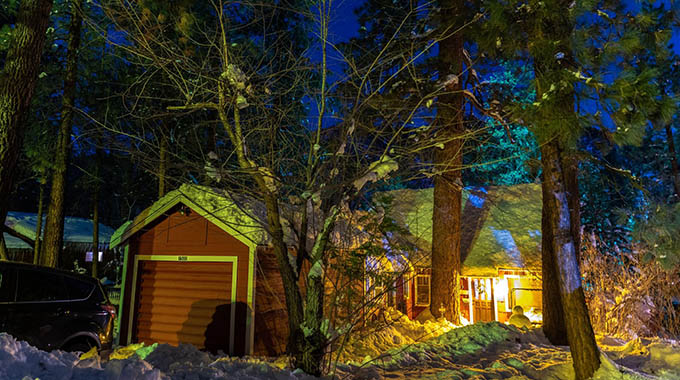 Wrightwood also has diversions for folks who simply enjoy seeing snow, but have no desire to jump in it. As with many small towns, the walkable main street, Park Drive, and other nearby roadways are lined with cute shops. Visitors can finish their holiday shopping and, when they get tired or cold, enjoy a hot coffee or cocoa, or a warm bowl of soup.

“We don’t have a McDonald’s or Starbucks, but we have Old World charm,” says local Michelle Kraeknek, who serves on the Chamber of Commerce.In 2017, Kraeknek spearheaded an effort to raise funds to professionally light the town tree, a 50-foot Jeffrey pine in Veterans Memorial Park in the center of town (just off Park Drive). The town holds an annual tree-lighting ceremony on the day after Thanksgiving, complete with caroling, hot cocoa, and hot cider.

Here are a few places recommended by Wrightwood residents:

Grizzly Café. A favorite for families, this eatery serves hearty, home-style cooking in a country-style setting. “Breakfast and lunch are my favorite here,” says Mary Sypkens, innkeeper at the Applewood Inn, who favors the Napa Valley Chicken Salad. The lobby doubles as a gift shop, where you can snag stocking stuffers. 1445 State Highway 2. 760-249-6733; grizzlycafe.com.

Village Grind. This hangout is a coffee shop by day and a wine bar by night. On certain evenings you can enjoy live music on the deck. 6020 Park Drive. 760-249-5501; facebook.com/village-grind.

GA Mercantile. Located next door to Grizzly Café, this eclectic shop sells everything you might expect in a country store, from houseware to clothing to seasonal decor. 1443 State Highway 2. 760-249-6713.

Applewood Court. In this old-timey general store, candy is displayed in glass jars and other items fill wooden barrels. You’ll also find freshly made fudge and ice cream (it’s never too cold out for ice cream), as well as an array of tree ornaments and other seasonal decor to put you in a holiday mood. 1309 Evergreen Road. 760-249-6490; applewood-court.business.site.

Alice’s Vintage Cottage. Browsing the beautiful collectibles here is a like a treasure hunt for a one-of-a-kind gift for that special aunt, sister, or friend. 1255 Apple Avenue. 909-800-1687.

Mountain Hardware. This is the go-to store in Wrightwood, especially if you need to gear up with hats, gloves, boots, sleds, or other winter toys. “It’s like a mini Bass Pro Shop,” says Kraeknek. It also sells tire chains if you need a set for the trip back home. 1390 State Highway 2. 760-249-3653; mtnhardware.com.

For many Southern Californians, Wrightwood is a viable day trip due to its proximity to SoCal cities and the easy drive up the mountain. However, if you decide you want to breathe in the mountain air a little longer, here are some lodging options:

Applewood Inn. Formerly an assisted living facility, this lovely modern house has a full kitchen, a large living room with a piano and a fireplace, and multiple bedrooms, which are ideal for multiple families or friends vacationing together. You can rent one room or the entire inn. 997 Rivera Drive. Rates start at $109 per night. 760-780-1137; applewoodinnlodging.com.

Mountain High Cabins. Located just minutes from Mountain High Resort, these stylishly rustic little (and big) cabins in the woods can accommodate anywhere from one to eight guests. Rates start at $135 per night. Locations vary. stayinwrightwood.com.

Rhinestone Rose Inn and Wellness Center. This inn oozes charm, from the antiques decor to the enchanting themed rooms such as “The Angel’s Suite” and “The Hide Out.” At the inn’s spa area, guests can indulge in a sauna or a couples’ massage. Innkeeper Loretta Thompson is also happy to whip up a vegan meal upon request. Three rooms and two cabins available. Rates start at $149 per night. 5194 Lone Pine Canyon Road. 760-912-3838; therhinestonerose.com.