During COVID-19, e-bikes are being billed as an ideal pandemic activity.

“They’re the perfect social-distancing vehicle,” says Don DiCostanzo, cofounder of Fountain Valley–based Pedego, one of the largest sellers of electric bikes in the U.S. “You automatically have 3 feet in front and 3 feet in back. And it’s something you can do outdoors as a group.”

DiCostanzo has been in the e-bike business since 2007, when he opened his first Pedego shop in Newport Beach. “I’ve been waiting for a breakout year ever since,” he says. “Who knew it would come in the middle of a pandemic?”

A report from Deloitte’s Technology, Media, and Telecommunications group, a consulting company, confirms the increased interest in electric bikes. It predicts that between 2020 and 2023, more than 130 million electric bicycles will be sold globally. To put that in perspective, at the end of 2018, only 5.1 million electric vehicles (automobiles and trucks) were in use.

Throughout the pandemic, bike shops were declared an essential business, so Pedego 101 Electric Bikes in Westlake remained open, servicing customers who came in to tune up their old bikes or purchase new ones. “We’ve been incredibly busy,” says Linda Coburn, who owns the shop with her husband, John Tajiri.

“A lot of people told me the bikes were saving their sanity,” Coburn adds. “It’s something they can do outdoors, it’s considered safe, it’s fun and exercise. And they can do it with other people in their family because everyone is on the same playing field. It doesn’t matter how strong or fit you are.” 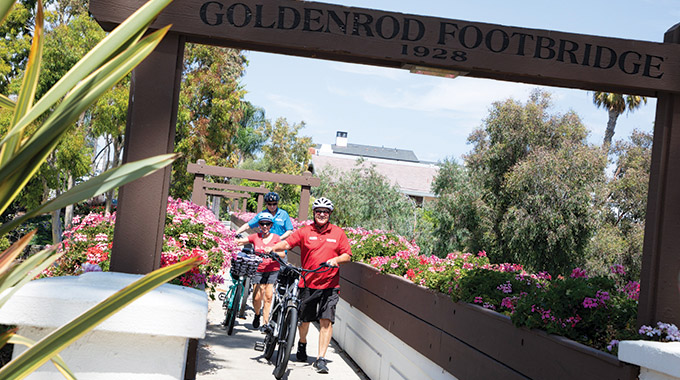 There are three classes of e-bikes, depending on motor size. With models ranging from pedal-assist to throttle-assist, and from cruisers to mountain bikes, electric bikes not only allow riders of different abilities to travel at the same speed, but they also can go longer distances together. Avid cyclists who might turn up their noses at booster bikes shouldn’t completely dismiss them, says DiCostanzo: If you were riding 20 miles a day, an electric bike will allow you to go 50 miles a day.

Where you can ride an e-bike

In October, the Department of the Interior (DOI) issued new rules regarding the use of electric bikes on federal lands. (For more details on the DOI rules, go to peopleforbikes.org.) State laws and local ordinances can vary. Previously, electric bikes were classified as motor vehicles, which limited their access to certain trail systems. The new rules define electric bicycles as bicycles—as long as they fit into one of the three classes. The rules also authorize local land managers to permit their use on non-motorized trails, giving people even more places where they can get out and ride. When riding an e-bike on a mixed-use path (if allowed), bicyclists should ride slow and cautiously when pedestrians and slower bike traffic is nearby. 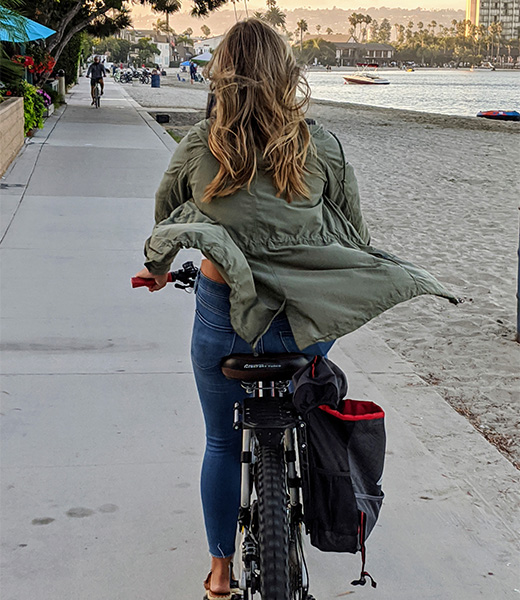 San Diego resident Max Shenk fell in love with e-bikes well before the pandemic hit. A disabled veteran who dealt with injuries to both ankles and two knee surgeries, he was looking for a way to stay fit and explore the great outdoors when he was living in Colorado. That’s when a job as a guide for an electric bike tour company introduced him to mid-drive motor e-bikes. “It was life-changing,” he says.

Today, Shenk is chief operating officer of LA Fly Rides and San Diego Fly Rides, both of which sell and repair primarily pedal-assist electric bikes. He bikes to work, to the grocery store, to restaurants, to activities. “It really is the full aspect of my life,” he says, adding that on weekends he likes to check out new neighborhoods on his e-bike. “It’s a fun, leisurely way to do it. I have freedom to roam.” An unexpected bonus of all that regular exercise is that mobility in his stiff knee dramatically improved.

Shenk is so passionate about e-bikes that he and his siblings got together to purchase one for their 68-year-old father in Massachusetts who hadn’t ridden a bike in 40 years. “It’s allowed him to bike to tennis and explore more of his property,” Shenk says.

Similarly, Cynthia Newcomb, Pedego’s director of business development, encouraged her parents in Wyoming to buy electric bikes. Her father is 77 and rides a pedal-assist model; her mother, who has Parkinson’s disease, rides the three-wheeled Trike. “It’s important for people with Parkinson’s to continue to exercise, and the Trike allows her to do that,” Newcomb says. “Now when I go visit them, we can ride together. It’s a wonderful thing.” 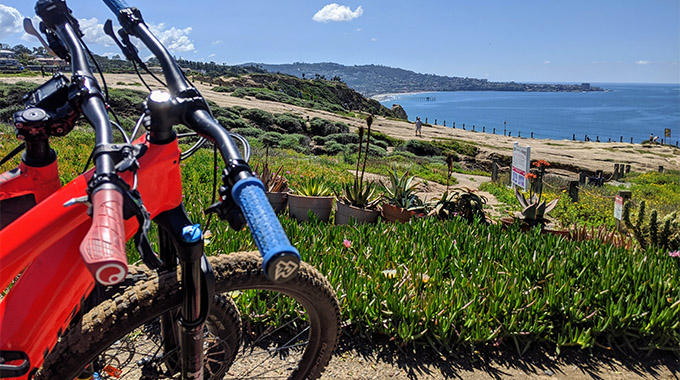 Although electric bike shops were allowed to stay open for sales and repairs during COVID-19 lockdowns, they had to stop their rental and tour business amidst safety concerns. But some shops, including the Pedego shops in La Jolla and Corona del Mar (CdM), are starting to reintroduce their rental business.

Pedego Corona del Mar also restarted its guided tours last fall. We asked the shop’s co-owner Joe Carter to share the route on which he takes his customers to illustrate just how far an average rider can go on an e-bike. The approximately 20-mile excursion highlights some of the best sights in CdM, Newport Coast, Balboa Island, and the Balboa Peninsula. The ride—which can be done with or without an electric bike, of course—may take around three hours, depending on your pace and how many stops you make. 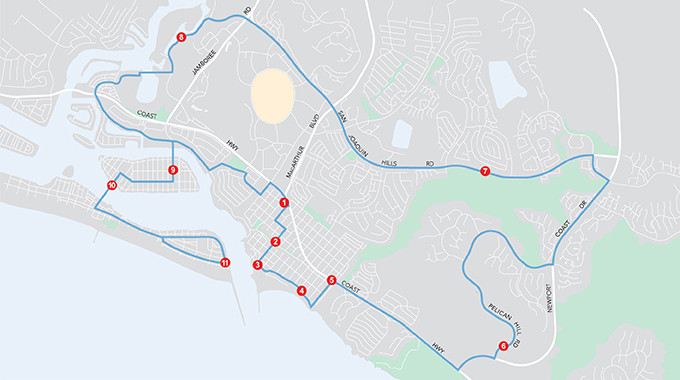 1. Fuel up at the family-run Avila’s El Ranchito Mexican Restaurant located next door to the Pedego Corona del Mar shop.

2. Cross the flower-lined 1928 Goldenrod Footbridge over Bayside Drive, a remnant of old CdM. It has been featured in paintings by artists Dan Lutz and Joan Irving Brandt, who resided adjacent to the bridge. 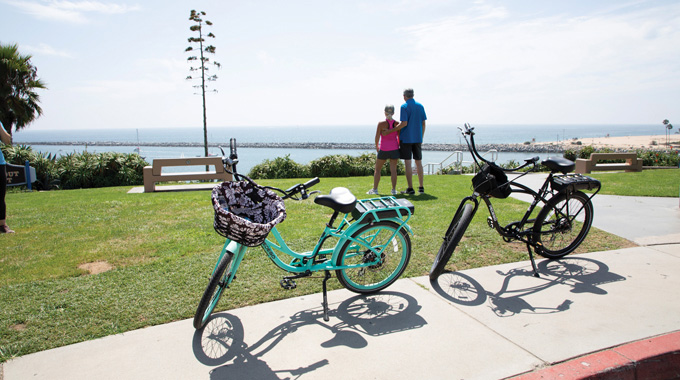 3. Stop at Lookout Point (at sunset, if possible), on a bluff above Corona del Mar State Beach.

4. Make another stop at aptly named Inspiration Point, located off Ocean Boulevard for expansive views of the Pacific Ocean and Santa Catalina Island.

5. Turn inland and ride past Five Crowns restaurant, a CdM landmark since 1965 that replicates one of England’s oldest country inns.

6. If you’re on an e-bike, the uphill ride along Newport Coast Drive to The Resort at Pelican Hill will demonstrate its climbing prowess.

7. Coast along San Joaquin Hills Road and feel the wind in your hair.

8. Ride a portion of the 10.5-mile Back Bay Loop Trail that winds around Upper Newport Bay. Refuel at Back Bay Bistro (currently scheduled to reopen in the spring) at Newport Dunes resort. 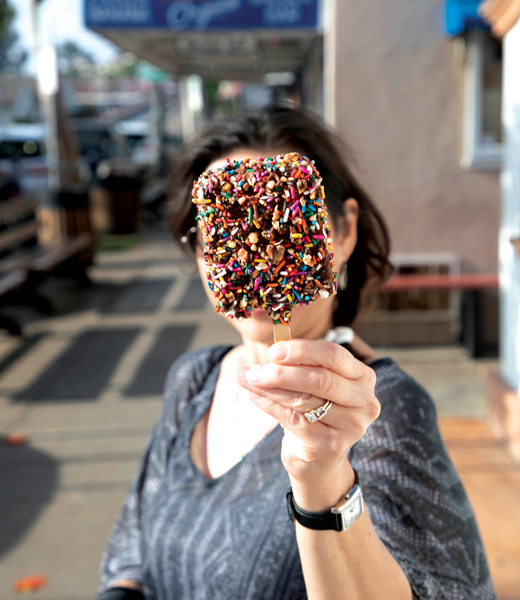 9. Crossing a bridge, you’ll arrive at Balboa Island, a charming harbor community with stylish shops, restaurants, and homes. On the main drag (Marine Avenue), make the requisite stop at Sugar ’n’ Spice for the island’s two famous desserts: the Balboa Bar and the frozen chocolate-dipped banana.

10. Board the three-car Balboa Island Ferry with your bike. The fare is $1.50 per bicyclist. During the four-minute-or-so crossing to the Balboa Peninsula, enjoy the colorful scene of boaters and stand-up paddleboarders on the water and the old-timey Ferris wheel at the Balboa Fun Zone.

11. Before turning around and heading back to the starting point, take in the surfing scene at the Wedge, so-called for its huge, wedge-shaped waves.

To learn more about electric bikes for purchase or for rent, go to: Pedegoelectricbikes.com and Shopsandiegoflyrides.com.